Synthesis, X-ray Characterization and Density Functional Theory (DFT) Studies of Two Polymorphs of the α,α,α,α, Isomer of Tetra-p-Iodophenyl Tetramethyl Calix[4]pyrrole: On the Importance of Halogen Bonds
Previous Article in Journal

Revisiting the Rearrangement of Dewar Thiophenes

Synthesis and Thermal Investigations of Eleven-Membered Ring Systems Containing One of the Heavier Group 14 Element Atoms Si, Ge, and Sn

Unique eleven-membered rings containing silicon, germanium, and tin were synthesized in good yields by the reactions of the corresponding 1,2-bis((2-bromothiophen-3-yl)methoxy)benzenes with (C6H5)2ECl2 where E = Sn, Ge, Si. The Sn and Ge congeners were crystallized, but the conformers that these rings crystallized in, were quite different. As confirmed by Density Functional Theory (DFT) calculations, (C28H22O2S2Sn) assumes a unique crystal structure that leaves more room around the tetrel atom as compared to the crystal structure of the corresponding Ge compound. In the latter, the central cavity is quite open, whereas in the former, one of the methylene groups can fold inwards. Another consequence is the influence on the planes of the aromatic rings flanking the heterocycle. In the Ge case, the benzene ring is folded away from the central cavity, whereas in the Sn case, it is almost parallel to the imaginary axis through the center of the ring. Thermal analysis investigations (TGA and DSC methods) of these eleven-membered rings suggested the loss of a phenyl group in the first decomposition step. The decomposition temperature decreased from the Si containing heterocycle to Ge and was lowest for the Sn containing heterocycle. View Full-Text
Keywords: tetrels; group 14 elements; 11-membered rings; conformation tetrels; group 14 elements; 11-membered rings; conformation
►▼ Show Figures 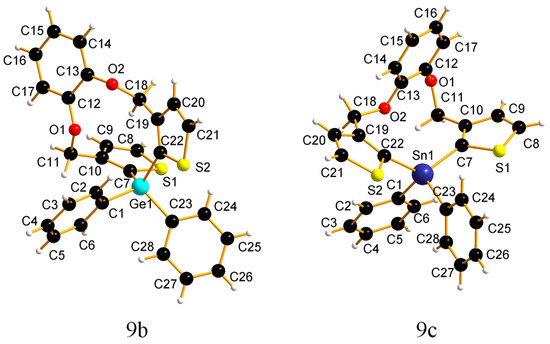