Bioaffinity capturing of molecules allows the discovery of bioactive compounds and decreases the need for various stages in the natural compound isolation process. Despite the high selectivity of this technique, the screening and identification methodology depends on the presence of a protein to capture potential ligands. However, some proteins, such as snake secretory phospholipase A2 (sPLA2), have never been investigated using this approach. The purpose of this study was to evaluate the use of a new method for screening natural compounds using a bioaffinity-guided ultrafiltration method on Crotalus durissus terrificus sPLA2 followed by HPLC-MS to identify the compounds, and this method could be used to discover new anti-inflammatory compounds from the various organisms originating from biodiversity. Different extracts were selected to evaluate their ability to inhibit sPLA2 activity. The extracts were incubated with sPLA2 and the resulting mixture was ultrafiltrated to elute unbound components. The resulting compounds were identified by HPLC-MS. We identified hispidulin as one of the components present in the Moquiniastrum floribundum leaf and evaluated the ability of this isolated compound to neutralize the inflammatory activity of sPLA2 from Crotalus durissus terrificus. View Full-Text
Keywords: ultrafiltration; anti-inflammatory; natural compounds; bioaffinity ultrafiltration; anti-inflammatory; natural compounds; bioaffinity
►▼ Show Figures 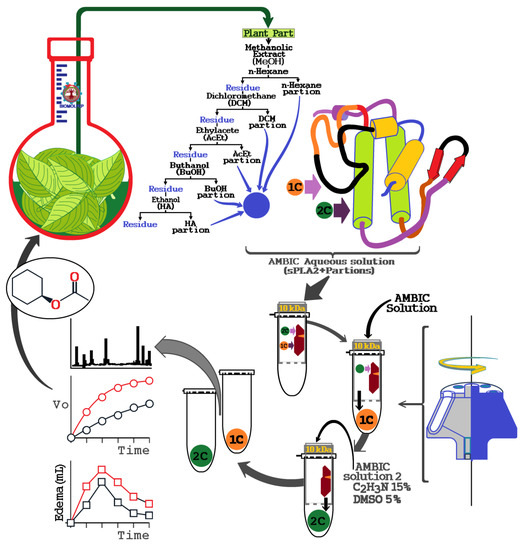