Comprehensive Evaluation of Metal Pollution in Urban Soils of a Post-Industrial City—A Case of Łódź, Poland
Next Article in Special Issue

Noncovalent Complexes of Cyclodextrin with Small Organic Molecules: Applications and Insights into Host–Guest Interactions in the Gas Phase and Condensed Phase

Consumers demand the use of eco-friendly fungicides to treat fruit and vegetables and governmental authorities have unauthorized the application of chemical antifungals for the efficient control of sour rot. In the present research, the microwave irradiation (MW) method was used to encapsulate thymol into 2-hydroxylpropyl-beta-cyclodextrin (HP-β-CD) and the effect of these HP-β-CD on controlling sour rot in citrus fruit, caused by Geotrichum citri-aurantii, was evaluated. Amounts of 25 and 50 mM of HP-β-CD-thymol were used, and compared with propiconazole, to control the decay of inoculated lemon fruit. The treatments were performed in curative and preventive experiments. The incidence and severity of Geotrichum citri-aurantii in 25 and 50 mM HP-β-CD-thymol-treated fruit were reduced in both experiments. The preventive 50 mM HP-β-CD-thymol treatment showed the best effect, reducing the sour rot, respiration rate and fruit weight loss during storage at 20 °C. HP-β-CD-thymol increased polyphenol concentration and the activity of antioxidant enzymes, such as catalase (CAT), ascorbate peroxidase (APX) and peroxidase (POD) in lemon peel, and the highest effects were found with the 50-mM dose. In conclusion, the results show that the use of thymol encapsulated by MW into HP-β-CD could be an effective and sustainable tool, a substitute to the synthetic fungicides, for G. citri-auriantii control in citrus fruit. View Full-Text
Keywords: Citrus limon; postharvest; cyclodextrin; Geotrichum citri-aurantii; incidence decay; severity decay Citrus limon; postharvest; cyclodextrin; Geotrichum citri-aurantii; incidence decay; severity decay
►▼ Show Figures 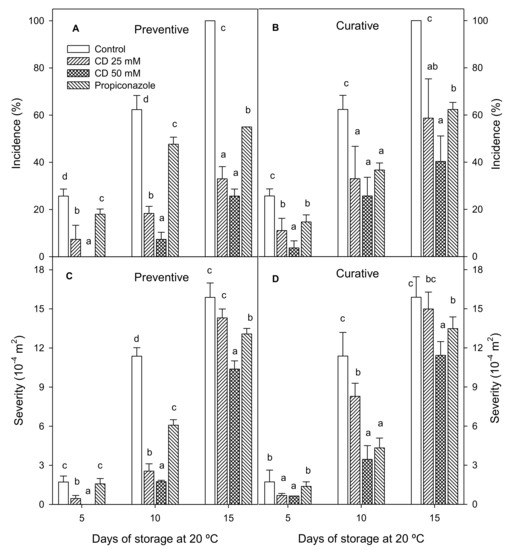