Structure and Physical Properties of Cardamonin: A Spectroscopic and Computational Approach

Sephadex® LH-20, Isolation, and Purification of Flavonoids from Plant Species: A Comprehensive Review

Flavonoids are considered one of the most diverse phenolic compounds possessing several valuable health benefits. The present study aimed at gathering all correlated reports, in which Sephadex® LH-20 (SLH) has been utilized as the final step to isolate or purify of flavonoid derivatives among all plant families. Overall, 189 flavonoids have been documented, while the majority were identified from the Asteraceae, Moraceae, and Poaceae families. Application of SLH has led to isolate 79 flavonols, 63 flavones, and 18 flavanones. Homoisoflavanoids, and proanthocyanidins have only been isolated from the Asparagaceae and Lauraceae families, respectively, while the Asteraceae was the richest in flavones possessing 22 derivatives. Six flavones, four flavonols, three homoisoflavonoids, one flavanone, a flavanol, and an isoflavanol have been isolated as the new secondary metabolites. This technique has been able to isolate quercetin from 19 plant species, along with its 31 derivatives. Pure methanol and in combination with water, chloroform, and dichloromethane have generally been used as eluents. This comprehensive review provides significant information regarding to remarkably use of SLH in isolation and purification of flavonoids from all the plant families; thus, it might be considered an appreciable guideline for further phytochemical investigation of these compounds. View Full-Text
Keywords: flavonoids; size-exclusion chromatography; Sephadex® LH-20; isolation; purification flavonoids; size-exclusion chromatography; Sephadex® LH-20; isolation; purification
►▼ Show Figures 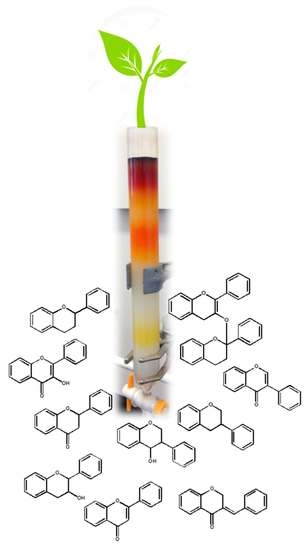