:
G-quadruplex/Hemin (G4/Hemin) complex has been widely used in biocatalysis and analytical applications. Meanwhile, compared with natural proteinous enzyme, its low catalytic activity is still limiting its applications. Even though several methods have been developed to enhance the peroxidation efficiency, the important core of the G4 design based enhancement mechanism is still indistinct. Here, we focus the mechanism study on the two most important microdomains: the iron porphyrin center and the catalytic synergy group within the 3′ flanking. These microdomains not only provide the pocket for the combination of substrate, but also offer the axial coordination for the accelerated formation of Compound I (catalytic intermediate). In order to obtain a more suitable space layout to further accelerate the catalytic process, we have used the bases within the 3′ flanking to precisely regulate the distance between microdomains. Finally, the position-dependent effect on catalytic enhancement is observed. When dC is positioned at the second-position of 3′ flanking, the newly obtained DNAzyme achieves an order of magnitude improvement compared to parent G4/Hemin in catalytic activity. The results highlight the influence of the distance between the catalytic synergy group and iron porphyrin center on the activity of DNAzyme, and provide insightful information for the design of highly active DNAzymes.
Keywords:
G-quadruplex/Hemin; DNAzyme; catalytic activity; catalytic mechanism; second-cytosine; distance regulation 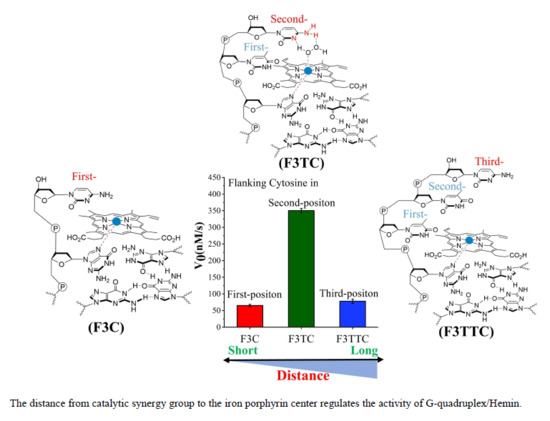 G-quadruplex (G4) is a four-stranded nucleic acid structure formed by stacked guanine tetrads [1,2,3] and it can combine with Hemin (G4/Hemin) to mimic peroxidase for catalyzing redox reaction [4,5,6]. Compared with protein peroxidases, G4/Hemin possesses several significant advantages, including high cost-efficiency ratio, excellent adaptability to harsh conditions, and chemical modification potential [7,8,9]. As a promising DNAzyme, G4/Hemin DNAzyme can efficiently catalyze H2O2-mediated oxidation with several substrates including 2,2′-azino-bis(3-ethylbenzothiazoline-6-sulfonic acid) (ABTS) [5], 3,3′,5,5′-tetramethylbenzidine sulfate (TMB) [10], luminol [11], nicotinamide adenine dinucleotide (NADH) [12], and dopamine [13]. Therefore, G4/Hemin based flexible biosensing strategies have been widely applied to detect small biomolecules, nucleic acids, proteins in vitro and even in vivo [14,15,16,17,18,19,20]. Despite the listed advantages, the biocatalytic application of G4/Hemin has been limited due to its much lower activity than horseradish peroxidase (HRP) [21]. In order to enhance the activity of G4/Hemin, different methods have been proposed. For example, some exogenous catalytic synergy agents, such as adenosine triphosphate (ATP) [22,23], DOTA-templated synthetic G-quartet (DOTASQ) [24], nitrogenous buffers [6], and spermine [25], have been used as efficient additives to boost the catalytic activity of G4/Hemin. However, these exciting results only appear along with extremely high concentrations of above additives, which is very unfriendly for related applications, especially in vivo experiments.
In recent years, several catalytic synergy group assisted G-quadruplex designs have been proposed to improve the catalytic activity. Using poly d(CCC), dA and poly dA as the flanking sequences, or changing the loop to poly dA and poly dC has been reported [26,27,28,29,30]. According to these reports, the G4-promoted oxidation of ABTS can be divided into three steps, which were presented in Figure 1A. Promoting the formation of Compound I is the important core of these activations. Figure 1B indicates the strategy that introducing proximal flanking catalytic synergy group (dA or dC) to accelerate the formation of the oxidation state of iron porphyrin (Compound I) [22]. However, it still lacks a systematic study on space layout regulation-based sequence optimization (the distance from catalytic synergy group to the iron porphyrin center). In this paper, different base combinations and distances are designed to screen highly active DNA enzymes. Finally, we found that when dC arranged on the second-position with first-position base is dT, dA or dC, the new obtained DNAzyme achieves an order of magnitude improvement in catalytic activity relative to the parent G4/Hemin system. Furthermore, our investigation also provides fundamental insights into how to design new-generation of DNAzyme with catalytic synergy group in optimal distance.

Oligonucleotides were dissolved in ultrapure water (18.2 MΩ·cm). The concentration of oligonucleotide solution was determined by UV absorbance at 260 nm using the molar extinction coefficients provided by IDT OligoAnalyzer 3.1 (http://sg.idtdna.com/calc/analyzer). The DNA solution was heated to 95 °C for 5 min, then cooled slowly to room temperature, and then stored at 4 °C overnight before use.

3.3. Preparation of Hemin and ABTS Solution

Hemin was dissolved in DMSO and diluted to 0.1 mM and then stored in the dark at 4 °C. Freshly prepared ABTS and H2O2 were dissolved in ultrapure water to 50 mM.

After the formation of G4/Hemin complexes, the substrate ABTS (0.6 mM) and H2O2 (0.6 mM) were added. Quartz cell path length was 1 cm. Catalytic activity measurement was followed by monitoring the absorbance of ABTS+ at 420 nm using a Cary100 (Agilent) spectrophotometer for 60 s using extinction coefficients of for ABTS·+ (36,000 M−1 cm−1 at 420 nm). The initial rate (V0, nM/s) of the oxidation reaction was obtained from the slope of the initial linear portion (the first 30 s) of the plot of absorbance versus reaction time. All kinetic measurements were repeated three times, and the background activity of hemin alone was subtracted.

CD spectra were collected on Chirascan circular dichroism spectropolarimeter (Applied Photophysics) in the 220–320 nm wavelength range. G4 solutions (2.5 μM strand concentration) were obtained by directly diluting the stock solutions of DNA (5 μM) into 10 mM Tris-HCl buffer (pH = 7.0, 100 mM KCl (or NaCl/NH4Cl)). The lamp was kept under a stable stream of dry purified nitrogen (99.999%) during experiments, and the measurements were repeated three times in 25 °C.

In conclusion, all the results presented here show that the peroxidase-mimicking DNAzyme activity can be regulated by the 3′ end flanking sequences with a position-dependent effect. The appropriate position of dA/dC may accelerate the formation of Compound I and then enhance the catalytic activity of G4-based DNAzyme. Our results not only provide valuable insight regarding the important role of flanking sequences of G4s on their overall catalytic efficiency, beneficial to the subsequent design of highly active enzymes, but also pave the way for further improvements, to mimic natural proteinous enzymes. Furthermore, the catalytic activity position-dependent effect and distance regulation strategy found here can be further applied to potential applications. 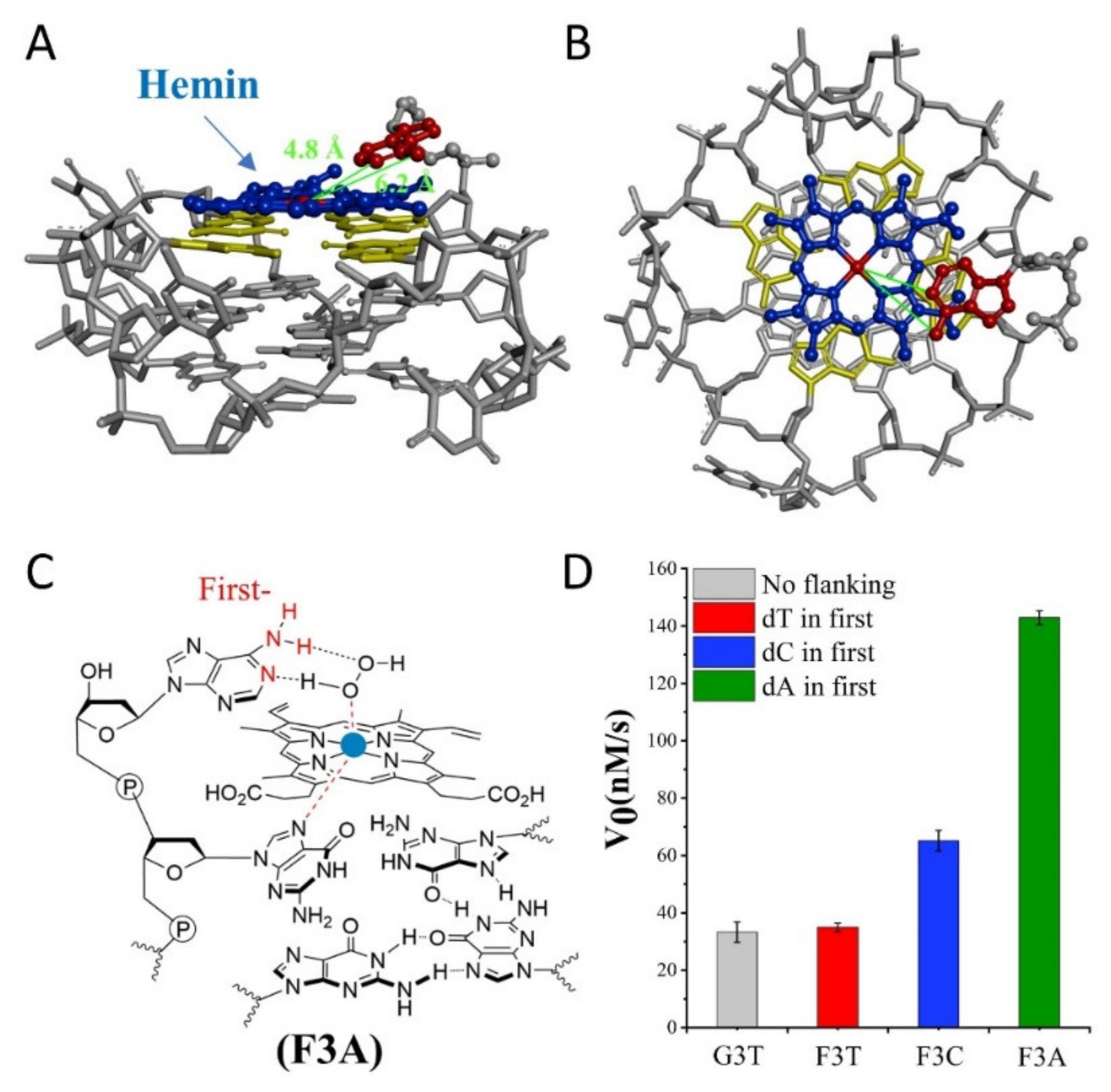 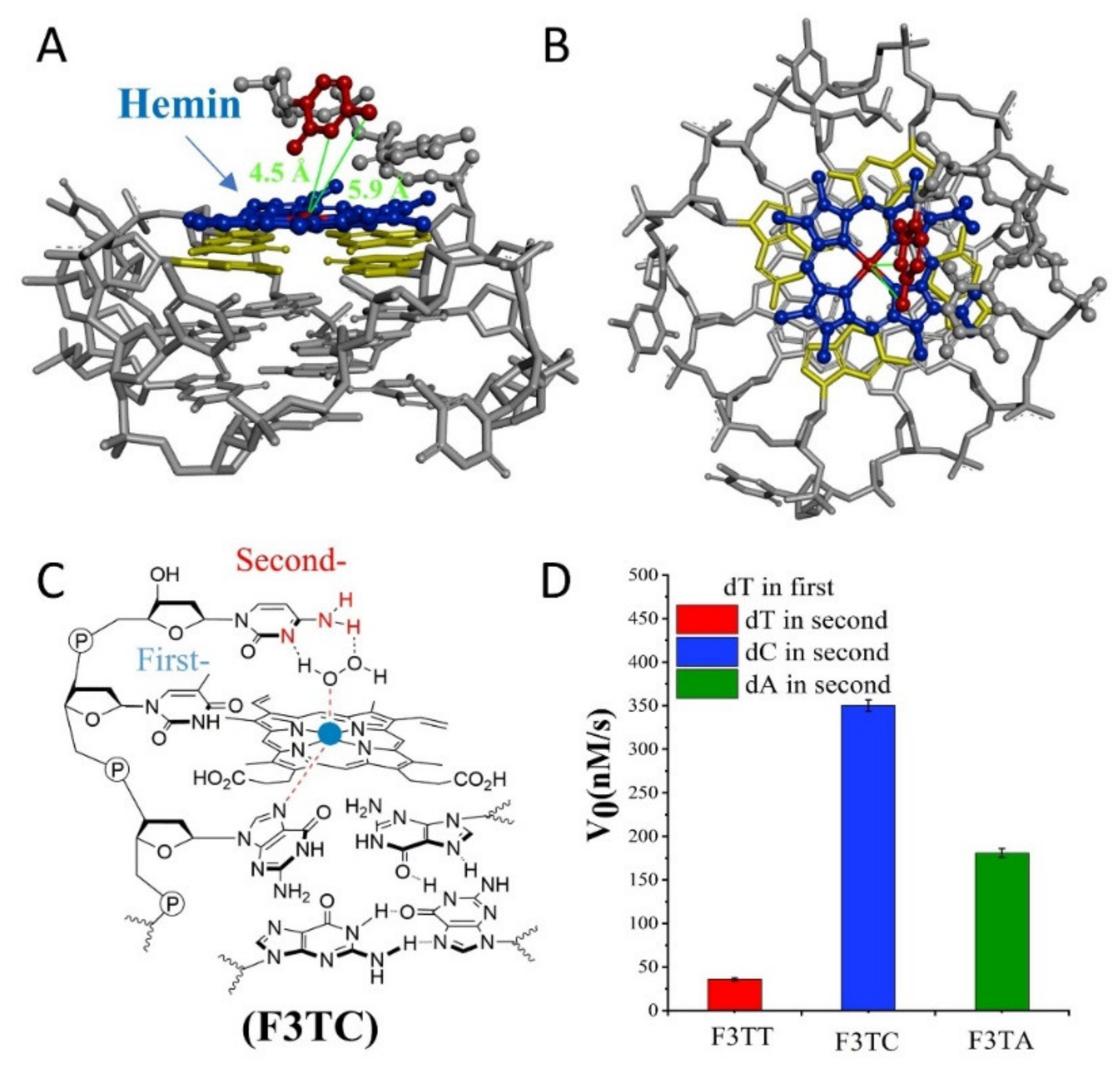 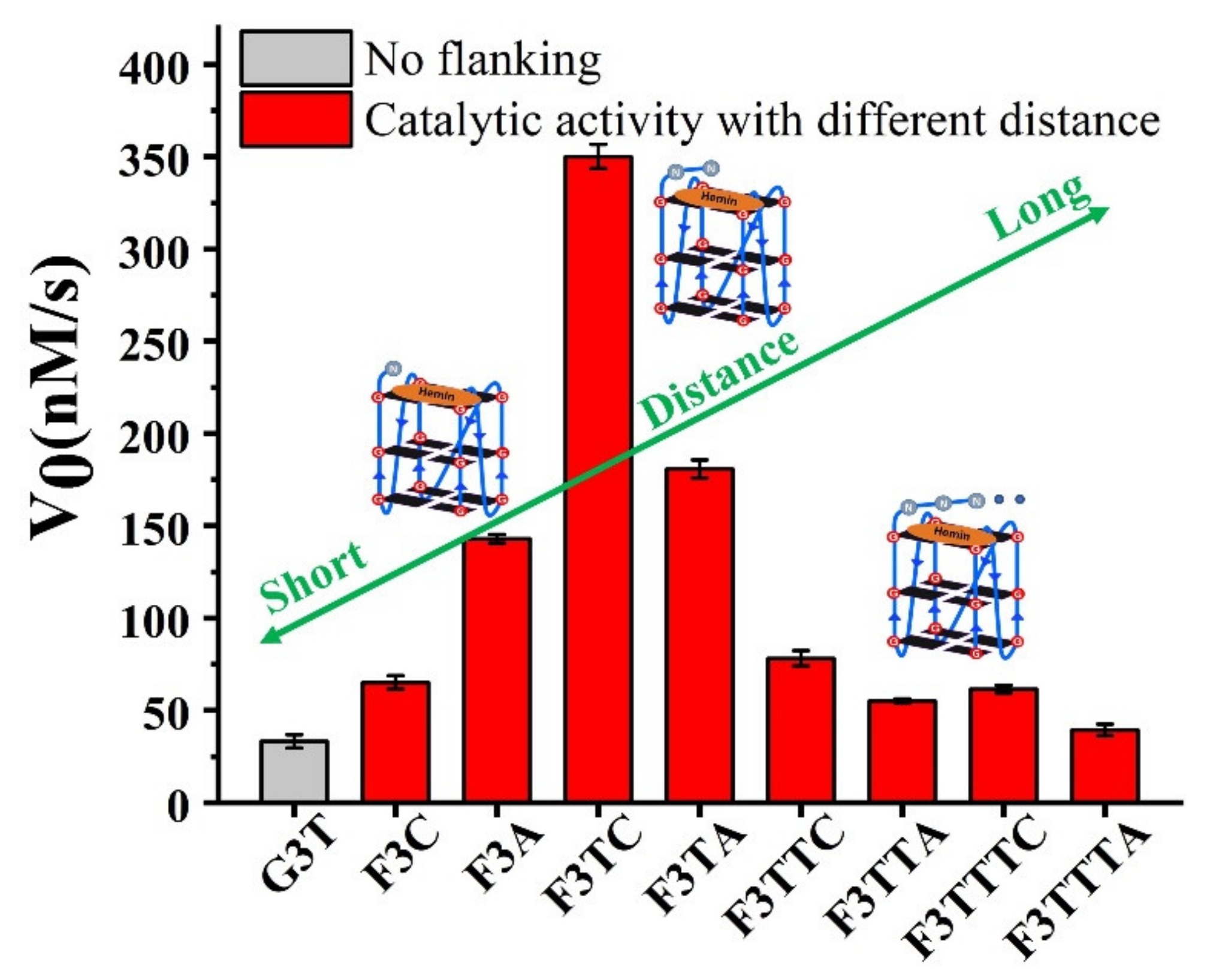 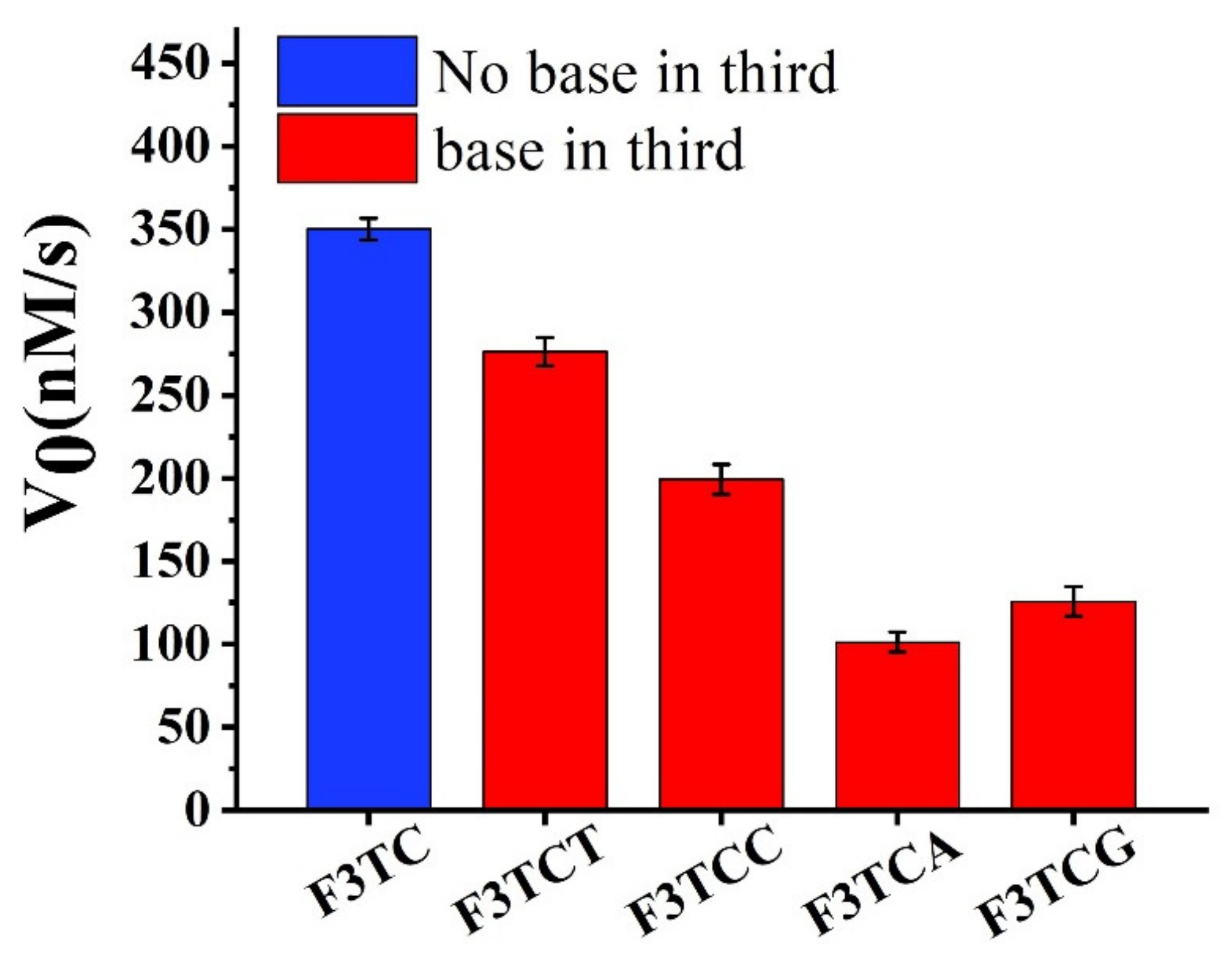