Rutamarin: Efficient Liquid–Liquid Chromatographic Isolation from Ruta graveolens L. and Evaluation of Its In Vitro and In Silico MAO-B Inhibitory Activity
Previous Article in Special Issue

Carveol is a monoterpene present in the structure of many plant products. It has a variety of biological activities: antioxidant, anticancer and vasorelaxation. However, studies investigating the effect of monoterpenoids on human vessels have not yet been described. Thus, the present study aimed to characterize the effect of (−)-carveol on human umbilical arteries (HUAs). HUA ring preparations were isolated and subjected to isometric tension recordings of umbilical artery smooth muscle contractions. (−)-Carveol exhibited a significant vasorelaxant effect on KCl and 5-HT-induced contractions, obtaining EC50 values of 344.25 ± 8.4 and 175.82 ± 4.05 µM, respectively. The participation of calcium channels in the relaxation produced by (−)-carveol was analyzed using vessels pre-incubated with (−)-carveol (2000 µM) in a calcium-free medium, where the induction of contractions was abolished. The vasorelaxant effect of (−)-carveol on HUAs was reduced by tetraethylammonium (TEA), which increased the (−)-carveol EC50 to 484.87 ± 6.55 µM. The present study revealed that (−)-carveol possesses a vasorelaxant activity in HUAs, which was dependent on the opening of calcium and potassium channels. These results pave the way for further studies involving the use of monoterpenoids for the vasodilatation of HUAs. These molecules have the potential to treat diseases such as pre-eclampsia, which is characterized by resistance in umbilical arteries. View Full-Text
Keywords: carveol; human umbilical artery; vasorelaxant carveol; human umbilical artery; vasorelaxant
►▼ Show Figures 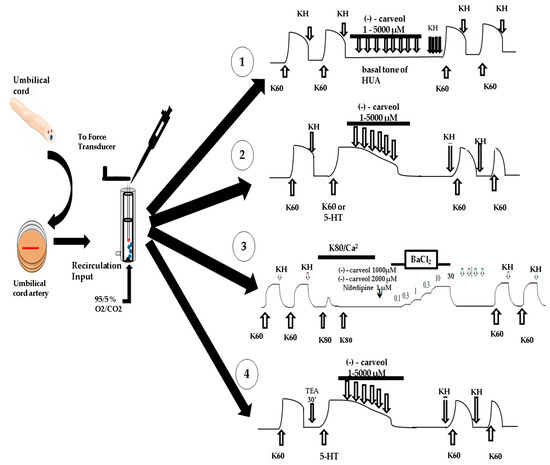