Optical Properties of Composites Based on Graphene Oxide and Polystyrene

In this work, new optical properties of composites based on polystyrene (PS) microspheres and graphene oxide (GO) are reported. The radical polymerization of styrene in the presence of benzoyl peroxide, pentane and GO induces the appearance of new ester groups in the PS macromolecular chains remarked through an increase in the absorbance of the infrared (IR) band at 1743 cm−1. The decrease in the GO concentration in the PS/GO composites mass from 5 wt.% to 0.5 wt.% induces a diminution in the intensities of the D and G Raman bands of GO simultaneous with a down-shift of the D band from 1351 to 1322 cm−1. These variations correlated with the covalent functionalization of the GO layers with PS. For the first time, the photoluminescent (PL) properties of PS/GO composites are reported. The PS microspheres are characterized by a PL band at 397 nm. Through increasing the GO sheets’ concentration in the PS/GO composite mass from 0.5 wt.% to 5 wt.%, a PS PL quenching process is reported. In addition, in the presence of ultraviolet A (UVA) light, a photo-degradation process of the PS/GO composite having the GO concentration equal to 5 wt.% is demonstrated by the PL studies. View Full-Text
Keywords: polystyrene microsphere; graphene oxide; composite; covalent functionalization polystyrene microsphere; graphene oxide; composite; covalent functionalization
►▼ Show Figures 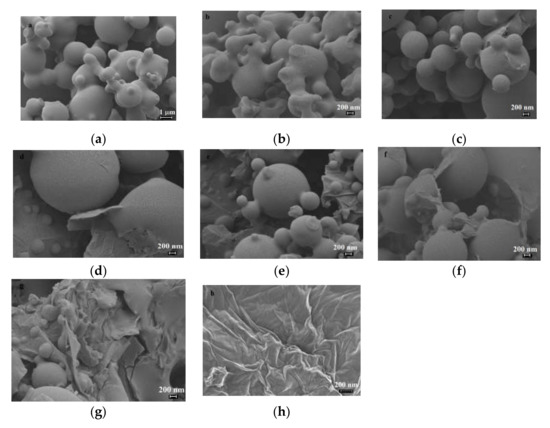