The seeds of Millettia ferruginea are used in fishing, pesticides, and folk medicine in Ethiopia. Here, the anti-cancer effects of isoflavones isolated from M. ferruginea were evaluated in human ovarian cancer cells. We found that isoflavone ferrugone and 6,7-dimethoxy-3’,4’-methylenedioxy-8-(3,3-dimethylallyl)isoflavone (DMI) had potent cytotoxic effects on human ovarian cancer cell A2780 and SKOV3. Ferrugone and DMI treatment increased the sub-G1 cell population in a dose-dependent manner in A2780 cells. The cytotoxic activity of ferrugone and DMI was associated with the induction of apoptosis, as shown by an increase in annexin V-positive cells. Z-VAD-fmk, a broad-spectrum caspase inhibitor, and z-DEVD-fmk, a caspase-3 inhibitor, significantly reversed both the ferrugone and DMI-induced apoptosis, suggesting that cell death stimulated by the isoflavones is mediated by caspase-3-dependent apoptosis. Additionally, ferrugone-induced apoptosis was found to be caspase-8-dependent, while DMI-induced apoptosis was caspase-9-dependent. Notably, DMI, but not ferrugone, increased the intracellular levels of reactive oxygen species (ROS), and antioxidant N-acetyl-L-cysteine (NAC) attenuated the pro-apoptotic activity of DMI. These data suggest that DMI induced apoptotic cell death through the intrinsic pathway via ROS production, while ferrugone stimulated the extrinsic pathway in human ovarian cancer cells. View Full-Text
Keywords: Millettia ferruginea; 6,7-dimethoxy-3’,4’-methylenedioxy-8-(3,3-dimethylallyl) isoflavone; ferrugone; apoptosis; caspase; ovarian cancer Millettia ferruginea; 6,7-dimethoxy-3’,4’-methylenedioxy-8-(3,3-dimethylallyl) isoflavone; ferrugone; apoptosis; caspase; ovarian cancer
►▼ Show Figures 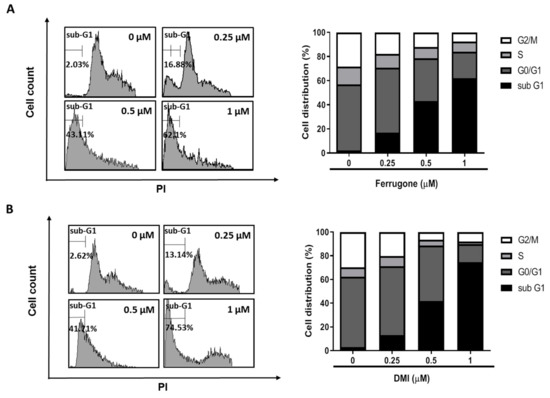