Glycerol and Q-Tubes: Green Catalyst and Technique for Synthesis of Polyfunctionally Substituted Heteroaromatics and Anilines

Synthesis of Tris-pillar[5]arene and Its Association with Phenothiazine Dye: Colorimetric Recognition of Anions

A multicyclophane with a core based on tris(2-aminoethyl)amine (TREN) linked by amide spacers to three fragments of pillar[5]arene was synthesized. The choice of the tris-amide core allowed the multicyclophane to bind to anion guests. The presence of three terminal pillar[5]arene units provides the possibility of effectively binding the colorimetric probe N-phenyl-3-(phenylimino)-3H-phenothiazin-7-amine (PhTz). It was established that the multicyclophane complexed PhTz in chloroform with a 1:1 stoichiometry (lgKa = 5.2 ± 0.1), absorbing at 650 nm. The proposed structure of the complex was confirmed by 1H-NMR spectroscopy: the amide group linking the pillar[5]arene to the TREN core forms a hydrogen bond with the PhTz imino-group while the pillararenes surround PhTz. It was established that the PhTz:tris-pillar[5]arene complex could be used as a colorimetric probe for fluoride, acetate, and dihydrogen phosphate anions due to the anion binding with proton donating amide groups which displaced the PhTz probe. Dye displacement resulted in a color change from blue to pink, lowering the absorption band at 650 nm and increasing that at 533 nm. View Full-Text
Keywords: pillar[5]arene; complex; phenothiazine; anion; multipillar[5]arene pillar[5]arene; complex; phenothiazine; anion; multipillar[5]arene
►▼ Show Figures 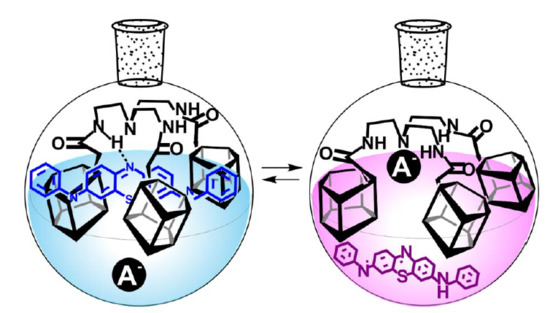