Synthesis, Biological Evaluation and Docking Studies of 13-Epimeric 10-fluoro- and 10-Chloroestra-1,4-dien-3-ones as Potential Aromatase Inhibitors
Next Article in Special Issue

Facile and Efficient Syntheses of (11Z,13Z)-Hexadecadienal and Its Derivatives: Key Sex Pheromone and Attractant Components of Notodontidae

Globally, the incidence and mortality rates of cardiovascular diseases remain very high [1]. Atherosclerosis (AS) is an important contributor towards the development cardiovascular and cerebrovascular diseases, whilst endothelial cell (EC) dysfunction plays a crucial role in the development of AS, since the overexpression of adhesion molecules and the release of inflammatory factors promote the formation of foam cells from macrophages [2]. Many studies have shown that oxidative stress is an important factor in EC dysfunction, as reactive oxygen species are small signaling molecules that play important roles in the regulation of biological processes and cellular functions [3]. When intracellular reactive oxygen species levels exceed the cell tolerance limit, the excess reactive oxygen species attack the mitochondrial membrane, leading to mitochondrial dysfunction and EC dysfunction [4,5]. Therefore, the mechanisms of oxidative stress-induced EC dysfunction urgently require further study.
Simvastatin is a common hypolipidemic drug that inhibits hydroxymethylglutaryl coenzyme A (HMG-COA) reductase activity and thus endogenous cholesterol synthesis [6]. Numerous studies have shown that simvastatin inhibits AS via various mechanisms. For example, simvastatin suppresses atherosclerotic lesion formation in ApoE KO mice by down-regulating CD36 and calpain-1, thus reducing inflammation [7]. In clinical trials, simvastatin significantly reduced the circulating levels of total cholesterol, LDL-C, VLDL-C, and LDL-C, which are considered risk factors for AS [8,9,10]. Although simvastatin is recognized for its anti-arterial AS effects, the specific mechanism underlying its effects on oxidative stress-induced EC dysfunction remains unclear.
The classical Wnt/β-catenin pathway is highly conserved and is involved in multiple physiological processes, including embryonic development and organ formation [11]. For example, knocking out the embryonic β-catenin gene in animal models has been shown to inhibit mesoderm formation [12]. Moreover, abnormal activation or inhibition of the Wnt/β-catenin pathway has been associated with the occurrence of various diseases, including cancers and Parkinson’s disease [11]. In recent years, an increasing number of reports have shown that this pathway is associated with EC dysfunction and AS [13,14]. For example, Wnt-5a protein expression was significantly up-regulated during AS development and was positively correlated with AS severity in animal experiments and human endarterectomy samples [15,16]. However, Ma et al. showed that the Wnt/β-catenin pathway can be suppressed by pigment epithelium-derived factor (PEDF), which reduces oxidative stress and endothelial injury [17]. Furthermore, our previous studies have shown that activating the Wnt/β-catenin pathway promotes H2O2-induced endothelial dysfunction [18].
The endoplasmic reticulum (ER) is an organelle found in eukaryotic cells. Hyperlipidemia, oxidative stress, and calcium imbalance can all disrupt ER homeostasis and lead to ER stress [19,20]. To restore ER homeostasis, the chaperone protein, GRP78, dissociates from PERK, IRE1, and ATF6, activating downstream signaling pathways which reduce cell inflammation and apoptosis [21,22]. ER stress is also involved in AS development; the upregulated expression of key ER stress molecules (GRP78, p-IRE1, ATF6, and CHOP) has been reported in the plaques of ApoE KO mice [23,24]. In addition, studies have shown that numerous atherogenic risk factors can activate ER stress in the initial stages of AS, thus contributing to EC dysfunction and the progression of AS [25,26].
Simvastatin, the Wnt/β-catenin pathway, and ER stress clearly affect AS development; however, the links between these factors and EC dysfunction are unclear. We hypothesized that simvastatin reduces H2O2-induced EC dysfunction via the Wnt/β-catenin pathway and ER stress. To investigate this, we treated human umbilical vein endothelial cells (HUVECs) with simvastatin and measured the subsequent levels of EC dysfunction, Wnt/β-catenin signaling, and ER stress.

2.1. Effects of Simvastatin on the Viability of HUVECs

2.6. Simvastatin Reduces the Deposition of Cholesterol in the Cytoplasm

4.3. Measurement of LDH Levels in the Medium and Intracellular SOD Activity and MDA Concentration

The LDH level in the culture medium and the intracellular SOD activity and MDA concentration can reflect EC dysfunction. After the HUVECs were treated as described above, the medium was collected from the six-well plate and its LDH level was measured using a commercially available kit. The cells from the six-well plate were digested with trypsin, collected, disrupted using ultrasound, and centrifuged at 10,000 rpm for 10 min at 4 °C. The SOD activity and MDA concentration of the resulting supernatant were measured using a commercially available kit according to the manufacturer’s instructions.

4.4. Measurement of Adhesion Ability of HUVECs to THP-1 Cells

HUVECs were cultured in 24-well plates as described above. After incubation with H2O2 for 24 h, THP-1 cells (1 × 105 cells/well) were added. After 2 h, the medium in each well was removed and unattached THP-1 cells were washed away with PBS. The number of THP-1 cells adhered to the HUVECs was counted using a microscope (magnification, ×20; Olympus IX71; Olympus Corporation, Tokyo, Japan).

To measure protein expression levels, cells were lysed and total protein was collected. Samples were then boiled in protein loading buffer at 100 °C for 5 min. Total proteins were extracted from the cells, subjected to 8–12% SDS-PAGE, and transferred to polyvinyl fluoride microporous membranes. Membranes were blocked with 5% skim milk or 5% bovine serum albumin, dissolved in Tris-buffered saline/Tween 20 (TBST) for 1 h, and incubated at 4 °C overnight with primary antibodies (human apoptosis-associated proteins Bcl-2 and Bax; adhesion-associated proteins ICAM-1, VCAM-1 and MCP-1; Wnt/β-catenin pathway-associated proteins β-catenin, phosphorylated β-catenin, LRP6, and phosphorylated LRP6; key molecules of ER stress GRP78, ATF6, and CHOP; and GAPDH) at a 1:1000 dilution. Membranes were then washed three times with TBST and incubated with a secondary antibody for 1 h at room temperature. After washing three times, an enhanced chemiluminescent reagent was added to the membrane and the blot was visualized using an autoradiography system (Chemiluminescence Imaging System; version 5.1; Bio-Rad Laboratories, Inc., Hercules, CA, USA). Each set of experiments was performed three times.

To determine the effect of simvastatin on the viability of HUVECs under oxidative stress, they were seeded onto 96-well plates at a density of 1 × 105 cells/well and cultured as described above. Next, 20 µL of MTT (5 mg/mL) was added to each well, the cells were incubated at 37 °C for 4 h, the medium was removed, and 200 µL of dimethyl sulfoxide was added to each well to dissolve the blue precipitate. The absorbance was measured at 490 nm using a microplate reader (Thermo Fisher Scientific, Inc., Waltham, MA, USA). A total of 6 wells were measured per group and the experiment was performed three times.

2.5 × 104 cells were cultured in the 24-well plate after the glass lips were added. When HUVECs reached 70% confluence in the 24-well plate, the four cell groups were treated with different drugs, as described above. The medium in each well was then removed and the cells were washed three times with PBS. After being fixed with 4% paraformaldehyde for 30 min, the cells were washed with PBS three more times, 1.5 mg/mL of glycine was added to each well, and the cells were incubated in the glycine solution for 10 min. Finally, 500 μL of Filipin (0.05 mg/mL Filipin in PBS) was added to each well, incubated for 2 h, then the fluorescence intensity of each group was observed using a fluorescence microscope (magnification, ×10; Olympus IX71). The experiment was performed three times [42].

This study was funded by grants from the National Natural Science Foundation of China (grant no. 81560151) and the Jiangxi Provincial Department of Science and Technology (grant no. 20181BAB205022). 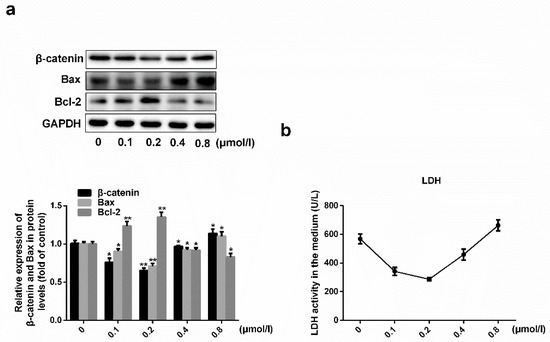 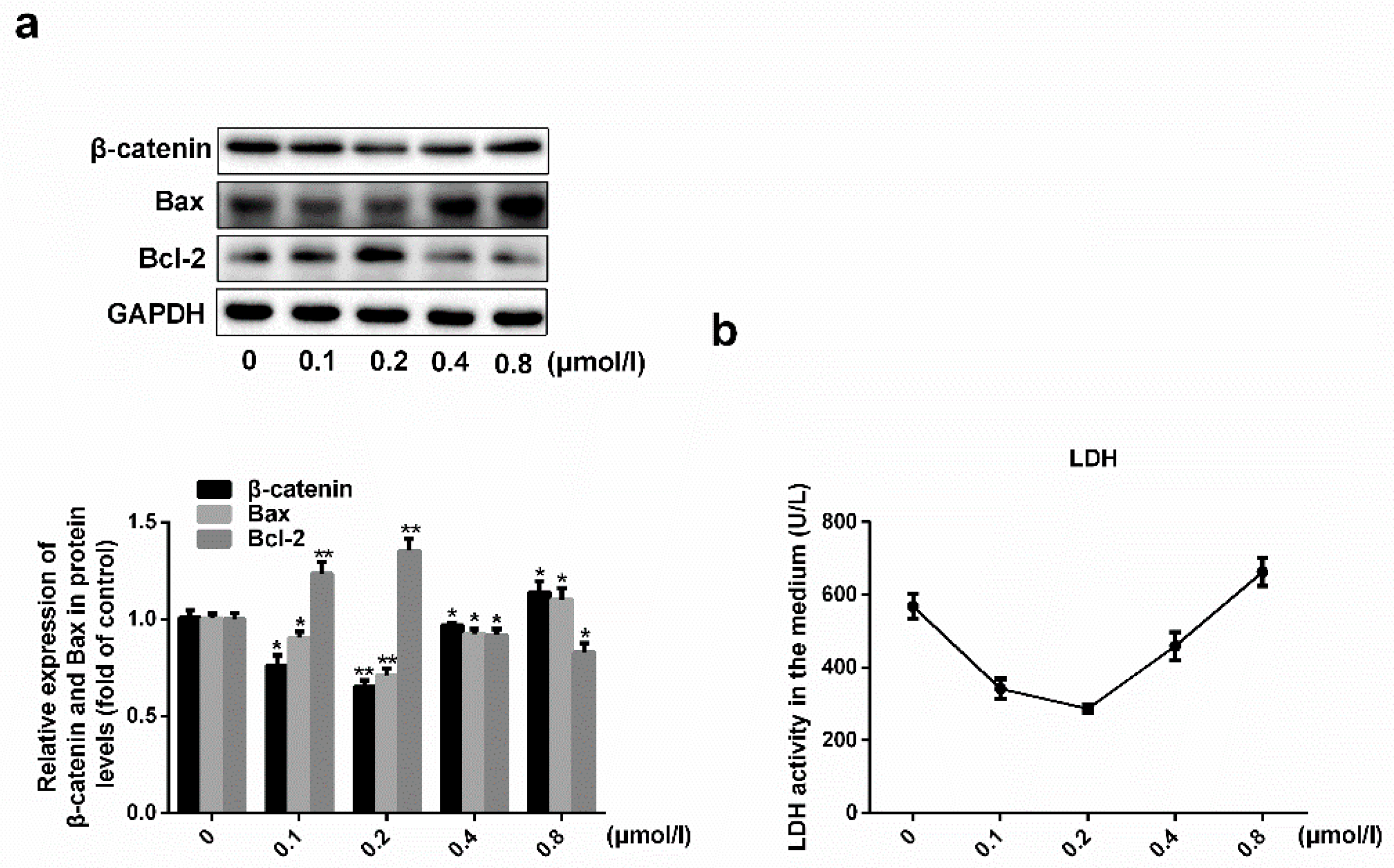 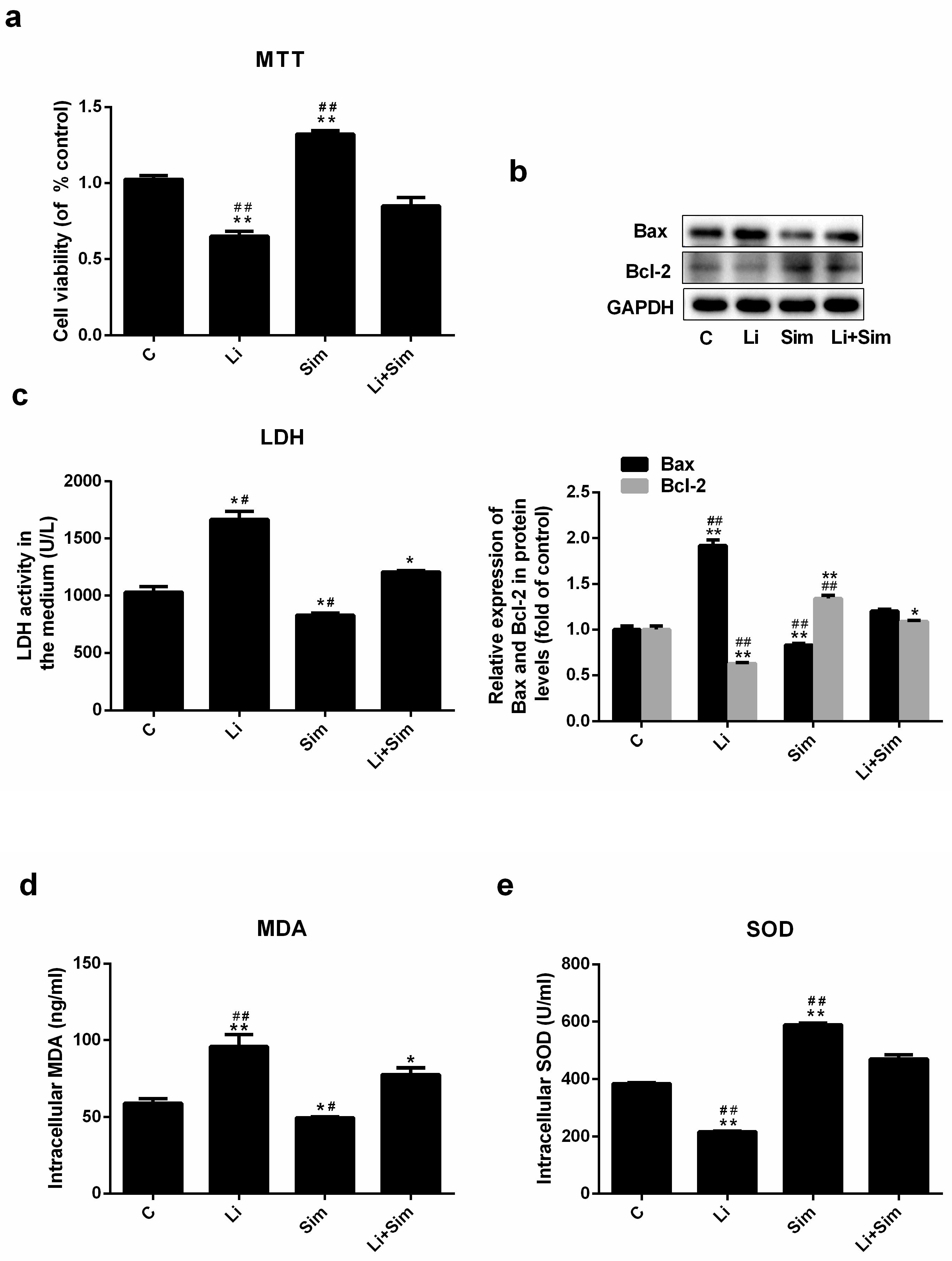 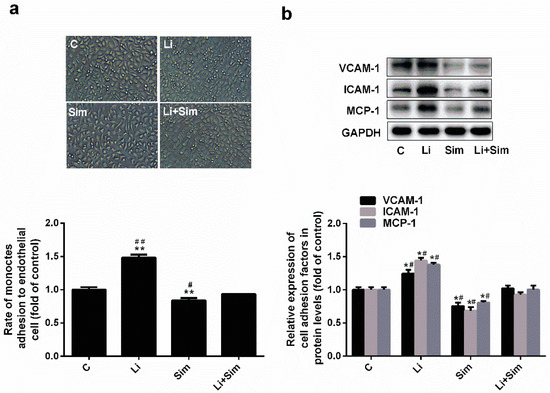 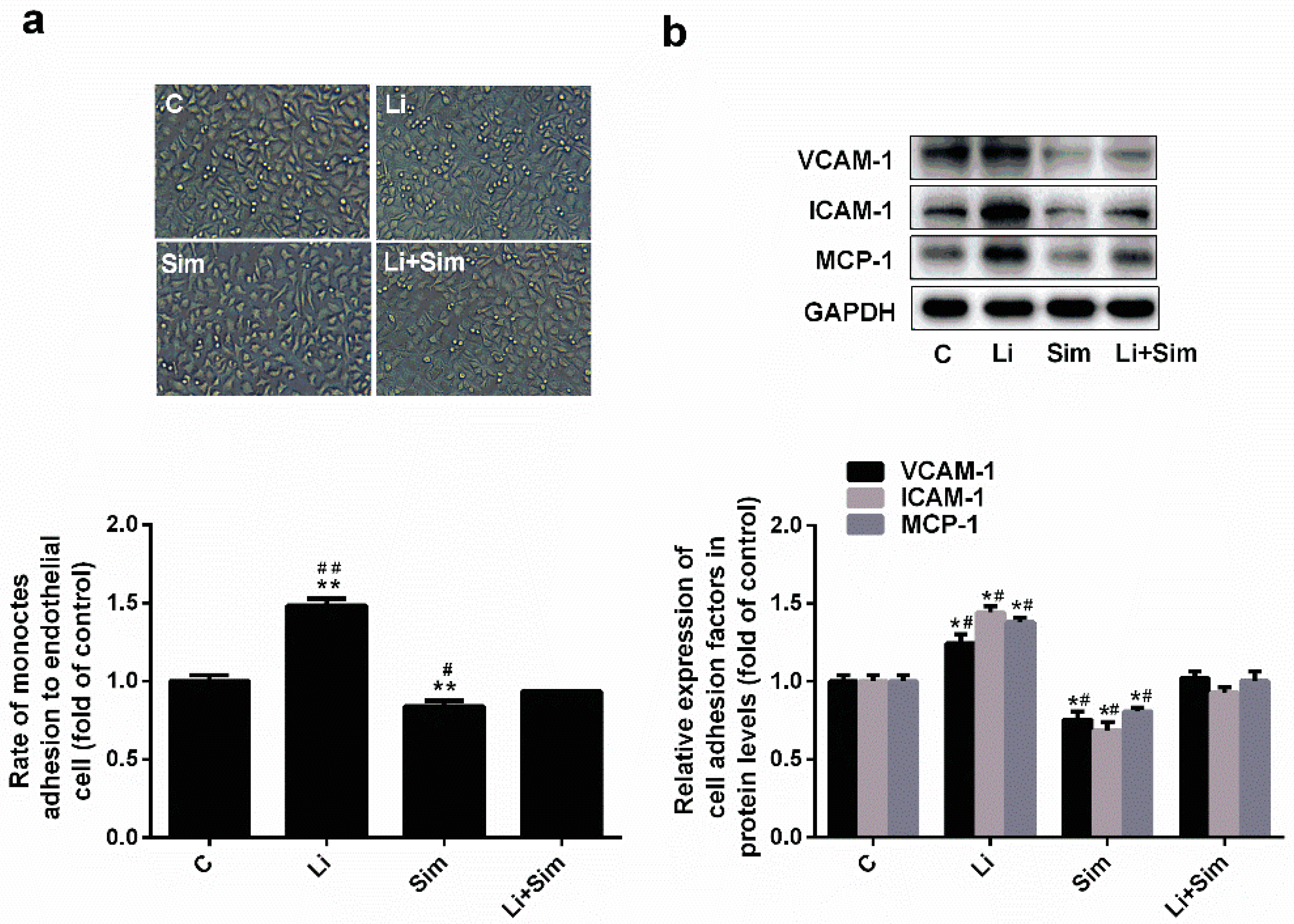 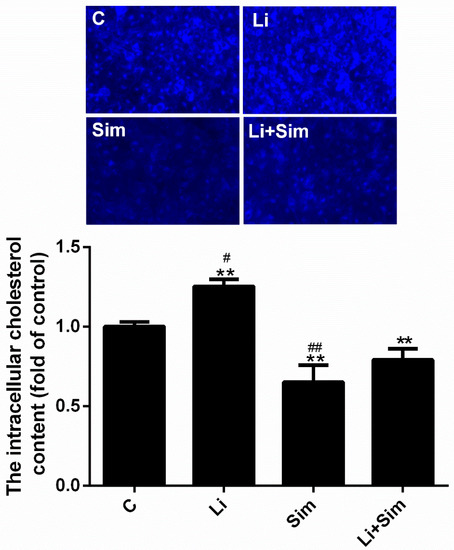 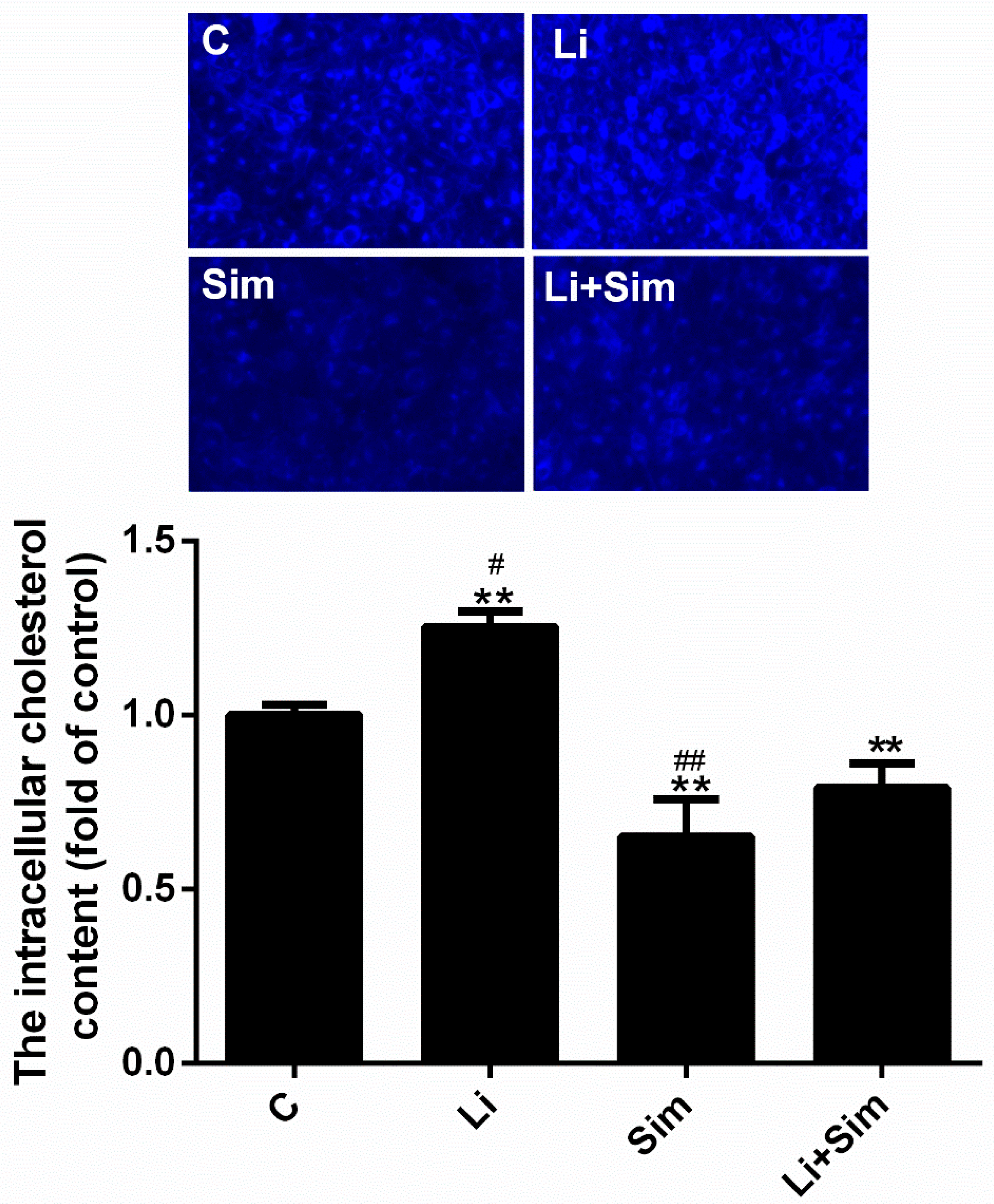 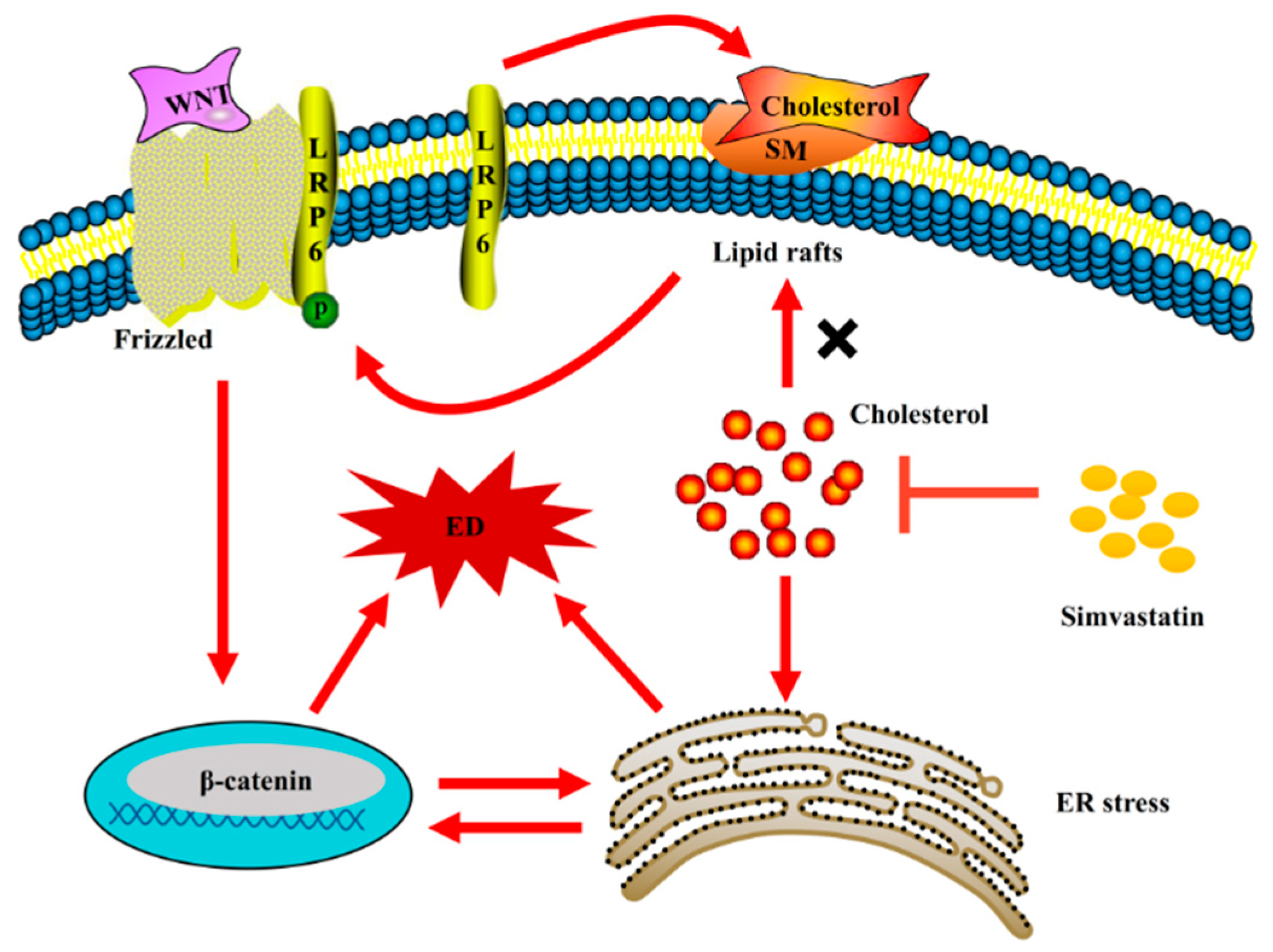