We performed single molecule studies to investigate the impact of several prominent small molecules (the oxazole telomestatin derivative L2H2-6OTD, pyridostatin, and Phen-DC3) on intermolecular G-quadruplex (i-GQ) formation between two guanine-rich DNA strands that had 3-GGG repeats in one strand and 1-GGG repeat in the other (3+1 GGG), or 2-GGG repeats in each strand (2+2 GGG). Such structures are not only physiologically significant but have recently found use in various biotechnology applications, ranging from DNA-based wires to chemical sensors. Understanding the extent of stability imparted by small molecules on i-GQ structures, has implications for these applications. The small molecules resulted in different levels of enhancement in i-GQ formation, depending on the small molecule and arrangement of GGG repeats. The largest enhancement we observed was in the 3+1 GGG arrangement, where i-GQ formation increased by an order of magnitude, in the presence of L2H2-6OTD. On the other hand, the enhancement was limited to three-fold with Pyridostatin (PDS) or less for the other small molecules in the 2+2 GGG repeat case. By demonstrating detection of i-GQ formation at the single molecule level, our studies illustrate the feasibility to develop more sensitive sensors that could operate with limited quantities of materials. View Full-Text
Keywords: G-quadruplex; small molecule; single molecule; FRET; biosensor G-quadruplex; small molecule; single molecule; FRET; biosensor
►▼ Show Figures 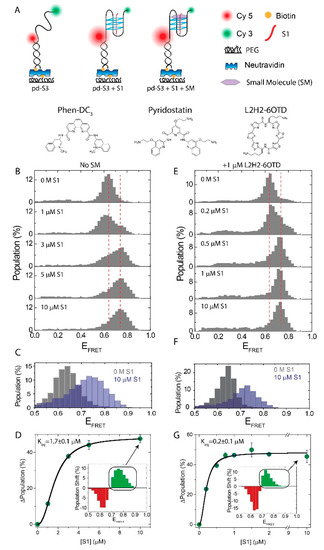