Ginseng has been used worldwide as traditional medicine for thousands of years, and ginsenosides have been proved to be the main active components for their various pharmacological activities. Based on their structures, ginsenosides can be divided into ginseng diol-type A and ginseng triol-type B with different pharmacological effects. In this study, six ginsenosides, namely ginsenoside Rb1, Rh2, Rg3, Rg5 as diol-type ginseng saponins, and Rg1 and Re as triol-type ginseng saponins, which were reported to be effective for ischemia-reperfusion (I/R) treatment, were chosen to compare their protective effects on cerebral I/R injury, and their mechanisms were studied by in vitro and in vivo experiments. It was found that all ginsenosides could reduce reactive oxygen species (ROS), inhibit apoptosis and increase mitochondrial membrane potential in cobalt chloride-induced (CoCl2-induced) PC12 cells injury model, and they could reduce cerebral infarction volume, brain neurological dysfunction of I/R rats in vivo. The results of immunohistochemistry and western blot showed that the expression of Toll-like receptor 4 (TLR4), myeloid differentiation factor 88 (MyD88), silencing information regulator (SIRT1) and nuclear transcription factor P65 (NF-κB) in hippocampal CA1 region of some ginsenoside groups were also reduced. In general, the effect on cerebral ischemia of Rb1 and Rg3 was significantly improved compared with the control group, and was the strongest among all the ginsenosides. The effect on SIRT1 activation of ginsenoside Rb1 and the inhibition effect of TLR4/MyD88 protein expression of ginsenoside Rb1 and Rg3 were significantly stronger than that of other groups. The results indicated that ginsenoside Rg1, Rb1, Rh2, Rg3, Rg5 and Re were effective in protecting the brain against ischemic injury, and ginsenoside Rb1 and Rg3 have the strongest therapeutic activities in all the tested ginsenosides. Their neuroprotective mechanism is associated with TLR4/MyD88 and SIRT1 activation signaling pathways, and they can reduce cerebral ischemic injury by inhibiting NF-κB transcriptional activity and the expression of proinflammatory cytokines, including interleukin-1β (IL-1β), tumor necrosis factor-α (TNF-α) and interleukin-6 (IL-6). View Full-Text
Keywords: ginsenosides; ischemia reperfusion; neuroprotective effect; inflammation; TLR4/MyD88; SIRT1 ginsenosides; ischemia reperfusion; neuroprotective effect; inflammation; TLR4/MyD88; SIRT1
►▼ Show Figures 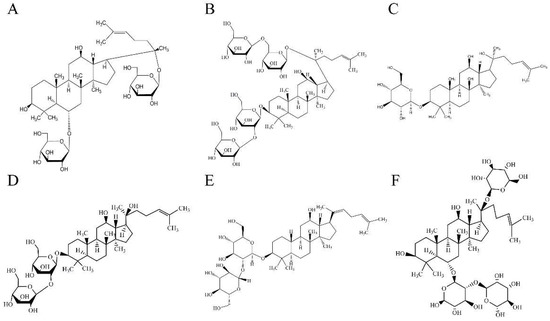