Role of Natural Products in Modulating Histone Deacetylases in Cancer

Histone deacetylases (HDACs) are enzymes that can control transcription by modifying chromatin conformation, molecular interactions between the DNA and the proteins as well as the histone tail, through the catalysis of the acetyl functional sites removal of proteins from the lysine residues. Also, HDACs have been implicated in the post transcriptional process through the regulation of the proteins acetylation, and it has been found that HDAC inhibitors (HDACi) constitute a promising class of pharmacological drugs to treat various chronic diseases, including cancer. Indeed, it has been demonstrated that in several cancers, elevated HDAC enzyme activities may be associated with aberrant proliferation, survival and metastasis. Hence, the discovery and development of novel HDACi from natural products, which are known to affect the activation of various oncogenic molecules, has attracted significant attention over the last decade. This review will briefly emphasize the potential of natural products in modifying HDAC activity and thereby attenuating initiation, progression and promotion of tumors. View Full-Text
Keywords: HDACs; cancer; natural products; proliferation; metastasis HDACs; cancer; natural products; proliferation; metastasis
►▼ Show Figures 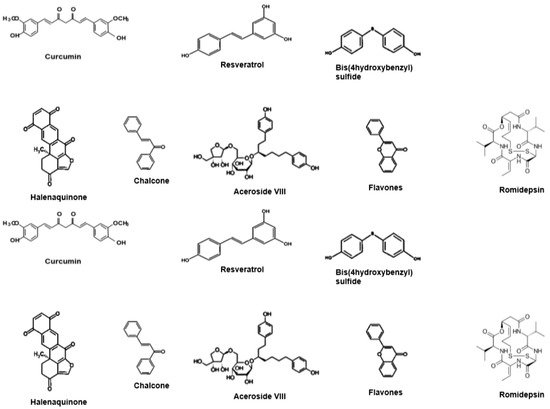