Interactive Effects of Light and Melatonin on Biosynthesis of Silymarin and Anti-Inflammatory Potential in Callus Cultures of Silybum marianum (L.) Gaertn.
Previous Article in Journal

Modulation of Skin Inflammatory Response by Active Components of Silymarin

Skin Protective Activity of Silymarin and its Flavonolignans

Silybum marianum (L.) is a medicinal plant traditionally used in treatment of liver disorders. In last decades, silymarin (SM), a standardized extract from S. marianum seeds has been studied for its dermatological application, namely for UVB-protective properties. However, information on SM and its polyphenols effect on activity of enzymes participating in the (photo)aging process is limited. Therefore, evaluation of SM and its flavonolignans potential to inhibit collagenase, elastase, and hyaluronidase in tube tests was the goal of this study. The antioxidant and UV screening properties of SM and its flavonolignans silybin, isosilybin, silydianin, silychristin and 2,3-dehydrosilybin (DHSB) were also evaluated by a DPPH assay and spectrophotometrical measurement. DHSB showed the highest ability to scavenge DPPH radical and also revealed the highest UVA protection factor (PF-UVA) that corresponds with its absorption spectrum. SM and studied flavonolignans were found to exhibit anti-collagenase and anti-elastase activity. The most potent flavonolignan was DHSB. None of studied flavonolignans or SM showed anti-hyaluronidase activity. Our results suggest that SM and its flavonolignans may be useful agents for skin protection against the harmful effects of full-spectrum solar radiation including slowing down skin (photo)aging.
Keywords: Silybum marianum; collagenase; elastase; sun protection factor Silybum marianum; collagenase; elastase; sun protection factor

The aging of skin is a complex progressive process leading to functional and aesthetic changes in skin tissue due to the effects of various intrinsic (genetic) and extrinsic (environmental) factors [1]. One of the most important extrinsic factors is solar radiation. UV (295–400 nm) wavelengths reaching the earth surface stimulate a complex reaction in skin, mainly the generation of reactive oxygen species (ROS). ROS oxidatively modify proteins and lipids to form carbonylated proteins and lipid peroxides, respectively, and activate enzymes (collagenase, elastase, hyaluronidase) that remodel components of the extracellular matrix (ECM) such as collagen, elastin, and hyaluronic acid. The activation of neutrophils is accompanied by the release of calcium-dependent zinc-containing matrix metalloproteinases (MMP), collagenase, and elastase into the extracellular space, resulting in breaking down collagen and elastic fibers [2]. Hyaluronidases degrade hyaluronic acid (HA) into smaller HA fragments of various lengths. This degradation is accompanied by a lowering of skin hydration and increase in the pro-inflammatory and pro-angiogenic properties of HA [3]. All of the above-mentioned enzymes contribute to skin elasticity decrease and wrinkle formation [4].
Phenolic compounds, due to their antioxidant properties, seem to be suitable candidates to diminish the above-mentioned structural and functional changes in skin. Milk thistle (Silybum marianum (L.) Gaertn. (Asteraceae)) is one of the oldest known herbal plants. It has been widely used in traditional European medicine for over two thousand years, especially for treating liver disorders. Silymarin (SM) is a standardized extract from S. marianum seeds that is rich in polyphenols. SM composition depends to a large degree on the plant variety, soil and weather conditions, and the time of harvest. Industrial preparations are only standardized for the total amount of silybin (SB), with the rest of the compounds ignored. Therefore, it is important to analyze the SM used and provide the composition [5]. SM is traditionally used as a hepatoprotective agent for its potent regenerative properties. Lately, SM is also utilized in dermatological and cosmetic preparations for its antioxidant effect and well-described ability to reduce UVB- and chemically-induced damage that may result in skin carcinogenesis [6]. SM contains flavonolignans (70–80%) and a chemically undefined fraction of polymeric and oxidized polyphenolic compounds (20–30%). The main active component in SM is the flavonolignan SB (mixture of diastereoisomers A and B). The less abundant compounds include the flavonolignans isosilybin (ISB, mixture of diastereoisomers A and B), silydianin (SD), silychristin (SC, mixture of diastereoisomers A and B) and trace amount of 2,3-dehydrosilybin (DHSB) and the flavonoid taxifolin. Due to their antioxidant, anti-inflammatory and immunomodulatory properties and ability to modulate various signaling pathways, SM and SB have been intensively studied for their potential in the prevention and/or slowing down of the progression of degenerative diseases [6,7].
The aim of this study was to evaluate the effect of SM and its pure flavonolignans (SB, DHSB, SD, ISB and SC; Figure 1) on collagenase, elastase and hyaluronidase activity and compare their UV screening and radical scavenging properties.

To study the ability of the studied compounds to absorb UV radiation and thus directly protect skin against solar radiation, their spectra were analyzed. All studied compounds including SM absorb UVB and UVA rays of solar radiation between 295 and 400 nm. SM and all flavonolignans except DHSB have quite similar absorption spectra and absorb UVB and mainly the shorter UVA wavelengths with the peak around 325 nm. In contrast, DHSB absorbs longer UVA wavelengths with the peak around 370 nm (Figure 2).

The SPF(290–320), SPF(290–400) and PF-UVA factors for SM and its constituents were determined by in vitro methods. The factors of pure compounds were determined in ethanolic solutions at the concentration of 50 µmol/L. As SM is a mixture of compounds, SM solution with the same mass concentration as flavonolignans (24.1 mg/L~50 µmol/L) was used. The SPF(290–320), SPF(290–400) and PF-UVA values are presented in Table 3. SM and all flavonolignans were less effective than ferulic acid (FA), used as a standard compound. The highest SPF(290–320) and PF-UVA value was found for SB and DHSB, respectively.

The modulation of the activity of collagenase, elastase and hyaluronidase by flavonolignans and SM was assessed by in vitro spectrophotometric and spectrofluorometric methods. The effectiveness of the studied compounds was evaluated in the concentration range of 0.05–100 mg/L (corresponding to a pure flavonolignans range of 0.1–200 µM). The concentration range used in individual inhibition studies depended on the solubility of the studied compounds in the reaction mixtures.
The effect of the studied flavonolignans (SB, DHSB, ISB, SD and SC) and SM on the activity of human leukocyte elastase is shown in Figure 3 and Table 4. DHSB and SB were the most effective flavonolignans. Other pure SM components (SC, SD and ISB) were markedly less effective than DHSB and SB. At the higher tested concentration of 50 mg/L (100 µM) the ability of SC, SD and ISB to inhibit elastase activity was less than 20% (see Figure 3). IC50 values could not be evaluated due to their limited solubility and effectiveness. The ability of DHSB to modulate the activity of human leukocyte elastase was comparable to the standard inhibitor oleanolic acid (OA). SM, the polyphenolic fraction from S. marianum seeds, had a similar dose-dependent effectiveness to the pure DHSB.
All studied flavonolignans and SM affected Clostridium histolyticum collagenase activity, see Figure 4 and Table 4. The most active flavonolignans were SB, DHSB and ISB. SD and SC were less potent than the above-mentioned compounds. All flavonolignans were more effective than the standard inhibitor 1,10-phenantroline (1,10-Ph). SM exhibited the strongest collagenase inhibition that was more pronounced at a concentration of 5 mg/L (75%) (see Figure 4).
SM and flavonolignans were also tested for their effect on the activity of hyaluronidase, however none of them modulated the enzyme’s activity (Data not shown).

Individual test compounds (0.01–2.5 g/L) in methanol (0.05 mL) were added to 0.1 mL of a methanolic solution of 2,2-diphenyl-1-picrylhydrazyl (DPPH; 20 mg/mL). After 30 min of incubation, the decrease in absorbance was measured at 517 nm. The determination was performed in triplicate and corrected to the blank sample (pure methanol). The radical scavenging activity of the tested compounds and SM was expressed as the concentration required for decoloration inhibition by 50% (IC50). The IC50 value for the pure compounds was expressed in both mass and molar concentration as mean ± SEM. For SM (a mixture of substances and an undefined fraction), the molar concentration was impossible to calculate. Quercetin was applied as a reference compound.

Stock solutions of flavonolignans and SM (12.05 mg/L; DMSO) were diluted in PBS (pH 7.5). The blank sample contains the same aliquot of DMSO in PBS (0.5%). The absorption spectrum was scanned in a quartz cuvette against the blank in the range 250–500 nm using the fast speed scan in a UV-2401 PC UV-VIS spectrophotometer (Shimadzu, Kyoto, Japan).

4.6. Anti-Aging Potential of Silymarin and Flavonolignans

The anti-aging potential of SM and its components was evaluated in a tube test as their ability to inhibit the activities of isolated hyaluronidase, collagenase and elastase.

Anti-elastase activity was evaluated using a method according to Ndlovu et al. [30] with small modifications. The reaction mixture contained 100 µL of 0.1 M HEPES buffer (pH 7.5), 10 µL of test sample/H2O/solvent/inhibitor, and 12.5 µL of elastase (1 U/mL) except for the blank. All tubes were incubated at room temperature for 5 min and the reaction was started by the addition of the substrate, N-methoxysuccinyl-Ala-Ala-Pro-Val-p-nitroanilide (10 µL, 4.4 mM; HEPES buffer; pH 7.5). The reaction was monitored as an increase in absorbance at 410 nm (ΔA/min) using a microplate spectrophotometer (INFINITE M200, Tecan Trading AG, Männedorf, Switzerland). Oleanolic acid was used as a standard inhibitor of the reaction.

Anti-collagenase activity was measured by a method described by Maity et al. [31] with minor modifications. The reaction mixture contained 80 µL of buffer solution (0.05 M Tris-HCl, 0.15 M NaCl, 5 mM CaCl2, 0.2 mM sodium azide, pH 7.6), 10 µL of test sample/H2O/solvent/inhibitor and 10 µL of collagenase (200 U/mL) or water (blank for each sample). All tubes were incubated at room temperature for 5 min. To start the reaction, 20 µL of substrate (collagen-fluorescein, 0.6 mg/mL) was added. The reaction was monitored as the change in fluorescence at 495 nm (excitation) and 515 nm (emission) using a microplate spectrophotometer (INFINITE M200, Tecan Trading AG, Männedorf, Switzerland). 1,10-Ph was used as a standard inhibitor of the reaction.

Anti-hyaluronidase activity was determined using a method described by Ndlovu et al. [30] with minor modifications. The reaction mixture contained 25 µL of CaCl2 (12.5 mM), 12.5 µL of test sample/H2O/solvent/ inhibitor and 12.5 µL of hyaluronidase (1.5 mg/mL) except for the blank. All tubes were preheated (37 °C, 20 min) and then the substrate, hyaluronic acid (1 mg/mL in 0.1 M acetate buffer, pH 3.5) was added to start the reaction. After incubation (37 °C, 60 min), the reaction was stopped with 25 µL KBO2 (0.8 M) and tubes were heated briefly (100 °C, 3 min). Tubes were cooled to room temperature and 800 µL DMAB (4 g DMAB in 40 mL of acetic acid and 5 mL of 10 M HCl) was added. After incubation (20 min), samples were transferred onto a 96-well plate and fluorescence was measured at 545 nm (excitation) and 612 nm (emission) with a microplate spectrophotometer (INFINITE M200, Tecan Trading AG, Switzerland). Sodium aurothiomalate was used as a standard inhibitor.

We wish to thank Benjamin John Watson-Jones for language correction. 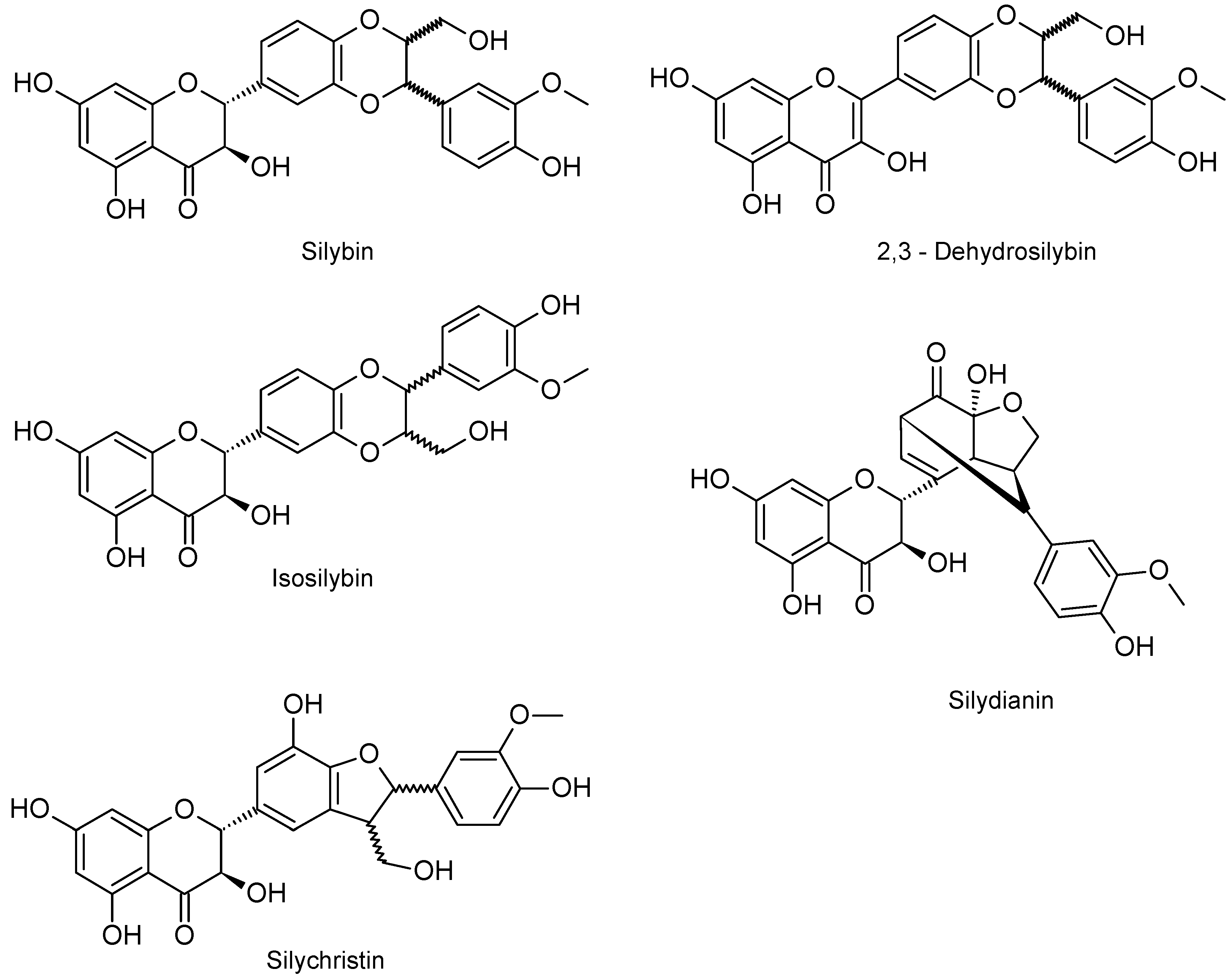 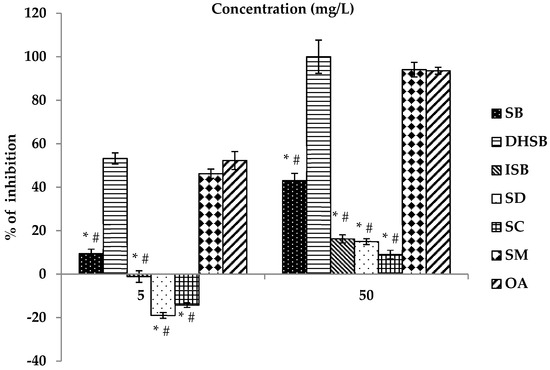 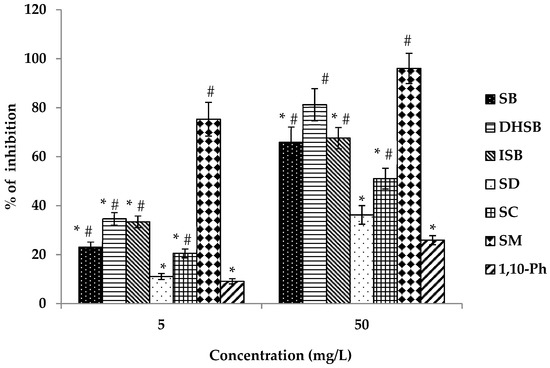 Table 4. Effect of flavonolignans and silymarin on elastase and collagenase activity.
Table 4. Effect of flavonolignans and silymarin on elastase and collagenase activity.
Silybin (SB), dehydrosilybin (DHSB), isosilybin (ISB), silydianin (SD), silychristin (SC), silymarin (SM). Oleanolic acid (OA) is a standard inhibitor of elastase. 1,10-Phenantroline (1,10-Ph) is a specific inhibitor of collagenase. ~ IC50 could not be determined due to the limited solubility of the studied compounds. N.D. IC50 was not determined for this compound. - SM is a mixture of substances, and the molar concentration of the extract is impossible to evaluate. # Significantly different from the respective standard inhibitor at p = 0.05; * significantly different from SM at p = 0.05.
© 2019 by the authors. Licensee MDPI, Basel, Switzerland. This article is an open access article distributed under the terms and conditions of the Creative Commons Attribution (CC BY) license (http://creativecommons.org/licenses/by/4.0/).
We use cookies on our website to ensure you get the best experience. Read more about our cookies here.
Accept
We have just recently launched a new version of our website. Help us to further improve by taking part in this short 5 minute survey here. here.
Never show this again