Diabetes mellitus (DM) is a heterogeneous, multifactorial, chronic metabolic disorder characterized by hyperglycemia due to an insulin insufficiency or insulin resistance (IR) [1]. Insulin and oral hypoglycemic agents, including biguanides, thiazolidinediones, and sulfonylureas, can effectively control hyperglycemia. However, they also have prominent side effects, such as hypoglycemia and gastrointestinal disturbances [2]. Therefore, there is an urgent need to look for efficacious alternatives with fewer side effects.
Numerous studies have shown that active ingredients, including flavonoids, polyphenols, alkaloids, and polysaccharides, such as pumpkin, bean, oat, and balsam pear polysaccharides, exert beneficial effects on DM and its complications through protecting against oxidative stress damage or improving insulin sensitivity, and the combination of two or more kinds of ingredients can usually achieve better results through different targets [3,4,5,6,7].
Pumpkin has been used for the prevention of various diseases, such as hyperlipidemia and hypoglycemia [8,9,10]. It has been reported that pumpkin polysaccharides showed hypoglycemic activity in diabetic mice via increasing the plasma insulin levels [9], and protected islet cells from streptozotacin (STZ) injury via increasing the superoxide dismutase (SOD) levels [11,12].
Puerarin (Figure 1) is an isoflavonoid extracted from pueraria lobata roots, and has been used for various medicinal purposes in traditional oriental medicine. Previous reports have demonstrated that puerarin has a variety of biological actions in such diseases as osteoporosis, cardiovascular disease, and gynecological disease [13,14,15,16]. Modern pharmacological research has demonstrated that puerarin exerts a protective effect on the kidneys of diabetic rats [17,18,19].
Many researchers have devoted themselves to the study of pumpkin polysaccharides; so far, only acidic polysaccharides have been found. Based on the identified characteristics, the pumpkin polysaccharides that have been separated in our lab are novel. Although the anti-diabetic effects of puerarin and pumpkin polysaccharides in rodent diabetes models have already been described in multiple studies, their synergistic hypoglycemic effect has not been reported. To our knowledge, the mechanism that underlies the compatibility between pumpkin polysaccharides and puerarin has not been elucidated, which greatly restricts their coadministration and hinders us from realizing a greater hypoglycemic effect. In the present study, we intended to verify the synergistic hypoglycemic effect of pumpkin polysaccharide and puerarin coadministration on type II diabetes mellitus (T2DM) mice. Furthermore, we investigated the potential mechanism underlying the synergetic hypoglycemic effect of pumpkin polysaccharides and puerarin on T2DM mice. The results suggest that the antioxidant capacity of pumpkin polysaccharides and puerarin may play an important role in reducing the risk of T2DM through the upregulation of nuclear factor E2 related factor 2 (Nrf2)-mediated target genes and the phosphoinositide-3-kinase (PI3K) signalling pathway.

As shown in Table 2, after eight weeks, significant changes in the serum lipid levels were observed in the DM group in comparison with that in the C group. STZ induction resulted in a significant increase in the serum total cholesterol (TC), triglycerides (TG), and low-density lipoprotein (LDL) levels, which reached 5.28 ± 0.49, 2.75 ± 0.23, and 2.79 ± 0.23 mM, respectively (p < 0.05), while a significant reduction in the serum high-density lipoprotein (HDL) level (0.83 ± 0.07 mM) was observed (p < 0.05). Compared with the DM group, the administration of pumpkin polysaccharides or puerarin not only significantly reduced the serum TC, TG, and LDL levels, but also improved the serum HDL level, and the effect on the combined group was greater. Consistent changes in free fatty acids (FFAs) were also observed. These results indicate that pumpkin polysaccharides and puerarin have lipid-lowering activity.

To evaluate the antioxidant capacity, the reactive oxygen species (ROS), malondialdehyde (MDA), glutathione (GSH), and SOD activity levels were determined after eight weeks. As shown in Table 3, the mice in the DM group were under oxidative stress with the amount of ROS (597.1 ± 25.01 IU/L) and MDA (11.59 ± 0.95 nmol/L) that was generated. The GSH level and SOD activity in the DM group decreased significantly (38.7% and 42.8%, respectively) in comparison with that in the C group (p < 0.05). After treatment with PP, P, and PPP, the mice in these groups had a higher GSH level and SOD activity than that in the DM group (p < 0.05). Furthermore, the MDA and ROS levels in the treated groups decreased significantly (p < 0.05). Hereby, by blocking the increase of MDA and ROS levels associated with an elevation in antioxidant ability, including the GSH level and the SOD activity, both pumpkin polysaccharides and puerarin had beneficial effects on the oxidative stress, and their synergetic effect was much greater.

4.2. Separation and Identification of Pumpkin Polysaccharides

The polysaccharides from a pumpkin powder were extracted with water at 80 °C for 2 h, following treatment with chloroform and butanol at a ratio of 4:1. Then, the mixture was concentrated and precipitated with three volumes of ice-cold ethyl alcohol at 4 °C overnight. The precipitate was collected by centrifugation and lyophilized to obtain a brownish powder. The crude precipitate, with a high molecular weight component of water-soluble substances, was separated by using DEAE-cellulose anion-exchange chromatography. Each polysaccharide fraction was collected and analyzed by the phenol–sulfuric acid method. Then, the major fraction was loaded into a Sephadex G-100 gel column chromatography system for further purification. The purified polysaccharides were collected and freeze-dried for further analysis.

Molecular weight was evaluated by HPGPC (Wyatt Technology Corporation, Santa Barbara, CA, USA) [57]. Pumpkin polysaccharides and dextran standards were dissolved in deionized water at a concentration of 2.0 mg/mL and then analyzed on an Agilent 1100 series HPLC system to determine the retention time. The column and detector compartments were maintained at 30 °C and 35 °C, respectively. Distilled water was used in the mobile phase. The detection rate was 1.0 mL/min, and the tested volume was 10 µL.

Pumpkin polysacchrides (10 mg) were hydrolyzed in 2 M trifluoroacetic acid at 100 °C for 6 h. The residual acid was removed with methyl alcohol. The hydrolyzates were dried and dissolved with distilled water, and then analyzed by HPLC on an Agilent 1100 series HPLC (Agilent Technologies Inc., Santa Clara, CA, USA). The temperature of the column was set at 35 °C, and the injection volume was 10 µL.

Male Kunming mice, 12~14 weeks old, and weighing 13~15 g, were purchased from the Laboratory Animal Center of the Academy of Military Medical Science, Beijing, China (No. SCXK 2014-0013). The animals were maintained at a temperature of 22 ± 2 °C, a relative humidity of 55 ± 5%, and a 12 h light/dark cycle. The experimental protocols were approved by the local ethics committee for animal experiments. All procedures were performed in accordance with the Health Services Guide of Tianjin Agricultural University for the Care and Use of Laboratory Animals.

All mice were subjected to an OGTT after eight weeks of drug administration. The mice were fasted overnight and then glucose (2.5 g/kg body weight) was orally administered. The blood glucose levels were measured via blood obtained from tail veins of mice at 0, 30, 60, and 120 min after glucose administration. The results were expressed as the AUC over 120 min.

At the end of the experimental period, the mice were anesthetized with pentobarbital sodium (70 mg/kg body weight) prior to sacrifice. Blood samples were collected from the retro-orbital vein and centrifuged at 2000 g for 20 min to gather the serum. The lipid levels, including FFAs, TC, TG, HDL, and LDL, in serum were analyzed. The blood insulin levels were determined by ELISA.

Liver tissues were homogenized in ice-cold phosphate-buffered saline and centrifuged at 1000 g for 10 min. The supernatant was collected for a biochemical analysis, including the ROS, MDA, and GSH levels and the SOD activity, to evaluate the antioxidant capacity. All assays were performed according to the manufacturers’ standards and protocols.

Cells were lysed in RIPA lysis buffer (50 mM Tris, 150 mM NaCl, 1 mL/100 mL NP-40, 0.5 g/100 mL sodium deoxycholate, pH 7.4) at 4 °C for 30 min. After removing the cellular debris by centrifugation at 10,000 g for 20 min, nuclear and cytoplasmic extracts from the supernatant were obtained by using a nuclear/cytoplasmic isolation kit. The proteins were subjected to SDS-PAGE and transferred onto a polyvinylidene fluoride membrane. The membrane was blocked with 5 g/100 mL skim milk for 2 h followed by incubation with the primary antibodies at 4 °C overnight. After washing with tris-buffered saline tween (TBST, 10 mM Tris-HCl, 150 mM Nacl, 0.5 mL/100 mL Tween 20, pH 7.4), the membranes were incubated with either HRP conjugated goat anti-mouse or goat anti-rabbit secondary antibody in TBST at 37 °C for 2 h. The bands were visualized using scanning gel electrophoresis and the enhanced chemilumescent detection system after washing the polyvinylidene fluoride membranes, and the density of the radiographic bands was analyzed.

All values are expressed as means ± standard deviation of three replicates. The statistical analysis was carried out by using one-way ANOVA. The differences in the mean were calculated using Duncan’s multiple range test for means with a 95% confidence limit (p < 0.05).

The pumpkin polysaccharides and puerarin exhibited a potent glucose tolerance effect, and treatment with them could result in a decrease in blood glucose. In addition, they efficiently alleviated insulin resistance and exerted a cytoprotective action on T2DM mice. At the molecular level, they could upregulate the expression of the critical proteins in the Nrf2/HO-1 and PI3K/Akt signalling pathways.

This work was supported by the Postgraduate Training Quality Improvement Project of Tianjin Agricultural University (No. 2017YPY021), the Tianjin Science and Technology Project (No. 17ZXYENC00090 and No. 18ZXBFNC00110) and the Innovative Research and Experimental Projects of Tianjin Academy of Agricultural Sciences (No. 201910). 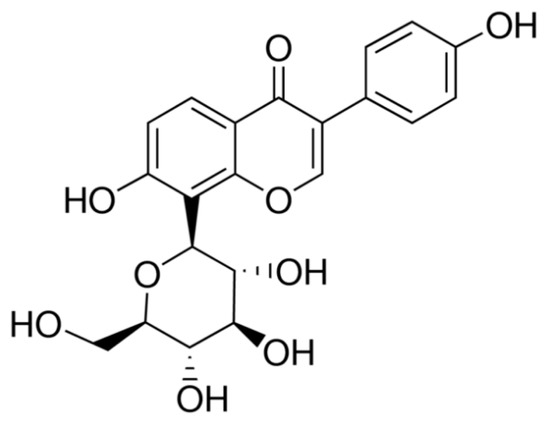 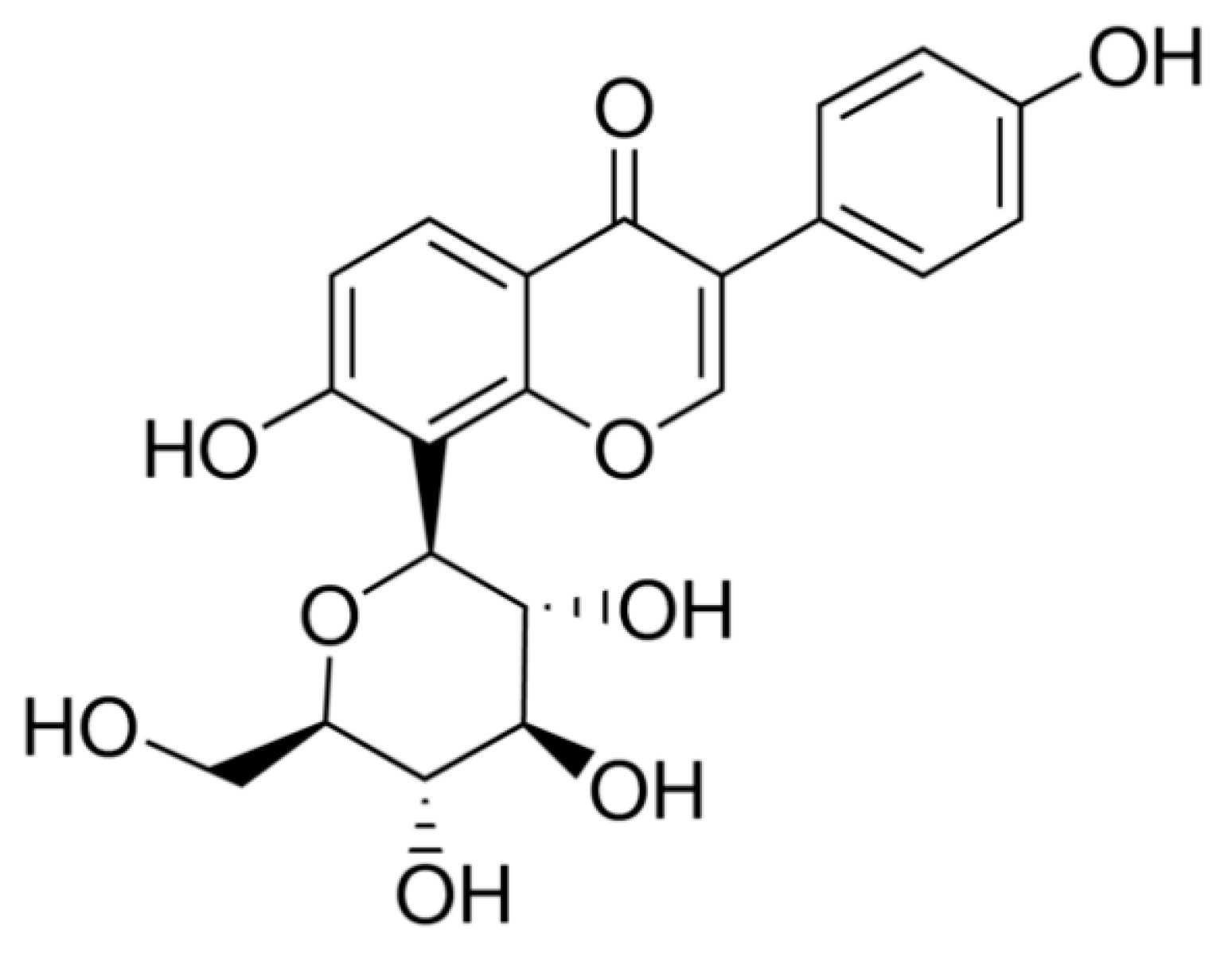 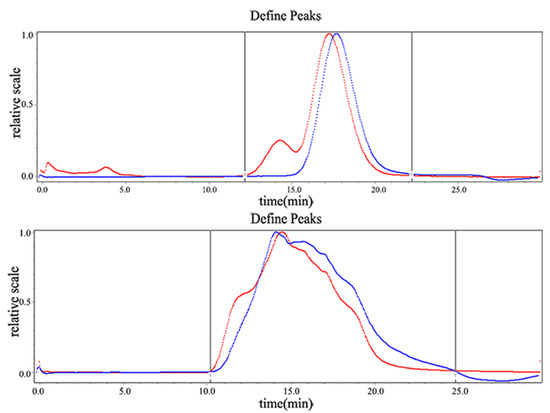 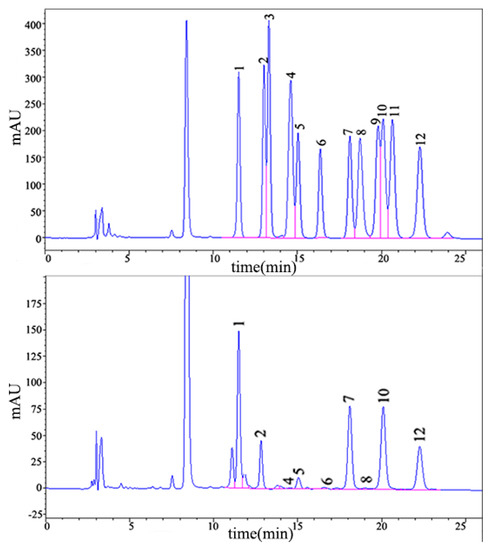 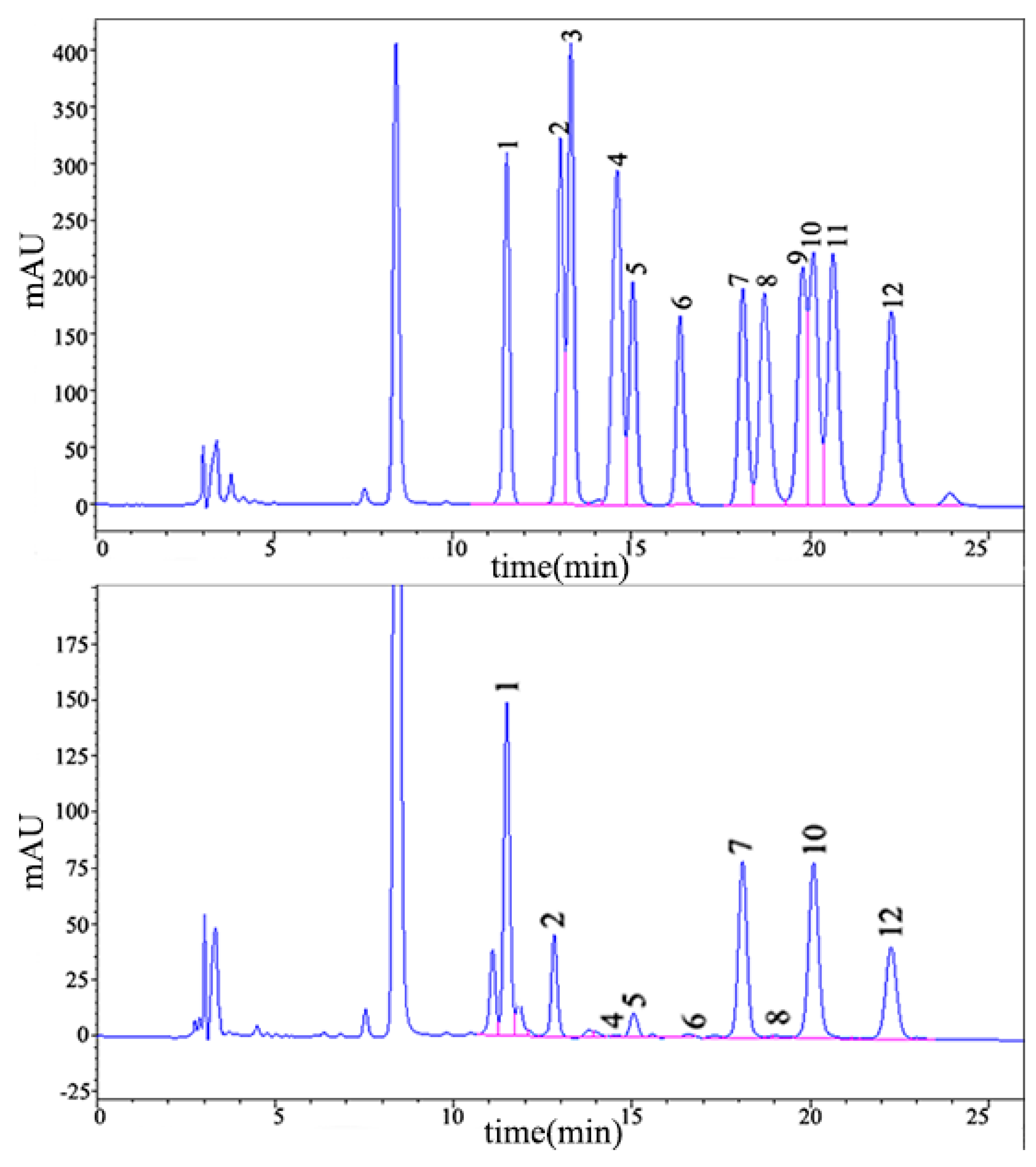 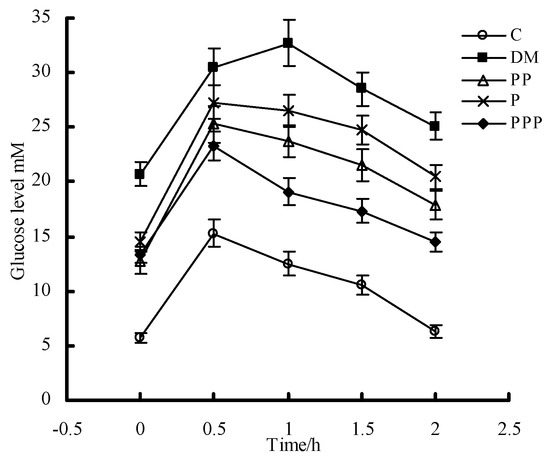 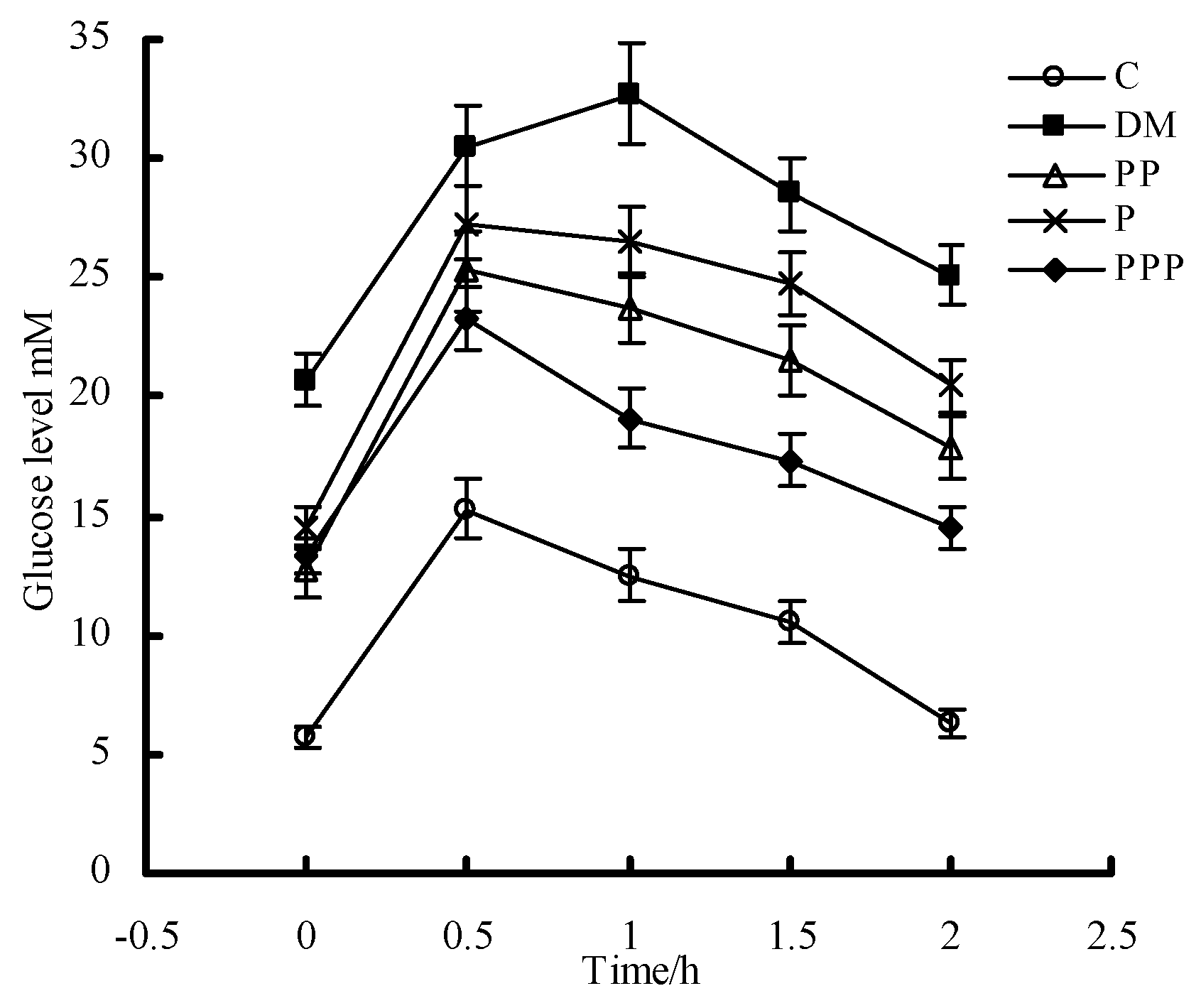 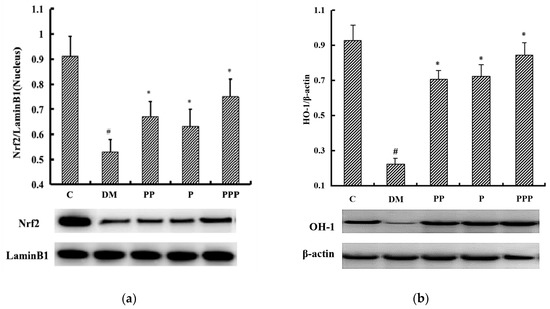 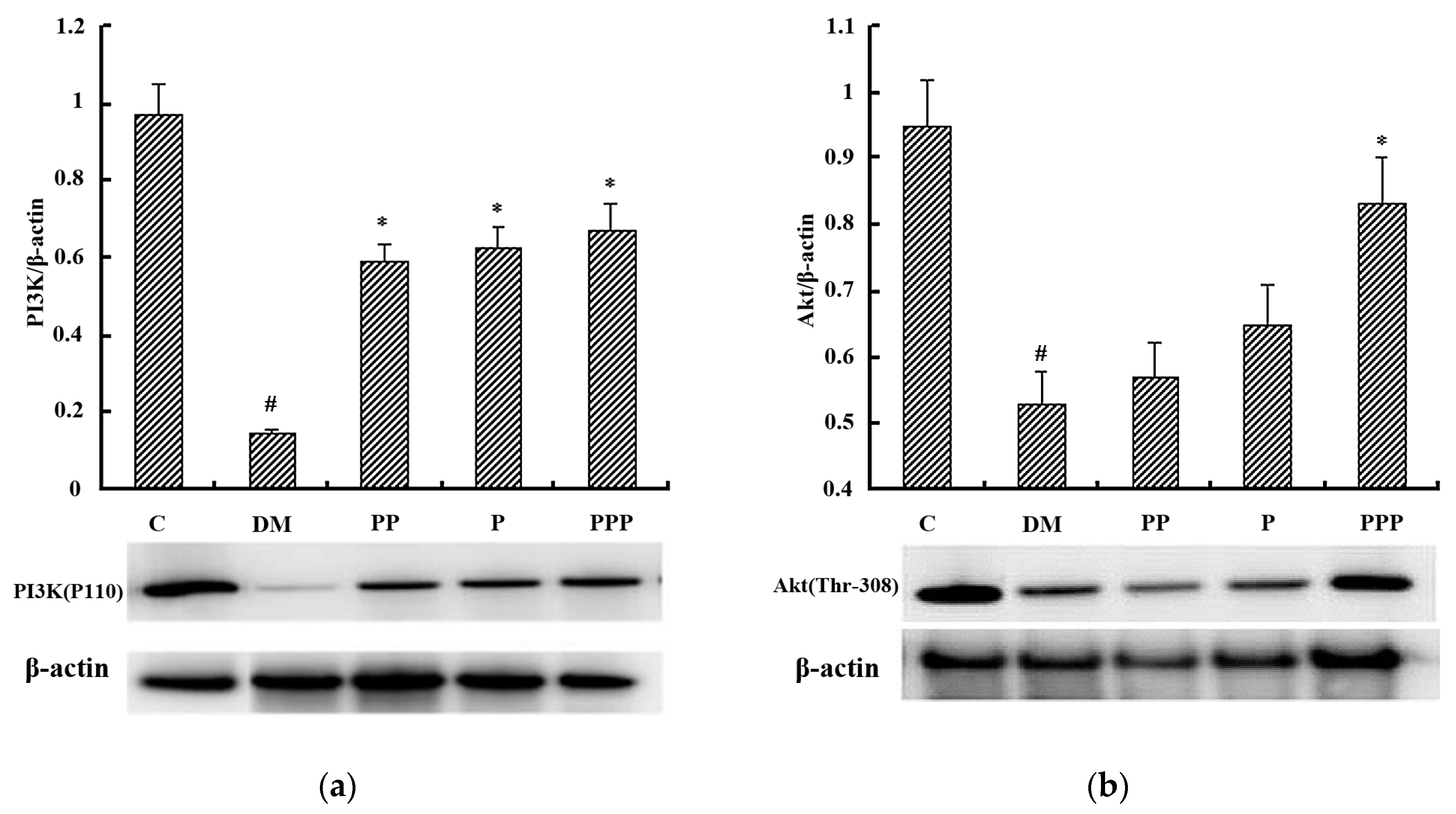 Table 3. The effect on oxidative stress.
Table 3. The effect on oxidative stress.
C, control; DM, diabetic model; PP, pumpkin polysaccharides; P, puerarin; PPP, pumpkin polysaccharides and puerarin. n = 10; # p < 0.05 compared with the C group; * p < 0.05 compared with the DM group.
© 2019 by the authors. Licensee MDPI, Basel, Switzerland. This article is an open access article distributed under the terms and conditions of the Creative Commons Attribution (CC BY) license (http://creativecommons.org/licenses/by/4.0/).
We use cookies on our website to ensure you get the best experience. Read more about our cookies here.
Accept
We have just recently launched a new version of our website. Help us to further improve by taking part in this short 5 minute survey here. here.
Never show this again