The root of Gentiana straminea Maxim. (Gentianaceae), is officially listed as “Qin-Jiao” in the Chinese Pharmacopoeia for the treatment of rheumatic arthritis, icteric hepatitis, constipation, pain, and hypertension. To establish the geographical origin traceability in G. straminea, its chemical profiles were determined by a UPLC-Q exactive mass spectrometer, from which 43 compounds were identified by comparing retention times and mass spectrometry. Meanwhile, a pair of isomers (loganin and secologanol) was identified by mass spectrometry based on their fragmentation pathway. A total of 42 samples from difference habitats were determined by an UPLC-Q exactive mass spectrometer and the data were assayed with multivariate statistical analysis. Eight characteristic compounds were identified to determine the geographical origin of the herb. To estimate the key characteristic markers associated with pharmacological function, the inhibiting activities of nitric oxide (NO) production in lipopolysaccharide (LPS)-induced macrophages were examined. This finding is crucial in realizing the determination of botanical origin and evaluating the quality of G. straminea. View Full-Text
Keywords: Gentiana straminea; geographical origin; UPLC-Q exactive mass; metabolomics; multivariate analysis Gentiana straminea; geographical origin; UPLC-Q exactive mass; metabolomics; multivariate analysis
►▼ Show Figures 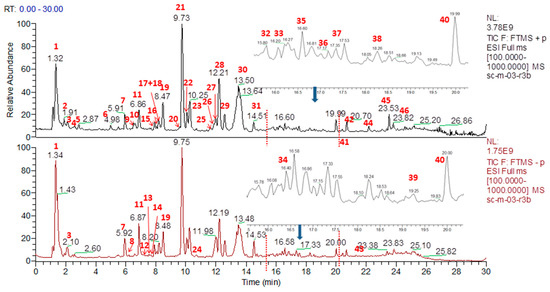