Synthesis, X-ray Characterization and Density Functional Theory (DFT) Studies of Two Polymorphs of the α,α,α,α, Isomer of Tetra-p-Iodophenyl Tetramethyl Calix[4]pyrrole: On the Importance of Halogen Bonds
Previous Article in Journal

A halogen-bonded complex formed between methane and chlorine monofluoride has been isolated in the gas phase before the reaction between the components and has been characterised through its rotational spectrum, which is of the symmetric-top type but only exhibits K = 0 type transitions at the low effective temperature of the pulsed-jet experiment. Spectroscopic constants for two low-lying states that result from internal rotation of the CH4 subunit were detected for each of the two isotopic varieties H4C···35ClF and H4C···37ClF and were analysed to show that ClF lies on the symmetry axis with Cl located closer than F to the C atom, at the distance r0(C···Cl) Å and with an intermolecular stretching force constant kσ 4 N m−1. Ab initio calculations at the explicitly correlated level CCSD(T)(F12c)/cc-pVTZ-F12 show that in the equilibrium geometry, the ClF molecule lies along a C3 axis of CH4 and Cl is involved in a halogen bond. The Cl atom points at the nucleophilic region identified on the C3 axis, opposite the unique C–H bond and somewhere near the C atom and the tetrahedron face centre, with re(C···Cl) = 3.191 Å. Atoms-in-molecules (AIM) theory shows a bond critical point between Cl and C, confirming the presence of a halogen bond. The energy that is required to dissociate the complex from the equilibrium conformation into its CH4 and ClF components is only De 5 kJ mol−1. A likely path for the internal rotation of the CH4 subunit is identified by calculations at the same level of theory, which also provide the variation of the energy of the system as a function of the motion along that path. The barrier to the motion along the path is only 20 cm−1. View Full-Text
Keywords: halogen bond; microwave spectroscopy; atoms-in-molecules calculations; internal rotation of methane halogen bond; microwave spectroscopy; atoms-in-molecules calculations; internal rotation of methane
►▼ Show Figures 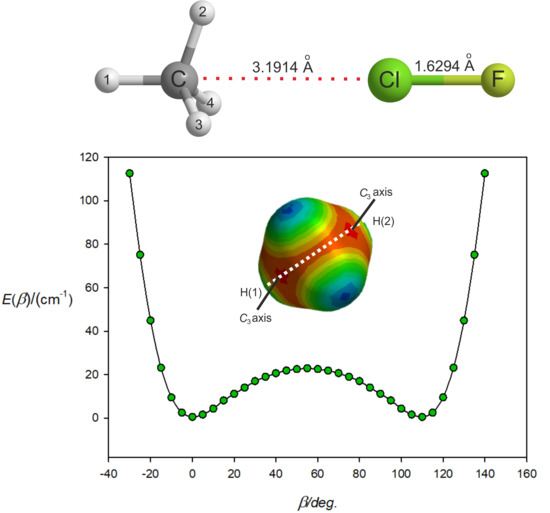