Anti-Acetylcholinesterase Activities of Mono-Herbal Extracts and Exhibited Synergistic Effects of the Phytoconstituents: A Biochemical and Computational Study

Alzheimer’s disease (AD), a neurodegenerative disease, is the most common form of dementia. Inhibition of acetylcholinesterase (AChE) is a common strategy for the treatment of AD. In this study, aqueous, hydro-methanolic, and methanolic extracts of five potent herbal extracts were tested for their in vitro anti-AChE activity. Among all, the Tinospora cordifolia (Giloy) methanolic fraction performed better with an IC50 of 202.64 µg/mL. Of the HPLC analyzed components of T. cordifolia (methanolic extract), palmatine and berberine performed better (IC50 0.66 and 0.94 µg/mL, respectively) as compared to gallic acid and the tool compound “galantamine hydrobromide” (IC50 7.89 and 1.45 µg/mL, respectively). Mode of inhibition of palmatine and berberine was non-competitive, while the mode was competitive for the tool compound. Combinations of individual alkaloids palmatine and berberine resulted in a synergistic effect for AChE inhibition. Therefore, the AChE inhibition by the methanolic extract of T. cordifolia was probably due to the synergism of the isoquinoline alkaloids. Upon molecular docking, it was observed that palmatine and berberine preferred the peripheral anionic site (PAS) of AChE, with π-interactions to PAS residue Trp286, indicating that it may hinder the substrate binding by partially blocking the entrance of the gorge of the active site or the product release. View Full-Text
Keywords: Alzheimer’s disease; anti-acetylcholinesterase activity; herbal extracts; HPLC; synergistic effect; molecular docking Alzheimer’s disease; anti-acetylcholinesterase activity; herbal extracts; HPLC; synergistic effect; molecular docking
►▼ Show Figures 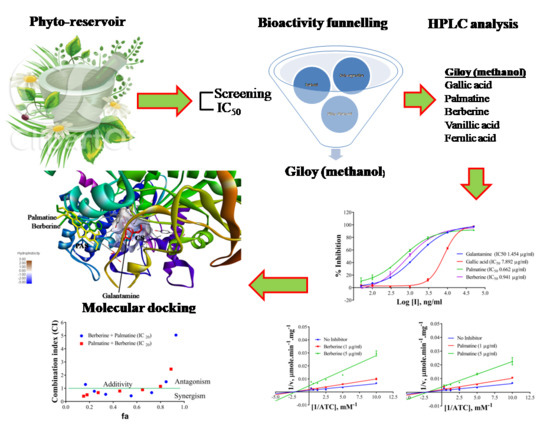