Panax ginseng, as one of the most important medicinal plant, root was used for first aid, health care, and the treatment of coma, gastrointestinal disease, and cardiovascular disease in ancient China [1]. Pharmacological studies found ginseng possesses diverse bioactive effects, such as anti-aging, anti-stress, anti-tumor, anti-inflammatory, and anti-diabetes [2]. It has a beneficial impact on brain function, liver function, immune function, and sexual function [3]. Since the use of traditional Chinese herbs for medicinal and dietary purposes is becoming increasingly popular in Western countries, ginseng is becoming one of the best-selling herbs in the world [4].
Ginsenosides are known as the key active ingredient of ginseng [2]. The diversity of ginseng efficacy is related to the structural variability of ginsenosides, also known as triterpenoid saponins [5]. More than a hundred ginsenosides have been reported in Panax ginseng [6]. Among them, ginsenosides Rb1, Rb2, Rc, Rd, Re, Rg1 (chemical structures are shown in Figure 1) are the most abundant and are usually regarded as the main ginsenosides. These six ginsenosides are normally used to evaluate ginsenoside abundance and for quality control. The accumulation of ginsenosides in ginseng is variable and can be influenced by the surrounding environment, including soil fertility, temperature, light, and humidity [7]. Even in the same area, the type and amount of ginsenosides are dependent on ginseng age [8], harvest time [9], and storage process [10]. Since ginseng’s bioactive properties depend largely on the contents and types of ginsenosides, accurately knowing the amount of ginsenosides is not only important for the pharmacological evaluation of ginseng products, but also for assessing the quality of ginseng from different regions.
With the increasing popularity of ginseng around the world, ginseng is also cultivated outside its place of origin (Northeast China, and Korea). Recently ginseng has been grown in New Zealand (NZ). NZ has a unique geographical environment, such as the volcanic pumice soil, high-intensity UV rays, and open-wild environment. NZ-grown ginseng showed abundant ginsenosides in the underground parts (roots, rootlets) and above ground parts (stem and leaf) based on our previous study [11]. To compare the average amount of ginsenosides between NZ-grown ginseng and ginseng grown in China and Korea, we analyzed the amount of ginsenosides in different batches of ginseng grown in NZ under a pine forest canopy and compared it to published data. Thus, this paper not only provides the information about the differences of ginsenoside content in ginseng from different places of origin, but it also provides a reference data for the saponin content from ginseng produced in different areas. To our knowledge, this is the first article focusing on ginsenoside content in different regions.

2.1. The Ginsenoside Contents of NZ-Grown Ginseng

In this study, the amount of 21 ginsenosides in 10 batches of ginseng samples were analyzed using LC-MS/MS described in our previous method [11]. Briefly, thirteen ginsenosides (Rb1, Rb2, Rb3, Rc, Rd, Re, Rf, Rg1, Rg2, Rg3, Rh1, Rh2, and F2) were accurately quantified by their own linear regression equations of standard curves, and some ginsenosides without reference standards, such as ginsenosides m-Rb1 (m = malonyl), m-Rb2, m-Rb3, m-Rc, m-Rd, m-Re, and m-Rg1, were relatively quantified by the regression equations of their corresponding neutral ginsenosides. As shown in Table 1, apart from the individual ginsenoside content, the total ginsenoside amount, the ratio of protopanaxadiol (PPD)-type to protopanaxatriol (PPT)-type (PPD/PPT) and the ratio of neutral ginsenoside to malonyl ginsenoside (G/m-G) are also described in this section.
Among those samples, the ginsenoside concentrations were varied. The highest amount (102.69 ± 0.91 mg/g) and the lowest amount (38.72 ± 0.15 mg/g) were from the third batch and fifth batch of samples, respectively. Ginsenosides Rg1, Rb1, m-Rb1, and Re are the four major ginsenosides in most samples except the fourth and fifth batches of samples, while in the fourth and fifth batches of samples, the major ginsenosides give way to the ginsenosides m-Rb1, m-Rb2, m-Rc, and Rg1 based on their concentrations. The high amount of m-Rb1, m-Rb2, and m-Rb3 lead to the higher ratios of PPD/PPT and lower ratios of G/m-G in sample four and five. Both ratios are approximately two from other samples.
Usually, ginseng refers to the whole ginseng root including the main root body, root hair, and rhizome. In our previous study, we analyzed ginsenosides from different parts including main root, fine root, rhizome, stem, and leaf [11], it was found that the underground parts, including main root, fine root, and rhizome, have very similar ginsenoside composition. In this study ginsenosides were determined from the whole underground part. There is another study reporting ginsenosides analysis for NZ-grown ginseng [12], which only detected seven main ginsenosides in four batches of ginseng samples. In order to compare with China and Korea grown ginseng, the data from Table 1 and Follett’s publication [12] are used to calculate the average content of ginsenosides of NZ-grown ginseng.

All the NZ-grown ginseng samples were collected from pine forest around Taupo and Rotorua (Table 2). The samples were rinsed with water, lyophilized at −68 °C and powered.

3.2. Analysis of Ginsenosides Content from China and Korea Grown Ginseng

Ginsenosides content of China and Korea grown ginseng obtained from publications based on the following search criteria.

Investigators reviewed the titles, abstracts, and full text of the resulting articles for inclusion. Data were extracted from each publication meeting the inclusion criteria. The values of ginsenosides (Rb1, Rb2, Rc, Rd, Re, Rf, and Rg1) content (mean) were collected based on grown locations (China, Korea, and NZ). When ginsenosides content were reported using bar charts in the literature, the estimated values were collected using ruler assistance.

This work was supported by funding from the Alpha-Massey Natural Nutraceutical Research Centre.

The authors thank the Kiwiseng Co. Ltd. for providing the NZ-grown ginseng. We would like to acknowledge Ceire Hopley for her help in literature searching and analysis and Maggie Zou for her help to acquire LC-MS/MS data. 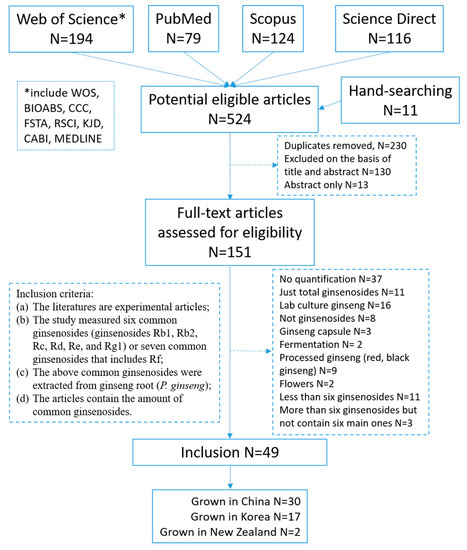 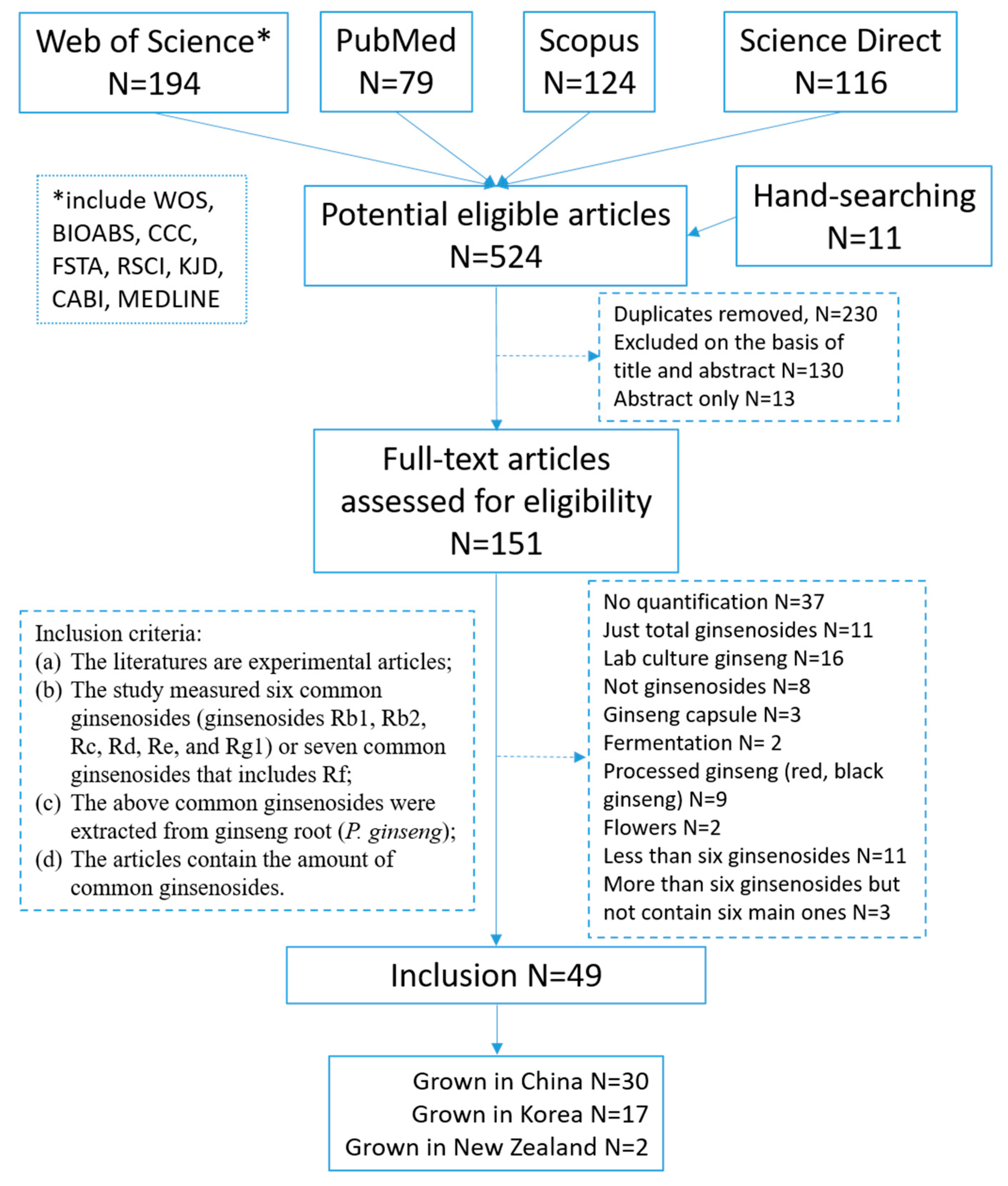 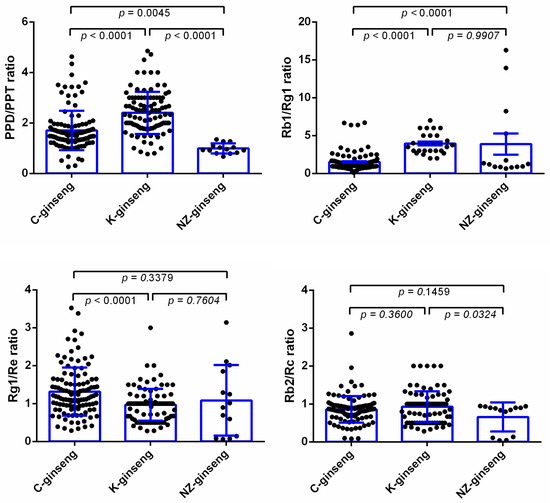 Table 2. Information of ten batches of ginseng samples.
Table 2. Information of ten batches of ginseng samples.
© 2019 by the authors. Licensee MDPI, Basel, Switzerland. This article is an open access article distributed under the terms and conditions of the Creative Commons Attribution (CC BY) license (http://creativecommons.org/licenses/by/4.0/).
We use cookies on our website to ensure you get the best experience. Read more about our cookies here.
Accept
We have just recently launched a new version of our website. Help us to further improve by taking part in this short 5 minute survey here. here.
Never show this again