Bioactive Constituents from the Roots of Eurycoma longifolia

:
This work presents the first example of utilization of amphiphilic block copolymer PCL-PEG-PCL as a stationary phase for capillary gas chromatographic (GC) separations. The PCL-PEG-PCL capillary column fabricated by static coating provides a high column efficiency of 3951 plates/m for n-dodecane at 120 °C. McReynolds constants and Abraham system constants were also determined in order to evaluate the polarity and possible molecular interactions of the PCL-PEG-PCL stationary phase. Its selectivity and resolving capability were investigated by using a complex mixture covering analytes of diverse types and positional, structural, and cis-/trans-isomers. Impressively, it exhibits high resolution performance for aliphatic and aromatic isomers with diverse polarity, including those critical isomers such as butanol, dichlorobenzene, dimethylnaphthalene, xylenol, dichlorobenzaldehyde, and toluidine. Moreover, it was applied for the determination of isomer impurities in real samples, suggesting its potential for practical use. The superior separation performance demonstrates the potential of PCL-PEG-PCL and related block copolymers as stationary phases in GC and other separation technologies.
Keywords:
capillary gas chromatography; stationary phase; amphiphilic block copolymer; separation performance; isomers

Capillary gas chromatography (GC) is one of efficient separation techniques in petrochemical engineering, environmental protection, food analysis, and biological medicine because of its inherent advantages of high resolving capability and selectivity, fast analysis speed, as well as low cost [1,2,3,4]. As the core component in GC system, a stationary phase with high selectivity enables effective separation of analytes with close nature. In the past decades, diverse types of GC stationary phases have been explored, such as polymeric materials, ionic liquids, macrocyclic compounds and metal organic frameworks, etc., [5,6,7,8,9,10,11,12,13,14]. Polymeric materials with good solubility and film-forming ability, wide operational temperature range, and high chemical/thermal stability are advantageous as stationary phase in GC separations. Until now, siloxane polymers as stationary phases are most widely used in GC [15,16]. A stationary phase with high selectivity for analytes of varying nature is ideal for the analysis of complex samples. Modifying the side chains of polymer by different organic molecules is a common strategy to fine tune the polarity and selectivity of stationary phases [16,17,18]. Herein, we present a new strategy for the preparation and application of amphiphilic block copolymer as highly selective GC stationary phase.
Poly(ε-caprolactone) (PCL) is a saturated aliphatic polyester that is preferentially synthesized by ring-opening polymerization of ε-caprolactone [19]. Its repeating unit contains one relatively polar ester group and five nonpolar methylene groups [20]. It is well known that PCL is a hydrophobic and semi-crystalline polymer [21]. Its glass and melting temperatures are about −60 °C and 55 °C, respectively. Moreover, PCL possesses good solubility in common organic solvents, good film-forming ability and chemical/thermal stability [22,23]. Poly(ethylene)glycol (PEG) is a well-known hydrophilic polymer. It is a polyether composed of repeated ethylene glycol units [-(CH2CH2O)n] [24,25]. Moreover, it can be used as the hydrophilic part of amphiphilic block copolymers. Besides hydrophobic interaction, PEG moieties can provide some other interactions such as H-bonding and dipole–dipole interactions. The amphiphilic triblock copolymer of PCL-PEG-PCL can be simply synthesized via the ring-opening polymerization of ε-caprolactone in the presence of PEG [26,27,28]. The amphiphilic structure provides multiple molecular interactions for compounds of diverse types. The unique structure and favorable physicochemical features offer its good potential in separation science, which interested us to explore its separation performance as a GC stationary phase.
Herein, we present the report of using PCL-PEG-PCL as a stationary phase for GC separations (Scheme 1). The synthesized PCL-PEG-PCL was statically coated onto fused-silica capillary column. Then, the column efficiency, polarity and Abraham solvation system constants were determined. Afterward, the selectivity and resolving capability were investigated by utilizing the mixtures of diverse analytes and isomers. Moreover, the prepared PCL-PEG-PCL column was applied for the detection of impurity isomers in real samples. To our knowledge, this is the first example of employing amphiphilic block copolymer in chromatography.

FT-IR and 1H-NMR were used to confirm the structure of PCL-PEG-PCL which was in good agreement with the literature [26,29,30]. The FT-IR spectrum of PCL-PEG-PCL is displayed in Figure S1. The absorption bands at 2942 cm−1 and 2864 cm−1 are attributed to C–H stretching vibrations of CH2 units of PCL chain. The strong band at 1721 cm−1 indicates the presence of ester carbonyl groups. The absorption bands at 1103 cm−1 and 1044 cm−1 are due to the C–O–C stretching vibration of the CH2–O–CH2 units of PEG block and the –COO– stretching vibrations, respectively. The 1H-NMR spectrum of the PCL-PEG-PCL is presented in Figure S2. The signals at 1.38, 1.72, 2.33, and 4.06 ppm are attributed to the methylenes of –(CH2)3–, –OCCH2–, and –CH2OOC– in PCL blocks, respectively. The sharp peak at 3.64 ppm is assigned to the methylene protons of the PEG –CH2CH2O– units, and the very weak peaks at 4.25 is attributed to the methylene protons of –CH2CH2O– that are linked to PCL blocks. The 1H-NMR spectra were used to calculate the PEG/PCL ratio according to the above literatures and the PEG/PCL blocks ratio was 1.5:1. In addition, the glass transition temperature (Tg) of the synthesized copolymer was tested by differential scanning calorimetry (DSC). As shown in Figure 1a, the glass transition temperature of PCL-PEG-PCL was observed at approximately 2 °C. Thermogravimetric analysis (TGA) was employed to evaluate the intrinsic thermal stability of PCL-PEG-PCL in Figure 1b. The TGA curve showed that the PCL-PEG-PCL is stable up to 267 °C, thereby suggesting its low glass transition temperature and good thermal stability and feasibility as the stationary phase for GC separation.

To evaluate the overall efficiency of the PCL-PEG-PCL column, its Golay curve was determined by measuring the height equivalent to a theoretical plate (HETP) of n-dodecane at different flow rates at 120 °C.As shown in Figure 1a, it attained the minimum HETP of 0.25 mm at 0.3 mL/min, corresponding to the column efficiency of 3951 plates/m. The high column efficiency can be attributed to the good solubility of PCL-PEG-PCL stationary phase in the solvent for column fabrication, facilitating its uniform coating on the capillary wall. In addition, Figure 1d presents the SEM cross-section images of the PCL-PEG-PCL column, confirming its uniform coating with the thickness of approximately 300 nm on the capillary column.

2.4. Separation of a Complex Mixture of 30 Analytes of Diverse Types

2.5. Separation of Positional, Structural, and cis-/trans-Isomers

The minimum allowable operating temperature (MiAOT) was defined as the temperature where the column efficiency drops down to half of its original value at elevated temperatures [31,39]. The MiAOT of the PCL-PEG-PCL column was determined by naphthalene over atemperature range of 40–120 °C at a flow rate of 1 mL/min and the results are illustrated in Figure 5a. As shown, the column efficiency decreased gradually with temperature reduction and the half column efficiency occurred at about 40 °C, indicating its MiAOT for the GC separation. Thermal stability of the PCL-PEG-PCL column was also investigated by separation of the isomer mixtures of propylbenzene, butylbenzene, and dichlorobenzene after the column was conditioned up to each of the temperatures of 180–240 °C in 20 °C increment for 2 h, respectively. Figure 5b illustrates the effect of the conditioning temperatures on the retention times of the isomers and shows no significant variations (RSD < 2.5%) over the temperature range, suggesting its good column thermal stability up to 220 °C. For the separation of analytes with higher boiling points, PCL materials of higher thermal stability are needed to be further investigated.

2.7. Applications for Determination of Isomer Impurities in Real Samples

In view of the excellent separation performance of the PCL-PEG-PCL column for isomers, we applied it for the detection of isomer impurities in commercial reagent samples. Figure 6a–f provides the results for the determination of the reagent samples of cis-decahydronaphthalene, trans-decahydronaphthalene,1-pentanol,3-methyl-1-butanol,1,2,4-trichlorobenzene, and isopropylbenzene, respectively. Table 3 summarizes their content results by peak area normalization method. Except for 3-methyl-1-butanol and 1,2,4-trichlorobenzene, the measured purity of the samples was consistent with the labeled values, demonstrating the good potential of the PCL-PEG-PCL column for practical applications in GC analysis.

3.3. Fabrication of the PCL-PEG-PCL Capillary Column

Herein, we present the first example of employing amphiphilic block copolymer PCL-PEG-PCL as a stationary phase for capillary GC separations. Statically coated PCL-PEG-PCL column without any deactivation exhibited good separation performance and column inertness for analytes of different types with good peak shapes, including those that are labile to peak tailing. Also, the PCL-PEG-PCL stationary phase exhibited high selectivity and resolving capability for positional, structural, and cis-/trans-isomers with wide ranging polarity. The advantageous separation capability of the PCL-PEG-PCL stationary phase may derive from its unique amphiphilic structure and comprehensive molecular interactions including H-bonding, dipole–dipole, and dispersion interactions. Moreover, the PCL-PEG-PCL column was applied for the determination of minor isomer impurities in real samples, showing promise for practical analysis. This work may encourage more research and applications of amphiphilic block copolymer in separation science. 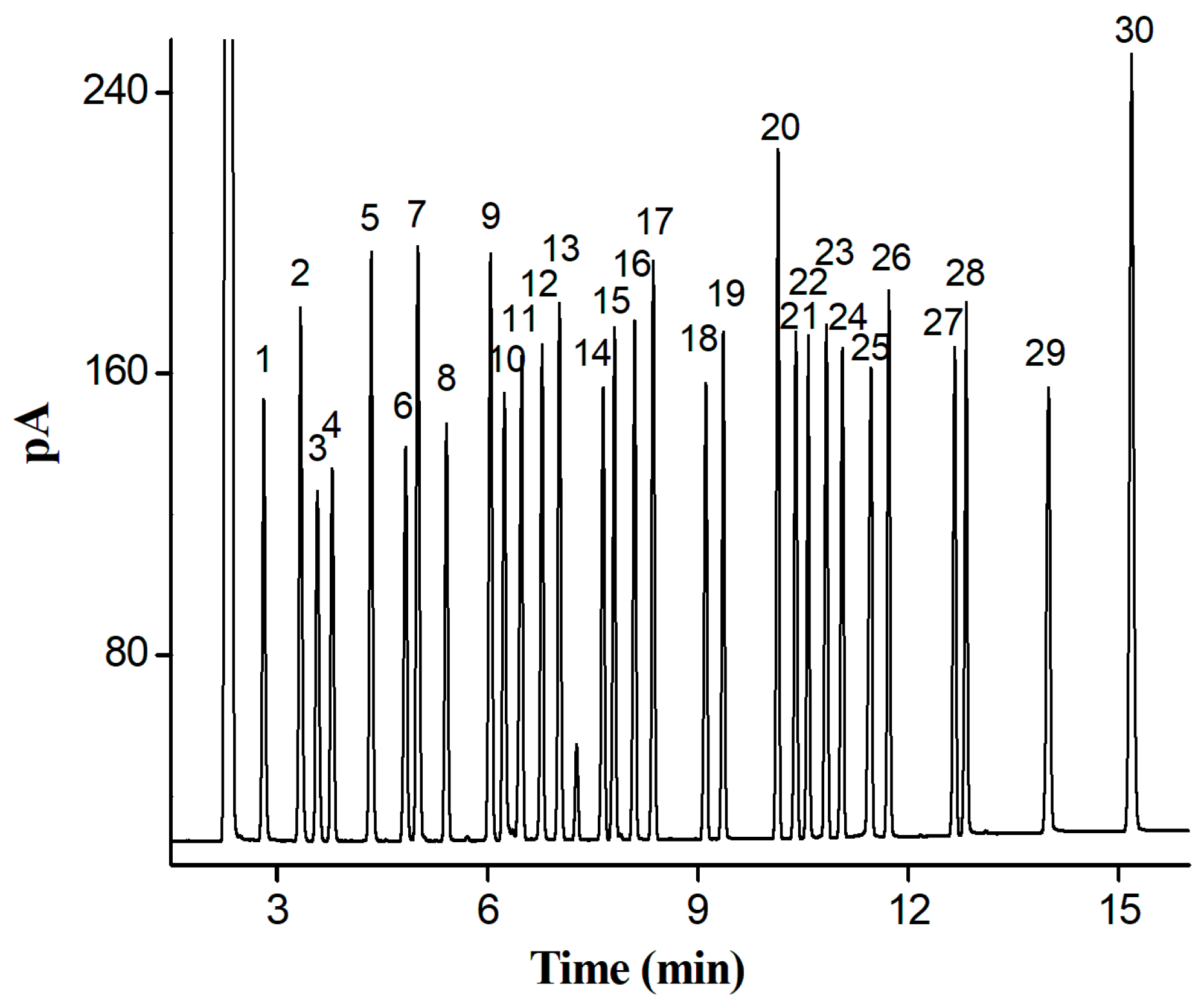 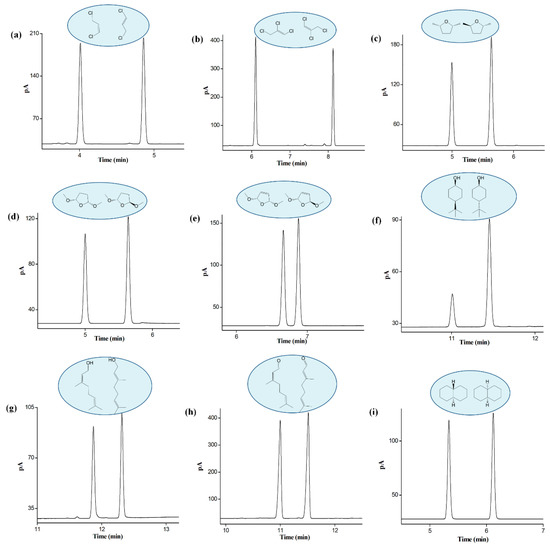 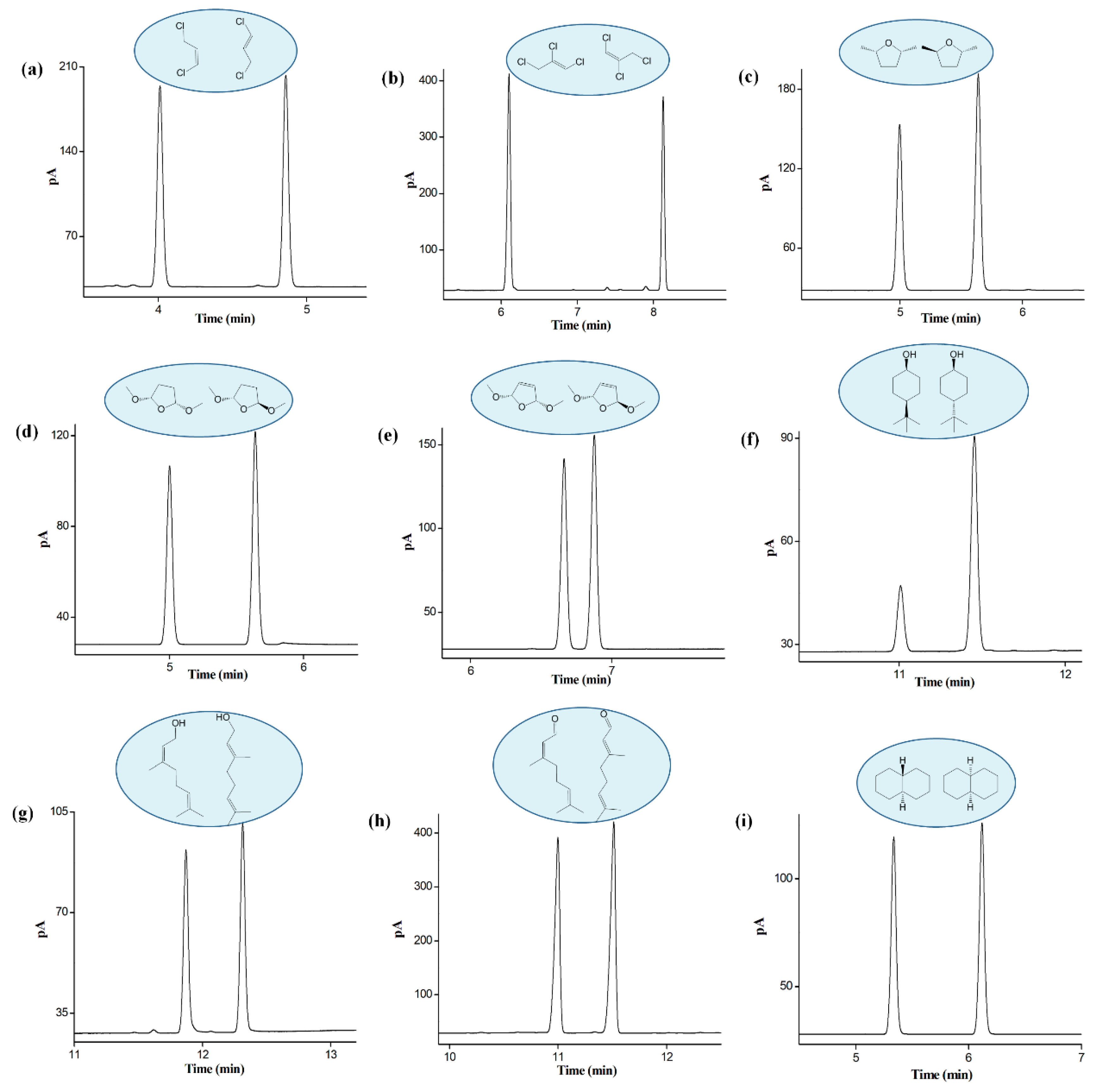