Comparison of Physicochemical, Microbiological Properties and Bioactive Compounds Content of Grassland Honey and other Floral Origin Honeys
Next Article in Special Issue

by Abul Bashar Mohammad Giasuddin and

Organosilanes (e.g., R’-SiOR3) provide hydrophobic functionality in thin-film coatings, porous gels, and particles. Compared with tetraalkoxysilanes (SiOR4), organosilanes exhibit distinct reaction kinetics and assembly mechanisms arising from steric and electronic properties of the R’ group on the silicon atom. Here, the hydrolysis and condensation pathways of n-propyltrimethoxy silane (nPM) and a tri-fluorinated analog of nPM, 3,3,3-trifluoropropyl trimethoxy silane (3F), were investigated under aqueous conditions at pH 1.7, 2.0, 3.0, and 4.0. Prior to hydrolysis, 3F and nPM are insoluble in water and form a lens at the bottom (3F) or top (nPM) of the solutions. This phase separation was employed to follow reaction kinetics using a Turbiscan instrument to monitor hydrolysis through solubilization of the neat silane lens while simultaneously tracking condensation-induced turbidity throughout the bulk solution. Dynamic light scattering confirmed the silane condensation and particle aggregation processes reported by the turbidity scanning. Employing macroscopic phase separation of the starting reactants from the solvent further allows for control over the reaction kinetics, as the interfacial area can be readily controlled by reaction vessel geometry, namely by controlling the surface area to volume. In-situ turbidity scanning and dynamic light scattering revealed distinct reaction kinetics for nPM and 3F, attributable to the electron withdrawing and donating nature of the fluoro- and organo-side chains of 3F and nPM, respectively.
Keywords: organosilane; fluorosilane; ORMOSIL; hydrophobic nanoparticle; aqueous sol-gel synthesis; Turbiscan organosilane; fluorosilane; ORMOSIL; hydrophobic nanoparticle; aqueous sol-gel synthesis; Turbiscan

Tri-alkoxysilanes, R’Si(OR)3, are widely employed to introduce functionality via the R’ chemistry into sol-gel processes, with specific applications as adhesion promoters and cross-linkers, as resin precursors, and to capture and encapsulate biological molecules [1,2]. For alkyl or aryl R’-groups, the resulting particles or gel are referred to as organically modified silicas (ORMOSILs). When fluorine is present on the R’ chain, they may be referred to as F-ORMOSILs. The hydrophobic alkyl- and fluoro R’ groups lower the surface energy of the resulting sol-gel based thin films, gels, or particles, and have been widely explored to create non-reflective, non-fouling, and superhydrophobic materials [3,4,5,6,7,8,9,10,11].
The hydrolysis and condensation chemical reactions generally occur through nucleophilic substitution reactions, with water attacking the Si center to liberate alcohol. Methoxy and ethoxy moieties are the two most common alkoxy leaving groups, and their hydrophobicity renders alkyl- and fluoro-silane precursors insoluble in aqueous solution. An R’ alkyl- or fluoro-group on the silane further reduces solubility, and an organic cosolvent, such as ethyl alcohol, is frequently employed to improve solubility and control reaction pathways. The sol-gel reactions for a trialkoxy ORMOSIL are depicted as:
At a minimum, for complete hydrolysis, three moles of water are required per mole of trialkoxysilane. Excess water, along with acid catalysis, favors full hydrolysis (030) prior to initiation of condensation. Controlling the reaction rates of tri-alkoxysilane hydrolysis and condensation affords control over the size and morphology of polycondensation products that assemble into nanoparticles (sol) that may undergo growth/aggregation into larger particles and form gels depending on reaction conditions, such as acid or base catalysis, as illustrated in the reaction diagram in Figure 1. In the reaction scheme, (x,y,z) report the status of hydrolysis and condensation
On a given Si atom, x indicates the number of alkoxy (-OR) leaving groups present, y the number of (-OH) groups, and z the number of (-O-Si) groups, as depicted in the schematics. Thus, for a trialkoxysilane under acid catalysis, the precursor (300) follows a stepwise hydrolysis to form (210) to (120), and (030) products. Under basic conditions, condensation pathways are promoted, yielding higher dimensional products earlier in the reaction. The reaction schematics shown for trialkoxysilane precursors that yield ORMOSIL and F-ORMOSIL are also descriptive of tetraalkoxysilanes, e.g., (400). While the same rules for acid and base catalysis apply, there are some key distinctions.
The sol-gel reactions and final products formed from alkyl- and fluoro-trialkoxysilanes are distinct from tetraalkoxysilanes. First, and most notably, the chemical cross-linking capacity to form siloxane (Si-O-Si) bonds is reduced. Thus, for complete condensation (003), the chemical structure is R’SiO1.5, referred to as a silsesquioxane, in contrast to the SiO2 chemistry for a fully condensed tetraorthosilicate (004). Second, hydrophobic interactions (Si-R’ ~ ‘R-Si) influence the silane solubility and physical stabilization that is highly dependent on solvent, which in turn influences sol-gel kinetics. For example, in aqueous solution, the fully hydrolyzed (030) product exhibits an amphiphilic character, which, depending on R’ chain length, may promote self-assembly that is not possible for tetraalkoxysilanes [12,13]. Third, the steric and electronic properties of the R’ group on the silicon atom influence nucleophilic substitution. Both hydrolysis and condensation reaction rates will be reduced if the R’ group restricts access to the Si atom, thus hindering nucleophilic attack by water (reaction 1) and silanol (reactions 2 and 3). However, through inductive effects, the R’ group can stabilize partial and formal charges that may exist in transition states (TS) during these same nucleophilic substitution reactions. When the R’ group contains electron-withdrawing fluorines, a negatively charged TS would be stabilized as the charge is distributed away from the reaction center. In contrast, an electron providing an R’ group accelerates silane hydrolysis under acidic conditions, where a positively charged TS may arise, but slows hydrolysis under base catalysis due to the anticipated negatively charged TS [14]. Thus, while both fluoro- and alkyl-R’ groups are employed to introduce a hydrophobic character into the resulting condensation product, the electron donating ability of an alkyl R’ group vs. the electron withdrawing nature of a fluoro-containing R’ group lead to differences in reaction rates, which in turn may affect the sol-gel kinetics and thus the size and polydispersity of the condensation products, as well as the porosity and surface area of gels.
In the present work, ORMOSIL and F-ORMOSIL sol-gel kinetics are investigated at acidic pH in water without a cosolvent, thus creating an interface between the neat silane and the aqueous reaction solution. The macro silane/water interface is used here to track the hydrolysis and condensation of the ORMOSIL, n-propyltrimethoxy silane (nPM), and the F-ORMSIL analog, 3,3,3-trifluoropropyl trimethoxy silane (3F), as illustrated in Figure 2. During hydrolysis, the solubility balance is tipped as the hydrophobic alkoxy leaving groups are replaced with silanol moieties, thus depleting the neat silane that resides as an insoluble phase on top of the water for nPM, and at the bottom of the reaction vessel for the denser 3F. This two-phase reaction system permits in-situ light transmission analysis of hydrolysis and condensation, using turbidity scanning to monitor transmitted and reflected light at defined height increments in the reaction tube. Hydrolysis is reported as an increase in transmission through depletion of the oily lens of neat silane precursor. Condensation correlates to a decrease in transmission as a cloudy sol is formed. Condensation is further confirmed in-situ using dynamic light scattering. Distinct reaction kinetics and assembly mechanisms are observed for nPM and 3F that are attributed to differences in steric and electronic properties of the respective alkyl- or fluoro-groups attached to the silicon atom. At the investigated pH values of 1.7, 2, 3, and 4, these techniques reveal a faster hydrolysis for nPM than 3F, with an opposite trend observed during condensation at the same pH.

Hydrolysis and condensation behavior of nPM (0.4 M) and 3F (0.4 M) at pH 1.7, 2.0, 3.0, and 4.0 were followed by measuring the transmissivity of light (850 nm) through the samples using a Turbiscan instrument (Turbiscan Classic, MA200, L’Union, France), and data were analyzed using Turbisoft 1.2.1. All solutions were prepared as described in the previous paragraph, and the pH 4.0 solution was 0.1 mM HCl. All solutions were placed in the Turbiscan tubes to a height of 35 ± 0.5 mm, and transmissivity was measured as a function of time. Transmissivity was measured throughout the height of the solution in the tubes for 12 to 96 h, and measurements were taken at 2 to 22 min intervals, depending on the pH of the solutions, which influenced reaction rates. Data were plotted using Sigma Plot 10.0. Videos of the Turbiscan-obtained data were prepared using MATLAB R2018b.

Evolution of polymeric NPs during nPM and 3F hydrolysis and condensation were analyzed by DLS (DynaPro NanoStar, Wyatt Technology Corporation, Santa Barbara, CA, USA), with a 658 nm laser. Measurements were taken using a quartz cuvette (JC-426, 1 µL) with 0.7 mL of nPM (0.1 M) and 3F (0.1 M) solution at pH 1.7 and 3.0. The silane concentrations of nPM (0.4 M) and 3F (0.4 M) used in the Turbiscan analysis were too high for the DLS instrument to measure single scattering events. Furthermore, the sol-gel reactions reported through DLS cannot be directly compared with those obtained from turbidity scanning due to differences in the geometries of the sample tubes and cuvettes used for Turbiscan and DLS, respectively. The data were recorded as an average of 10 five-second acquisitions. Hydrodynamic radii (Rh) of polymeric NPs were obtained using Dynamic software (version 7.0.3, Wyatt Technology Corporation, Santa Barbara, CA, USA), where the Stokes–Einstein equation was applied to convert the intensity auto-correlation into particle sizes. Inner geometry of the quartz cuvette was circular in shape and the DLS laser light was passed through approximately 1/3 of the height of the cuvette bottom.

The sol-gel kinetics of a short chain alkyl-silane, nPM, and fluorinated analog, 3F, were investigated in aqueous solutions using turbidity scanning. The immiscibility of the silanes in water creates a reaction interface that scatters incident light, allowing the dissolution of the insoluble silane lens through hydrolysis to be tracked. Simultaneously, the technique tracks condensation by scanning through the height of the tube to monitor condensation product-induced light scattering in the bulk solution. The trifluoro-propyl moiety renders 3F denser than water, creating the reaction interface in the bottom of the reaction tube whereas the non-fluorinated nPM resides on top of the water. For 3F, this creates some potential interference as condensation products aggregate and settle toward the bottom of the tube. The electron-withdrawing fluoro-groups also accelerate the condensation of 3F compared to nPM. The use of optical turbidity scanning and the dynamic light scattering technique showed the distinct pattern of the hydrolysis and condensation kinetics of nPM and 3F.

The conceptualization, methodology, validation, and formal analysis were conducted by A.B.M.G. and D.W.B.; A.B.M.G. performed the experiments and prepared the original draft, with D.W.B. providing review and editing. D.W.B. secured funding for this research.

This research was funded by the Utah State University Agriculture Experiment Station, Project 1052.

This research was supported by the Utah Agricultural Experiment Station, Utah State University, and approved as journal paper number #9229. We would like to thank Akhter Mahmud Nafi from the Mechanical and Aerospace Engineering department of USU for his contribution in the Turbiscan kinetic animations. 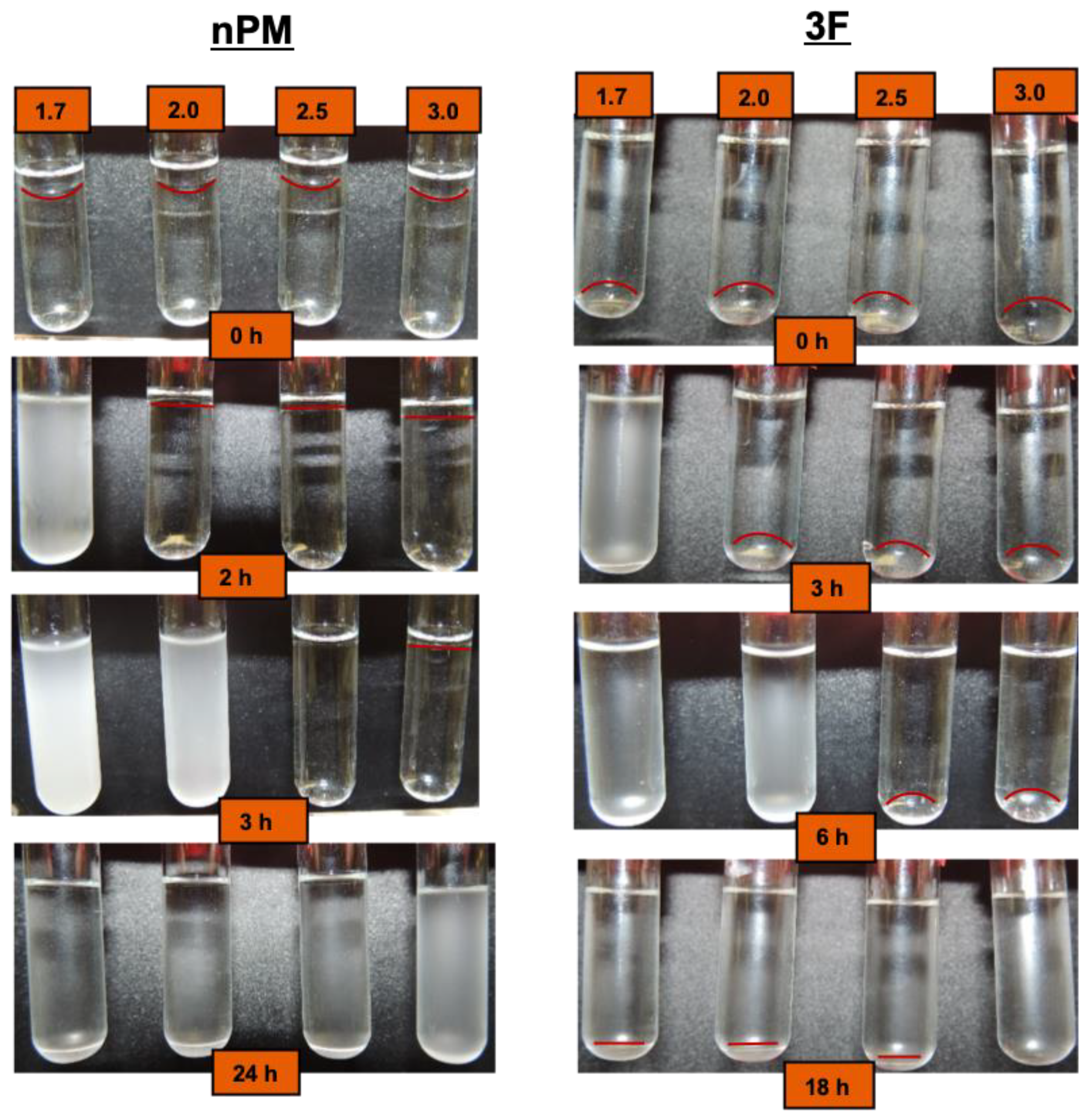 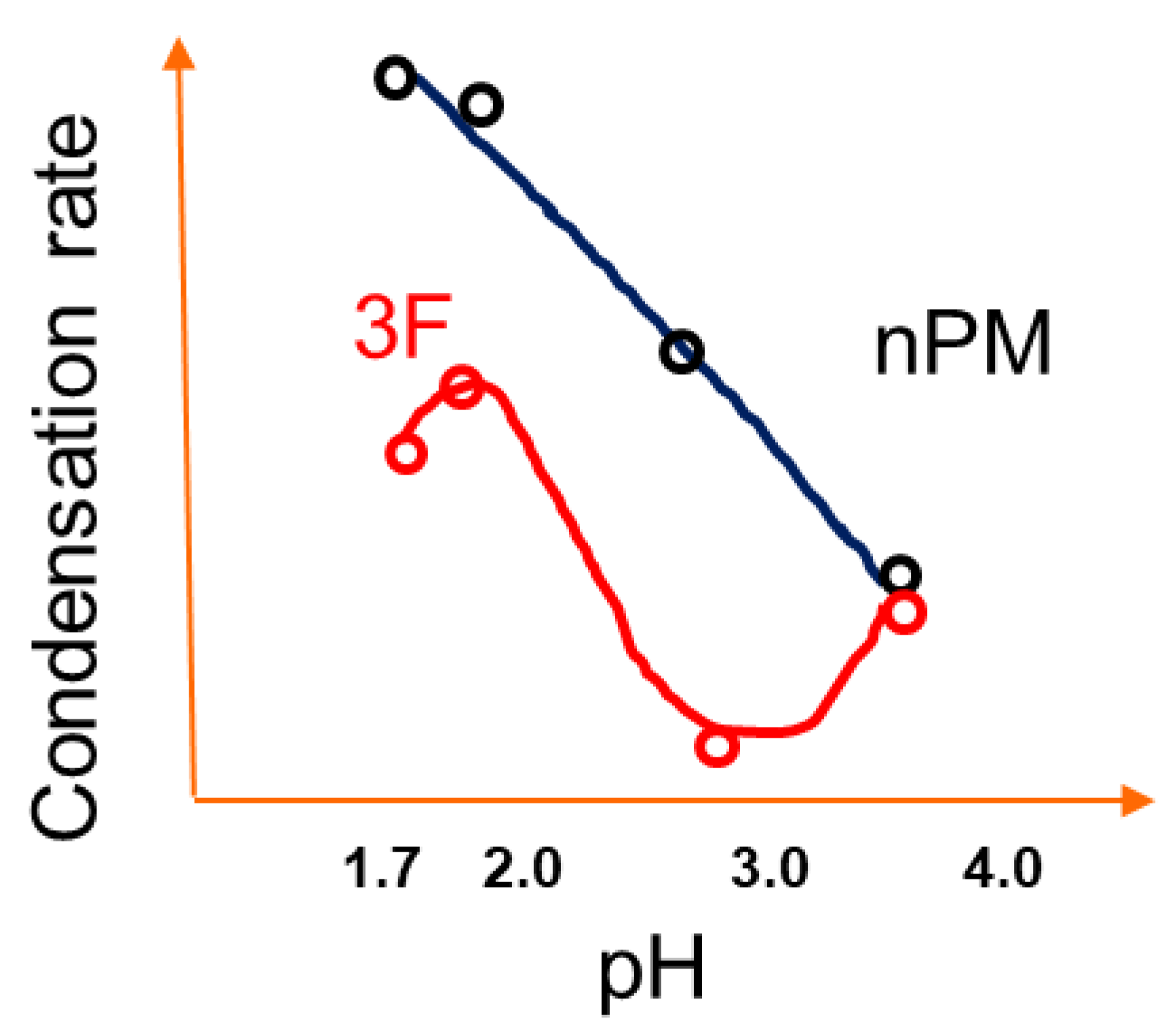