Actinofuranones D-I from a Lichen-Associated Actinomycetes, Streptomyces gramineus, and Their Anti-Inflammatory Effects

The Effect of Ultrasound, Oxygen and Sunlight on the Stability of (−)-Epigallocatechin Gallate

(−)-Epigallocatechin gallate (EGCG), is the main catechin found in green tea [1]. Many studies have reported its potential health benefits, including anti-inflammatory [2,3], and antioxidant actions [4] as well as the prevention of cancer and cardiovascular diseases [5,6,7] in cells, animal models, and even humans. EGCG is also known to have antimicrobial effects against both Gram-negative and Gram-positive bacteria by damaging their cell membranes, which results in the downregulation of enzymes involved in biosynthesis and the prevention of bacterial adherence to their host cell [8]. Thus, EGCG can decreases the production of toxic bacterial metabolites [8]. Based on its proven health benefits, EGCG appears to have a substantial potential for use in medical applications.
However, EGCG is seldom used in the medical field, possibly due to its instability. In solution, EGCG donates hydrogen atoms, leading to the generation of superoxide and oxidized products. Subsequently, this causes the formation of theasinensin A and compound P2 as the major dimers, which may be the reason for the change in color of EGCG aqueous solution to brown [9]. Aqueous EGCG solution is highly unstable, as EGCG can easily degrade through oxidation and epimerization [10,11]. The rates of these two reactions are affected by many factors, such as the presence of oxygen or sunlight, as well as changes of temperature, pH and ionic strength [9,12,13]. In air-saturated buffer, EGCG undergoes auto-oxidation, forming H2O2 [11,14], while under low oxygen partial pressure, generated by extensive flushing with nitrogen gas, EGCG has shown to be stable, with 95% remaining after 6 h [15,16]. As for the pH level, the acidic environments enhance the stability of EGCG, but neutral and alkaline pH level cause auto-oxidation on the B-ring and produce theasinensin A and product P2 [17,18]. In addition, previous studies have reported that following exposure to a solar simulator emission, EGCG almost completely degrades within an hour [12,13]. The activity of EGCG is also dependent on the salt concentration of ambient medium, the degradation EGCG increases with rising ionic strength of the solvent. In addition, temperature is a significant parameter governing EGCG stability and the mode of its degradation [19,20,21]. Several works have suggested that EGCG undergoes degradation via oxidation at temperatures below 50 °C, while epimerization was more commonly occurs at higher temperatures [19,22,23]. Through epimerization, EGCG transforms to its trans-epimer (−)-gallocatechin gallate (GCG) [14,15,22,24], while epimerization of EGCG should not significantly alter its biological effects [25,26,27].
The stability of EGCG is affected by many factors, limiting its application in many cases; however, we hope to apply EGCG to periodontitis treatment. Periodontitis is one of the major oral inflammatory diseases, encountered in routine dentistry practice [28]. The imperative factor behind the pathogenesis of periodontal infections is the accumulation of dental plaque, which results in gingival inflammation [29]. EGCG has already been used in some clinical experiments as a mouthwash [30,31] and a local drug route [32,33,34], which showed that it has a healing effect on periodontal tissue. As ultrasonic dental scalers are widely used in the treatment of periodontitis, they are a potential delivery route for EGCG. However, before using this approach, it is necessary to investigate the stability of EGCG under ultrasound conditions to determine whether the stability of EGCG is affected by ultrasound itself, or whether it is influenced by sunlight or oxygen.

2.1.2. Linearity and Lower Limit of Quantification (LLOQ) of EGCG in Water

2.3. Analysis of Stability of EGCG Solution Atomized by the Ultrasonic Dental Scaler

Analytical conditions. Prior to the analysis, all samples were filtered by 0.22 μm membrane syringe filters. Chromatographic analysis was performed on a Waters 2695 Series (Waters Technologies Shanghai Limited, Shanghai, China) LC system containing a quaternary pump, an online degasser, an autosampler, and a thermostatic column compartment set at 30 °C. Chromatographic separation was conducted on a Waters XSelect HSS T3 C18 column (4.6 mm × 250 mm, 5 μm). A gradient method was employed using mobile phase A consisting of distilled H2O, acetonitrile, acetic acid, and EDTA (888/90/20/2, v/v/v/v) and phase B consisting of distilled H2O, acetonitrile, acetic acid, and EDTA (178/800/20/2, v/v/v/v). The initial ratio is 100% A (10 min). Subsequently, the solvent composition was changed to 68/32 (A/B 15 min) and 100% A (10 min). The flow rate was 1 mL/min, and the injection volume was 10 μL. The UV detection wavelength was 278 nm [40].
Selectivity and Specificity. For the chromatographic method, developing a separation involves demonstrating specificity, which is the ability of the method to accurately measure the analyte response in the presence of all interferences. EGCG aqueous solution samples were prepared according to the procedures described above and analyzed.
Linearity. The calibration curve of HPLC method was evaluated by analyzing a series of standard EGCG aqueous solution samples at concentration from 0.005 to 2.5 mg/mL. The determination coefficient (R2) was calculated by means of the least-square analysis. The lower limit of quantification (LLOQ) is the lowest concentration of EGCG in a sample that can be determined with acceptable precision and accuracy.
Precision and Accuracy. Intra-day/inter-day accuracies and precisions of the method were evaluated by analyzing samples at 2 concentration levels in 4 replicates during a single day and in duplicate over 2 consecutive days. The precision was represented by relative standard deviation (RSD). The accuracies were determined by calculating the percentage of measured concentrations to the nominal concentrations of samples.

The EGCG aqueous solution was prepared with distilled H2O. In order to prevent sunlight and air entering the solution, we used glass bottles wrapped up with tinfoil. After adding the pre-weighed EGCG power into the bottle, it was diluted with distilled H2O to full of bottle, and then the cap was tightened immediately. A series concentrations (0.05, 0.10, 0.15, 2.00 mg/mL) of EGCG aqueous solutions were prepared at room temperature (25–28 °C), with each concentration was divided into four conditions as follows: (A) exposed to neither sunlight nor air (tightened the cap of bottle and wrapped the bottle with tinfoil), (B) exposed to sunlight but not air (tightened the cap but did not wrap the bottle), (C) not exposed to sunlight but air (opened the cap and wrapped the bottle with tinfoil), and (D) exposed to sunlight and air (opened the cap but did not wrap the bottle). The diameter of the bottle mouth was about 1 cm, and the illumination intensity was about 300–500 lux. Each concentration of EGCG solution was stored under conditions A to D, respectively, for 6 h, 12 h, 24 h, 36 h, and 48 h, and the residual concentration of EGCG was measured with HPLC. The whole experiment was performed in the laboratory at room temperature (25–28 °C).

A group t-test was used to compare the significance of the differences between the groups of residual EGCG in EGCG aqueous solutions atomized by ultrasound, and a p-value < 0.05 was accepted as significant. Data are expressed as the mean value ± standard deviation (mean ± SD) (n = 3).

It is well known that EGCG has various benefits to health and great potential for medical applications. The present study was a preliminarily examination of its stability under storage and ultrasonic conditions. The limitation of the present study is that temperature, pH and ionic strength were not involved. In general, EGCG was shown to be highly unstable in water at room temperature, and it was more susceptible to oxygen in air than sunlight. Thus, more effort should be paid to the isolation of EGCG from air during storage. Moreover, the stability of EGCG dropped as its concentrations decreased; thus, it was shown to be concentration-dependent in water at room temperature. Ultrasound may accelerate the degradation of EGCG because EGCG in aqueous solution can have extreme contact with oxygen and sunlight, rather than because of the ultrasonic vibration. Thus, the EGCG aqueous solution has the potential to be used through an ultrasonic dental scaler to treat periodontal infection in the future.

J.Z., Q.L. conceived the study and contributed to the planning and the design of the study; J.Z., H.X. and Y.G. collected the data and conducted data derivation and analyses; J.Z., Y.C., Y.X. and Q.L. contributed to the statistical analyses; J.Z. wrote the manuscript; H.X., Y.C., Y.X., J.L., Y.G. and Q.L. supplied comments; All authors read and approved the final manuscript.

This research was funded by [National Nature Science Foundation of China] grant number [8140030482].

We would like to thank Ming Zheng for providing the laboratory in Peking University Health Science Center. 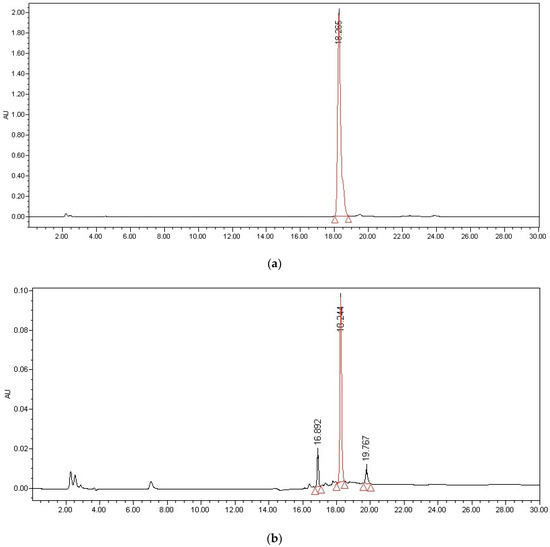 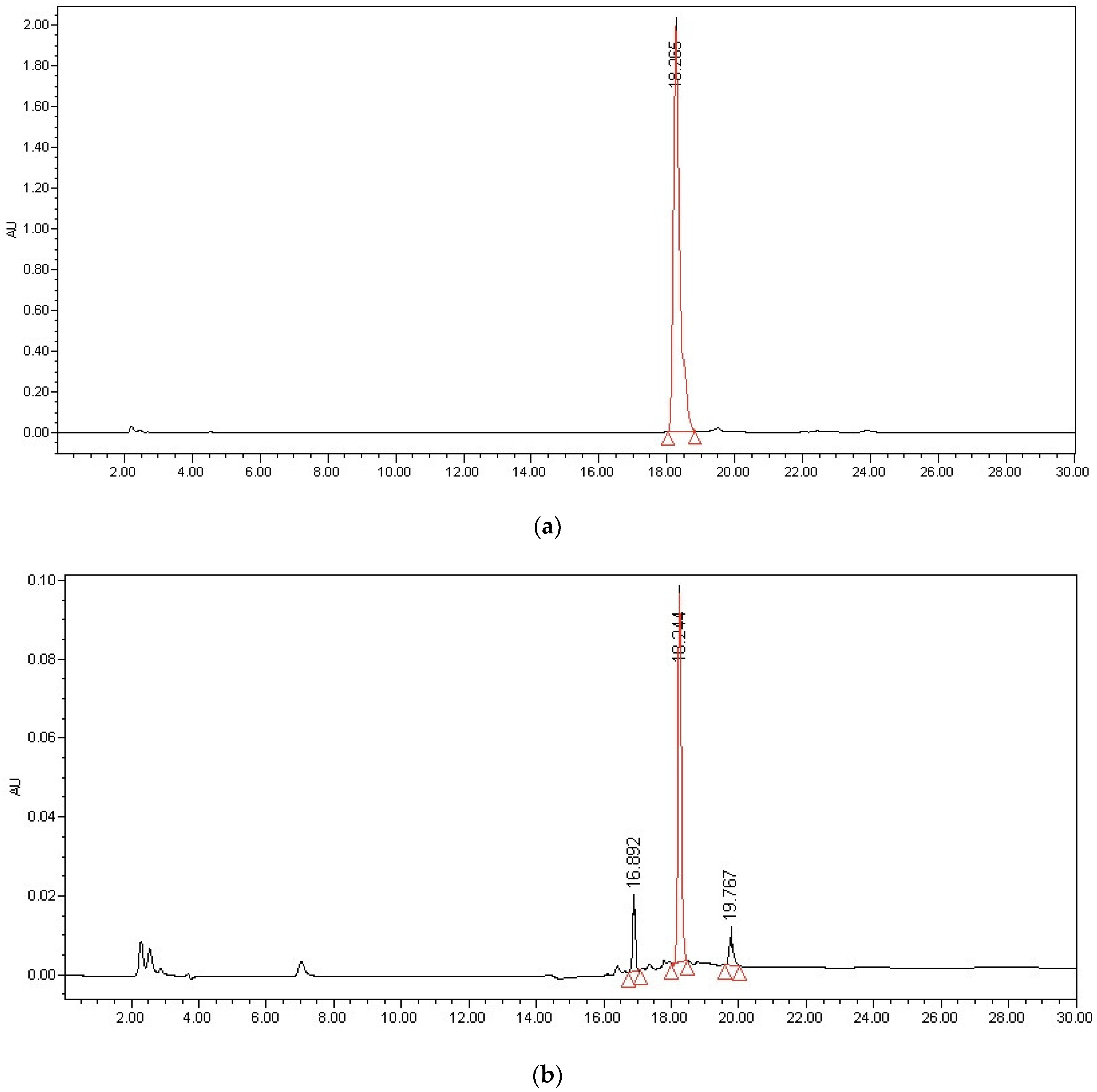 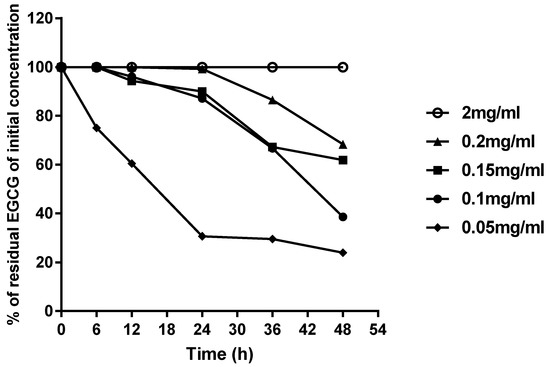 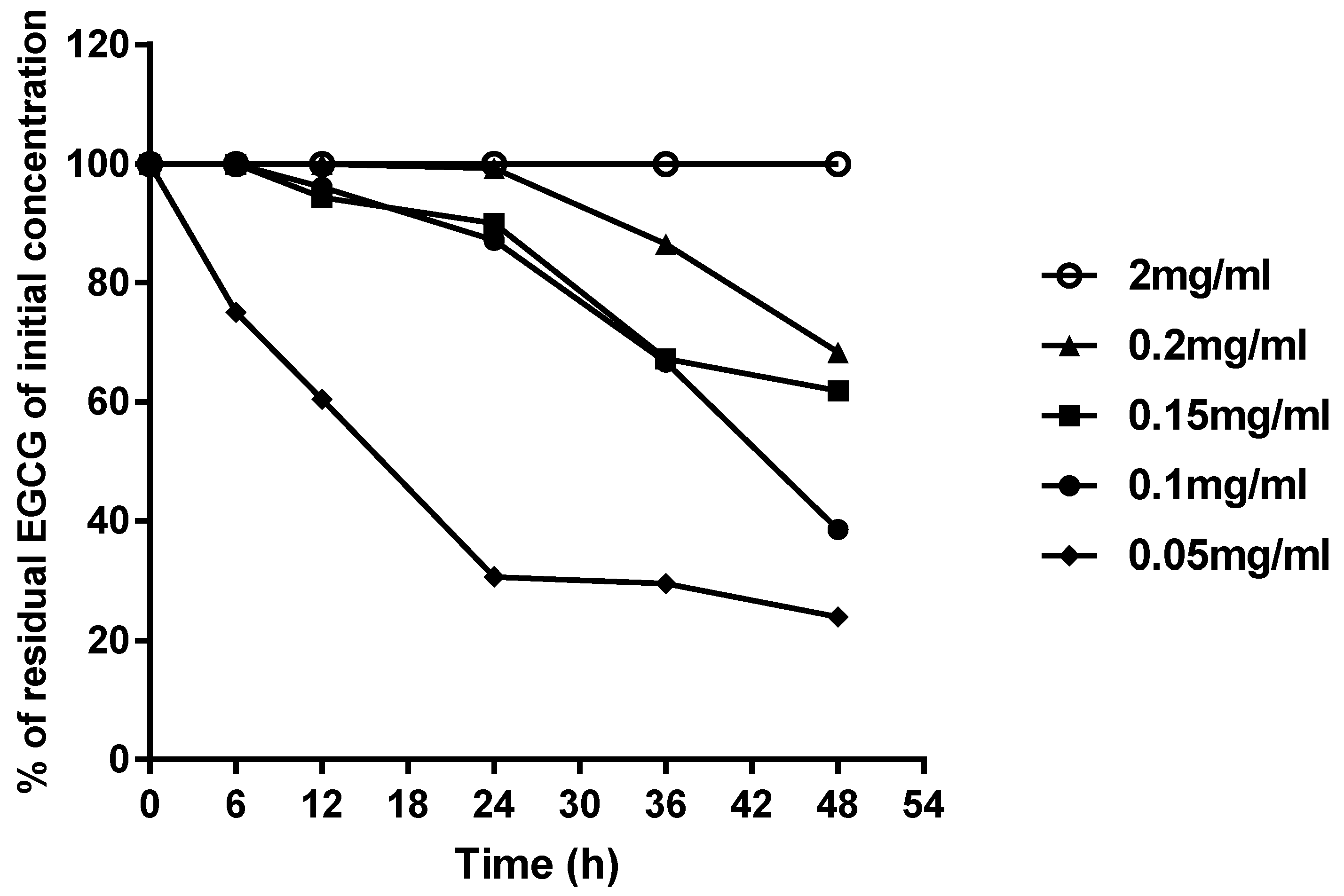 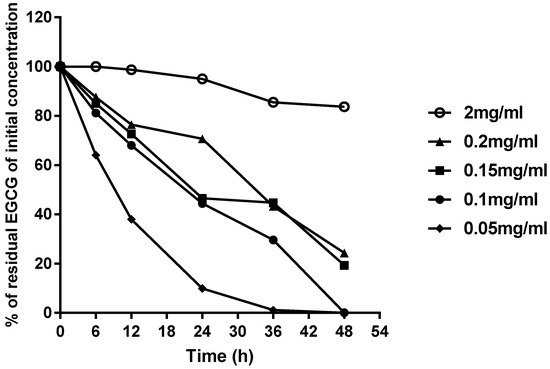 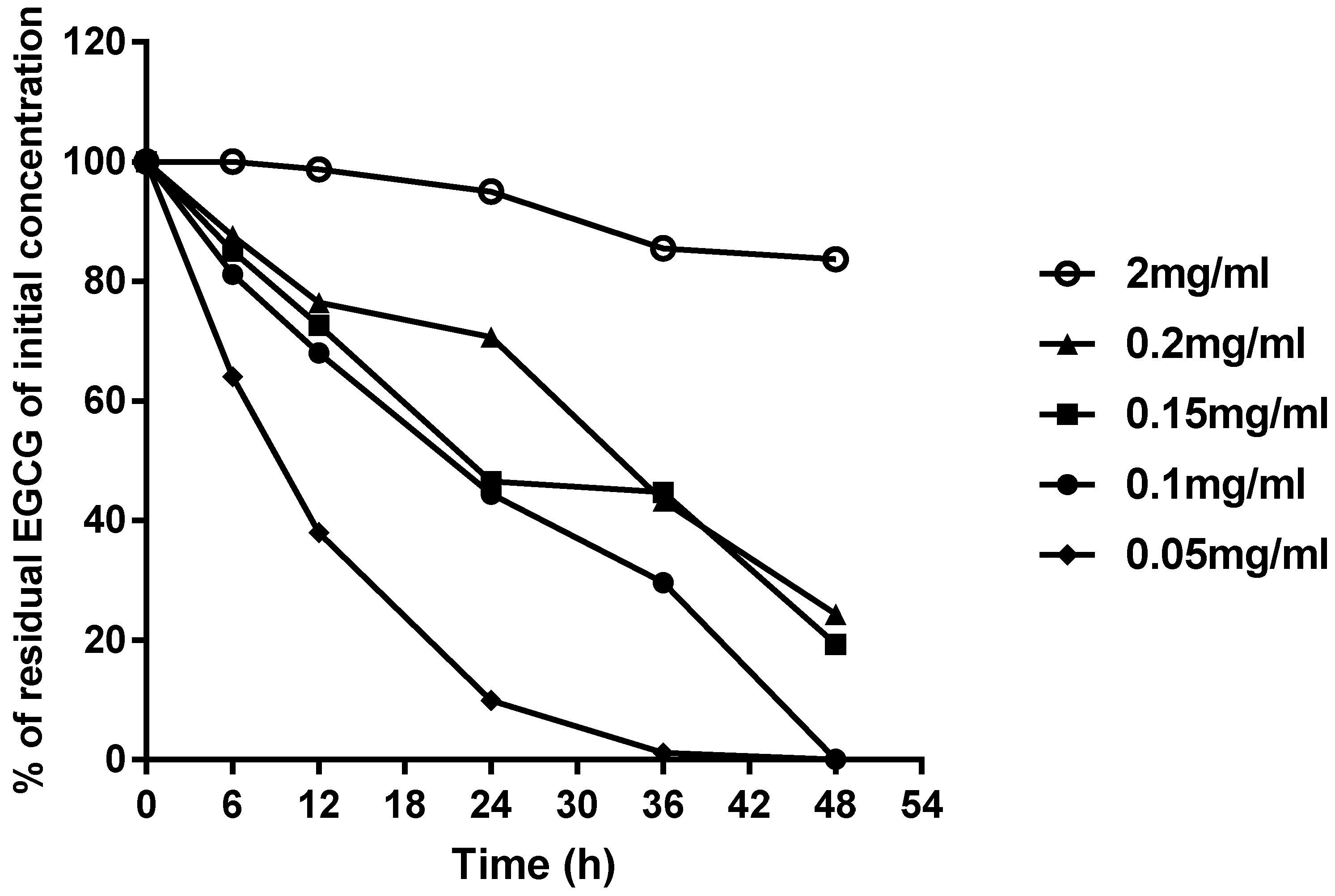