Fatty acid amide hydrolase (FAAH) inhibitor [3-(3-carbamoylphenyl)phenyl] N-cyclohexylcarbamate (URB597) may influence redox balance and blood pressure through the modulation of endocannabinoids levels. Therefore, this study aimed to compare changes in oxidative metabolism and apoptosis in the hearts of rats with spontaneous hypertension (SHR) and secondary hypertension (11-deoxycorticosterone acetate; DOCA-salt rats) treated by URB597 via intraperitoneal injection for 14 days. The results showed that URB597 decreased the activity of NADPH and xanthine oxidases in both groups of rats. Moreover, in the heart of SHR rats, URB597 led to an increase of enzymatic and nonenzymatic antioxidant activity and levels (catalase, vitamin C, glutathione/glutathione disulfide [GSH/GSSG]) and upregulation of the thioredoxin system; however, NRf2 expression was downregulated. The opposite effect in relation to Nrf2 activity and the thioredoxin system was observed in DOCA-salt rats after URB597 administration. Despite improvement in antioxidant parameters, URB597 enhanced oxidative modifications of phospholipids (4-hydroxynonenal and isoprostanes) and proteins (carbonyl groups) in SHR heart, whereas 4-hydroxynonenal and carbonyl groups levels decreased in the heart of DOCA-salt rats. Obtained results suggest that examined lipid mediators are involved in peroxisome proliferator-activated receptors (PPAR)-independent and PPAR-dependent modulation of cardiac inflammatory reactions. Furthermore, decreased expression of pro-apoptotic proteins (Bax and caspase 3 and 9) was observed after URB597 administration in the heart of both groups of hypertensive rats, whereas expression of the antiapoptotic protein (Bcl-2) increased in SHR rats. Long-term administration of URB597 altered cardiac redox status depending on the type of hypertension. URB597 enhanced oxidative metabolism and reduced pro-apoptotic factors in the heart of SHR rats, increasing the probability of heart metabolic disorders occurrence or progression.
Keywords: heart; URB597; hypertension; oxidative stress heart; URB597; hypertension; oxidative stress

Hypertension is recognized as the most significant risk factor for cardiovascular diseases. Reactive oxygen species (ROS) play an important role in the redox control of physiological signaling pathways in cardiac cells and the vascular wall. Thus, ROS can also contribute to the development of hypertension [1,2], particularly if ROS activity cannot be adequately countered by cellular antioxidant defense, of which a decrease has been observed in human and in animal models of hypertension [2,3,4]. One of the major cellular processes that is enhanced by high levels of ROS, resulting in dysfunction of myocardial cells, is apoptosis [5,6]. The shift in the redox balance to oxidative conditions leads to oxidative stress in the heart and blood vessels, [3,4] enhancing lipid and protein oxidative modifications that are observed in both human and experimental hypertension [2,3,4].
Alterations in phospholipid metabolism, including the formation of ROS-dependent phospholipid peroxidation products and enzymatic metabolism of phospholipid arachidonic acid, leading to the synthesis of endocannabinoids and particularly anandamide, has been observed in hypertension [3,7,8]. Because anandamide levels are regulated by fatty acid amide hydrolase (FAAH)—a major enzyme responsible for the degradation of anandamide [9]—FAAH inhibitors are postulated to be antihypertensive agents [10]. It was previously shown that acute administration of two different FAAH inhibitors, [3-(3-carbamoylphenyl)phenyl] N-cyclohexylcarbamate (URB597) [11] and AM35-(4-hydroxyphenyl) pentanesulfonyl fluoride (AM3506) [10] to rats with primary hypertension normalized blood pressure and decreased cardiac contractility. However, chronic administration of URB597 to 11-deoxycorticosterone acetate (DOCA-salt) hypertensive rats reduced blood pressure as well as cardiac and renal hypertrophy in an age-dependent manner but not in SHR rats [12,13]. Endocannabinoids, by activation of cannabinoid receptors, are involved in the regulation of the redox balance and modulation of inflammatory processes [9,14]. Cannabinoid receptor type 1 (CB1) activation promotes oxidative stress leading to tissue injury via enhanced inflammation in human cardiomyocytes and coronary artery endothelial cells [15,16]. Nevertheless, cannabinoid receptor type 2 (CB2) prevents ROS production and reduces oxidative stress in a mouse model of myocardial ischemia/reperfusion [17]. It was also revealed that chronic administration of URB597 disturbs redox metabolism in the liver of rats with DOCA-salt induced hypertension as well as in the kidney of rats with primary or secondary hypertension [18,19].
The primary hypertension animal model corresponds to the hypertension observed in 95% of people with arterial hypertension, whereas the secondary hypertension animal model is strictly related to oxidative and inflammatory stress in the cardiovascular system and corresponds to hypertension associated with other human diseases. Therefore, the aim of this study was to examine the chronic effect of URB597 on local metabolic effects resulting from cardiac redox imbalance in rats with primary and secondary hypertension. Obtained results may allow for better understanding of the molecular processes involved in the development of both types of hypertension. In consequence, targeted pharmacotherapy for both models of hypertension may be suggested.

The experiment was performed on age-matched male rats with comparable primary hypertension (SHRs) and rats with secondary (DOCA-salt) hypertension in order to distinguish changes induced by hypertension from those related to any one particular hypertension model. The DOCA-salt model was chosen because in this model of hypertension, cardiovascular remodeling characteristic of human volume-overload is observed. Rats were housed with free access to standard pelleted rat chow and water and were maintained in a 12/12 h light/dark cycle. All procedures and experimental protocols were approved by the local Animal Ethics Committee in Białystok, Poland (resolution No. 4/2012 of 25.01.2012).

Experiments were performed on 8- to 10-week-old male SHRs (270–350 g) and normotensive control male (290–390 g) Wistar Kyoto rats (WKY).
The rats were randomly subdivided into four groups each consisting of six rats as follows:

Young male Wistar rats aged 4–5 weeks, initially weighing 100–140 g, were used in this experiment. The rats were anesthetized by an intraperitoneal (i.p.) injection of pentobarbital sodium (70 mg/kg body weight; b.w.) and unilaterally nephrectomized. After a 1-week recovery period, the animals were given twice weekly a subcutaneous (s.c.) injection of DOCA (25 mg/kg b.w. in 0.4 mL DMF/kg b.w.) for 6 weeks and given salt in the form of a 1% NaCl solution as a substitute for drinking water to induce hypertension. Control rats (normotensive Wistar rats) received s.c. injection of the vehicle for DOCA (0.4 mL DMF/kg b.w.) twice weekly for 6 weeks and drank tap water. Four weeks later, one group of DOCA-salt rats and one group of Wistar rats were injected i.p. every 12 h with URB597 (1 mg/kg b.w. in 1 mL of the URB597 solvent/kg b.w.) for 2 weeks [54,55].
The rats were randomly subdivided into four groups each consisting of six rats as follows:

Systolic blood pressure (SBP) was determined in conscious rats via the noninvasive tail-cuff method using the Rat Tail Blood Pressure Monitor from Hugo Sachs Elektronik-Harvard Apparatus (March–Hugstetten, Germany) before the first dose of URB597 or its vehicle and 12 h after the final dose. Two weeks of URB597 administration did not modify SBP in SHR and WKY but it tended to reduce SBP in DOCA-salt hypertensive rats and did not affect SBP in Wistar rats [12,13].

Twelve hours after the final dose of URB597 (or its vehicle), the rats were anesthetized with an i.p. injection of pentobarbital (70 mg/kg b.w.) and euthanized to collect tissues samples. The hearts were perfused with 0.9% NaCl and were cut in half longitudinally into two equal size and quality halves. The first part of the fresh tissue was snap-frozen, pulverized and held at −80 °C. The other part was homogenized in saline and next centrifuged at 20,000× g for 15 min at 4 °C.

NADPH oxidase (NOX EC.1.6.3.1) activity in the cardiac homogenates was measured by detecting the production of the superoxide anion by a lucigenin-derived chemiluminescence assay with NADPH as a substrate. Superoxide production is expressed in relative light units per milligram of protein (RLU/mg) [56].
Xanthine oxidase (XO EC.1.17.3.2) activity was measured as the rate of uric acid production when xanthine was incubated with tissue homogenates. One unit of XO activity was defined as 1 µmol of uric acid produced per minute at 37 °C according to absorbance at 292 nm [57].

Superoxide dismutase (Cu/Zn–SOD EC.1.15.1.1) activity was assayed according a method published elsewhere [58]. The oxidation of epinephrine was performed in terms of the production of adrenochrome, which has an absorption maximum at 480 nm. One unit of SOD is defined as the amount of the enzyme that inhibits the rate of autoxidation of epinephrine by 50%.
Catalase (CAT EC.1.11.1.9) activity was measured in cardiac homogenates by spectrophotometric analysis (at 240 nm) of the rate of hydrogen peroxide decomposition, according to a method published previously [59]. One unit of CAT is defined as the amount of the enzyme necessary to catalyze the decomposition of 1 µmol of hydrogen peroxide to water and oxygen within 1 min.
Thioredoxin (Trx) was quantified by ELISA method [60]. Spectral absorption was read at 450 nm with the reference filter set to 620 nm.
Thioredoxin reductase (TrxR EC.1.8.1.9) activity was measured by means of a commercial assay kit (Sigma-Aldrich, St. Louis, MO, USA) that colorimetrically estimates the reduction of 5,5′-dithiobis(2-nitrobenzoic) acid by NADPH to 5-thio-2-nitrobenzoic acid [61].

High performance liquid chromatography (HPLC) with ultraviolet (UV) detection was applied to quantify vitamin C [62] and vitamin A [63]. UV detection was performed at 250 nm for vitamin C and at 298 nm for vitamin A.
The levels of reduced and oxidative glutathione (GSH and GSSG, respectively) were measured according to the procedure of Maeso using capillary electrophoresis (CE). The separations were performed on a fused silica capillary with an ultraviolet detector set at 200 nm [64].

Lipid peroxidation was assessed by gas chromatography with the tandem mass spectrometry (GC-MS/MS) method published previously [65], with a modification. The method is based on the use of O-(2,3,4,5,6-pentafluorobenzyl) hydroxylamine hydrochloride (PFBHA⋅HCl) to form the O-pentafluorobenzyl-oxime (PFB-oxime) derivative of 4-hydroxy-nonenal (4-HNE). Quantitation was implemented using benzaldehyde-D6 as an internal standard in selected ion-monitoring (SIM) mode. The ions were 333.0 and 181.0 m/z for 4-HNE-PFB-TMS and 307.0 m/z for IS (benzaldehyde-D6) derivatives.
The total level of F2-isoprostanes (8-isoPGF2α) was estimated by a liquid chromatography with mass spectrometry (LC-MS) [66]. Due to the presence of a carboxylic group, electrospray ionization (ESI) operating in negative ion mode with multiple-reaction monitoring (MRM) mode provided the best sensitivity. For MRM analysis, the mass transitions 353.2→193.1 m/z for 8-isoPGF2α and 357.2→197.1 m/z for 8-isoPGF2α-d4 were selected.
Protein oxidative modifications (carbonyl groups) were determined according to the method published previously [67]. Carbonyl content was calculated from peak absorption (370 nm) using 2,4-dinitrophenylhydrazine as a reagent.
8-hydroxy-2′-deoxyguanosine (8-OHdG) was quantified by LC-MS [68], with a modification. Genomic DNA was isolated from tissue samples using a regular commercial DNA extraction kit and a standard protocol (Sigma’s GenElute Mammalian Genomic DNA Miniprep Kit, St. Louis, MO, USA). DNA concentration was measured by UV spectroscopy. 8-OHdG was analyzed in positive-ion mode with MRM. Transitions of the precursor to the product ion were as follows: 284.1→168 m/z (quantifier ion) and 284.1→69 m/z (qualifier ion).

The data are expressed as mean ± SD. Statistical comparisons were performed by two-way analysis of variance (ANOVA) followed by the post hoc Tukey test. The results were considered statistically significant if the p values were 0.05 or less. 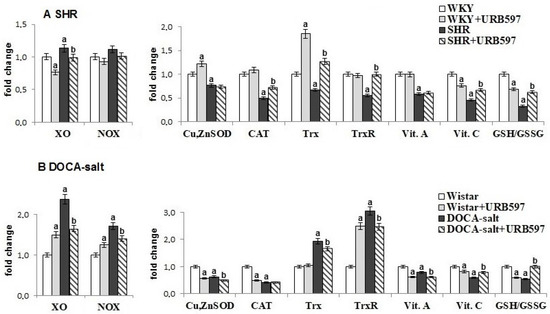 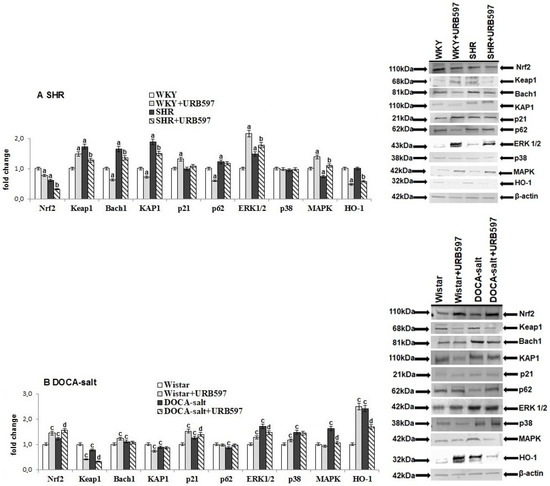 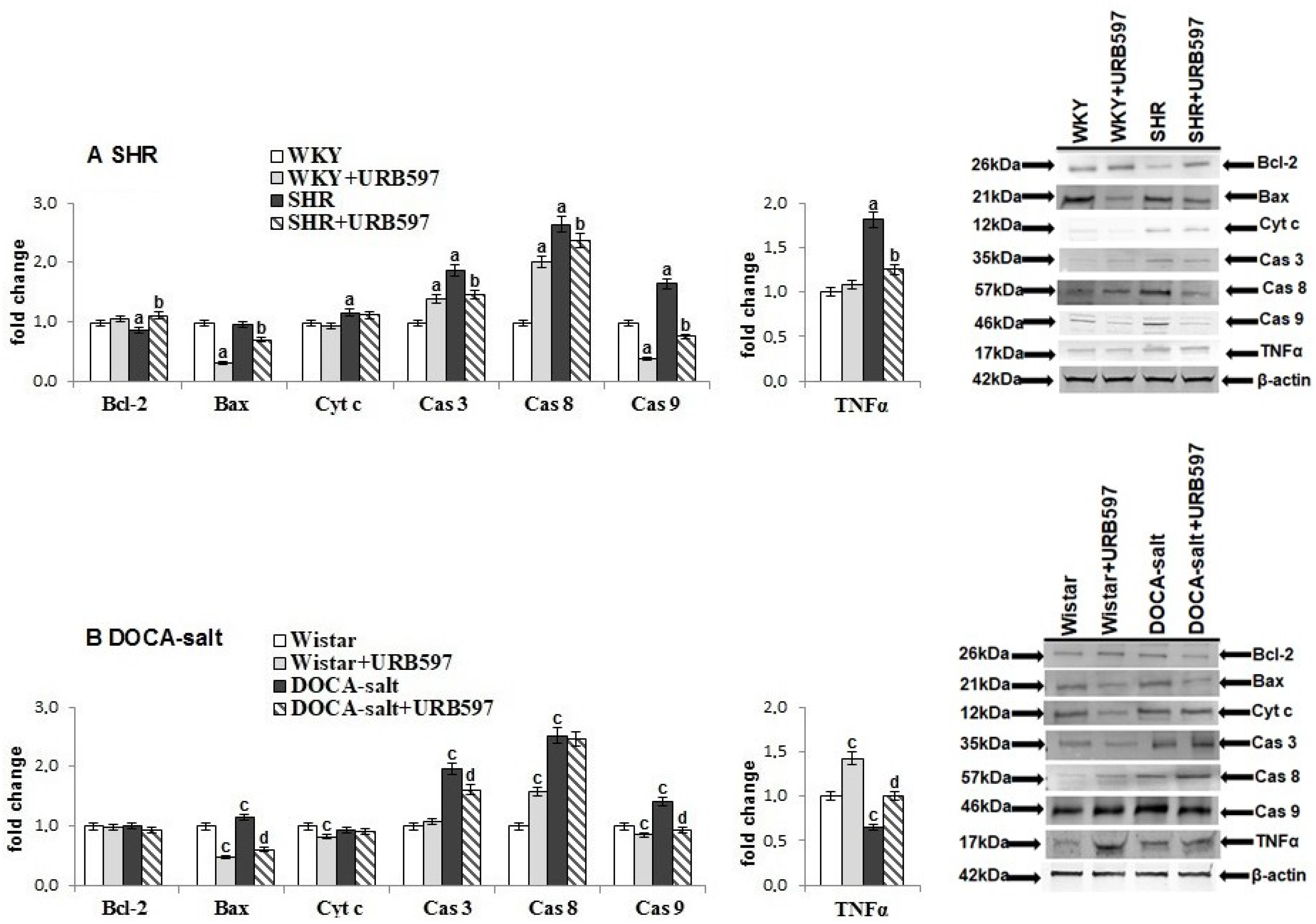