The Keap1/Nrf2-ARE Pathway as a Pharmacological Target for Chalcones

Alzheimer’s disease still represents an untreated multifaceted pathology, and drugs able to stop or reverse its progression are urgently needed. In this paper, a series of naturally inspired chalcone-based derivatives was designed as structural simplification of our previously reported benzofuran lead compound, aiming at targeting both acetyl (AChE)- and butyryl (BuChE) cholinesterases that, despite having been studied for years, still deserve considerable attention. In addition, the new compounds could also modulate different pathways involved in disease progression, due to the peculiar trans-α,β-unsaturated ketone in the chalcone framework. All molecules presented in this study were evaluated for cholinesterase inhibition on the human enzymes and for antioxidant and neuroprotective activities on a SH-SY5Y cell line. The results proved that almost all the new compounds were low micromolar inhibitors, showing different selectivity depending on the appended substituent; some of them were also effective antioxidant and neuroprotective agents. In particular, compound 4, endowed with dual AChE/BuChE inhibitory activity, was able to decrease ROS formation and increase GSH levels, resulting in enhanced antioxidant endogenous defense. Moreover, this compound also proved to counteract the neurotoxicity elicited by Aβ1–42 oligomers, showing a promising neuroprotective potential. View Full-Text
Keywords: Alzheimer’s disease; chalcones; cholinesterase inhibitors; antioxidants; neuroprotection Alzheimer’s disease; chalcones; cholinesterase inhibitors; antioxidants; neuroprotection
►▼ Show Figures 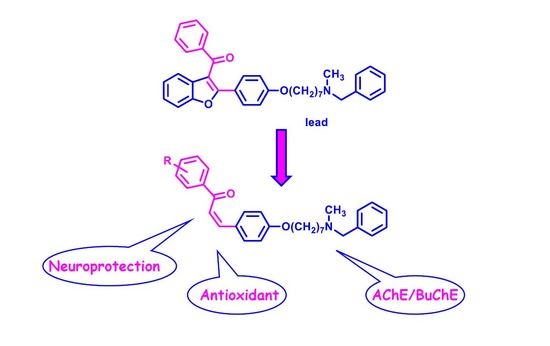