Beta-cyclodextrin (β-CD) is a cyclic oligosaccharide consisting of seven glucose units and is produced from starch using cyclodextrin glycotransferase enzymes to break the polysaccharide chain and forming a cyclic polysaccharide molecule. The use of β-CD in food research for reduction of cholesterol is increasing due to its affinity for non-polar molecules such as cholesterol. The aim of this study was to evaluate the feasibility of using β-CD in cholesterol removal from pasteurized ewe’s milk Manchego cheese and evaluate the effect on the main components of the milk, lipids, and flavor characteristics. Approximately 97.6% cholesterol reduction was observed in the cheese that was treated using β-CD. Physicochemical properties (fat, moisture and protein) were not changed by the β-CD treatment, except the soluble nitrogen and non-protein nitrogen that showed slight differences after the treatment. The amount of the different components of the lipid fraction (fatty acids, triglycerides and phospholipids) were similar in cheeses treated and not treated with β-CD. Flavor compound and short chain free fatty acids were not mostly significantly influenced by the effect of the β-CD. β-CD molecules are edible and nontoxic and as a result they can be used safely for cholesterol removal processing in cheese manufacturing. Therefore, the present study suggests that β-CD treatment is an effective process for cholesterol removal from Manchego cheese while preserving its properties. View Full-Text
Keywords: beta cyclodextrin; ewe’s milk; cheese; Manchego; lipids; cholesterol beta cyclodextrin; ewe’s milk; cheese; Manchego; lipids; cholesterol
►▼ Show Figures 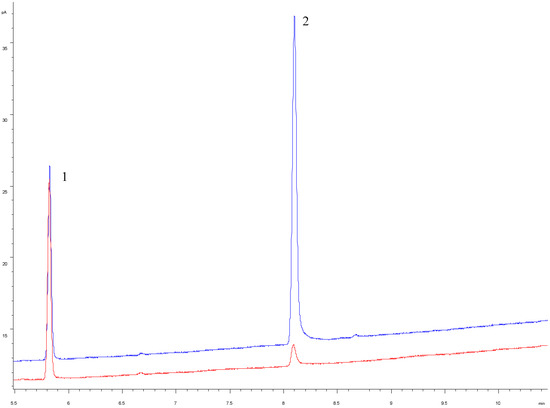