P-glycoprotein (Pgp) determines resistance to a broad spectrum of drugs used against glioblastoma multiforme (GB). Indeed, Pgp is highly expressed in GB stem cells and in the brain-blood barrier (BBB), the peculiar endothelium surrounding the brain. Inhibiting Pgp activity in the BBB and GB is still an open challenge. Here, we tested the efficacy of a small library of tetrahydroisoquinoline derivatives with an EC50 for Pgp ≤ 50 nM, in primary human BBB cells and in patient-derived GB samples, from which we isolated differentiated/adherent cells (AC, i.e., Pgp-negative/doxorubicin-sensitive cells) and stem cells (neurospheres, NS, i.e., Pgp-positive/doxorubicin-resistant cells). Three compounds used at 1 nM increased the delivery of doxorubicin, a typical substrate of Pgp, across BBB monolayer, without altering the expression and activity of other transporters. The compounds increased the drug accumulation within NS, restoring doxorubicin-induced necrosis and apoptosis, and reducing cell viability. In co-culture systems, the compounds added to the luminal face of BBB increased the delivery of doxorubicin to NS growing under BBB and rescued the drug’s cytotoxicity. Our work identified new ligands of Pgp active at low nanomolar concentrations. These compounds reduce Pgp activity in BBB and GB and improve in vitro chemotherapy efficacy in this tumor. View Full-Text
Keywords: P-glycoprotein; glioblastoma multiforme; brain-blood barrier; doxorubicin P-glycoprotein; glioblastoma multiforme; brain-blood barrier; doxorubicin
►▼ Show Figures 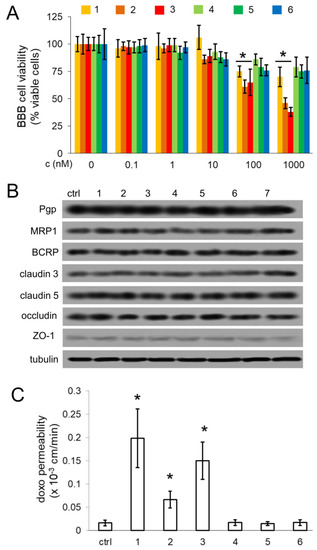