Mycotoxins, a broad class of small molecule natural products produced by molds, are toxic to humans and other vertebrates. They primarily arise in foods stored in damp conditions and outbreaks are typically reported in the developing world. For example, after a jaundice outbreak in the eastern and central provinces of Kenya sickened 317 with 125 deaths a survey of maize products in the region found more than half were contaminated with mycotoxin [1]. The specific mycotoxin ochratoxin A contaminates a wide range of crops worldwide, including coffee beans, grapes, and many grains used both for human consumption and animal feed. It is primarily a nephrotoxin, but animal studies also show that it has liver toxicity, immune suppression, teratogenic, and carcinogenic activities [2]. Ochratoxin A contaminates a variety of crops worldwide with contaminating concentrations varying widely geographically and between crops [3]. Estimates of the tolerable human intake vary widely, as do regulatory limits of maximum acceptable concentration of ochratoxin A in human and animal foodstuffs [4]. The EU limits ochratoxin A concentrations on coffee beans to 5 µg/kg (roughly corresponding to 1 nM in brewed coffee) and ochratoxin A has been reported in concentrations as high as 1200 µg/kg (roughly corresponding to 200 nM in brewed coffee) [5,6].
The ability to rapidly detect or, better still, continuously monitor for mycotoxin contamination would significantly improve the safety of our food supply. The current state of the art in mycotoxin detection, however, depends on cumbersome laboratory-based techniques, with the most common being high-performance liquid chromatography [7]. While these techniques are sensitive and accurate, they are often inaccessible or economically challenging to deploy in the developing world [8]. An inexpensive detector to measure a mycotoxin at the point of use or the point of production would make measurement accessible to the developing world and improve the ease of measurement in the developing world. In response, we have developed an electrochemical aptamer-based biosensor (E-AB sensor) for the detection of this mycotoxin.
The ochratoxin A-detecting E-AB sensors, like all sensors in this class, employ an electrode-bound, target-recognizing DNA aptamer modified with an electroactive “redox reporter” (Figure 1). Specific binding of the target alters the conformation of the aptamer, changing the efficiency of electron transfer between the reporter and the electrode. Interrogating this system using square wave voltammetry, an electrochemical measurement technique that is particularly sensitive to changes in transfer rates, we observe a change in measured current that is quantitatively related to the concentration of the target. Conveniently, such measurements are rapid, taking only seconds per measurement, and rely only on inexpensive equipment ranging from thousands of dollars for a research-grade instrument to under $100 for a simple, portable potentiostat [9]. Here we report an E-AB sensor for the detection of the mycotoxin ochratoxin A directly in flowing foodstuffs without the addition of any modifying reagents, allowing for the continuous monitoring of food processing workflows.

To create an ochratoxin A-detecting E-AB sensor we have employed an aptamer previously shown to bind this target with good specificity and affinity [11]. To date, several other groups have employed this aptamer for mycotoxin detection [11,12,13,14]. All of these previously-reported ochratoxin-detecting “aptasensors”, however, either require reagent additions or other processing steps, thus increasing the complexity and precluding continuous, real-time monitoring, or are based on fluorescence measurements, which are cumbersome and difficult to perform in foodstuffs due to autofluoresence and often significant light absorption and scattering. E-AB sensors, in contrast, are small (millimeter-scale), are supported by inexpensive, hand-held electronics [9] and provide a reagentless, single-step approach to measurement directly in highly complex media (e.g., whole blood, cell lysates, and foodstuffs) [15,16,17,18].
In order to support their use in E-AB sensors and many other sensing approaches an aptamer must undergo a conformational change upon target binding. Previously published works with this ochratoxin A aptamer have achieved this by adding to the sample solution a short DNA strand complementary to part of the aptamer sequence [11,12,13,14]. This creates an equilibrium between the partially double-stranded conformation (aptamer plus complement) and the free, properly folded aptamer. Since only the properly folded aptamer binds the target, target binding drives this equilibrium to the aptamer fold, coupling recognition with a large change in conformation [19,20]. The thermodynamics of this equilibrium (which is defined by the number of self-complementary bases in the complex and the stability of the aptamer fold) modulates the sensor’s signal gain (relative signal change upon target binding) and its affinity, with higher gain but poorer affinity being associated with stronger hybridization to the complement. Further limiting this approach, the complement is a separate piece of DNA that is “lost” during use and must be replenished by the user before the sensor can be re-used. To overcome this limitation, we instead coupled the complement to the aptamer sequence via an unstructured polythymine linker to create a single, self-complementary strand that cannot be washed away in a flowing sample stream, for example. Specifically, we created two constructs: one with the 10-base complement used in the earlier literature and a sensor with only five self-complementary bases (Figure 2A). Characterizing these constructs, however, we saw little E-AB signaling (Figure 2B). Ironically, however, we found that the parent aptamer already produces acceptable E-AB signal gain without the addition of any complementary sequence, presumably because it undergoes a binding-induced conformational change without requiring displacement of a complement. Specifically, we observe a 12% signal increase upon addition of saturating target to this sensor when it is interrogated at a square wave frequency of 240 Hz and, at “signal-off”, a 13% signal decrease when interrogated at 20 Hz (Figure 3).
The occurrence of both signal-on and signal-off behavior in the sensor provides an opportunity to employ kinetic differential measurement (KDM), a method of improving the gain and drift stability of E-AB sensors [21]. KDM does so by measuring two regimes of the electron transfer these sensors use as their signaling mechanism: a fast, “signal-on” regime where the target addition increases the electrochemical signal and a slow, “signal-off” regime where the target addition decreases the electrochemical signal (Figure 1). Taking the difference between these two measurements we improve the gain of the ochratoxin A-detecting sensor to 25%. The resultant sensor binds its target with a KD of 6.5 ± 0.6 µM when challenged in phosphate-buffered saline (Figure 3A). It is also rapid, fully responding to the addition of 800 µM target within the few seconds it takes to perform the requisite (two per time point) square wave voltammetric scans (Figure 3B).
To achieve real utility as a point-of-care or point-of-production sensor a device must be selective enough to measure its target directly in the unfiltered, unadulterated media of interest, and be highly specific for that target. To illustrate the utility of our sensor for the measurement food taint in relevant foodstuffs we, thus, challenge it in unprocessed iced coffee and find that our sensor is selective enough to work directly in this undiluted, unadulterated commercial food product (Figure 4A). Under these conditions it exhibits a signal gain of 33% and a KD of 19 ± 2 µM. To demonstrate the value of our sensor in measuring only the target of interest, we also challenged it with five other mycotoxins and find that, as expected, our sensor responds only to the specific mycotoxin ochratoxin A (Figure 4B).
The resulting E-AB sensor demonstrates a sensitive, specific, rapid single-step measurement of ochratoxin A concentrations directly within a relevant foodstuff. This enables point-of-care measurements in resource-limited areas, providing a fast, simple assurance against food taint.

Our biosensor consists of a 2 mm diameter gold disk electrode (CH Instruments, Austin, TX, USA) coated with a mixed self-assembled monolayer of thiol-modified DNA strands and 6-mercapto-1-hexanol. Electrodes were physically polished and electrochemically cleaned as previously described [22]. DNA sequences were treated with a 1000-fold molar excess of tris(2-carboxyethyl)phosphine to reduce the 5′ disulfide modification to a free thiol. Following electrochemical cleaning, electrodes were immersed in 200 nM reduced DNA in 1X PBS at room temperature for 1 h and then moved to 20 mM 6-mercapto-1-hexanol solution in 1X PBS at 4 °C overnight.

The founding sponsors had no role in the design of the study; in the collection, analyses, or interpretation of data; in the writing of the manuscript; or in the decision to publish the results. K.W.P. serves on the scientific advisory boards of several companies that are attempting to commercialize applications of E-AB sensors. 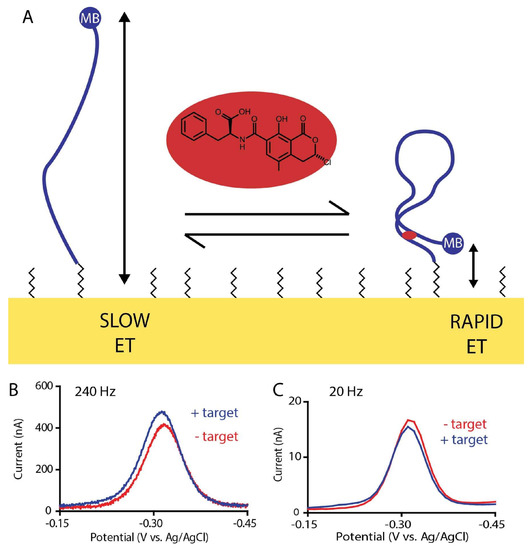 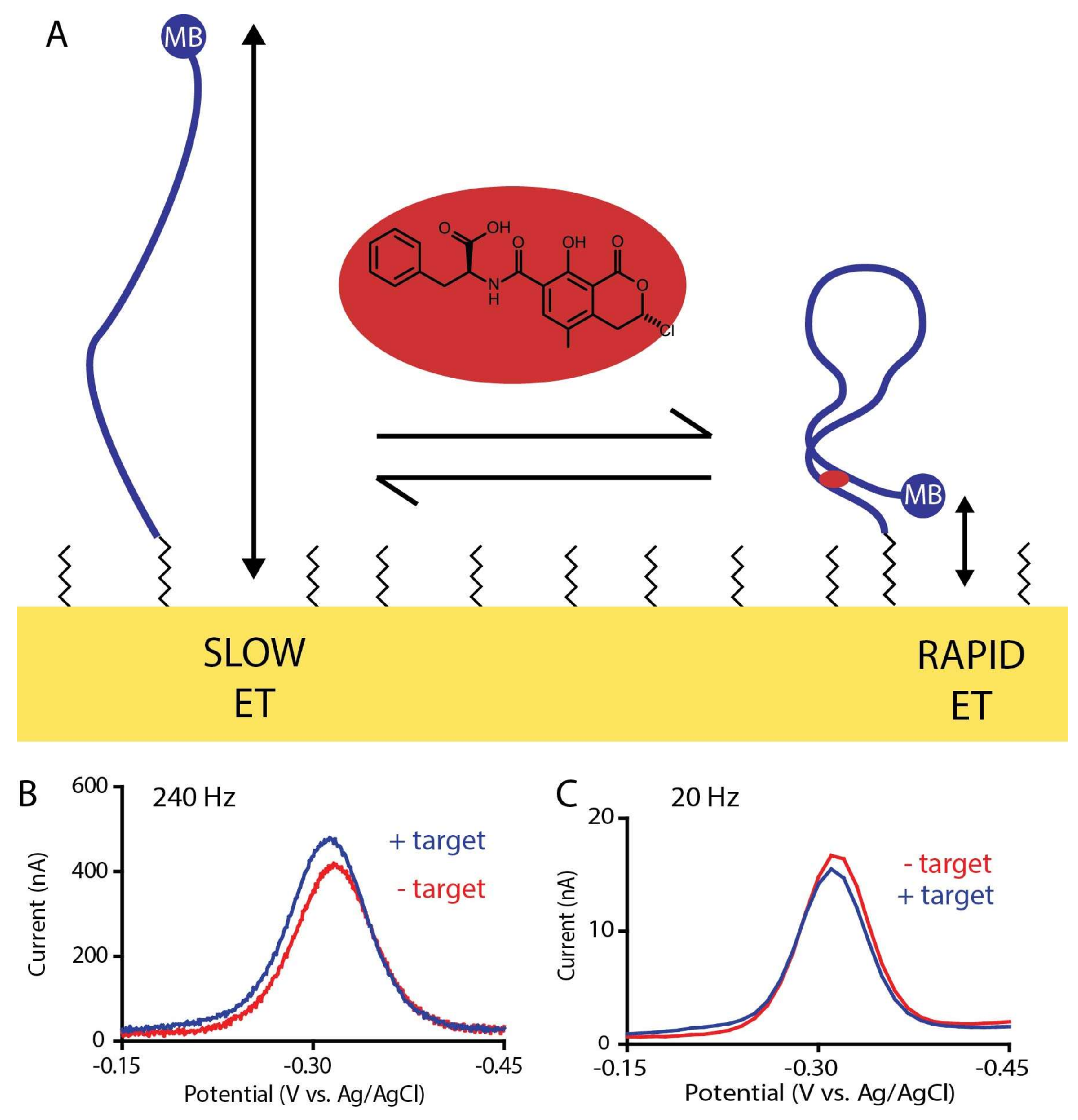