Mexican Propolis: A Source of Antioxidants and Anti-Inflammatory Compounds, and Isolation of a Novel Chalcone and ε-Caprolactone Derivative
Next Article in Special Issue

Periodontitis is a chronic inflammatory disease that contributes to the destruction of the gingiva. Porphyromonas gingivalis (P. gingivalis) can cause periodontitis via its pathogenic lipopolysaccharides (LPS). Melittin, a major component of bee venom, is known to have anti-inflammatory and antibacterial effects. However, the role of melittin in the inflammatory response has not been elucidated in periodontitis-like human keratinocytes. Therefore, we investigated the anti-inflammatory effects of melittin on a P. gingivalis LPS (PgLPS)-treated HaCaT human keratinocyte cell line. The cytotoxicity of melittin was measured using a human keratinocyte cell line, HaCaT, and a Cell Counting Kit-8. The effect of melittin on PgLPS-induced inflammation was determined with Western blot, real-time quantitative PCT, and immunofluorescence. PgLPS increased the expression of toll-like receptor (TLR) 4 and proinflammatory cytokines, such as tumor necrosis factor-α (TNF-α), interleukin (IL)-6, IL-8, and interferon-γ (IFN-γ). Moreover, PgLPS induced activation of the nuclear factor kappa-light-chain-enhancer of activated B cells (NF-κB), extracellular signal-regulated kinase (ERK), and protein kinase B/Akt. Melittin also inhibited the expression of proinflammatory cytokines by suppressing the activation of the NF-κB signaling pathway, ERK, and Akt. Melittin attenuates the PgLPS-induced inflammatory response and could therefore be applied in the treatment of periodontitis for anti-inflammatory effects.
Keywords: keratinocytes; lipopolysaccharides; melittin; periodontitis; Porphyromonas gingivalis keratinocytes; lipopolysaccharides; melittin; periodontitis; Porphyromonas gingivalis

Periodontitis is a chronic inflammatory disease caused by a multifactorial process involving interactions between oral keratinocytes and the microorganisms that colonize the mouth [1,2]. Porphyromonas gingivalis (P. gingivalis) invades periodontal tissues and releases toxic substances, such as lipopolysaccharide (LPS) , leading to periodontal inflammation and alveolar bone destruction [3]. Oral keratinocytes are on the frontline of the immune defense system against bacterial infections via toll-like receptors (TLRs), by producing a variety of pro-inflammatory cytokines and chemokines [4]. In gingival epithelial cell lines, P. gingivalis LPS (PgLPS) upregulates interleukin (IL)-6, IL-8, tumor necrosis factor (TNF)-α, and interferon (IFN)-γ gene expression and protein synthesis [5,6]. In addition, these cytokines activate neutrophils and macrophages to enhance the inflammatory response [7].
The pathogenesis of periodontitis is associated with increased levels of inflammatory cytokines and their destructive response in gingival tissues [8]. Conventional treatment for periodontal disease includes dental scaling of the subgingival tooth to eliminate the dental plaque biofilm, or surgical procedures in cases of severe loss of tooth-supporting tissue [9]. Despite these clinical interventions, periodontitis is often uncontrolled or recurrent [10,11]. Gingival tissues in patients with periodontitis show greater increases in pro-inflammatory cytokines, such as IL-1, IL-6, IL-8, and TNF-α, as well as other inflammatory mediators, compared to gingival tissues in healthy individuals [12]. Thus, numerous studies have used animal models to investigate anti-inflammatory therapies for periodontitis [13,14,15]. There are no definitive anti-inflammatory agents for this condition; however, bee venom and its major component, melittin, have recently emerged as antibacterial and anti-inflammatory agents.
Melittin is the major component (50% of dry weight) of bee venom [16]. Bee venom is a natural toxin produced by the honeybee (Apis mellifera), and has been widely used in Eastern medicine [17]. Researchers have demonstrated that bee venom and melittin have pharmacological effects on various diseases [18,19]. Melittin induces cell-cycle arrest and apoptosis in various cancer cells [20,21], and has therapeutic effects in mouse models of liver cirrhosis [22], atherosclerosis [23], and Propionibacterium acnes-induced inflammation [24]. Although bee venom has anti-inflammatory effects on PgLPS-treated human keratinocytes [25], no attempt has yet been made to demonstrate that melittin is an effective anti-inflammatory agent for P. gingivalis-induced periodontitis. Therefore, this study aimed to evaluate the effect of melittin on the expression of TLR-4 and inflammatory cytokines in PgLPS-treated human keratinocytes.

This study evaluated the effects of melittin on PgLPS-induced inflammation in human keratinocytes. PgLPS induced the expression of TLR-4 and inflammatory cytokines through the activation of the NF-κB signaling pathway, Akt, and ERK1/2. However, melittin inhibited PgLPS-induced expression of TLR-4 and inflammatory cytokines by blocking the NF-κB signaling pathway, Akt, and ERK1/2.
Gingival tissue mainly consists of gingival epithelial cells, including keratinocytes, which directly interact with P. gingivalis and its virulence factors, such as LPS, in periodontal tissues [26,27]. PgLPS is a crucial factor in the development of periodontitis, and has been reported to promote the production of IL-1, IL-6, and IL-8 [28]. Roberts et al. [29] showed that pro-inflammatory cytokines, including IL-1α, IL-1β, IL-6, IL-8, IL-12, IL-13, TNF-α, and IFN-γ, were increased in chronic periodontitis. Consistent with previous findings, the present study showed that PgLPS increased the expression of IL-6, IL-8, TNF-α, and IFN-γ in human keratinocytes. TLRs are key proteins involved in the host defense mechanism against various pathogens, including bacteria [30]. TLR-2 is activated mostly by pathogen-associated substrates from Gram-positive bacteria, while TLR-4 is activated by enterobacterial LPS activation [31], as well as PgLPS [32]. Thus, in the present study, PgLPS was used to activate TLR-4 and to promote inflammation in keratinocytes.
During the inflammatory response, IFN-γ plays an important role in the host defense mechanism against bacteria and their virulence factors by activating phagocytes and the inflammatory reaction [33]. Bacteria and their virulence factors induce the pro-inflammatory cytokines, IL-8 and TNF-α, which may play a role in the chemoattraction and maturation of inflammatory cells [34]. In addition, previous studies have demonstrated how LPS and bacteria directly contribute to the production of TNF-α, IL-1β, IL-8, and IFN-γ via TLR expression [35,36], suggesting that inhibiting TLR can help control inflammatory mediators [37,38].
Activation of TLRs usually activates the NF-κB, Akt, and MAPK ERK1/2 signaling pathways, leading to the upregulation of inflammatory gene expression, which is essential for the innate immune response to inflammation [39]. NF-κB comprises a family of inducible transcription factors that serve as important regulators in the host immune and inflammatory responses [40]. IκB is a member of the NF-κB signaling pathway, and functions as an inhibitor of NF-κB by masking the nuclear localization signals of NF-κB proteins and keeping them sequestered in an inactive state in the cytoplasm [41]. When IκB is phosphorylated by IκB kinase, NF-κB is dissociated from IκB and migrates into the nucleus [42]. Thus, reduced expression of nuclear NF-κB and cytoplasmic IκB can be an effective strategy for inhibition of inflammation.
Besides NF-κB, TLRs also activate Akt and MAPK ERK1/2, which are involved in cellular events, such as proliferation, survival, differentiation, and inflammation [43,44]. Activation of Akt and ERK1/2 increases the production of pro-inflammatory mediators, such as TNF-α and IL-1β [45,46]. The modulation of these pathways provides a potential therapeutic approach for the treatment of inflammatory disease [47]. In the present study, the expression of Akt and ERK1/2 was increased by PgLPS, but decreased by melittin.
Despite the results of our experiments showing that melittin has anti-inflammatory effects in a dose-dependent manner, there is a point that should not be overlooked. Based on our experimental results, the therapeutic window of melittin is so narrow that finding the optimal dose for clinical use or an in vivo test may be difficult. Therefore, it is necessary to be cautious when determining the concentration of melittin for clinical use or in vivo experiments. Of course, clinical use or in vivo and in vitro experiments may be different, but it is important that our study has shown that melitin has anti-inflammatory properties. This result may be enough evidence to study the therapeutic efficacy of melitin for PgLPS-induced inflammation in clinical use or in an in vivo experiment.
In summary, P. gingivalis and its major virulence factor, PgLPS, crucially contribute to inflammation through increased expression of TLR-4 and inflammatory cytokines, including IL-6, IL-8, TNF-α, and IFN-γ. It has been demonstrated that melittin has an anti-inflammatory effect by inhibiting inflammatory cytokines. Moreover, the activation of inflammatory-cytokine-related signaling pathways, including NF-κB, Akt, and ERK1/2, was decreased by melittin in PgLPS-treated human keratinocytes. These results demonstrate that melittin inhibits inflammatory cytokines by blocking their prime signaling pathways, suggesting that melittin has anti-inflammatory effects on PgLPS-stimulated human keratinocytes. In addition, our results indicate that melittin can protect keratinocytes against PgLPS-mediated injury. Therefore, melittin can be regarded as an alternative anti-inflammatory agent for the treatment of periodontitis.

HaCaT cells (CLS, Eppelheim, Germany) were cultured in Dulbecco’s modified Eagle’s medium (DMEM; GE Healthcare Life Sciences HyClone Laboratories, South Logan, UT, USA) supplemented with 10% fetal bovine serum and 1% antibiotics at 37 °C in a humidified 5% CO2 incubator. The HaCaT cells were seeded at 1.0 × 106 cells per 3 mL of complete medium in a 100-mm TC-treated cell-culture dish. The medium was changed 24 h later with serum-free medium containing the indicated concentrations of melittin (0.1, 0.5, and 1 μg/mL; Enzo Life Sciences, Farmingdale, NY, USA). After 1 h, the cells were co-treated with 100 ng/mL of PgLPS (InvivoGen, San Diego, CA, USA). After 7 h, the cells were collected for the next experiment.

The HaCaT cells were seeded at a density of 1.5 × 105 cells/well in a two-chamber slide (Eppendorf, Hamburg, Germany). After 24 h, melittin and PgLPS were applied. The treated cells were washed with phosphate-buffered saline (PBS) and fixed with 4% paraformaldehyde for 20 min at room temperature. The fixed cells were treated with 0.1% Triton X-100 in PBS for 2 min to permeabilize. Following permeabilization, the cells were blocked in PBS containing 5% BSA at room temperature for 1 h. After blocking, the cells were incubated with a diluted primary antibody overnight at 4°C, then with a secondary antibody for 4 h at room temperature. The nuclei were stained with Hoechst 33342 solution (Thermor Fisher Scientific, Waltham, MA, USA) for 20 min. The slides were mounted using a fluorescence mounting medium (Dako, Santa Clara, CA, USA). The antibodies used were anti-β-actin (A5316; Sigma, St. Louis, MO, USA), anti-NF-κB p65 (#9139, Cell Signaling Technology, Danvers, MA, USA), anti-mouse, and anti-rabbit IgG Alexa Fluor 488 and 647 (Thermo Fisher Scientific, Waltham, MA, USA).

All results were presented as mean ± standard error of the mean (SEM). Student’s t-test was used to analyze the significance of separate experiments. Differences among values were considered statistically significant when p < 0.05.

This work was carried out with the support of “Cooperative Research Program for Agriculture Science & Technology Development (Project No. PJ01221901)” Rural Development Administration, Republic of Korea. 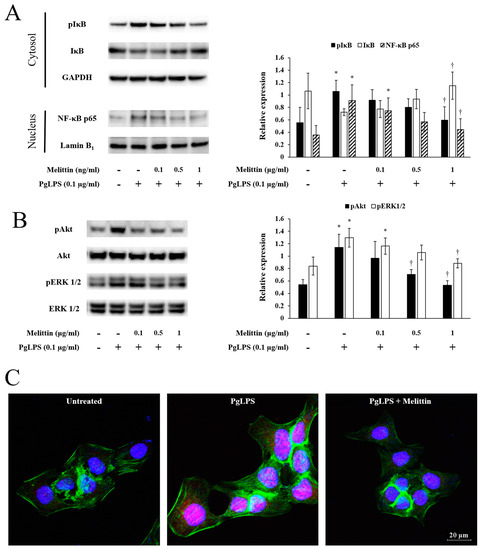 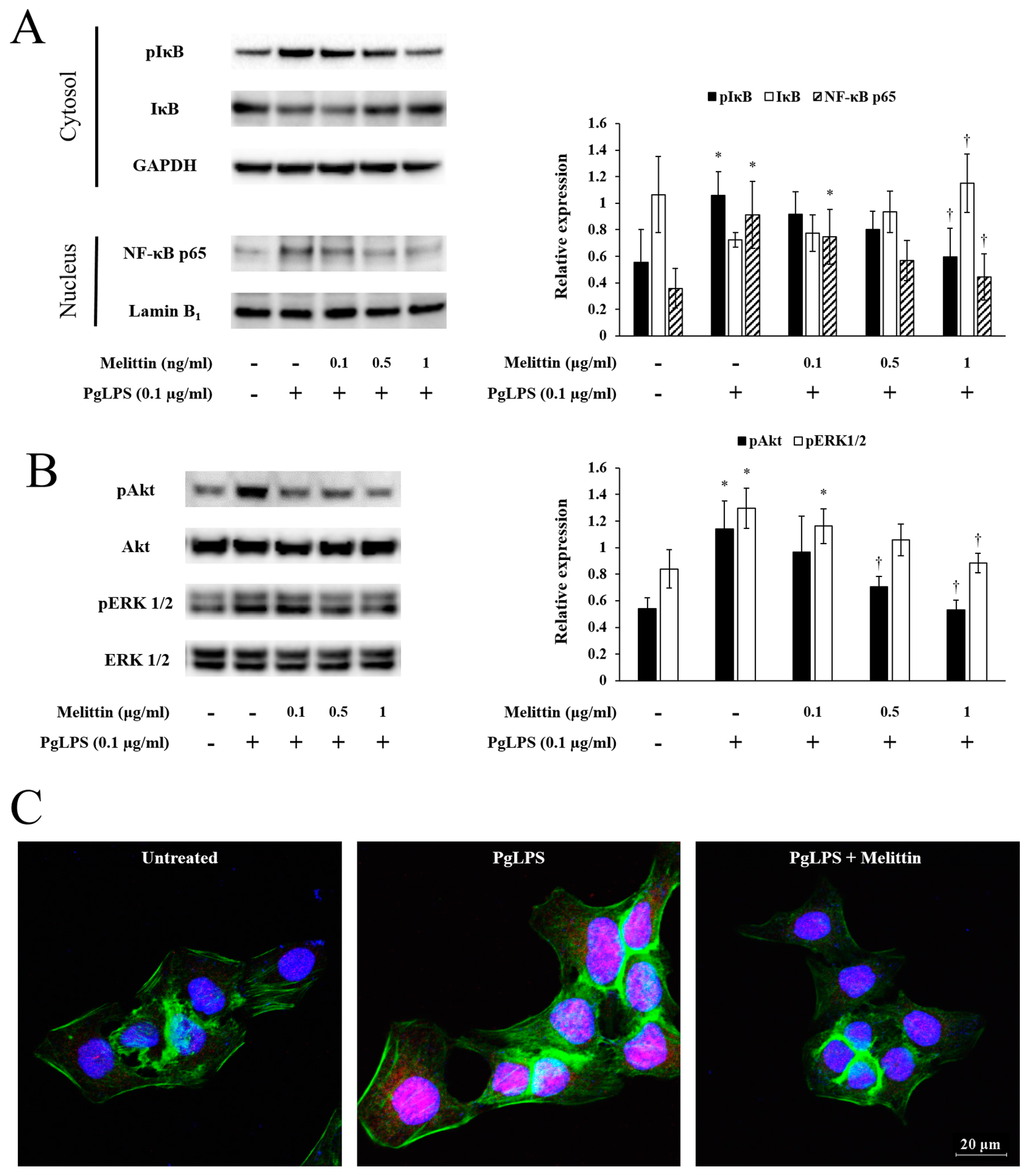