Fucoidans have been reported to exert anticancer effects with simultaneous low toxicity against healthy tissue. That correlation was observed in several cancer models, however, it has never been investigated in head and neck cancer before. To magnify the efficacy of conventional therapy, the administration of agents like fucoidan could be beneficial. The aim of this study was to evaluate the anticancer effect of Fucus vesiculosus (FV) extract alone and with co-administration of cisplatin in head and neck squamous cell carcinoma (HNSCC) in vitro. MTT assay results revealed an FV-induced inhibition of proliferation in all tested cell lines (H103, FaDu, KB). Flow cytometric cell cycle analysis showed an FV-induced, dose-dependent arrest in either S/G2 phase (H103, FaDu) or G1 arrest (KB). Furthermore, a dose-dependent gain in apoptotic fraction was observed. Western blot analysis confirmed the induction of apoptosis. A significant dose-dependent increase in reactive oxygen species (ROS) production was revealed in the H103 cell line, while FaDu cells remained unresponsive. On the contrary, an HPV-positive cell line, KB, demonstrated a dose-dependent decrease in ROS synthesis. Moreover, fucoidan enhanced the response to cisplatin (synergistic effect) in all cell lines with the HPV-positive one (KB) being the most sensitive. These results have been confirmed by flow-cytometric apoptosis analysis. In conclusion, we confirmed that fucoidan exhibits anticancer properties against HNSCC, which are manifested by the induction of apoptosis, regulation of ROS production, cell cycle arrest, and inhibition of proliferation.
Keywords: fucoidan; head and neck cancer; marine algae; complementary therapy; HNSCC fucoidan; head and neck cancer; marine algae; complementary therapy; HNSCC

Fucoidan is a sulfated fucose-rich polysaccharide derived from cell membranes of marine algae species such as Fucus spp. and Undaria spp. [1]. Its therapeutic properties have been extensively studied throughout the last decades with a strong emphasis on anticancer activity [2]. Various in vitro studies revealed its capacity to induce apoptosis [3,4] and inhibit angiogenesis [5] and the proliferation of cancer cells [6,7]. The anticancer potential of fucoidan has also been reported in vivo, where it significantly decreased tumor size and inhibited metastasis [8,9]. Moreover, fucoidan is well tolerated, even at high doses, and does not trigger the incidence of adverse effects [10]. However, the beneficial properties of fucoidans are variable throughout the whole group of fucans. They are dependent mostly on the species from which the fucoidan has been derived, the extraction method, and the structure and chemical composition of polysaccharide, especially its degree of sulfation. There are also reports suggesting that the effects of fucoidan might be cell-dependent [11].
Head and neck squamous cell carcinoma (HNSCC), as the sixth most common cancer worldwide, still poses a challenge for clinicians with its 5-year survival rate not exceeding 50% [12]. HNSCC has been reported to be associated with excessive use of alcohol, tobacco, Human Papilloma Virus (HPV), and Epstein-Barr Virus (EBV) infection [13,14]. The standard treatment of HNSCC includes surgical resection of the tumor and radio- and/or chemotherapy, a treatment which tends to not be well tolerated and often leads to severe adverse effects, which might undermine the continuation of the therapy according to the recommended protocols [15,16]. Therefore, the interest in agents, such as fucoidan, that could enhance the beneficial effects of conventional treatment or reduce the frequency of serious adverse effects has arisen.
The aim of this study was to assess the effects of crude Fucus vesiculosus-derived fucoidan on head and neck squamous cell carcinoma in vitro, including the impact on cell cycle progression, proliferation rate, apoptosis, reactive oxygen species (ROS) production, and possible alteration of effects yielded by cisplatin administration.

Incubation with increasing doses of fucoidan representing 0.5-; 1- and 2-fold of IC50 (0.5FV, 1FV, 2FV) for 24 h revealed that FV inhibits the proliferation of H103, FaDu, and KB cell lines in a dose-dependent manner irrespective of HPV infection status. Extending the incubation period to 48 h and 72 h magnifies the observed inhibition by even lower concentrations (Figure 1a,b).

Fucoidan impacts cell cycle distribution in all tested cell lines and induces cell cycle arrest in the G2/S phase in H103 and FaDu cells in a dose-dependent manner. In the case of KB cell line, we observed a slight FV-induced G1 phase arrest. What is more, incubation with fucoidan increased the apoptotic fraction in a dose-dependent manner in all HNSCC cell lines, which was represented by the increased percentage of the population of cells in the sub-G1 phase (Figure 2).

2.3. Fucoidan Induces Apoptosis of HNSCC Cells Due to the Regulation of ROS Production

Flow cytometric analysis revealed FV-induced externalization of phosphatidylserine in all HNSCC cell lines. The effect was dose-dependent, and the most sensitive cell line was H103 (Figure 3a). Additionally, induction of apoptosis was confirmed by Western blot, which revealed a down-regulation in the full-length forms of PARP and CASP3 in H103 and FaDu following 24 h treatment with FV. The effects observed in KB cells differ regarding CASP3, in this case, fucoidan treatment correlated with up-regulated expression (Figure 3b). Additionally, in all tested cell lines, the down-regulation of BECN1 (an anti-apoptotic marker) was observed, which indicates direct caspase-dependent apoptosis is occurring. Furthermore, 24 h treatment with fucoidan increased ROS production in H103 cells. In contrast, an opposite effect was observed in KB cells, where incubation with fucoidan reduced ROS production. Both effects were dose-dependent. However, FaDu cells remained unresponsive to fucoidan, as ROS production was not altered after treatment, which suggests that cell death was not related to oxidative stress but rather to direct activation of caspase-dependent apoptosis (Figure 4).

In order to assess a possible alteration of response to cisplatin induced by simultaneous co-administration of fucoidan, an MTT assay using cisplatin at concentration ranges between 0.667 µM to 53.36 µM was performed, and IC50 doses were calculated (Figure 5a,b). To establish an optimal time point for further analysis, cells were treated with the respective IC50 concentration of cisplatin for 2, 4, 6, 8, 16 and 24 h. Obtained MTT results proved that an 8 h incubation with cisplatin in the case of H103 cells, and 16 h in both FaDu and KB cells, yielded no toxicity. Thus, cells were treated with the respective dose of cisplatin alone or in combination with fucoidan (IC50 doses) for 8 h (H103) or 16 h (FaDu, KB). We found that simultaneous administration of cisplatin and fucoidan magnifies toxicity and lowers cell viability in all HNSCC cell lines (Figure 5c). These data were confirmed by flow cytometric analysis of apoptosis, although significant changes were observed only in H103 cells (Figure 5d). To assess in detail the character of fucoidan and cisplatin activity, we conducted an analysis of drug interactions. This analysis revealed a synergy between FV and CIS in all tested cell lines in both experiments, with the exception of FaDu cells. In this case, analysis of apoptosis in cells receiving combined treatment demonstrated an additive effect (Table 1).

To assess the effect of fucoidan on cell cycle distribution, cells were seeded into 6-well plates. The next day, cells were treated with concentrations representing 0.5 (0.5FV), 1 (1FV), and 2-fold IC50 (2FV) doses of FV for 24 h. After that, cells were harvested, washed in PBS, fixed with cold 70% ethanol, and incubated at −20 °C overnight. Samples were stained with a PBS solution containing 20 µL 500 µg/mL RNase (Cayman Chemical, Ann Arbor, MI, USA) and 40 µL of 250 µg/mL propidium iodide (PI) (Cayman Chemical, MI, USA) in a total volume of 200 µL at 37 °C for 30 min. Data were acquired using BD Accuri C6 Plus (BD Biosciences, San Jose, CA, USA), and results were analyzed with FlowJo software (FlowJo, LLC, Ashland, OR, USA).

In order to assess the induction of apoptosis indicated by phosphatidylserine externalization following treatment with fucoidan, cisplatin or their combination, cells were stained with Annexin V Apoptosis Detection Kit I (BD Biosciences, San Jose, CA, USA) according to the manufacturer’s protocol. Briefly, cells were harvested, washed, resuspended in 100 µL of Annexin Binding Buffer, and incubated with 5 µL of Annexin V APC-conjugated antibody and 5 µL of PI for 15 min in the dark at room temperature. Next, cells were centrifuged and resuspended in 200 µL PBS. Data were acquired by means of BD Accuri C6 Plus (BD Biosciences, San Jose, CA, USA), and results were analyzed with FlowJo software (FlowJo, LLC, Ashland, OR, USA).

In order to assess the level of intracellular reactive oxygen species production, the cells were treated with 0.5FV, 1FV and 2FV for 24 h, and collected and washed twice in PBS. Pellets were resuspended in 1 mL of PBS and incubated with 1 µL of 2,7-dichlorofluorescein diacetate (DCFH-DA) (Sigma Aldrich, MO, USA) at 37 °C for 45 min in the dark. Next, cells were centrifuged and resuspended in 200 µL PBS. DCFH-DA fluorescence was measured by BD Accuri C6 Plus (BD Biosciences, San Jose, CA, USA) and data were analyzed with FlowJo software (FlowJo, LLC, Ashland, OR, USA).

The modified probability sum test (according to Schrader et al. [50] and Stoehr et al. [51]) was applied to assess the mode of combinatory effect, according to the formula:
q = P[A + B]/(P[A] + P[B] − P[A] × P[B])
where P[A] represents the efficacy of drug A and P[B] the efficacy of drug B, while P[A + B] depicts the efficacy of a combination of both drugs at the same doses. Assessed value/expected value (sum of probability of independent events) ratios were defined: q < 0.85 as antagonism, while q = 1 ± 0.15 indicates additivity and q > 1.15 synergism.

In conclusion, for the first time, we proved that crude Fucus vesiculosus fucoidan exerts anticancer effects towards HNSCC in vitro, which are manifested by the inhibition of proliferation, cell cycle arrest, induction of apoptosis, and regulation of reactive oxygen species synthesis. Also, we observed synergy between fucoidan and cisplatin in the tested head and neck cancer cell lines. Therefore, fucoidan, as a non-toxic, well-tolerated compound poses a good candidate for a complementary agent in chemotherapy. However, additional research is crucial in order to investigate the mechanistic background behind its activity. 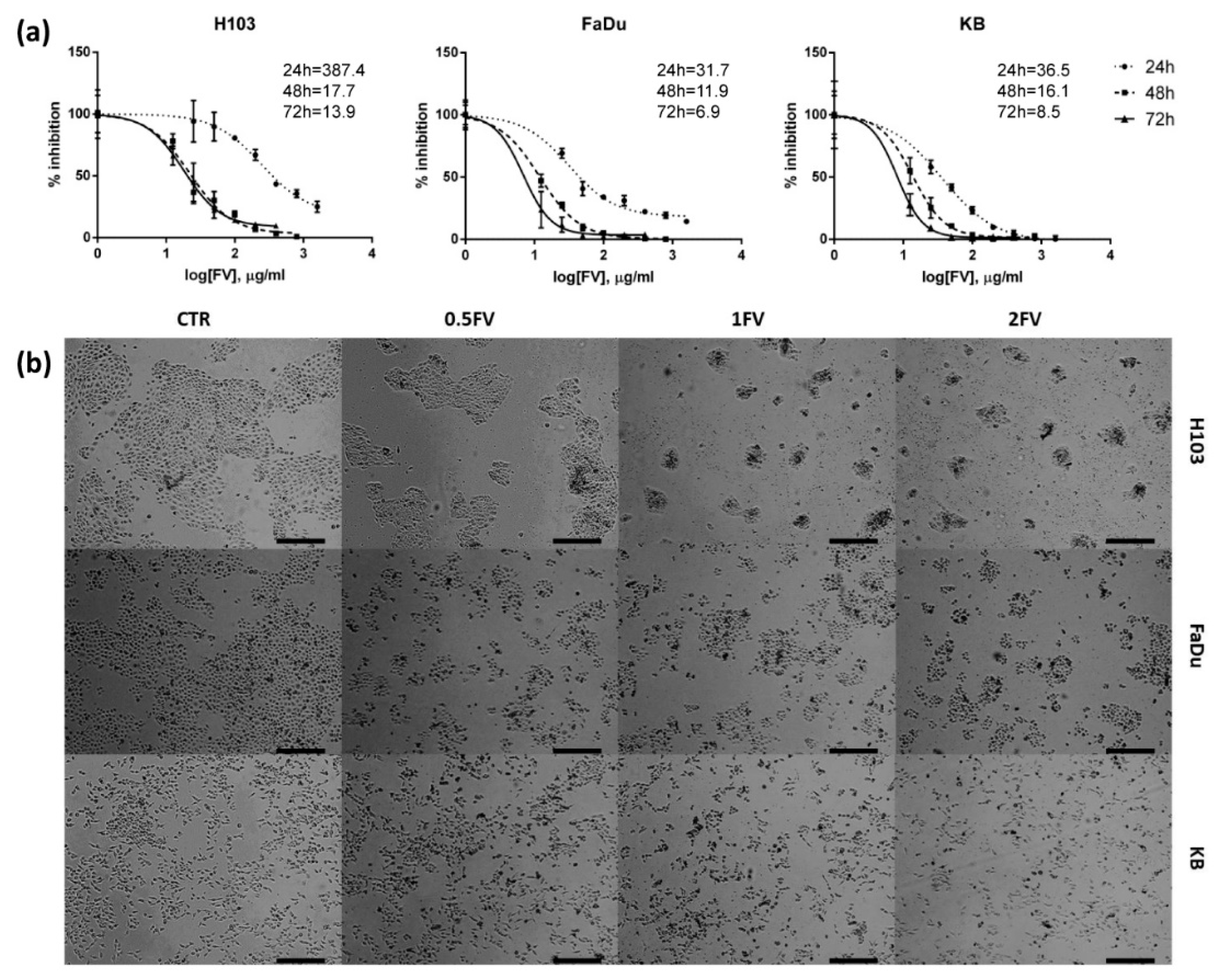 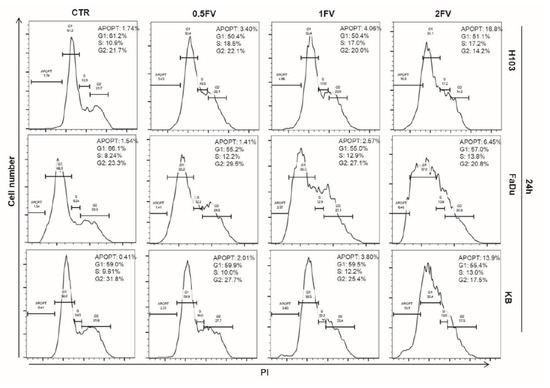 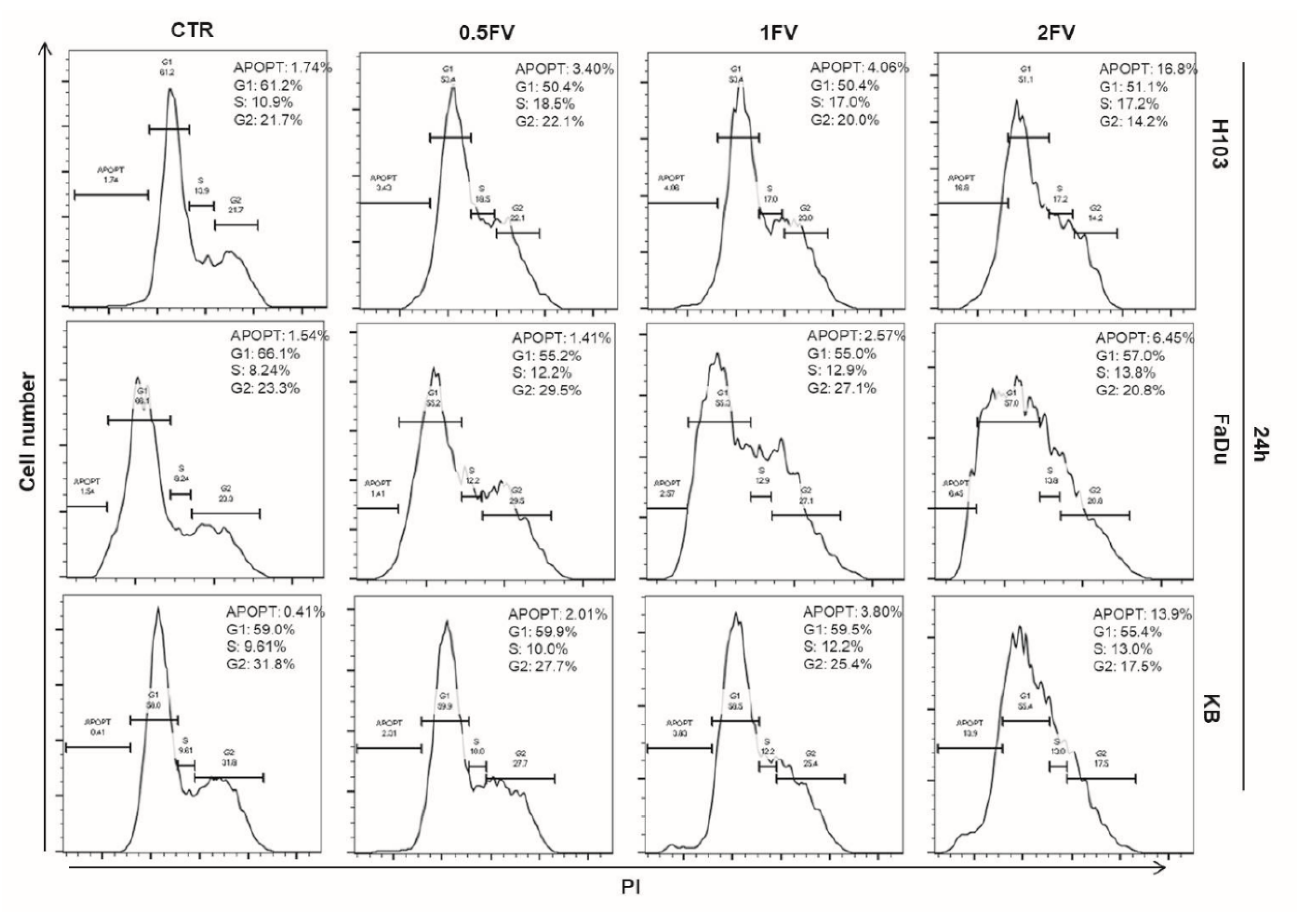 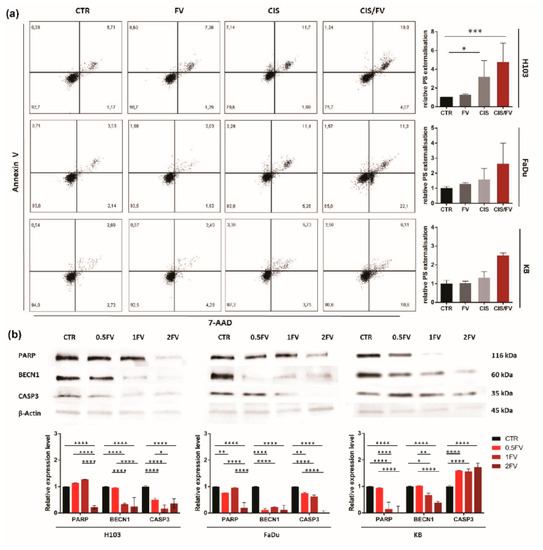 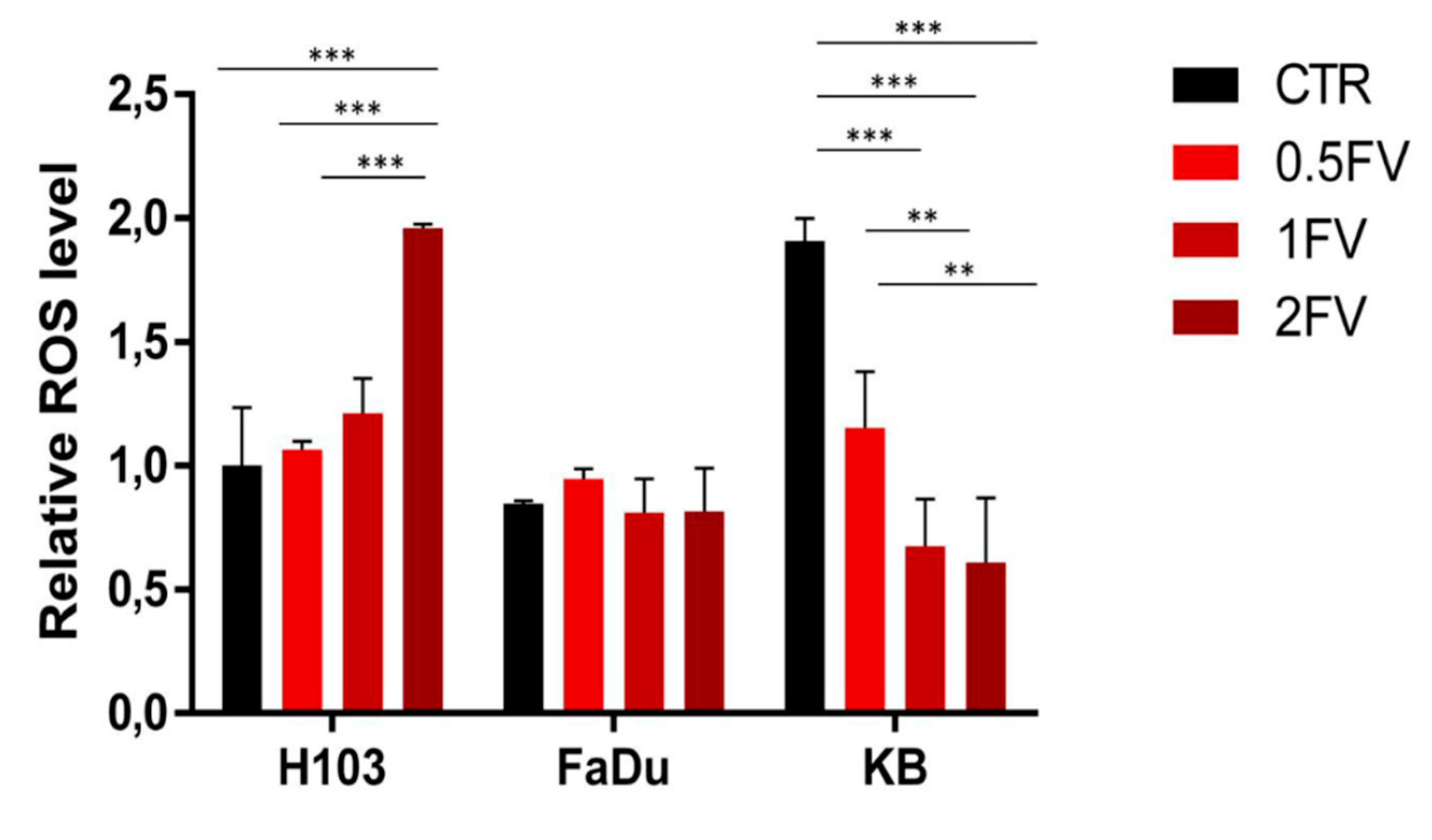 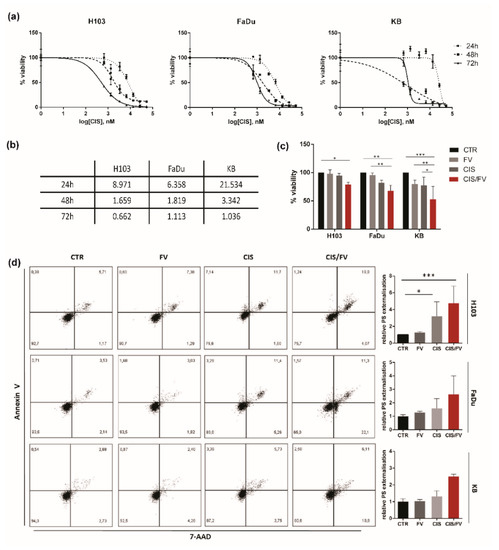 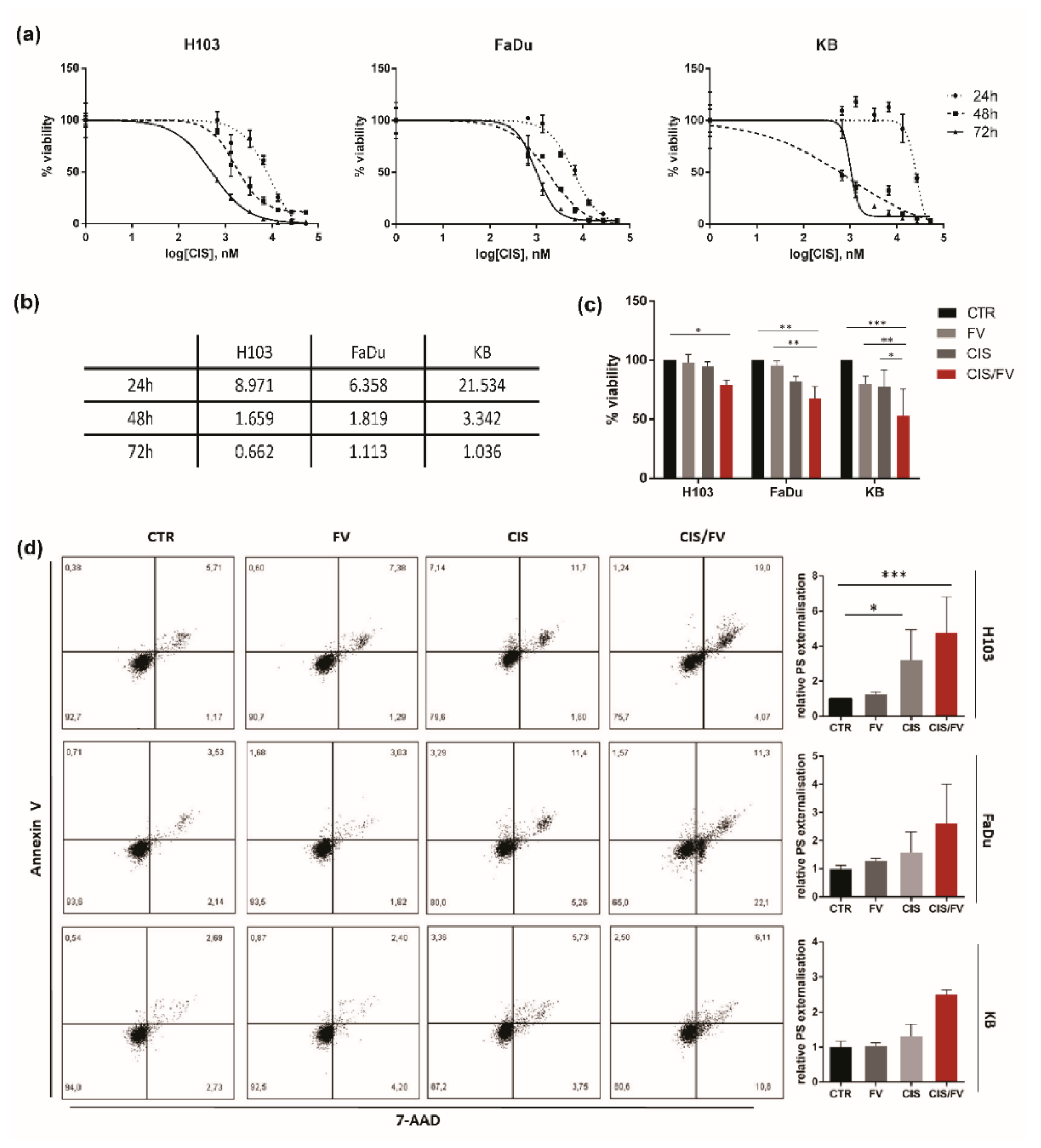