:
Mechanochemical ball milling catalytic transfer hydrogenation (CTH) of aromatic nitro compounds using readily available and cheap ammonium formate as the hydrogen source is demonstrated as a simple, facile and clean approach for the synthesis of substituted anilines and selected pharmaceutically relevant compounds. The scope of mechanochemical CTH is broad, as the reduction conditions tolerate various functionalities, for example nitro, amino, hydroxy, carbonyl, amide, urea, amino acid and heterocyclic. The presented methodology was also successfully integrated with other types of chemical reactions previously carried out mechanochemically, such as amide bond formation by coupling amines with acyl chlorides or anhydrides and click-type coupling reactions between amines and iso(thio)cyanates. In this way, we showed that active pharmaceutical ingredients Procainamide and Paracetamol could be synthesized from the respective nitro-precursors on milligram and gram scale in excellent isolated yields.
Keywords:
mechanochemistry; catalytic transfer hydrogenation; aromatic nitro derivatives; ammonium formate; aging; ball milling; synthesis 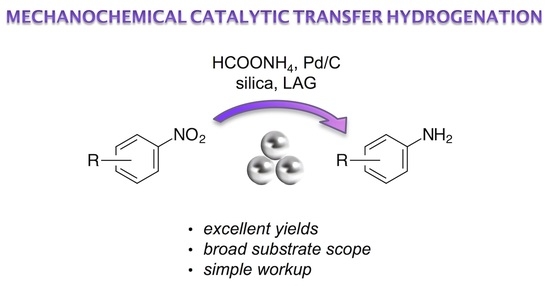 Catalytic hydrogenation is one of the most significant functional group transformation reactions in organic synthesis and numerous procedures and reagents have been developed for that purpose [1,2]. As such, the hydrogenation reaction plays one of the key roles in many industrially important processes, for example hydrogenation of carbon monoxide to methanol or in food industry for the conversion of unsaturated vegetable oils into saturated triglycerides [3]. From a variety of available protocols, we have selected to use of formic acid salts as the source of hydrogen as a particularly appealing methodology [4,5,6]. In the presence of a catalytic amount of palladium on carbon, ammonium formate undergoes decomposition to carbon dioxide, ammonia and hydrogen [7]. This type of hydrogenation reaction is typically performed in a solvent by stirring a heterogenous mixture until the reaction is complete. Following the emergence of new greener methods for chemical synthesis, ammonium formate promoted hydrogenation has been attempted under microwave irradiation [8,9] and in ionic liquids [10]. Mechanochemistry by ball milling has attracted much attention in the chemistry community as a promising methodology that meets many of the green chemistry criteria [11,12,13,14,15]. Its effectiveness is reflected in often quantitative reaction yields and short reaction times, high product purity, low energy consumption and cost. Simple sample preparation that avoids bulk solvent and bench-top operation mode make it suitable for research and educational laboratories [16], whereas the application of twin extrusion allows large scale solid-state synthesis of compounds [17,18,19]. Novel methodological concepts, such as resonant acoustic mixing, enable an efficient solid-state synthesis of pharmaceutical cocrystals [20] while technical solutions like multiposition jars/adapters and ball milling compatible LED reactors and glass jars, assist in broadening the utility of mechanochemistry in high-throughput parallel synthesis [21] and solid-state visible light photocatalysis [22].
Therefore, one can envisage that hydrogenation reaction might also be transferred into the arena of mechanochemically-assisted organic synthesis [23,24,25,26,27]. Significant progress has been made over the last several years in this respect, with mechanochemistry securing its place in organic chemistry areas like organocatalysis [28,29,30] and metal-catalysis [31], C–H functionalization [32,33], multicomponent reactions [34] and so forth. Considering the expansion of literature on utilising solid-state milling as a synthetic tool, the mechanochemical hydrogenation still remains one of the underexplored areas with only a few papers published (Scheme 1).
For example, Delogu reported hydrogenation of carbon monoxide over solid (Co50Fe50)0.2(TiO2)99.8 and Ni40(ZrO2)60 catalysts under ball milling conditions [35], while Mack et al. developed a mechanochemical approach for the hydride reduction of esters to alcohols using NaBH4/LiCl system [36]. An example of catalytic hydrogenation reaction using Pd/C as the catalyst under a pressure of hydrogen gas (unpublished results) was provided in a review by Kaupp [37], who described the gas-solid synthesis of norbornane-endo-2,3-dicarboxylic anhydride from the norbornene derivative in 200 g batches. The product was easily sublimed off from the catalyst but milling was not applicable if volatile liquids had to be constantly pumped off or if the products had become liquid or sticky. A few literature sources report on the mechanochemical reductive dehalogenation [38,39,40], for example catalytic hydrodechlorination of aromatic chlorinated compounds such as hexachlorobenzene by using calcium hydride, sodium hypophosphite or borohydride as the hydride donors in a ball mill [41]. Sawama reported on an interesting example of hydro- and deuterogenation of unsaturated substrates by H2O or D2O as H2 or D2 sources in a planetary ball mill. Chromium and nickel, as structural components of SUS304 stainless steel jars and balls used in experiments, reduce H2O/D2O generating H2/D2 in situ under rather harsh milling conditions [42,43]. In their latest report, in-situ generation of hydrogen gas from alkanes or even diethyl ether was demonstrated [44]. Hapiot et al. described gold nanoparticles-catalysed (AuNPs) reduction of several o-, m- and p-halogenated nitrobenzene derivatives by ball milling. With sodium borohydride as the reducing agent, cyclodextrin-stabilised AuNPs were employed as catalysts to achieve nitro-group reduction [45]. Most recently, Moores and Li employed milling for the catalytic transfer hydrogenation (CTH) of ketones and aldehydes to alcohols using polymethylhydrosiloxane with either tetrabutylammonium fluoride/silica or potassium fluoride/18-crown-6 mixtures as additives [46]. The authors demonstrated a successful reduction of the carbonyl group in the presence of potentially reactive functionalities such as alkenes or alkynes, carboxylic, cyano and nitro groups.
The reduction of aromatic nitro-group is a well-documented organic transformation [47,48,49,50,51,52,53,54]. Traditionally, the reaction is carried out in a suitable solvent under an atmosphere of hydrogen in the presence of a catalyst. Hydrogen gas can also be generated by the action of an acid (HCl or acetic acid) on metals such as zinc, iron or indium where electron transfer produces reduced radical species or indirectly from hydrogen transfer reagents (donors), for example formate salts or hydrazine. Except for the AuNP-catalysed reduction of halogenated nitrobenzenes using NaBH4 [45], it seems that mechanochemical approach has otherwise not been employed for the conversion of nitroaromatics to substituted anilines.
Here, we opted for easy-to-handle crystalline ammonium formate as a cheap, water soluble and low hazard hydrogen source which, in combination with Pd-C catalyst and silica as the only additive, allows for an environmentally-friendly mechanochemical catalytic transfer hydrogenation (CTH) of aromatic compounds containing the nitro functionality (Scheme 1). This method also avoids working with pressurized hydrogen gas which requires a special experimental setup and enables simple and easy-to-implement procedure in research laboratories but also in organic chemistry education as a model mechanochemical reduction reaction. Still, precautions are advised since aromatic nitro derivatives are toxic and potentially explosive.
In this paper, we demonstrate how simple milling of the reactant mixture in a ball mill provides an environment for efficient synthesis of a series of aromatic amines by CTH of nitro derivatives, particularly targeting biologically active compounds such as procainamide and paracetamol. Selected reactions have also been carried out on 1.0 g scale, whose efficiency matched the milligram scale ones.

In a typical experiment, a mixture of nitroarene (1.0 mmol), ammonium formate (3.3 mmol, 208 mg, 1.1 equivalent based on the donor:substrate = 3:1 stoichiometry required for a quantitative reduction of the NO2 to NH2 functional group), 10 wt% palladium on carbon (21.0 mg, 2 mol%) and silica (175 mg) was loaded into a 10 mL stainless steel grinding jar along with one 12 mm diameter grinding ball. The mixture was ground in the presence of methanol as the grinding liquid (η = 0.25 μL mg−1) for 90 min, unless otherwise stated (see Table 1). The crude product was scraped off the walls of the jar, left in air overnight to allow excess ammonium formate to completely decompose and suspended in 10 mL of methanol. The suspension was filtered over a Büchner funnel and the filtrate was evaporated to afford amino derivatives. If necessary, the products were purified by column chromatography. Experimental details, spectroscopic and electron microscopy characterization data can be found in the Supplementary Materials.

We have successfully demonstrated that an efficient catalytic transfer hydrogenation of aromatic nitro compounds using readily available ammonium formate as hydrogen donor and palladium on carbon as the catalyst can be accomplished under solid-state mechanochemical milling conditions. The synthetic protocol, which is very simple and straightforward, tolerates a variety of functional groups, including amino, hydroxyl, carboxyl, carbamate, amide, imide, urea, acetyl, α,β-unsaturated carbonyl and fused heterocycles such as pyridine. The presence of halogen or O-benzyl substituents results in diminished yields, while polyaromatic substrates are not compatible. The mechanochemical approach has also been applied for the two-step synthesis of pharmaceutically important procainamide and paracetamol drugs, both on milligram and gram scale. We have also shown that the mechanochemical CTH can be coupled with the previously developed concept of click-mechanochemistry, to enable a multi-step synthesis of (thio)urea hybrid molecules as potential scaffolds in anion sensor and organocatalyst design.

This research was funded by the Croatian Science Foundation grant number 9310.

The authors declare no conflict of interest. The funding sponsors had no role in the design of the study; in the collection, analyses, or interpretation of data; in the writing of the manuscript and in the decision to publish the results. 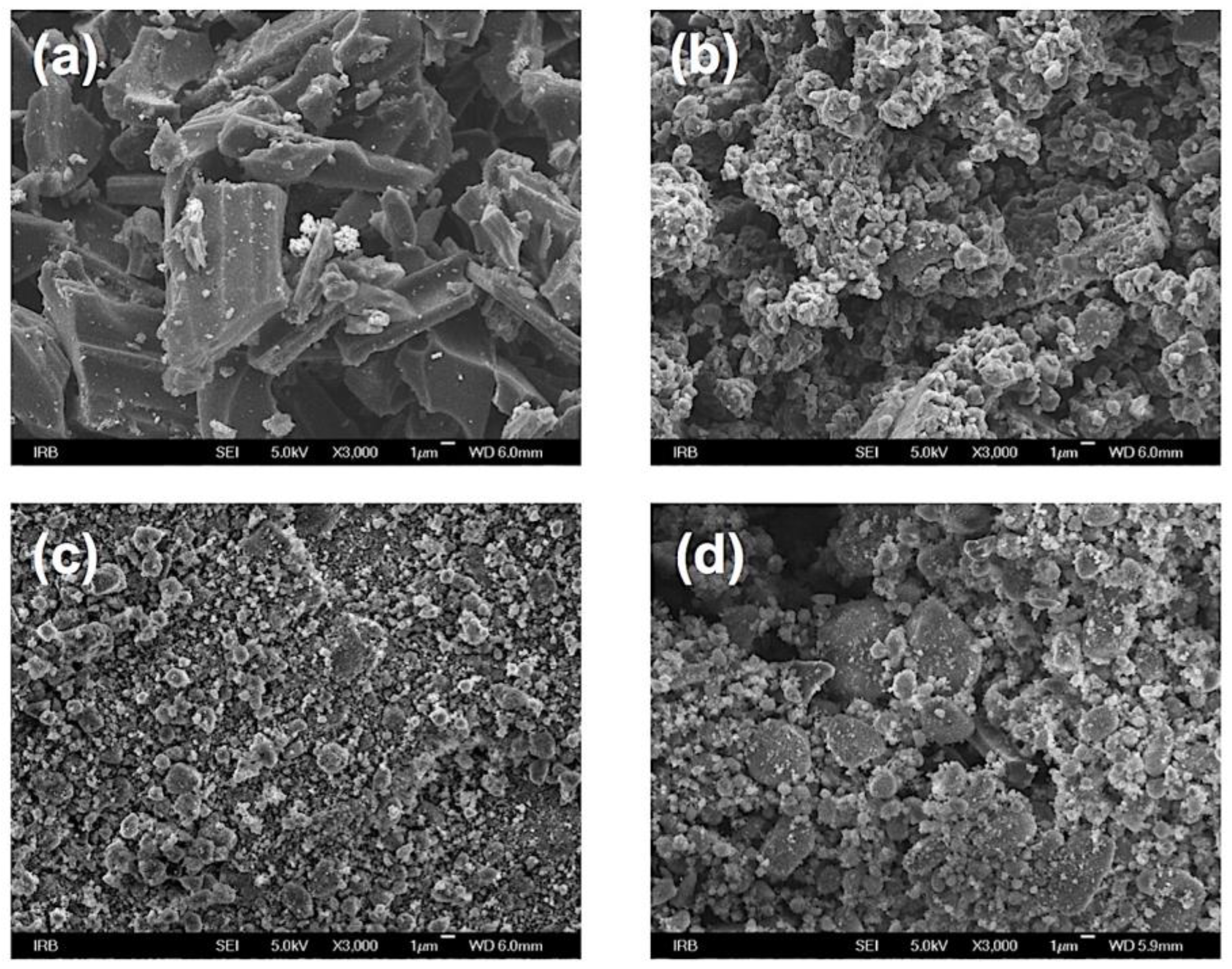 Table 1. The scope of mechanochemical catalytic transfer hydrogenation 1.
Table 1. The scope of mechanochemical catalytic transfer hydrogenation 1.
1 Reaction conditions: 1.0 mmol substrate, 3.3 mmol HCOONH4, 2 mol% of Pd/C and 175 mg of silica were ground in a 10 mL jar using one 12 mm stainless steel ball at 30 Hz for 90 min. Methanol was used for LAG (η = 0.25 μL mg−1). 2 For 2b isomers, yields in the parentheses refer to CTH of the respective dinitrobenzenes on 0.75 mmol scale. 3 For compounds 2l-Phe, 2l-Val, 2o and 2w, 2.2 eq of HCOONH4 and 5 mol% of Pd/C were required, while for 2j, p-2p and o-2p, blue colour indicates the position of the reduced nitro group. Other details can be found in the Supplementary Materials.
© 2018 by the authors. Licensee MDPI, Basel, Switzerland. This article is an open access article distributed under the terms and conditions of the Creative Commons Attribution (CC BY) license (http://creativecommons.org/licenses/by/4.0/).