Synthesis and Characterization of a Bioartificial Polymeric System with Potential Antibacterial Activity: Chitosan-Polyvinyl Alcohol-Ampicillin
Next Article in Special Issue

New heterometallic aluminium-alkali metal compounds have been prepared using Schiff bases with electron withdrawing substituents as ligands. The synthesis of these new species was achieved via the reaction of AlMe3 with the freshly prepared alkali-metallated ligand. The derivatives formed were characterized by NMR in solution and by single crystal X-ray diffraction in the solid state. Aluminate derivatives with lithium and sodium were prepared and a clear influence of the alkali metal in the final outcome is observed. The presence of a Na···F interaction in the solid state has a stabilization effect and the species [NaAlMe3L]2 can de isolated for the first time, which was not possible when using Schiff bases without electron withdrawing substituents as ligands. View Full-Text
Keywords: aluminium; alkali metals; Schiff bases; heterometallic compounds aluminium; alkali metals; Schiff bases; heterometallic compounds
►▼ Show Figures 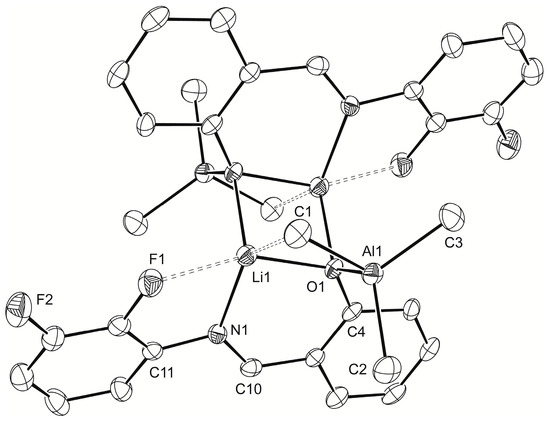