A Metabolomic and HPLC-MS/MS Analysis of the Foliar Phenolics, Flavonoids and Coumarins of the Fraxinus Species Resistant and Susceptible to Emerald Ash Borer

Domenic A. Lombardo
1 and 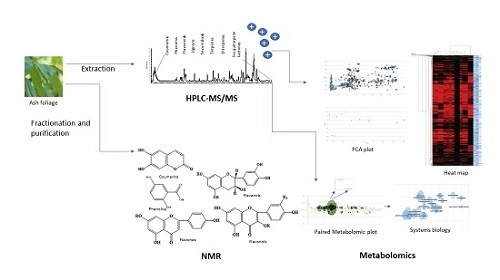 
Qazi, Sohail S., Domenic A. Lombardo, and Mamdouh M. Abou-Zaid 2018. "A Metabolomic and HPLC-MS/MS Analysis of the Foliar Phenolics, Flavonoids and Coumarins of the Fraxinus Species Resistant and Susceptible to Emerald Ash Borer" Molecules 23, no. 11: 2734. https://doi.org/10.3390/molecules23112734