Bioprocessing of Functional Ingredients from Flaxseed
Previous Article in Journal

An azaphenothiazine derivative, 6-chloroethylureidoethyldiquino[3,2-b;2′,3′-e][1,4]thiazine (DQT), has recently been shown to exhibit immunosuppressive activities in mouse models. It also inhibited the expression of CXCL10 at the protein level, at non-toxic concentrations, in the culture of KERTr cells treated with double-stranded RNA, poly(I:C). In this report, we demonstrated that DQT inhibits the transcription of the CXCL10 gene. Although CXCL10 is an IFNγ-inducible protein, we found that the CXCL10 protein was induced without the detectable release of IFNγ or IκB degradation. Hence, we concluded that IFNγ or NFκB was not involved in the regulation of the CXCL10 gene in KERTr cells transfected with poly(I:C), nor in the inhibitory activity of DQT. On the other hand, we found that IFNβ was induced under the same conditions and that its expression was inhibited by DQT. Kinetic analysis showed that an increase in IFNβ concentrations occurred 4–8 h after poly(I:C) treatment, while the concentration of CXCL10 was undetectable at that time and started to increase later, when IFNβ reached high levels. Therefore, DQT may be regarded as a new promising inhibitor of IFNβ expression and IFNβ-dependent downstream genes and proteins, e.g., CXCL10 chemokine, which is implicated in the pathogenesis of autoimmune diseases. View Full-Text
Keywords: azaphenothiazine; anti-inflammatory activity; CXCL10; KERTr cells; keratinocytes; IFNβ; TLR3 azaphenothiazine; anti-inflammatory activity; CXCL10; KERTr cells; keratinocytes; IFNβ; TLR3
►▼ Show Figures 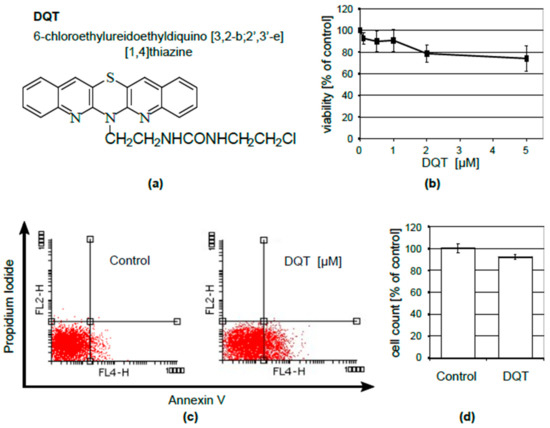