Breast cancer is a common cancer and is the leading cause of cancer-related deaths among women worldwide. Studies have shown that breast cancer is a heterogeneous tumor with varying response to treatments. Radiation therapy is particularly effective in the treatment of breast cancer, but it carries the risk of normal cell damage and radioresistance of tumor cells. The development of radioresistance leads to cancer recurrence of a more aggressive phenotype in patients [1,2,3,4].
Chemopreventive agents act as cell cycle inhibitors. As a result of activation of check points, cellular stress can lead to cell cycle inhibition. G1/S phase control, prevents replication of damaged DNA, while G2/M phase control prevents segregation of damaged chromosomes into daughter cells during mitosis. Many chemopreventive factors inhibit the growth and proliferation of tumor cells by modulating the expression and/or activation of cell cycle regulatory proteins [5,6,7].
Apoptosis is a process of programmed cell death that plays a major role in the preservation of tissue homeostasis and the elimination of neoplastic cells. Chemopreventive agents can affect many effector and regulatory elements of the apoptosis process [8,9,10]. Numerous studies have shown that chemopreventive agents induce apoptosis in various types of cancer cells by affecting multiple proteins involved in programmed cell death [11,12].
The need for new compounds with effective antitumor action and high cancer cell selectivity, as well as low normal cell toxicity, highlights the need for testing a wide variety of chemically and structurally related compounds. Recently, interest in natural compounds has increased significantly as some compounds show cytotoxic, antiproliferative and proapoptotic effects essential for inhibiting cancer cell growth.
Recent studies indicate that caffeic acid (CA), and its phenethyl ester (CAPE) are compounds with potent chemopreventive effects, inter alia by cell cycle inhibition and proapoptotic action [13,14,15,16]. CAPE is a polyphenol which is a component of honeybee propolis. CAPE is known to have antiviral, anti-inflammatory, anti-cancer and antioxidant effects [17,18,19]. CAPE has shown its anticancer effects on different cancer cell lines; however, it has also exhibited differential cytotoxic activity against normal cells in the presence of cancer cells [20,21,22,23,24].
Some researchers have noted the significant role of CAPE in apoptosis and cell cycle arrest [25,26,27]. It has also been shown that CAPE can reduce expression of the mdr-1 gene and thereby increases the sensitivity of cancer cells to chemotherapy. A decrease in vascular endothelial growth factor (VEGF) concentrations inhibits angiogenesis and cancer growth [28,29,30]. Inhibition of the nuclear factor κB (NF-κB) cell signalling pathway by CAPE is also known to reflect in resistance to radiotherapy [31,32].
CA has been shown to be a factor displaying a variety of potential pharmacological effects in in vitro research as well as animal models, and it’s reported that CA has an inhibitory effect on cancer cell proliferation [33,34,35]. Nevertheless, precise reports concerning cytotoxicity and apoptotic activity of propolis components (CA and CAPE) in human cancer cells, remain inconsistent and leave the field open for further exploration. The in vitro study now reported was conducted to investigate and compare the cytotoxic effects of two phenolic substances of propolis: CA and CAPE on the viability, apoptosis, and cell cycle arrest of the MDA-MB-231 breast cancer cell line.

The growth inhibiting effects on a MDA-MB-231 cell line treated with CA and CAPE was assayed by MTT cell viability. Accordingly, data were normalized and expressed as % of viability over controls. Using CA for treatment of MDA-MB-231, cell viability decreased as the dose increased, dropping from 97.9% for a dose of 10 µM, to 95.4% for 25 µM and 91.4% at 50 µM and a value of 80.9% with a dose of CA 100 µM, after 24 h of incubation (Figure 1a,d). Simultaneously, comparing CAPE cytotoxic activity to CA for the MDA-MB-231 cell line (Figure 1a,c), cell viability values for a dose of 10 µM were similar to CA (97.3%), which indicates low cytotoxic effects during the experiment. However, the value was 50.3% at 25 µM, 11.9% for 50 µM and 11.6% for 100 µM.
After 48 h of incubation (Figure 1b,d), the CA cell viability had a dose-dependent effect with the following values: 99.0% for a dose of 10 µM, 93.6% for 25 µM, 89,2% for 50 µM, and finally 78.0% for 100 µM. However, if we compare the viability effect of CAPE vs. CA after 48 h of incubation (Figure 1b,c) the values were statistically different, starting with 71.2% for 10 µM of CAPE, to 27.2% for 25 µM, 9.6% for 50 µM and reaching 5.6% for 100 µM, the strongest cytotoxic effect. Therefore, CAPE demonstrated a high dose-dependent effect. Comparing CA vs CAPE, the cell viability values were statistically lower for CAPE (meaning CAPE has a higher cytotoxic effect than CA). Our results showed a dependent trend of dosages for both substances with CAPE being time dependent. It is worth noting that CAPE reached lower viability for higher doses earlier, meaning CAPE’s cytotoxic activity respectively occurs earlier.
During the experiment, the half maximal inhibitory concentration (IC50) was calculated, for both substances for the MDA-MB-231 breast cancer line. The results are shown in Table 1. A 50%-mortality of breast cancer cells of MDA-MB-231 were obtained with a CAPE dose of 27.84 µM for 24 h of incubation, and for 48 h–15.84 µM. For CA, the values reached more than 10,000 µM for 24 h and more than 1000 µM during the 48 h experiments. These results show that CA has lower cytotoxic activity than CAPE on MDA-MB-231 cells during both 24 and 48 h experiments.

For our research, we used one breast cancer line: MDA-MB-231 (human breast adenocarcinoma, TNBC, no. 92020424 SIGMA from Sigma-Aldrich, Poznań, Poland), which is a model of human triple-negative breast cancer. All manufacturer’s recommendations for preparing were carefully followed accordingly. The MDA-MB-231 cells were cultured with Leibovitz’s L-15 medium with 10% of inactivated fetal bovine serum (FBS, Sigma-Aldrich, Poznań, Poland) at 37 °C without CO2. The cultured cells were supplemented with antibiotics of the following concentrations: penicillin 100 U·mL−1, streptomycin 100 μg·mL−1 and fungistatic amphotericin B with a concentration of 0.25 μg·mL−1. We changed the medium every 48–72 h, with the passage carried out with a confluence of 80–90%.

Caffeic acid (CA, Sigma: C0625) and caffeic acid phenethyl ester (CAPE, Sigma: C8221) were purchased from Sigma-Aldrich (Poznań, Poland) and they were all stored, collected, and used strictly according to the manufacturer’s instruction.

Cytotoxicity of tested compounds (CA and CAPE) for use with the MDA-MB-231 line was measured by MTT (3-(4,5-dimethylthiazol-2-yl)-2-5 diphenyl tetrazolium bromide). Test of viability shows the cells’ ability to reduce MTT. After 24 and 48 h incubation of the cells with the test compounds (at concentrations of 10, 25, 50 and 100 µM), the medium was decanted and each well of MTT reagent was added at a final concentration of 1 mg/mL, and the samples then incubated for 4 h at 37 °C in 5% CO2. After this time, the supernatant was removed, and the water-insoluble formazan crystals were dissolved in 150 mL of DMSO. We used an ELISA plate reader (BioTek, Winooski, VT, USA) at a wavelength of 570 nm in order to read the absorbance. The same procedure we used for testing incubations of 48 h. Nutrient medium was used as a control group.

For the analysis of flow cytometric, MDA-MB-231 cells, at an amount of 5 × 105 cells per well, were plated in six well plates and allowed to stand for 24 and 48 h to obtain a logarithmic growth. The cells were incubated in a complete culture medium containing 10, 25, 50 and 100 µM of the tested compounds for 24 and 48 h. For the apoptotic assay, 1 × 106 of cells in suspension were transferred to the new tube and incubated with 100 µL of Annexin V & Dead Cell reagent (Merck Millipore, Warsaw, Poland) for 20 min at room temperature. The apoptosis was determined with a Muse Cell Analyzer (Warsaw, Poland); emission max.: yellow- red- 576 nm and 680 nm, excitation max.: 532 nm).

All results are expressed as means ± SD obtained from three separate experiments and performed in quadruplicates (n = 12). The results were performed with independent sample t-tests. The experimental means were compared to the means of untreated cells harvested in a parallel manner. Differences between 24 and 48 h incubated samples, were tested for significance using the one- and multiple-way Friedman ANOVA test. A p-value less than 0.05 were considered statistically significant.

With all the limitations of in vitro study, we conclude that using caffeic acid or CAPE for adjuvant therapy and/or chemoprevention is positive, but still inconclusive. Many promising results have been obtained studying selected biologically active substances isolated from bee propolis, especially polyphenols and propolis itself, but the inconsistent results make it too early to draw hard conclusions. However promising, further advanced studies are needed, particularly clinical trials, to confirm the clinical effectiveness of polyphenols on breast cancer treatment and prevention and there is still a need to know the full mechanism of CA and CAPE’s activities on cancer cells. Our comparison of CA and CAPE activity on the MDA-MB-231 clearly showed better activity of CAPE, for the same dosage and experiment time.

This study was supported by the research grant from Medical University of Silesia in Katowice, Poland, No. KNW 1-169/N/6/0.

The authors declare no conflict of interest. The founding sponsor had no role in the design of the study; in the collection, analyses, or interpretation of data; in the writing of the manuscript, nor in the decision to publish the results. 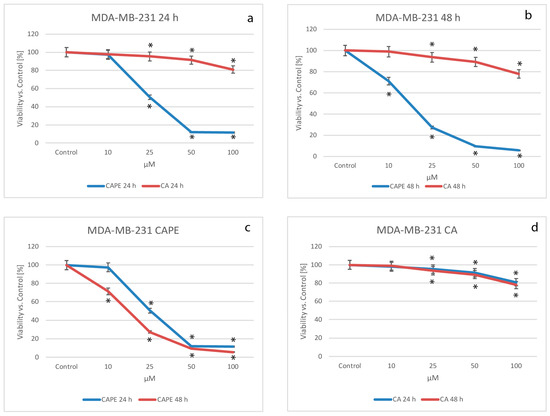 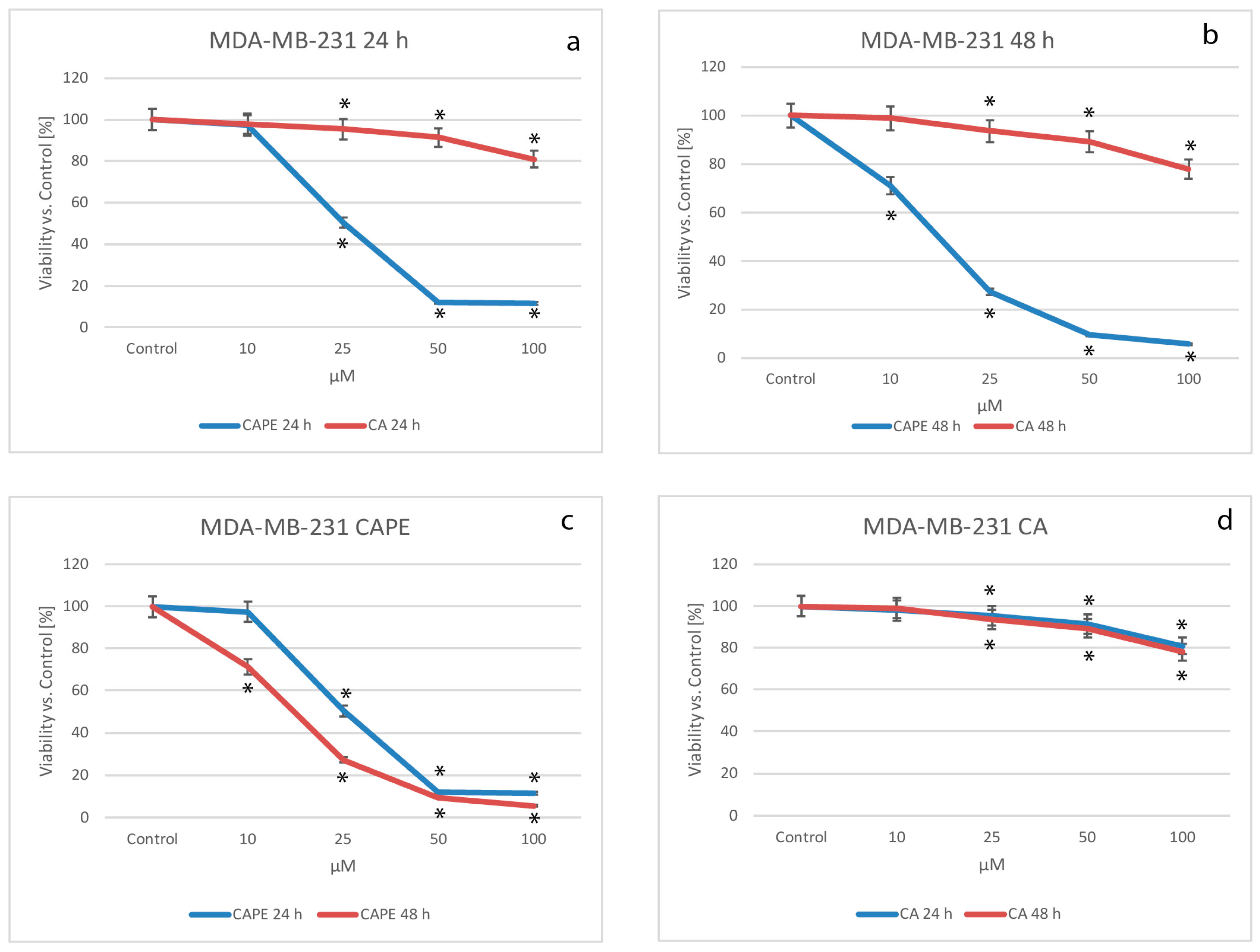 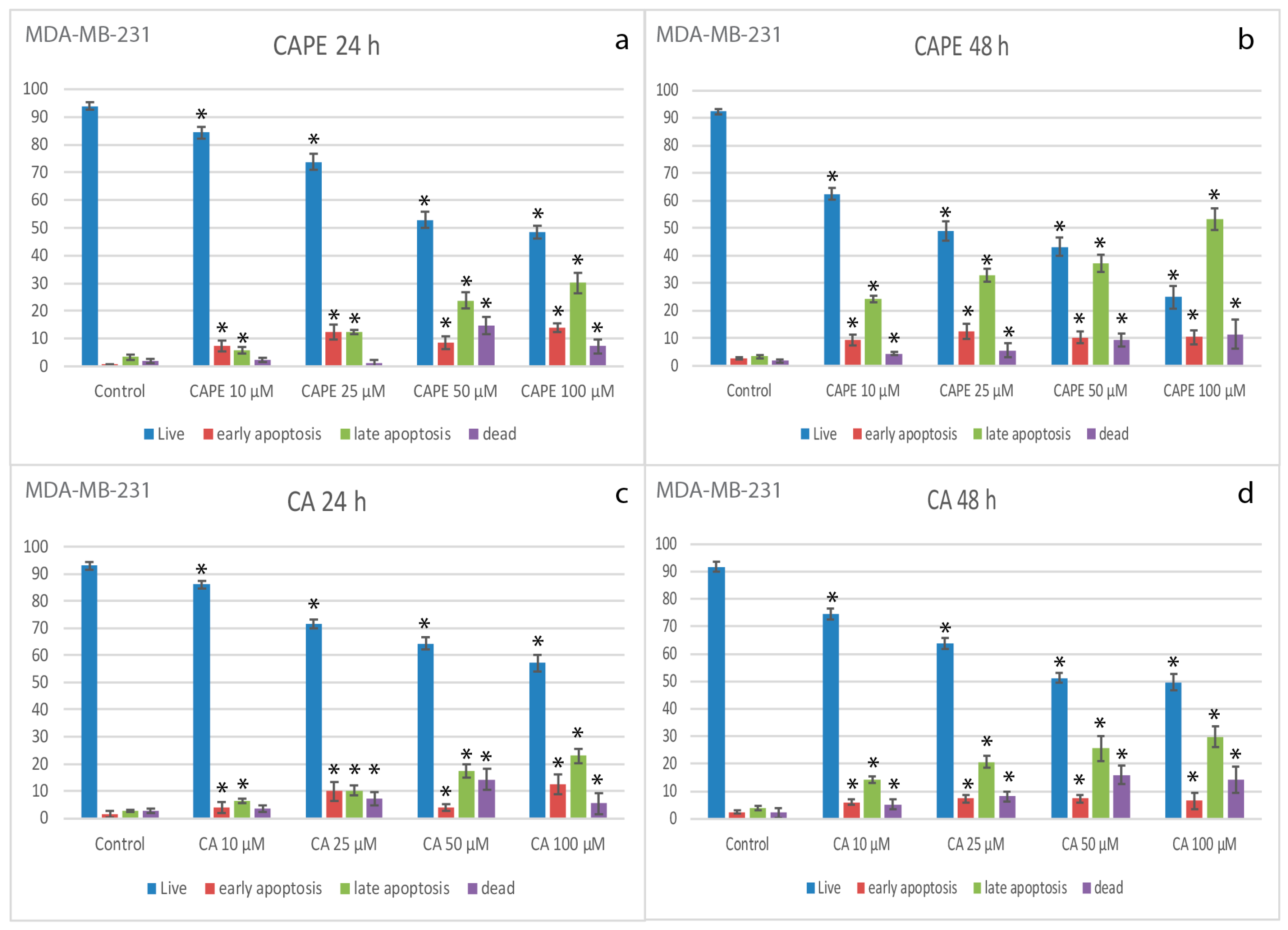 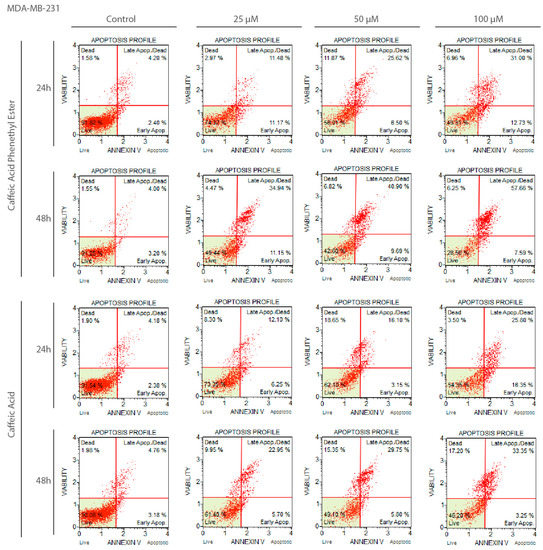 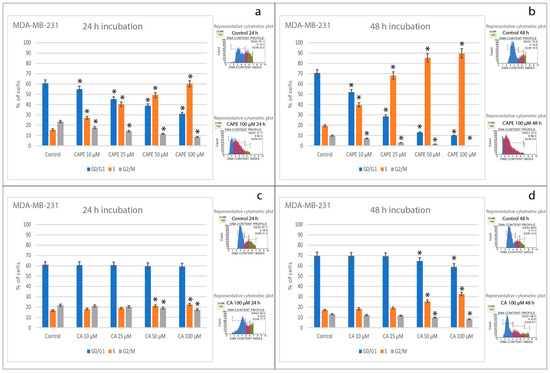