Neurotoxicity induces neuronal death and dysfunction of the neuronal network in neuronal cells [1]. Trimethyltin chloride (C3H9ClSn, TMT) and scopolamine are known to cause cognitive disorders by inducing neurotoxicity, [2,3,4]. TMT is a chemical compound which causes neuronal damage by inducing neuronal cell apoptosis in the hippocampus, eventually leading to neurotoxicity. Neurotoxicity produced by TMT also involves several molecular mechanisms such as oxidative stress, mitochondrial dysfunction, and neurotransmitter dysfunction [2]. Scopolamine, which acts as an inducer of cognitive deficits [5], has been used to study learning and memory impairment [6,7]. Recently, scopolamine was shown to generate neurotoxicity which increases cholinergic dysfunction and oxidative stress [8,9].
Diverse signaling pathways are related with TMT neurotoxicity. TMT increases the cleavage of poly (ADP-ribose) polymerase (PARP) related with apoptotic processes in neuronal cells [10]. In addition, TMT neurotoxicity augments activation of nicotinamide adenine dinucleotide phosphate hydrogen (NADPH) oxidase4 (NOX4) and reactive oxygen species (ROS) production [11]. The other factor, heme-oxygenase 1 (HO-1) is an enzyme which catalyzes the conversion of heme into biliverdin in response to oxidative stress [12,13]. Recently, a study has demonstrated that nuclear factor erythroid 2-related factor 2 (Nrf2)/HO-1 signaling pathways is increased by TMT and proceeds neuronal cell death [14].
Another mechanism of the neuroprotective signaling pathway damage caused by TMT neurotoxicity is activated by the response to TMT-induced neuronal damage. Neuronal cells damaged by TMT neurotoxicity release brain-derived neurotrophic factor (BDNF), which binds to tropomyosin-related kinase receptor type B (TrkB) and then phosphorylates TrkB. The phosphorylation of TrkB expresses the cyclic AMP responsive element binding protein (CREB) and increases BDNF transcription. Consequently, BDNF proceeds to protect neuronal cells from damage and to induce neurogenesis in response to neurotoxicity [2,15]. Additionally, acetylcholine (ACh) mediates neurotransmission for improving memory and learning function in the central nervous system. ACh is hydrolyzed by AChE which is an enzyme that breaks it down into choline and acetate [16]. Recently, a study has revealed that acetylcholinesterase (AChE), which is one of the risk factors of Alzheimer’s disease (AD), is increased by TMT [4,17].
Spirulina maxima (S. maxima) is a spiral-shaped microalgae which contains flavonoids and other polyphenols such as C-phycocyanin (C-PC) and chlorophyll a [18,19,20]. Many studies have shown that S. maxima has various beneficial effects, such as anti-inflammatory and anti-oxidant actions [20,21]. However, the mechanism behind the neuroprotective effects of S. maxima 70% ethanol extract (SM70EE) against neurotoxicity it is not fully known.
HT-22 cells, a type of mouse hippocampal cell, are commonly used in in vitro studies related with cognitive disorders. Many studies have demonstrated the neuroprotective effects of different phytochemicals on cognitive deficits and neurotoxicity via using HT-22 cells [22,23]. In addition, generally, mice are used to conduct behavior test in vivo studies of cognitive disorders [24]. Many studies have reported that natural compounds can prevent cognitive deficits caused by scopolamine in mice via conducting behavior tests [3,6]. The aim of this study was to investigate the neuroprotective effects of SM70EE against TMT-induced neurotoxicity in HT-22 neuronal cells. Furthermore, we investigated whether SM70EE can prevent learning and memory impairment caused by scopolamine-induced neurotoxicity in mice.

2.1. The Effects of SM70EE on Cell Viability and Neuronal Death in HT-22 Cells

To determine the effects of SM70EE on cognitive deficits, we performed passive avoidance and Morris water maze tests in mice which were orally administered 200/400 mg/kg body weight/day SM70EE, and 1 mg/kg body weight/day donepezil for 90 min before treatment with 1 mg/kg body weight/day scopolamine. As shown in Figure 4A, the step-through latency time of the scopolamine group (4.0 s) was decreased compared with control group. However, the step-through latency time was slightly increased by 400 mg/kg body weight/day SM70EE (8.8 s). We also measured the escape latency time through performing Morris water maze tests for 4 days. As shown in Figure 4B, the scopolamine treatment group of spent more time to find the platform, but the escape latency time was decreased by SM70EE. These findings indicated that SM70EE would prevent cognitive deficits caused by scopolamine-induced neurotoxicity in mice. To detect C-PC and chlorophyll a, we performed HPLC-PDA analysis. Our data showed that C-PC and chlorophyll a, which are active compounds in Spirulina maxima were present in SM70EE (Supplementary Material, Figure S1).

The project was approved by the institutional animal care and use committee (IACUC) of Kangwon National University. ICR mice (male, 3 weeks old) were obtained from the Dae Han Biolink Co. (Eumseong, Korea). The room was maintained with a 12 h light-dark cycle at 20 ± 3 °C. After adaptive period for a week, the mice were divided into five groups (n = 6 per group). The mice were fed with chow diet and orally administered by gavage once a day for 3 weeks (control, 200 and 400 mg/kg body weight/day SM70EE, and 1 mg/kg body weight/day donepezil). The mouse group of SM70EE and donepezil were administered orally 90 min before treatment with 1 mg/kg body weight/day scopolamine. The SM70EE was dissolved in 0.5%carboxymethylcellulose. The test was performed 30 min after scopolamine treatment.

The mice were tested in a passive avoidance shuttle box (Gemini, San Diego, CA, USA), which was divided into two chambers (illuminated and dark). The first day, mice were performed a training trial in the shuttle box. Each mouse was placed in the illuminated compartment for 2 min, and then when the mouse entered the dark compartment the door was closed, mouse feet received an electric shock (0.5 mA, 2 s). After 24 h, the test was given again, the mouse was placed in the illuminated compartment and the latency time to enter the dark compartment was measured (maximum testing time of the step-through latency was 180 s) [33].

The water maze consisted of a circular pool (90 cm in diameter) filled with water up to 30 cm and maintained at 20 ± 1 °C and area of the maze were defined as four equal quadrants. A white escape platform was placed in the center of one quadrant and submerged 1 cm below the surface of the water. All swimming behaviors of the mice were monitored and analyzed by a Smartver.2.5.21 (Panlab, Cornellà, Spain) video-tracking system. Mice were analyzed 3 times per day for 4 days. The time required to find the platform was investigated to determine the memory of the mice (maximum testing time of the escape latency was 120 s) [34].

HT-22 cells were grown in DMEM medium containing 3.7 g/L sodium bicarbonate, 1% P/S and 10% FBS at 37 °C in 5% CO2. When the cells were used in the experiments, the medium was replaced with serum free media overnight. Cells were pre-treated 50 and 100 μg/mL SM70EE for 4 h before treatment with 10 μM TMT for the indicated time. TMT and SM70EE were dissolved in deuterium-depleted water.

Cells were harvested by lysis buffer containing protease inhibitors and phosphatase inhibitor cocktail II, III. Protein extracts (25 μg) were separated via SDS-PAGE and transferred to a PVDF membrane. The membranes were blocked with 5%skim milk and immunoblotted with primary antibodies specific for indicated proteins for overnight. Secondary antibodies conjugated with horseradish peroxidase (1:5000) were applied for 4 h. The bands were visualized by enhanced chemiluminescence, and proteins were detected with LAS image software (Fuji, Valhalla, NY, USA). The protein expression level was quantified using Image J software and normalized against α-tubulin and control.

All statistical analyses were performed by using the Statistical Package for Social Sciences version 12.0 (SPSS Inc., Armonk, NY, USA). A one-way analysis of variance (ANOVA) was used for comparisons among the groups. Significant differences between the mean values were assessed using Duncan’s test. The p-value in the multiple comparison results (e.g., a, b, c, and d) indicate significant differences among the groups (p <0.05).

Supplementary materials are available online. Figure S1: HPLC chromatogram of C-PC and chlorophyll a in SM70EE. 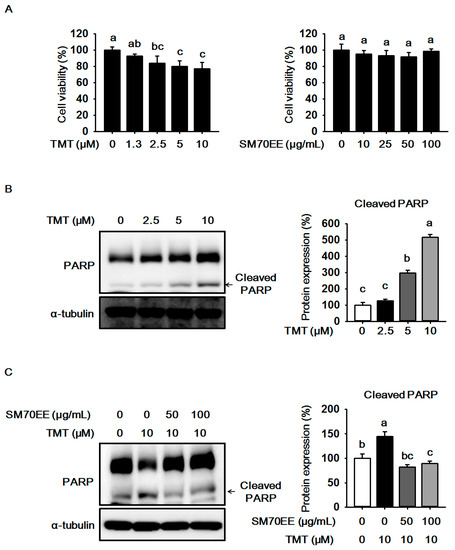 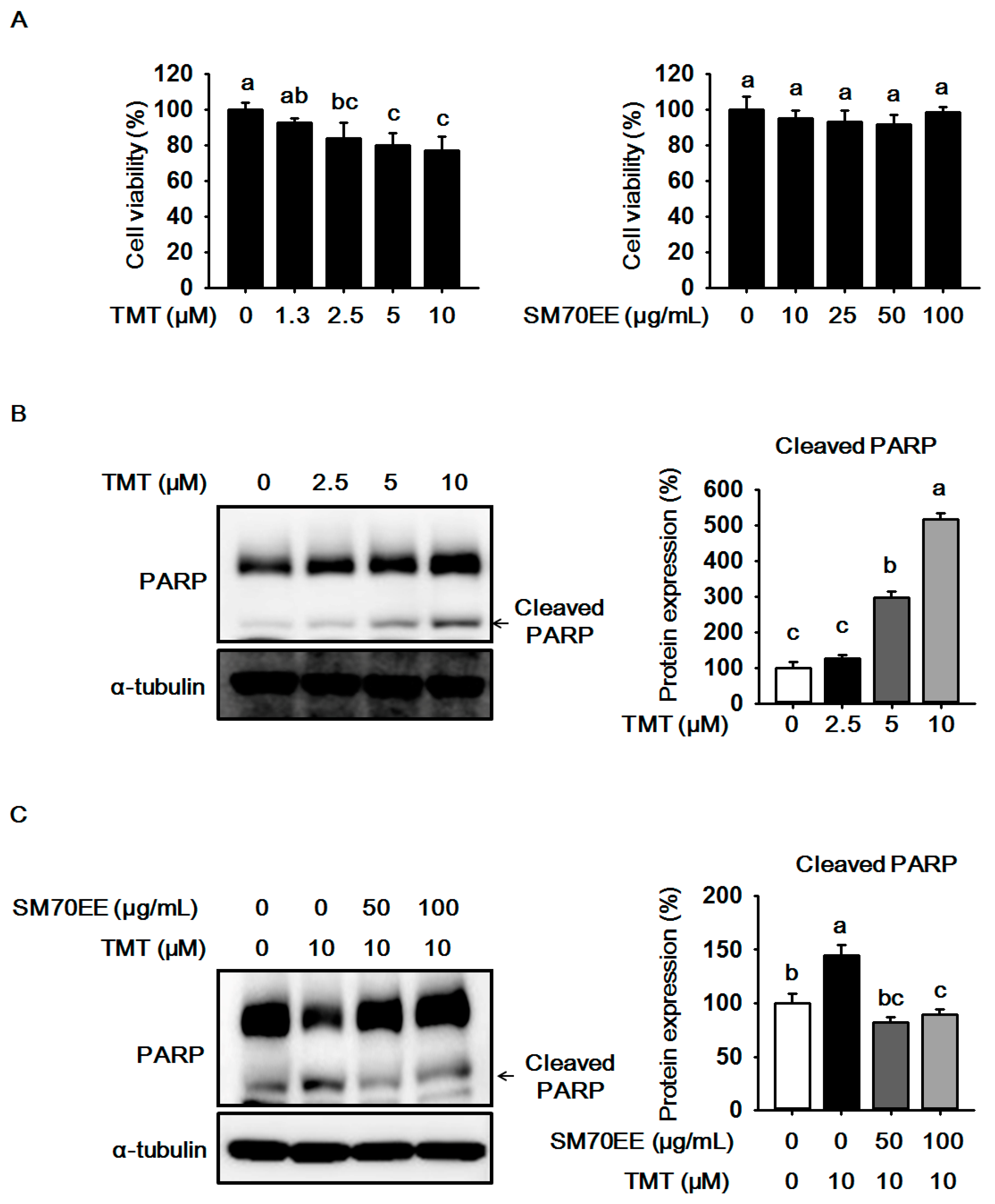