Neutron Crystallography for the Study of Hydrogen Bonds in Macromolecules

Arzanol (C22H26O7, Figure 1) is a naturally occurring acylphloroglucinol (ACPL) and is the major responsible for the anti-inflammatory, anti-oxidant, antibiotic and antiviral activities of Helichrysum italicum [1,2,3]. Antioxidant compounds are biologically important because they protect the organism against reactive oxygen species (ROS), thus contributing to prevent damages to the central nervous system and the insurgence of neurodegenerative diseases such as ischemia, Alzheimer’s disease, Parkinson’s disease and schizophrenia [4,5].
ACPLs [6] are derivatives of phloroglucinol (1,3,5-trihydroxybenzene) characterised by the presence of a COR group (acyl group), whose sp2 O can form an intramolecular hydrogen bond (IHB) with one of the two ortho OHs; following a practice introduced in previous works on ACPLs [7,8,9,10,11], this IHB (which is present in nearly all ACPLs) is here termed ‘first IHB’. In arzanol, R is a methyl group; an α-pyrone ring is attached to one position meta to the COR group (C3) and a prenyl chain is attached to the other meta position (C5). For the sake of conciseness, arzanol will be hereafter denoted as ARZ, the acylphloroglucinol moiety as PHL, the α-pyrone moiety as PYR and the prenyl chain as PRN.
The computational study of antioxidant ACPLs responds to the known tight relationships between the molecular properties of polyphenolic compounds and their biological activities [12,13,14]. The study of the ARZ molecule is also interesting in view of new information on ACPLs, as the fact that the PHL moiety is bonded to a ring of a different nature (PYR) makes ARZ different from the ACPLs considered so far [7,8,9,10,11], including the dimeric ACPLs in which both units are acylphloroglucinol moieties [15].
Thanks to the presence of the sp2 O and of three phenol OH in the PHL moiety, and an H-bond donor and two acceptors in the PYR moiety (H27, O23 and O26), the ARZ molecule can form up to three O–H···O IHBs simultaneously: the first IHB and two IHBs between the two moieties (one on each side of the methylene bridge); the latter will be termed IMHBs (for ‘intermoiety hydrogen bonds’) when it is expedient to emphasise that they join the two moieties (whereas IHBs may be used comprehensively when all the IHBs are considered). Furthermore, H16 or H17, when suitably oriented, can interact with the π bond in the PRN chain (O–H···π interaction, which is a type of H-bond). Thus, IHB patterns are the major features characterising conformers. The current work focuses mainly on ARZ IHB patterns. Because of this, high energy conformers have been calculated to obtain indications on the stabilising effect of each IHB, or set of IHBs, by considering the effect of their removal, although such conformers are largely unpopulated and not interesting as potential responsible of biological activities (for which a cautious threshold would consider only those with relative energy ≤3.5 kcal/mol in vacuo or in suitable solvents).
The mutual orientations of the PHL and PYR rings determine four sets of conformers, here denoted by different numbers (Figure 2). The set denoted by the number 3 had been the object of a preliminary study [16] exploring the main features to be considered in a thorough conformational study of the molecule. Orientations 1 and 2 differ only by the fact that the PYR ring is symmetrical with respect to the plane of the benzene ring; the same is true for orientations 3 and 4. IMHB patterns are different for the two sets (those of orientations 1 and 2 are different from those of orientations 3 and 4).
Conformers were calculated in the gas phase and in solution, considering the same three solvents as in the previous studies of ACPLs (chloroform, acetonitrile and water, [7,8,9,10,11]) to enable informative comparisons. These solvents cover the ranges of polarities and H-bonding abilities of the media in which a biologically active molecule may preferably be present within a living organism. An approximate estimation [17] of the octanol/water partition coefficient of ARZ yields 4.47673, suggesting that it may mostly be present in non-polar media, which would be satisfactorily modelled by chloroform. However, water always needs to be considered because it is by far the dominant medium in living organisms (with a proportion of ~70% in the human body); furthermore, the presence of several H-bond donor or acceptor sites in the ARZ molecule increases interest in considering its behaviour in water solution. Acetonitrile is the most commonly utilised non-protic polar solvent, both in calculations and in experimental studies.
The results confirm the stabilising effects of IHBs. The four lowest energy conformers contain three O–H···O IHBs and also the O–H···π interaction involving the π bond of the PRN chain.

Calculations were performed with the same levels of theory as in previous studies of ACPLs [7,8,9,10,11], to enable informative comparisons: Hartree Fock (HF) with the 6-31G(d,p) basis set and Density Functional Theory (DFT) with the B3LYP functional and the 6-31+G(d,p) basis set, both with fully relaxed geometry, and MP2 single-point (SP) calculations on the HF-optimised conformers. The general studies of ACPLs [7,8,9,10,11] had shown that HF gives reasonable results for this class of compounds and enables realistic trend-identifications with the reasonably cheap 6-31G(d,p) basis set. Inputs were prepared by considering all the possible IHB patterns for each mutual orientation of the two moieties; for each pattern, features already identified as relevant or non-negligible, such as the orientations of the phenol OHs not engaged in IHBs [7,8,9,10,11], were also considered.
DFT calculations were performed with fully relaxed geometry, utilising the HF-optimised geometries as inputs. DFT takes into account part of the correlation energy (whereas HF takes into account only the part related to Pauli’s exclusion principle). The B3LYP functional [18,19,20] is the most widely utilised functional in molecular calculations [21]. The 6-31+G(d,p) basis set was selected for DFT calculations because previous studies [7,8,9,10,11] had shown that the performance of DFT without diffuse functions on the heavy atoms is rather poor for ACPLs.
Vibrational frequencies (harmonic approximation) were calculated to verify that the identified stationary points are true minima, to obtain the zero-point energy (ZPE) corrections and to obtain an idea of the strength of the various IHBs through the red shifts of the frequency of the donor OHs. They were calculated at the DFT/B3LYP/6-31+G(d,p) level and scaled by 0.964, a factor recommended for this level [22].
The Møller–Plesset perturbation theory (MP2) takes into account both electron correlation and dispersion effects, which both play significant roles in H-bonding. However, MP2 calculations with fully relaxed geometry are very expensive for a molecule of this size (55 atoms). SP MP2 calculations were performed on the HF optimised geometries (the choice of HF results as the ones on which to perform MP2 calculations is natural, because an HF calculation constitutes the first step—providing the unperturbed results—in the MP2 algorithm). Although they do not improve the IHB parameters because of lack of geometry flexibility, SP MP2 results are useful for an additional comparison of energy trends.
Calculations in solution were performed with the Polarisable Continuum Model (PCM, [23,24,25,26,27,28]), in which the solvent is modelled by a continuous isotropic dielectric and the solute molecule is viewed as embedded in a cavity surrounded by the continuum solvent, with the geometry of the cavity following the geometry of the solute molecule consistently with its accessible surface for the given solvent. The default settings of Gaussian03 [29] for PCM were utilised, with the only exception of the SCFVAC non-standard input option to obtain more thermodynamic data. The calculations were performed at the DFT/B3LYP/6-31+G(d,p) level, both with full reoptimisation starting from the in-vacuo-optimised geometries and as SP calculations. A comparison of the two sets of results enables an assessment of the performance of SP calculations—relevant in view of the occurrence of PCM optimisation failure in a number of calculations with fully relaxed geometry.
All the calculations were performed with Gaussian 03, revision D01 [29].
All the energy values reported are in kcal/mol and all the length values are in Å. For conciseness sake, acronyms are utilised for the calculation methods and for the media, on reporting values: HF for HF/6-31G(d,p), DFT for DFT/B3LYP/6-31+G(d,p), MP2 for MP2/HF/6-31G(d,p), ‘vac’ for vacuum, ‘chlrf’ for chloroform, ‘actn’ for acetonitrile and ‘aq’ for water.
Detailed information about the data obtained, such as figures showing all the calculated conformers, tables reporting all the values of the computed quantities and also tables showing comparisons of relevant molecular properties, are included in the Supplementary Materials.

This study aimed at providing detailed information on the molecular properties of ARZ and on the factors influencing its conformational preferences. The importance of detailed information about biologically active molecules relates to the fact that their biological activity may be associated with the finest details of their molecular structure and properties [41]. Although only conformers with sufficiently low relative energy may be responsible for the biological activity, it was decided to also calculate higher energy conformers in order to assess the effect of individual energy-influencing factors, above all intramolecular H-bonding.
The results highlight the stabilizing effect of the first IHB, of the IMHBs, of the cooperativity between an IHB and an IMHB, and of the O–H···π interaction, thus showing that IHB patterns are the most important stabilizing factors. The trends of other factors are consistent with the general trends identified for ACPLs [7,9,10,11] when they do not interplay with IHB patterns; e.g., the effect of the orientation of the phenol OHs is analogous to that identified for ACPLs for those OHs that are not engaged in IMHBS.
The results in solution are also consistent with the trends identified for ACPLs [8,42] and suggest that the first IHB and most of the IMHBs do not break in a water solution. A separate study of adducts of arzanol with explicit water molecules is planned to verify this inference.

The supplementary materials are available online.

The author declares no conflict of interest. The work had no funding sponsors. 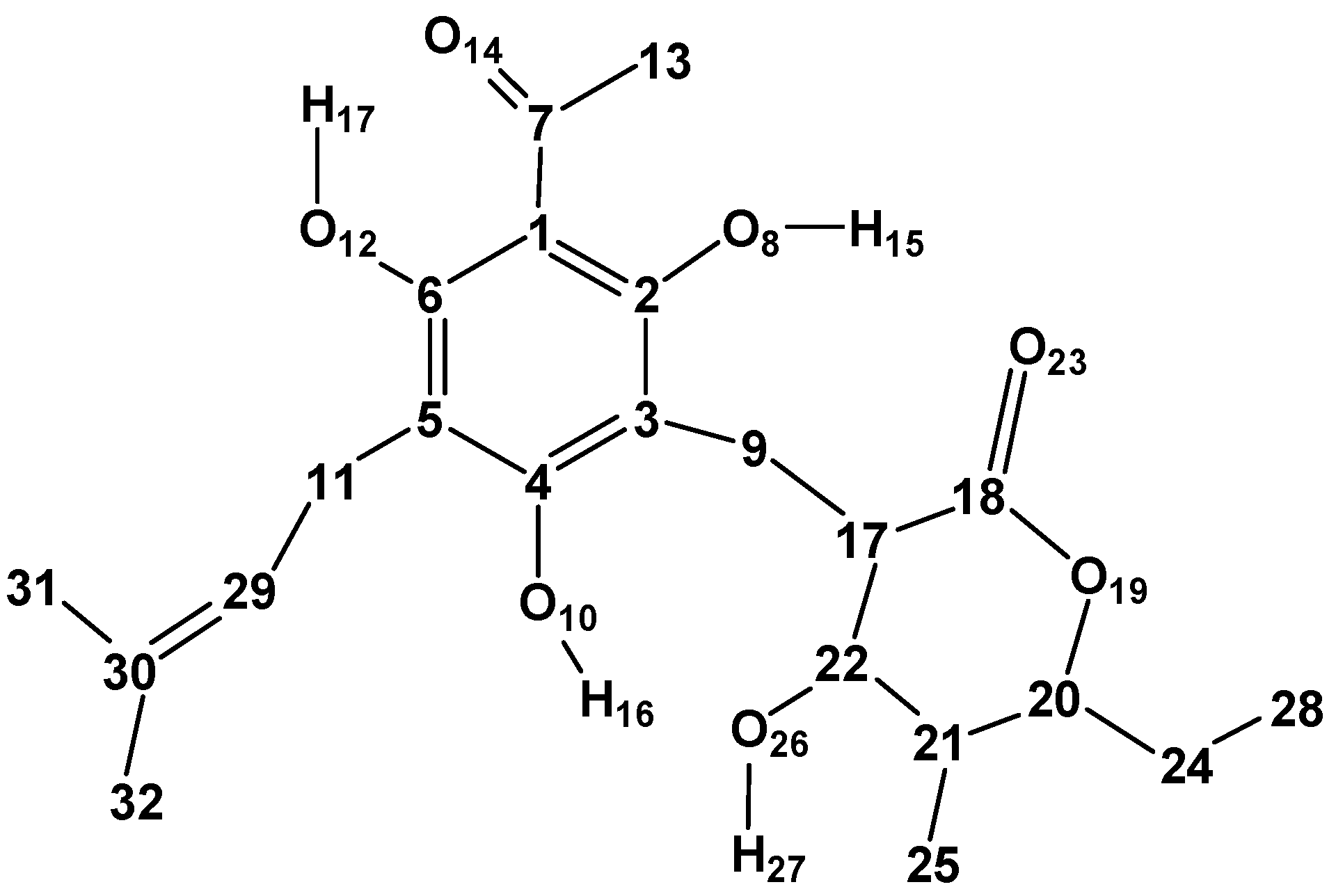 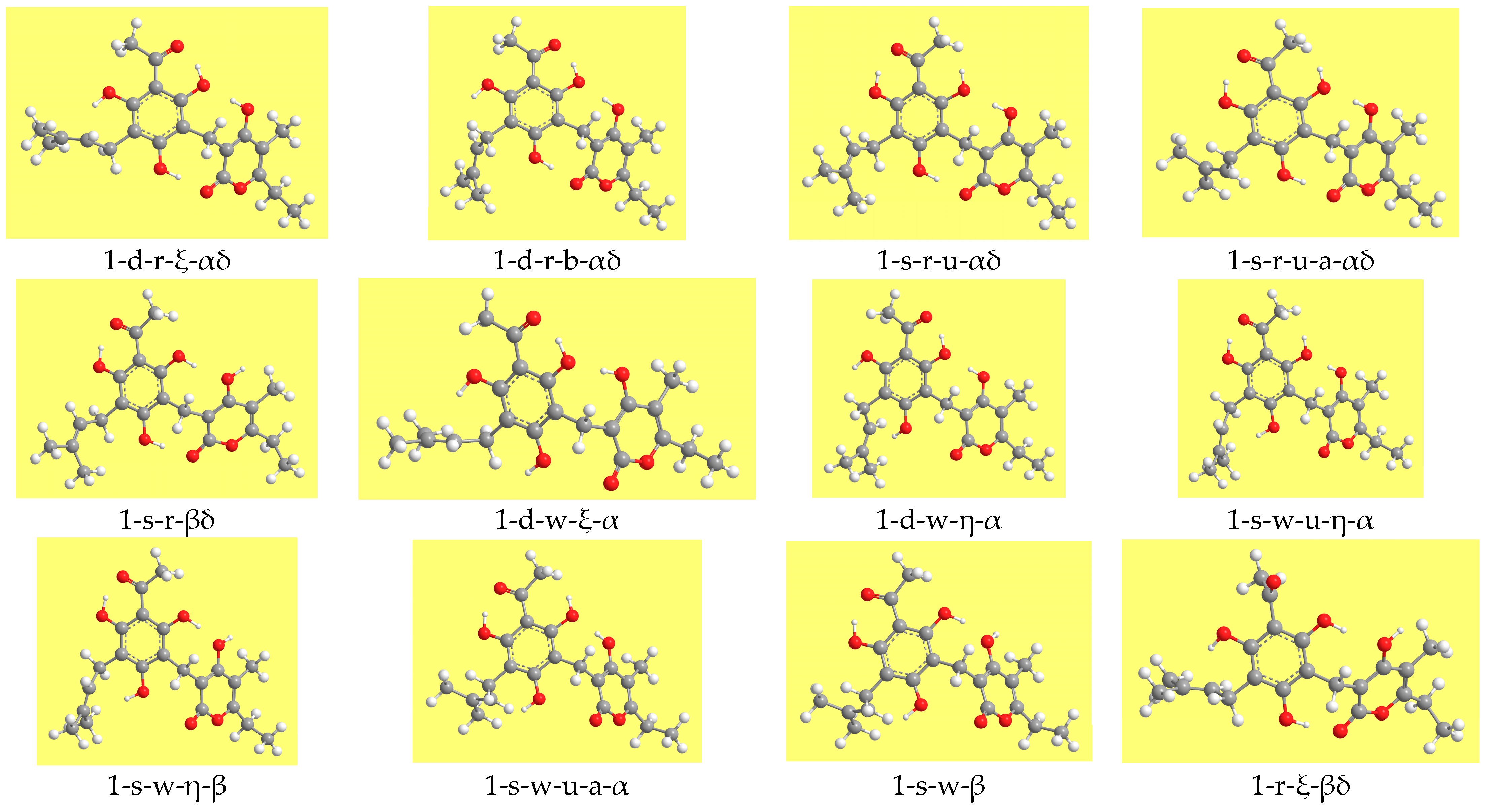 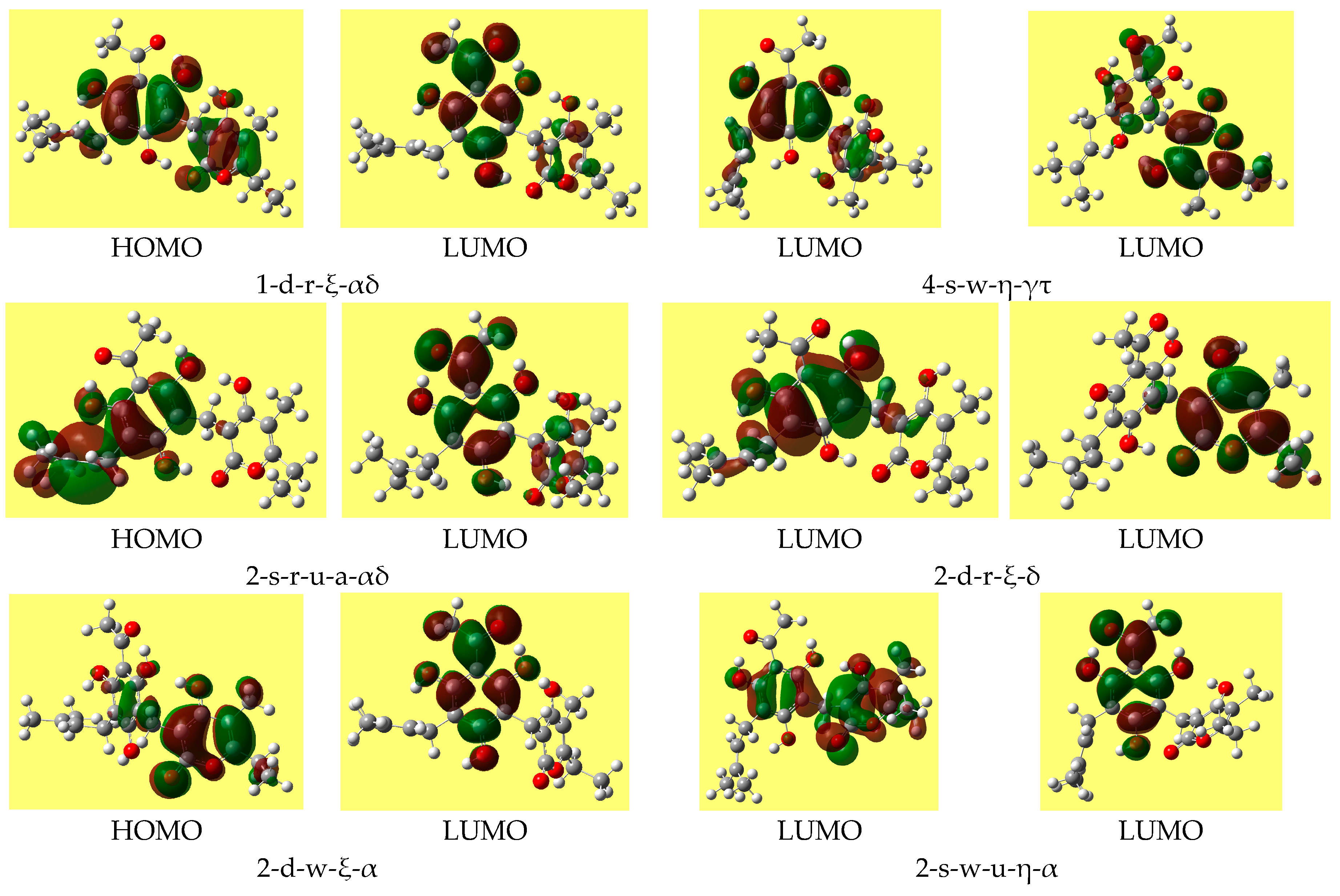