Pomegranate for Prevention and Treatment of Cancer: An Update

Defects in p53 and nuclear factor-kappa B (NF-κB) signaling pathways are frequently observed in the initiation and development of various human malignancies, including prostate cancer. Clinical studies demonstrate higher expression of NF-κB/p65/RelA, NF-κB/p50/RelB, and cRel as well as downregulation of the p53 network in primary prostate cancer specimens and in metastatic tumors. Betulinic acid (BA), is a triterpenoid that has been reported to be an effective inducer of apoptosis through modification of several signaling pathways. Our objective was to investigate the pathways involved in BA-induced apoptosis in human prostate cancer cells. We employed the androgen-responsive LNCaP cells harboring wild-type p53, and androgen-refractory DU145 cells possessing mutated p53 with high constitutive NF-κB activity. Inhibition of cell survival by BA at 10 and 20 µM concentrations occurred as a result of alteration in Bax/Bcl-2 ratio in both cell lines that led to an increased cytochrome C release, caspase activation and poly(ADP)ribose polymerase (PARP) cleavage, leading to apoptosis. BA treatment resulted in stabilization of p53 through increase in phosphorylation at Ser15 in LNCaP cells, but not in DU145 cells, and induction of cyclin kinase inhibitor p21/Waf1 in both cell types. Furthermore, treatment of both prostate cancer cells with BA decreased the phosphorylation of IκB kinase (IKK)α and I-kappa-B-alpha (IκBα) inhibiting the nuclear location of NF-κB/p65 causing cytosolic accumulation and resulting in its decreased nuclear binding. We demonstrate that BA may induce apoptosis by stabilizing p53 and downregulating NF-κB pathway in human prostate cancer cells, irrespective of the androgen association, and therefore can potentially be developed as a molecule of interest in cancer chemoprevention. View Full-Text
Keywords: prostate cancer; chemoprevention; apoptosis; betulinic acid; triterpenoid prostate cancer; chemoprevention; apoptosis; betulinic acid; triterpenoid
►▼ Show Figures 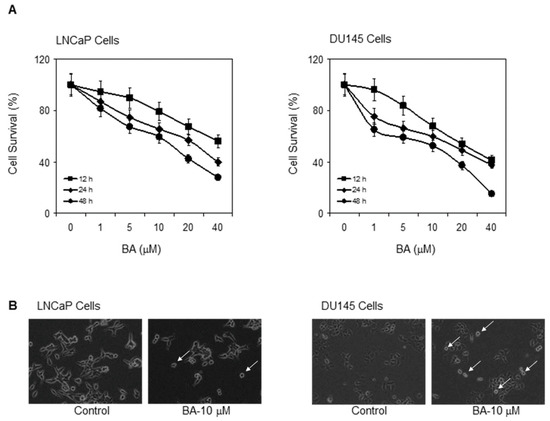