A Review on the Phytochemistry, Pharmacology, Pharmacokinetics and Toxicology of Geniposide, a Natural Product
Previous Article in Journal

Due to the side effects of synthetic drugs, the therapeutic potential of natural products for Alzheimer’s disease (AD) has gained interest. Morinda officinalis has demonstrated inhibitory effects on geriatric diseases, such as bone loss and osteoporosis. However, although AD is a geriatric disease, M. officinalis has not been evaluated in an AD bioassay. Therefore, M. officinalis extracts and fractions were tested for AD-related activity, including inhibition of acetylcholinesterase (AChE), butyrylcholinesterase (BChE), β-site amyloid precursor protein cleaving enzyme 1 (BACE1), and advanced glycation end-product (AGE) formation. A bioassay-guided approach led to isolation of 10 active compounds, eight anthraquinones (1–8), one coumarin (9), and one phytosterol (10), from n-hexane and ethyl acetate fractions of M. officinalis. The five anthraquinones (4–8) were stronger inhibitors of AChE than were other compounds. Compounds 3 and 9 were good inhibitors of BChE, and compounds 3 and 8 were good inhibitors of BACE1. Compounds 1–5 and 7–9 were more active than the positive control in inhibiting AGE formation. In addition, we first suggested a structure-activity relationship by which anthraquinones inhibit AChE and BACE1. Our findings demonstrate the preventive and therapeutic efficacy of M. officinalis for AD and its potential use as a natural alternative medicine. View Full-Text
Keywords: Morinda officinalis; bioassay-guided isolation; Anthraquinone; Alzheimer’s diseases; structure-activity relationship Morinda officinalis; bioassay-guided isolation; Anthraquinone; Alzheimer’s diseases; structure-activity relationship
►▼ Show Figures 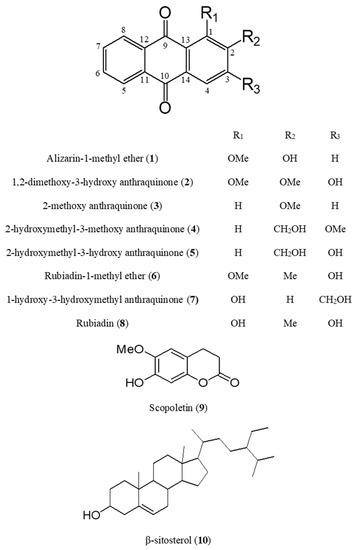