Purpose: Depression is a sickening psychiatric condition that is prevalent worldwide. To manage depression, the underlying modes of antidepressant effect of herbals are important to be explored for the development of natural drugs. Tiansi Liquid is a traditional Chinese medicine (TCM) that is prescribed for the management of depression, however its underlying mechanism of action is still uncertain. The purpose of this study was to systematically investigate the pharmacological mode of action of a herbal formula used in TCM for the treatment of depression. Methods: Based on literature search, an ingredients-targets database was developed for Tiansi Liquid, followed by the identification of targets related to depression. The interaction between these targets was evaluated on the basis of protein-protein interaction network constructed by STITCH and gene ontology (GO) enrichment analysis using ClueGO plugin. Results: As a result of literature search, 57 components in Tiansi Liquid formula and 106 potential targets of these ingredients were retrieved. A careful screening of these targets led to the identification of 42 potential targets associated with depression. Ultimately, 327 GO terms were found by analysis of gene functional annotation clusters and abundance value of these targets. Most of these terms were found to be closely related to depression. A significant number of protein targets such as IL10, MAPK1, PTGS2, AKT1, APOE, PPARA, MAPK1, MIF, NOS3 and TNF-α were found to be involved in the functioning of Tiansi Liquid against depression. Conclusions: The findings elaborate that Tiansi Liquid can be utilized to manage depression, however, multiple molecular mechanisms of action could be proposed for this effect. The observed core mechanisms could be the sensory perception of pain, regulation of lipid transport and lipopolysaccharide-mediated signaling pathway. View Full-Text
Keywords: biological effects; Cytoscape; depression; mechanism of action; molecular targets; Tiansi Liquid; STITCH biological effects; Cytoscape; depression; mechanism of action; molecular targets; Tiansi Liquid; STITCH
►▼ Show Figures 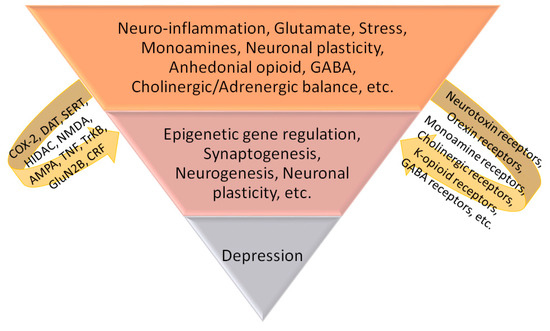