The present study develops further our previous study of in vivo monitoring at the molecular level of the embryonic development in Japanese medaka fish (Oryzias latipes) using near-infrared (NIR) spectroscopy and NIR imaging. NIR spectra were measured nondestructively for three major parts of fertilized medaka eggs (the embryonic body, oil droplets, and egg yolk) from the first day after fertilization to the day just before hatching (JBH). Changes in the contents of chemical components such as proteins, water, and lipids were monitored in situ during embryonic development. A marked change in the relative content of weakly hydrogen-bonded water was observed in the egg yolk JBH. Principal component analysis (PCA) was carried out using the NIR spectra data of the egg yolk and embryo on the fifth day after fertilization. The PCA clearly separates the egg yolk data from the embryo body parts. Principal component PC1 and PC2 loading plots suggest that the hydrogen bonding structure of water in the egg yolk is considerably different to those of the other parts and the fraction of weakly hydrogen-bonded water in the egg yolk is smaller than that in the embryonic body. NIR images developed from the intensities of peaks of second derivative spectra owing to water and proteins show their different distribution patterns. Images of the ratio of strongly and weakly hydrogen-bonded water confirmed that oil droplets and embryonic body parts have higher and lower ratios, respectively, of strongly hydrogen-bonded water than do the other parts. The images developed from the intensity of the peaks at 4864 and 4616 cm−1 related to the proteins indicated that the egg yolk contains a higher concentration of protein than do the other parts. The peaks at 5756 and 4530 cm−1 caused by the protein secondary structures of α-helix and β-sheet showed the configuration of the egg cell membrane. The present study might lead to new understanding at the molecular level regarding the growth of fertilized eggs and provides a new tool to visualize egg development in a nondestructive manner. View Full-Text
Keywords: NIR spectroscopy and imaging; in vivo monitoring; fertilized egg NIR spectroscopy and imaging; in vivo monitoring; fertilized egg
►▼ Show Figures 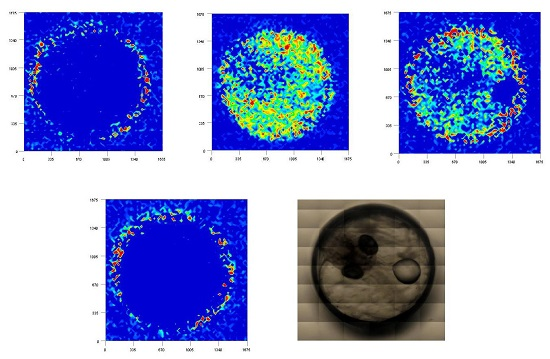