Capsaicin: Current Understanding of Its Mechanisms and Therapy of Pain and Other Pre-Clinical and Clinical Uses

The complexity of traditional Chinese medicines (TCMs) is related to their multi-component system. TCM aqueous decoction is a common clinical oral formulation. Between molecules in solution, there exist intermolecular strong interactions to form chemical bonds or weak non-bonding interactions such as hydrogen bonds and Van der Waals forces, which hold molecules together to form “molecular aggregates”. Taking the TCM Puerariae lobatae Radix (Gegen) as an example, we explored four Gegen decoctions of different concentration of 0.019, 0.038, 0.075, and 0.30 g/mL, named G-1, G-2, G-3, and G-4. In order of molecular aggregate size (diameter) the four kinds of solution were ranked G-1 < G-2 < G-3 < G-4 by Flow Cell 200S IPAC image analysis. A rabbit vertebrobasilar artery insufficiency (VBI) model was set up and they were given Gegen decoction (GGD) at a clinical dosage of 0.82 g/kg (achieved by adjusting the gastric perfusion volume depending on the concentration). The HPLC fingerprint of rabbit plasma showed that the chemical component absorption into blood in order of peak area values was G-1 < G-2 > G-3 > G-4. Puerarin and daidzin are the major constituents of Gegen, and the pharmacokinetics of G-1 and G-2 puerarin conformed with the two compartment open model, while for G-3 and G-4, they conformed to a one compartment open model. For all four GGDs the pharmacokinetics of daidzin complied with a one compartment open model. FQ-PCR assays of rabbits’ vertebrobasilar arterial tissue were performed to determine the pharmacodynamic profiles of the four GGDs. GGD markedly lowered the level of AT1R mRNA, while the AT2R mRNA level was increased significantly vs. the VBI model, and G-2 was the most effective. In theory the dosage was equal to the blood drug concentration and should be consistent; however, the formation of molecular aggregates affects drug absorption and metabolism, and therefore influences drugs’ effects. Our data provided references for the rational use of Chinese medicines in the clinic, such as the best oral preparation and decoction concentration. View Full-Text
Keywords: Puerariae lobatae Radix decoction; molecular aggregation; pharmacokinetic profiles; pharmacodynamic profiles Puerariae lobatae Radix decoction; molecular aggregation; pharmacokinetic profiles; pharmacodynamic profiles
►▼ Show Figures 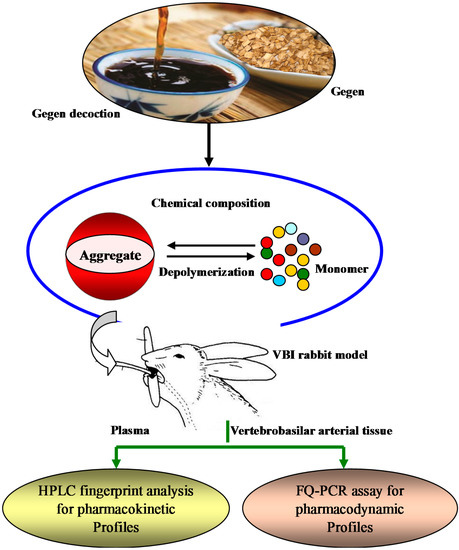