From Nanorods to Nanowires of CdS Synthesized by a Solvothermal Method: Influence of the Morphology on the Photoactivity for Hydrogen Evolution from Water
Next Article in Special Issue

In the present study, we investigated the tissue distribution and urinary excretion of gallic acid (GA) and protocatechuic acid (PCA) after rat oral administration of aqueous extract of Polygonum capitatum (P. capitatum, named Herba Polygoni Capitati in China). An UHPLC-MS/MS analytical method was developed and adopted for quantification of GA and PCA in different tissue homogenate and urine samples. Interestingly, we found that GA and PCA showed a relatively targeted distribution in kidney tissue after dosing 60 mg/kg P. capitatum extract (equivalent to 12 mg/kg of GA and 0.9 mg/kg of PCA). The concentrations of GA and PCA in the kidney tissue reached 1218.62 ng/g and 43.98 ng/g, respectively, at one hour after oral administration. The results helped explain the empirical use of P. capitatum for kidney diseases in folk medicine. Further studies on urinary excretion of P. capitatum extract indicated that GA and PCA followed a concentrated elimination over a 4-h period. The predominant metabolites were putatively identified to be 4-methylgallic acid (4-OMeGA) and 4-methylprotocatechuic acid (4-OMePCA) by analyzing their precursor ions and characteristic fragment ions using tandem mass spectrometry. However, the amount of unchanged GA and PCA that survived the metabolism were about 14.60% and 15.72% of the total intake, respectively, which is reported for the first time in this study. View Full-Text
Keywords: distribution; excretion; Polygonum capitatum extract; gallic acid; protocatechuic acid distribution; excretion; Polygonum capitatum extract; gallic acid; protocatechuic acid
►▼ Show Figures 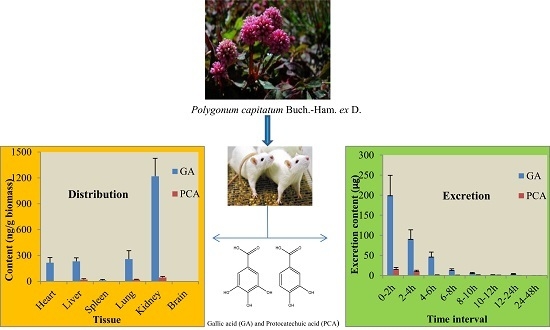