The Impact of Melatonin in Research

Quantitative Variation of Flavonoids and Diterpenes in Leaves and Stems of Cistus ladanifer L. at Different Ages

The compounds derived from secondary metabolism in plants perform a variety of ecological functions, providing the plant with resistance to biotic and abiotic factors. The basal levels of these metabolites for each organ, tissue or cell type depend on the development stage of the plant and they may be modified as a response to biotic and/or abiotic stress. As a consequence, the resistance state of a plant may vary in space and time. The secondary metabolites of Cistus ladanifer have been quantified in leaves and stems throughout autumn, winter, spring and summer, and at different ages of the plant. This study shows that there are significant differences between young leaves, mature leaves and stems, and between individuals of different ages. Young leaves show significantly greater synthesis of flavonoids and diterpenes than mature leaves and stems, with a clear seasonal variation, and the differences between leaves at different growth stages and stems is maintained during the quantified seasons. With respect to age, specimens under one year of age secreted significantly lower amounts of compounds. The variation in the composition of secondary metabolites between different parts of the plant, the season and the variations in age may determine the interactions of Cistus ladanifer with the biotic and abiotic factors to which it is exposed.
Keywords: Cistus ladanifer L.; phenols; flavonoids; diterpenes; age; quantitative variation Cistus ladanifer L.; phenols; flavonoids; diterpenes; age; quantitative variation

Plants have developed diverse strategies for protection against different stressful factors; on the one hand, the development of structures like thorns, glandular hairs and foliar trichomes [1,2] and, on the other hand, the production of secondary metabolites. The latter have a variety of roles in the life of plants: they act as defence against predators and pathogens, acting as deterrents and inhibitors of feeding and oviposition [3,4,5], inhibiting insect growth and development [6,7], as allelopathic agents [8,9,10], enhancing the attraction of pollinators [11,12], resistance to viruses [13], protection against ultraviolet radiation [14,15], even acting as signal molecules for nodulation in legume-Rhizobium symbiosis [12,16] and as antioxidant agents [17,18].
Secondary metabolites vary qualitatively and quantitatively between different species and also between populations of the same species, between individuals of those populations and between the organs of a certain individual, to such an extent that some authors defend phenolic quantification as an effective method to assess the level of chemical defence of a plant [19,20,21,22,23].
Cistus ladanifer L. (rock-rose or “jara”) is a Mediterranean shrub [24,25] that is widely distributed over western Iberia and northern Morocco [26], growing under very diverse and extreme climates and standing cold stress, dryness and high temperatures [27]. Through its leaves and photosynthetic stems, this species secretes an exudate that has been studied by different authors [28], mainly due to its interest in the perfume, pharmaceutical and food industries [29,30].
The exudate of C. ladanifer is composed fundamentally of compounds of phenolic and terpene origin [31,32,33,34,35,36,37]. In previous studies it has been shown that the phenolic compounds synthesized by C. ladanifer, in particular aglycone flavonoids (apigenin (Ap), kaempferol 3-methyl ether (K-3), apigenin 4′-methyl ether (Ap-4′), apigenin 7-methyl ether (Ap-7) and kaempferol 3,7-di-O-methyl ether (K-3.7)) constitute between 6% and 26%, of the dry weight of the exudate, depending on the season [38]. Their synthesis is markedly seasonal: they are the majority products in summer, but in winter their presence is at a minimum [34]. Studies quantifying the terpenes have found that the concentrations in the exudate of C. ladanifer are generally in the range of 1%–2% dry weight of the exudate [35] and that the majority terpenes are three diterpenes (6-acetoxy-7-oxo-8-labden-15-oic acid (D1), 7-oxo-8-labden-15-oic acid (D2), oxocativic acid (D3)). Figure 1 shows the molecular structures of these compounds (flavonoids and diterpenes).
In previous studies [39,40] we have shown that the synthesis of secondary metabolites in Cistus ladanifer L. varies and is induced by ecological factors such as UV-light, hydric stress and temperature. This compounds have been shown to function as UV filters [39,41], as protectors against herbivory [38], and as allelopathic agents [8,9,10,42]. Moreover, the aqueous extract of C. ladanifer was able to generate antioxidante, antibacterial and antifungal activities in a dose-dependent manner [43,44].
For all that and to further contribute to a better understanding of the capacity of C. ladanifer to respond to different environmental conditions and therefore to the relative resistance state of this shrub, the main objective of the present study is to determine how the chemical profile changes at different ages of the plant, between seasons and between organs (leaves in different stages of development and stems). The results may be helpful in illustrating the importance of secondary compounds in C. ladanifer against biotic and abiotic factors.

2.1. Quantitative Variation of Flavonoids and Diterpenes between Young Leaves, Mature Leaves and Stems

2.2. Quantitative Variation of Flavonoids and Diterpenes between Ages

For the quantification of secondary metabolites in leaves and stems, 20 individuals of 20 mm in trunk base diameter (approximately 12 years of age according to the equation y = 1.5496x + 1.5342R2 = 0.9221 [90]) were selected from a stand of the species (“jaral”) in Alburquerque, in the north-west of the Province of Badajoz (SW Spain, 39°08′05.1″ N–7°00′40.54″ O). Table 3 lists the climatic characteristic (rainfall and maximum and minimum temperaturas) for this location [91,92].
At the end of each season, three types of samples were taken from each individual: young leaves (sprouts at the apical part), mature leaves (approximately 6 months of age) and photosynthetic stems (i.e., the apex that had grown during the study year, with a diameter of 1.15–2.25 mm). The samples were individually packed in situ, numbered and then stored in bags until they were analysed later in the laboratory (the same day as the sampling). Samples were collected seasonally over two consecutive years.
In order to quantify the age-dependent variability in the composition of secondary metabolites, 110 plants from the rock-rose population previously described were selected on the basis of their different height and stem diameter. Height was measured using a measuring tape and stem diameter using a caliper at the base. Five samples of leaves and photosynthetic stems were collected from each plant and stored at −18 °C. Then, for ring counting, the trunk of each individual was cut at 5 cm from the ground.

Plant age was determined by counting the annual growth rings. A ring per year was assumed, following the pattern observed in temperate zones [93]. To this end, sections of stem brought to the laboratory from the field work were mounted on wooden supports and sanded down. The sanded surface was wetted, and the growth rings counted under a magnifying glass. For each specimen, counts were made by at least 5 people, the extreme values (above and below) were discarded and the mean value was taken.
Once the age of each of the 110 individuals was determined, three individuals of each age range were selected and the samples of young leaves, mature leaves and stems from those individuals were analysed.
In order to quantify the compounds by age, the data of the individuals were binned into age groups in series of 5 years each and the means were taken for the different organs studied.

4.3. Extraction and Assay of Secondary Metabolites

Approximately 1 g wet weight of young and mature leaves and stems were taken in three replicates per plant and sample type. The exudate was extracted with chloroform at a ratio of 1:10 w/v to ensure complete extraction of flavonoids and diterpenes [34,41,94,95,96]. The chloroform was evaporated off under a fume hood at a temperature not exceeding 30 °C and the pellet was re-suspended in 3 mL of methanol. The resulting solution was kept frozen at −20 °C for 12 h to precipitate out the waxes which were then removed by centrifugation and the supernatant was stored at 4 °C for its subsequent analysis [33,97].
The assay of secondary metabolites was carried out by HPLC (Waters, Cerdanyola del Vallès, Spain; Pumps: 515 HPLC Pump; 717-plus Autosampler Injector; 996 Photodiode Array Detector). 80 µL of each sample were injected into a Spherisorb C-18 5 µ 4.6 × 250 mm reverse phase analytical column. The mobile phase used was water/methanol/tetrahydrofuran in the proportion 56/16/28 at a 0.75 mL/min flow rate. The chromatograms were recorded at a maximum wavelength of 350 nm for flavonoids and 250 nm for diterpenes. These conditions yield a chromatogram with optimal resolution for the identification of the five flavonoids [34,41,96] and three diterpenes [35,68] present in the exudate of C. ladanifer. The compounds were identified on the basis of their retention times and spectral characteristics [34,41,96]. The detection of flavonoids and diterpenes and the determination of the linear calibration equation were carried out as described in [98]. Finally, the results obtained were expressed with reference to the leave or stem dry weight.

The data were non-normally distributed; therefore, non-parametric statistical tests were applied. In particular, the results were first submitted to the Friedman test (SPSS-Win 15.0 SPSS Inc., Chicago, IL, USA) to determine whether there were significant differences between seasons, organs and ages, and then the Wilcoxon test for paired samples (SPSS-Win 15.0) was applied to establish between which seasons, organs and ages there were significant differences. Differences were considered significant at a level of p ≤ 0.05.

This research was supported by Junta of Extremadura (GR-15017), the European Regional Development Funds and project number: 3PRO5A084. We thank Manuel Mota for his help with the statistical treatment. 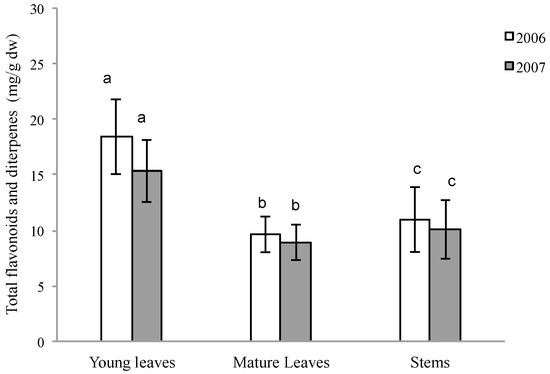 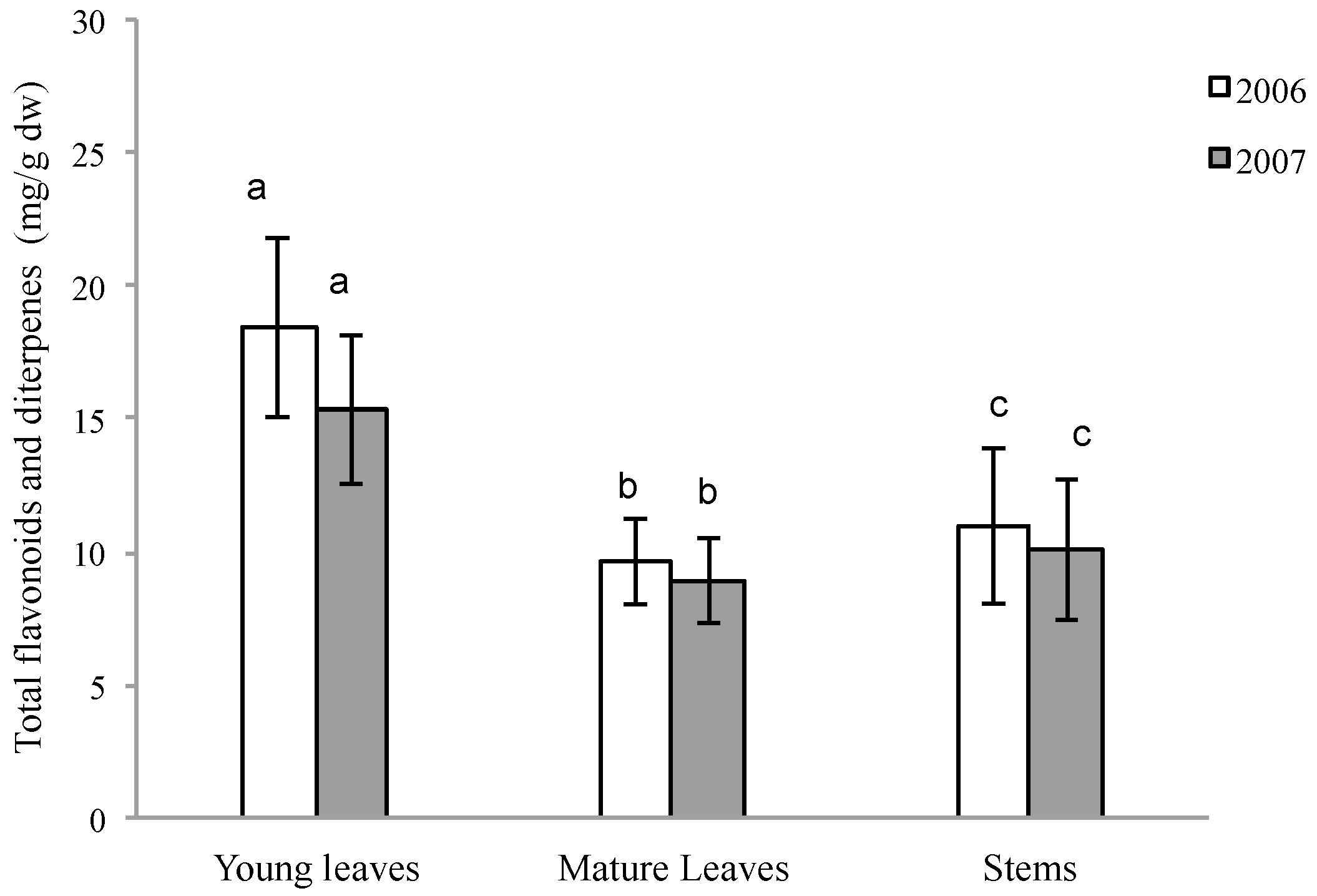 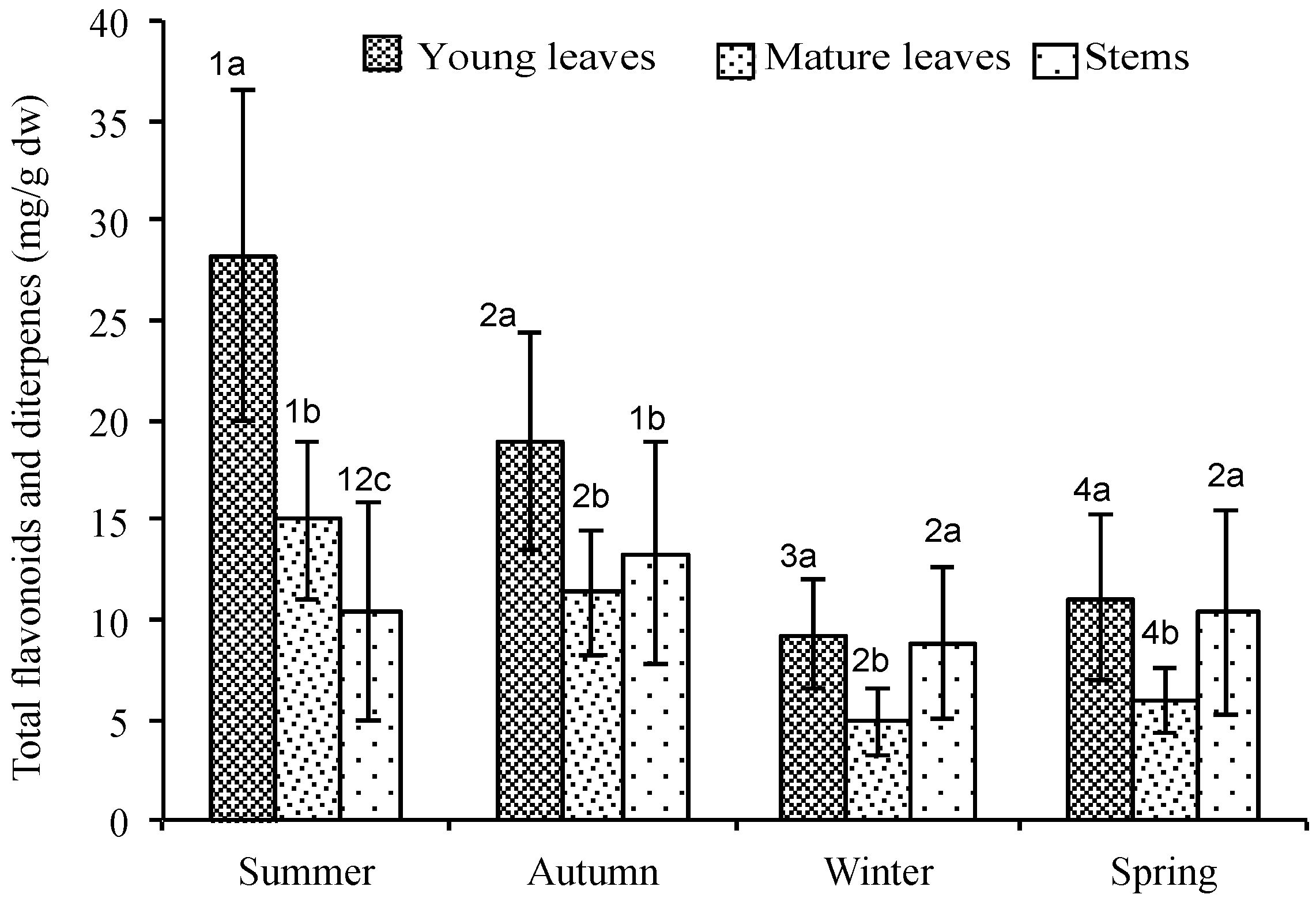 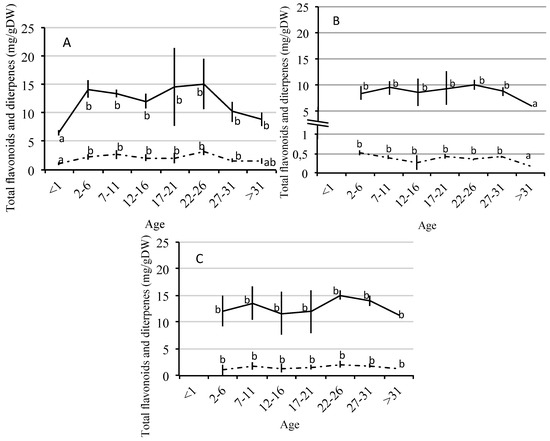 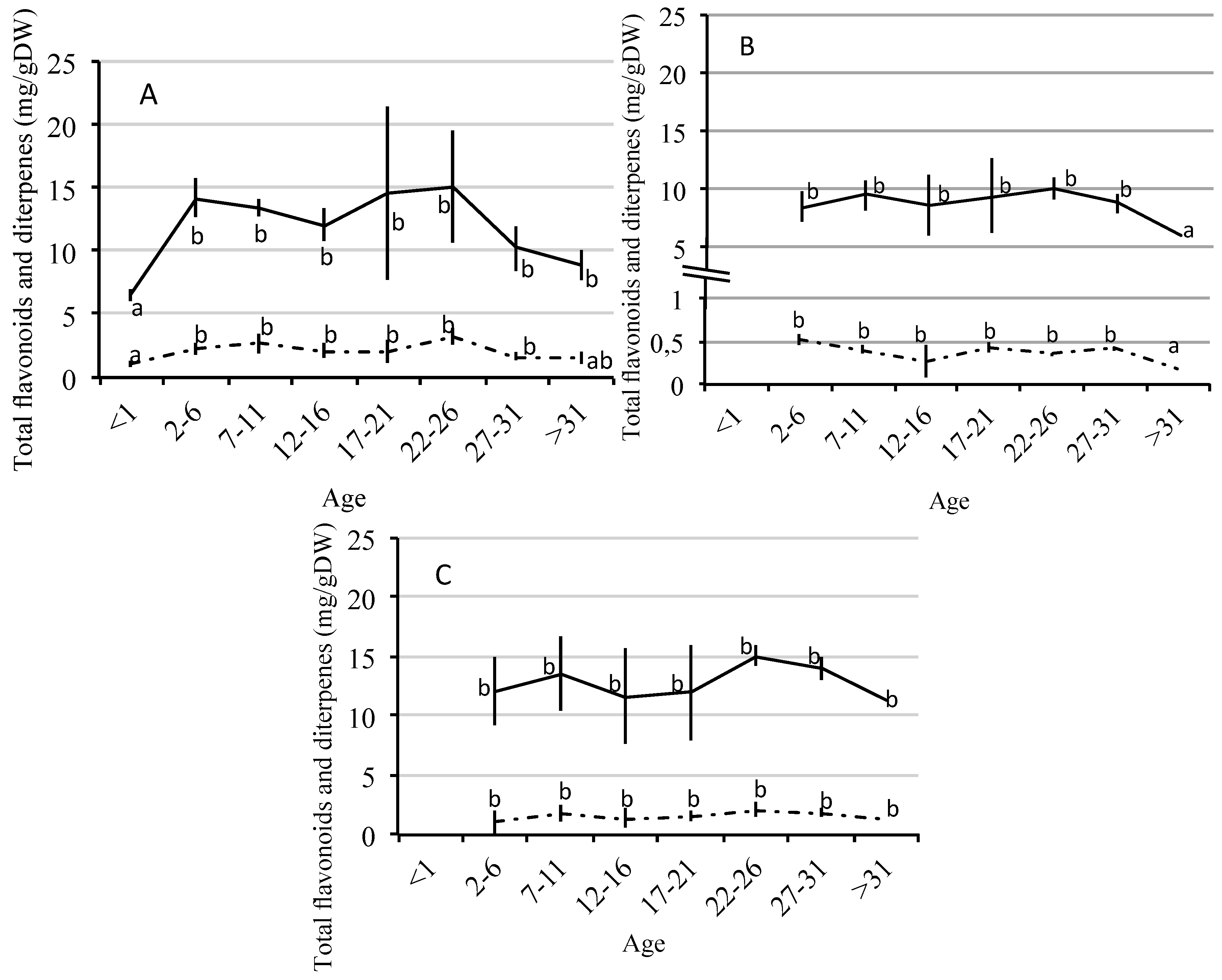