This article evokes the futuristic visions of two giants, one a writer, Jules Verne, who foresaw water as the coal of the future, and the other a scientist, Giacomo Ciamician, who foresaw the utilization of solar energy as an energy source with which to drive photochemical and photocatalytic reactions for the betterment of mankind. Specifically, we examine briefly the early work of the 1960s and 1970s on the photosplitting of free water and water adsorbed on solid supports, based mostly on metal oxides, from which both hydrogen and oxygen evolve in the expected stoichiometric ratio of 2 to 1. The two oil crises of the 1970s (1973 and 1979) spurred the interest of researchers from various disciplines (photochemistry, photo-catalysis and photoelectrochemistry) in search of a Holy Grail photocatalyst, process, or strategy to achieve efficient water splitting so as to provide an energy source alternative to fossil fuels. Some approaches to the photosplitting of water adsorbed on solid insulators (high bandgap materials; Ebg ≥ 5 eV) and semiconductor photocatalysts (metal oxides) are described from which we deduce that metal oxides with bandgap energies around 5 eV (e.g., ZrO2) are more promising materials to achieve significant water splitting on the basis of quantum yields than narrower bandgap photocatalysts (e.g., TiO2; Ebg ≈ 3.0–3.2 eV), which tend to be relatively inactive by comparison. Although proof of concept of the photosplitting of water has been demonstrated repeatedly in the last four decades, much remains to be done to find the Holy Grail photocatalyst and/or strategy to achieve significant yields of hydrogen. View Full-Text
Keywords: photosplitting of adsorbed water; solid supports; metal oxides; alkali halides; hydrogen evolution photosplitting of adsorbed water; solid supports; metal oxides; alkali halides; hydrogen evolution
►▼ Show Figures 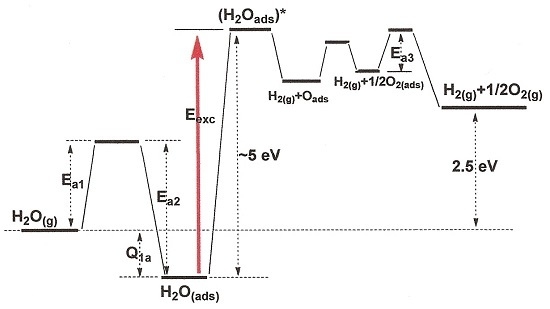