Design, Synthesis and Biological Evaluation of Novel Primaquine-Cinnamic Acid Conjugates of the Amide and Acylsemicarbazide Type

Some aporphine alkaloids, such as crebanine, were found to present arrhythmic activity and also higher toxicity. A series of derivatives were synthesized by using three kinds of aporphine alkaloids (crebanine, isocorydine, and stephanine) as lead compounds. Chemical methods, including ring-opening reaction, bromination, methylation, acetylation, quaternization, and dehydrogenation, were adopted. Nineteen target derivatives were evaluated for their antiarrhythmic potential in the mouse model of ventricular fibrillation (VF), induced by CHCl3, and five of the derivatives were investigated further in the rat model of arrhythmia, induced by BaCl2. Meanwhile, preliminary structure-activity/toxicity relationship analyses were carried out. Significantly, N-acetamidesecocrebanine (1d), three bromo-substituted products of crebanine (2a, 2b, 2c), N-methylcrebanine (2d), and dehydrostephanine (4a) displayed antiarrhythmic effects in the CHCl3-induced model. Among them, 7.5 mg/kg of 2b was able to significantly reduce the incidence of VF induced by CHCl3 (p < 0.05), increase the number of rats that resumed sinus rhythm from arrhythmia, induced by BaCl2 (p < 0.01), and the number of rats that maintained sinus rhythm for more than 20 min (p < 0.01). Therefore, 2b showed remarkably higher antiarrhythmic activity and a lower toxicity (LD50 = 59.62 mg/kg, mice), simultaneously, indicating that 2b could be considered as a promising candidate in the treatment of arrhythmia. Structural-activity analysis suggested that variationsin antiarrhythmic efficacy and toxicity of aporphines were related to the C-1,C-2-methylenedioxy group on ring A, restricted ring B structural conformation, N-quaternization of ring B, levoduction of 6a in ring C, and the 8-, 9-, 10-methoxy groups on ring D on the skeleton. View Full-Text
Keywords: aporphine derivatives; antiarrhythmia; 10,11-dibromocrebanine; 3-bromocrebanine; crebanine; stephanine aporphine derivatives; antiarrhythmia; 10,11-dibromocrebanine; 3-bromocrebanine; crebanine; stephanine
►▼ Show Figures 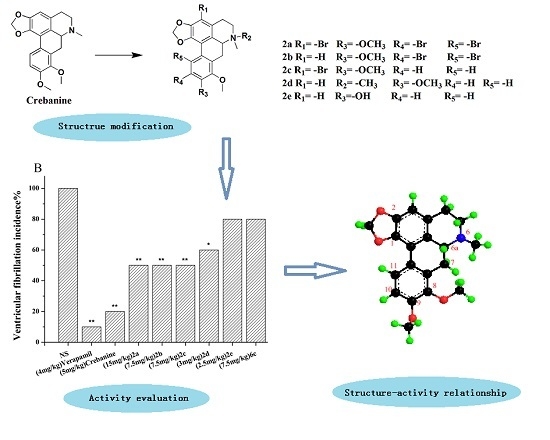