Duchenne Muscular Dystrophy: From Diagnosis to Therapy
Next Article in Special Issue

Phenolics and Polyphenolics from Melastomataceae Species

Propolis is commercialized in Chile as an antimicrobial agent. It is obtained mainly from central and southern Chile, but is used for the same purposes regardless of its origin. To compare the antimicrobial effect, the total phenolic (TP), the total flavonoid (TF) content and the phenolic composition, 19 samples were collected in the main production centers in the Región del Maule, Chile. Samples were extracted with MeOH and assessed for antimicrobial activity against Gram (+) and Gram (−) bacteria. TP and TF content, antioxidant activity by the DPPH, FRAP and TEAC methods were also determined. Sample composition was assessed by HPLD-DAD-ESI-MS/MS. Differential compounds in the samples were isolated and characterized. The antimicrobial effect of the samples showed MICs ranging from 31.5 to > 1000 µg/mL. Propolis from the central valley was more effective as antibacterial than those from the coastal area or Andean slopes. The samples considered of interest (MIC ≤ 62.5 µg/mL) showed effect on Escherichia coli, Pseudomonas sp., Yersinia enterocolitica and Salmonella enteritidis. Two new diarylheptanoids, a diterpene, the flavonoids pinocembrin and chrysin were isolated and elucidated by spectroscopic and spectrometric means. Some 29 compounds were dereplicated by HPLC-MS and tentatively identified, including nine flavones/flavonol derivatives, one flavanone, eight dihydroflavonols and nine phenyl-propanoids. Propolis from the Región del Maule showed large variation in antimicrobial effect, antioxidant activity and composition. So far the presence of diarylheptanoids in samples from the coastal area of central Chile can be considered as a marker of a new type of propolis. View Full-Text
Keywords: propolis; antimicrobial; phenolics; flavonoids; diarylheptanoids; poilaneic acid propolis; antimicrobial; phenolics; flavonoids; diarylheptanoids; poilaneic acid
►▼ Show Figures 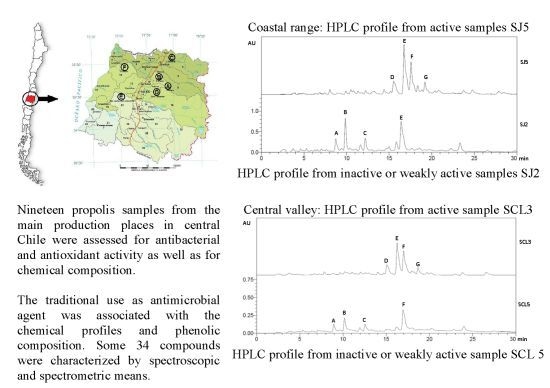