Five New Alkaloids from the Stem Bark of Daphniphyllum macropodum

Although fucoidan has been shown to exert anticancer activity against several types of cancer cell lines, no reports have explored fucoidan-affected cell growth in human urinary bladder cancer cells. In this study, we investigated the anti-proliferative effects of fucoidan in human bladder cancer T24 cells. Our results indicated that fucoidan decreased the viability of T24 cells through the induction of G1 arrest and apoptosis. Fucoidan-induced G1 arrest is associated with the enhanced expression of the Cdk inhibitor p21WAF1/CIP1 and dephosphorylation of the pRB along with enhanced binding of p21 to Cdk4/6 as well as pRB to the transcription factor E2Fs. Further investigations showed the loss of mitochondrial membrane potential and the release of cytochrome c from mitochondria to cytosol, proving mitochondrial dysfunction upon fucoidan treatment with a corresponding increase in the Bax/Bcl-2 expression ratio. Fucoidan-triggered apoptosis was also accompanied by the up-regulation of Fas and truncated Bid as well as the sequential activation of caspase-8. Furthermore, a significant increased activation of caspase-9/-3 was detected in response to fucoidan treatment with the decreased expression of IAPs and degradation of PARP, whereas a pan-caspase inhibitor significantly suppressed apoptosis and rescued the cell viability reduction. In conclusion, these observations suggest that fucoidan attenuates G1-S phase cell cycle progression and serves as an important mediator of crosstalk between caspase-dependent intrinsic and extrinsic apoptotic pathways in T24 cells. View Full-Text
Keywords: fucoidan; bladder cancer; G1 arrest; apoptosis; p21; caspase; tBid fucoidan; bladder cancer; G1 arrest; apoptosis; p21; caspase; tBid
►▼ Show Figures 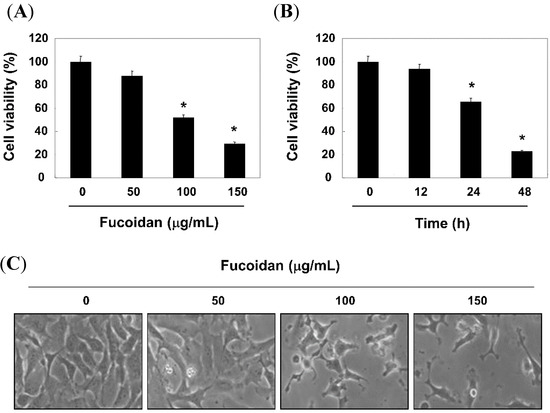