Effect of Salicylic Acid and Structurally Related Compounds in the Accumulation of Phytoalexins in Cotyledons of Common Bean (Phaseolus vulgaris L.) Cultivars

In the present work, isoflavonoid phytoalexin production in response to the application of salicylic acid in cotyledons of four common bean (Phaseolus vulgaris) cultivars (SA) was evaluated. The time-course and dose-response profiles of the induction process were established by quantifying the isoflavonoids by HPLC. Cotyledons of anthracnose-resistant cultivars induced by SA produced substantially higher phytoalexin contents as compared to the susceptible ones. In addition, maximum levels of phytoalexins (50–100 fold increases) were reached between 96 and 144 h, and when a concentration of SA from 3.62 to 14.50 mM was used. The observations also indicate that there was a relatively good correlation between the phytoalexin contents and the inhibitory effect against C. lindemuthianum; the higher antifungal activity was observed during the first 48 hours for extracts from cotyledons treated with SA at 1.45 and 3.62 mM, and between 96 and 144 h after induction. Finally, compounds structurally related to SA (dihydro-quinazolinones and some imines) showed a strong elicitor effect. Moreover, induced extracts from cotyledons treated with these potential elicitors, besides the properly elicitors, displayed a weak to moderated antifungal activity. These compounds may be considered good candidates for developing of new phytoprotectants. Furthermore, phytoalexin-eliciting substances may contribute for selecting disease resistant cultivars. View Full-Text
Keywords: cultivars; elicitor; phaseollin; dose-response profiles; Colletotrichum lindemuthianum; antifungal activity; dihydro-quinazolinones cultivars; elicitor; phaseollin; dose-response profiles; Colletotrichum lindemuthianum; antifungal activity; dihydro-quinazolinones
►▼ Show Figures 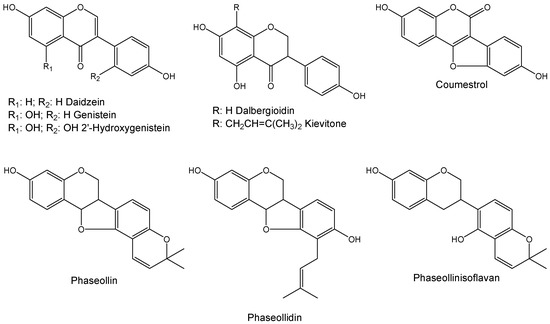