It is well known that overwhelming neutrophil activation is closely related to acute and chronic inflammatory injuries. Formyl peptide receptor 1 (FPR1) plays an important role in activation of neutrophils and may represent a potent therapeutic target in inflammatory diseases. In the present study, we demonstrated that IA-LBI07-1 (IA), an extract of bioactive secondary metabolites from a marine Bacillus sp., has anti-inflammatory effects in human neutrophils. IA significantly inhibited superoxide generation and elastase release in formyl-L-methionyl-L-leucyl-L-phenylalanine (FMLP)-activated neutrophils, but failed to suppress the cell responses activated by non-FPR1 agonists. IA did not alter superoxide production and elastase activity in cell-free systems. IA also attenuated the downstream signaling from FPR1, such as the Ca2+, MAP kinases and AKT pathways. In addition, IA inhibited the binding of N-formyl-Nle-Leu-Phe-Nle-Tyr-Lys-fluorescein, a fluorescent analogue of FMLP, to FPR1 in human neutrophils and FPR1-transfected HEK293 cells. Taken together, these results show that the anti-inflammatory effects of IA in human neutrophils are through the inhibition of FPR1. Also, our data suggest that IA may have therapeutic potential to decrease tissue damage induced by human neutrophils.
Keywords: elastase; formyl peptide receptor; Bacillus sp.; neutrophil; superoxide elastase; formyl peptide receptor; Bacillus sp.; neutrophil; superoxide

Neutrophils play an important role in host defense systems against pathogen invasion and to clear damaged tissues [1]. However, there is growing evidence showing that overwhelming activation of neutrophils may become destructive and induce several inflammatory diseases, such as acute coronary syndrome, sepsis and acute respiratory distress syndrome [2,3]. For example, reactive oxygen species generated from activated neutrophils not only destroy pathogens, but also directly or indirectly damage surrounding tissues [4]. Therefore, the attenuation of neutrophil activation is a critical step to treat inflammatory diseases.
Formyl peptide receptor 1 (FPR1) is one of pattern recognition receptors which guide neutrophils to inflammatory sites and mediate downstream signaling pathways in the regulation of immune responses [5]. FPR1 can recognize bacterial or mitochondrial N-formyl peptides and has been shown to mediate either infectious inflammation or sterile inflammation [6,7]. Previous studies demonstrated that activation of FPR1 on neutrophils induces severe inflammatory response syndrome and organ damage [8,9]. Concerns have been suggested that the pharmacologic potential of FPR1 as a therapeutic target for the development of new drugs to treat inflammatory diseases [10].
There are increasing numbers of natural products in clinical development as therapeutic agents for the treatment of human diseases, especially from the marine ecosystem [11]. A number of secondary metabolites from marine organisms have been shown to display potential pharmacological activities, such as anti-inflammatory, bactericidal, and antiviral effects [12,13]. In the present study, our data suggest that IA-LBI07-1 (IA), an extract of bioactive secondary metabolites from a marine Bacillus sp., inhibits superoxide generation and elastase release in formyl-L-methionyl-L-leucyl-L-phenylalanine (FMLP)-activated human neutrophils through binding to FPR1.

There is growing evidence showing that overwhelming activation of neutrophils induces tissue destruction and organ dysfunction [14]. To investigate whether IA alters neutrophil functions, superoxide generation and elastase release from activated neutrophils were measured. Figure 1A shows that IA (0.3–3 μg/mL) had a dose dependent inhibitory effect on superoxide generation in FMLP (FPR1 agonist)-activated neutrophils. The 50% inhibitory concentration (IC50) of IA was 1.05 ± 0.29 μg/mL. Furthermore, IA also reduced elastase release in FMLP-activated neutrophils in a dose dependent manner with an IC50 value of 0.57 ± 0.09 μg/mL (Figure 1B).
In contrast, IA failed to alter neutrophil functions in Leu-Glu-Ser-Ile-Phe-Arg-Ser-Leu-Leu-Phe-Arg-Val-Met (MMK-1, FPR2 agonist)- and phorbol myristate acetate (PMA, protein kinase C activator)-activated neutrophils (Figure 1C,D). In addition, IA (0.3–3 μg/mL) did not cause the release of lactate dehydrogenase (LDH), suggesting that inhibition of the neutrophils’ respiratory burst and degranulation by IA was not attributable to cytotoxicity (data not shown). These data indicate that IA specifically inhibits respiratory burst and degranulation of FMLP-activated neutrophils.

2.2. IA Does not Show Inhibition in Cell-Free Systems 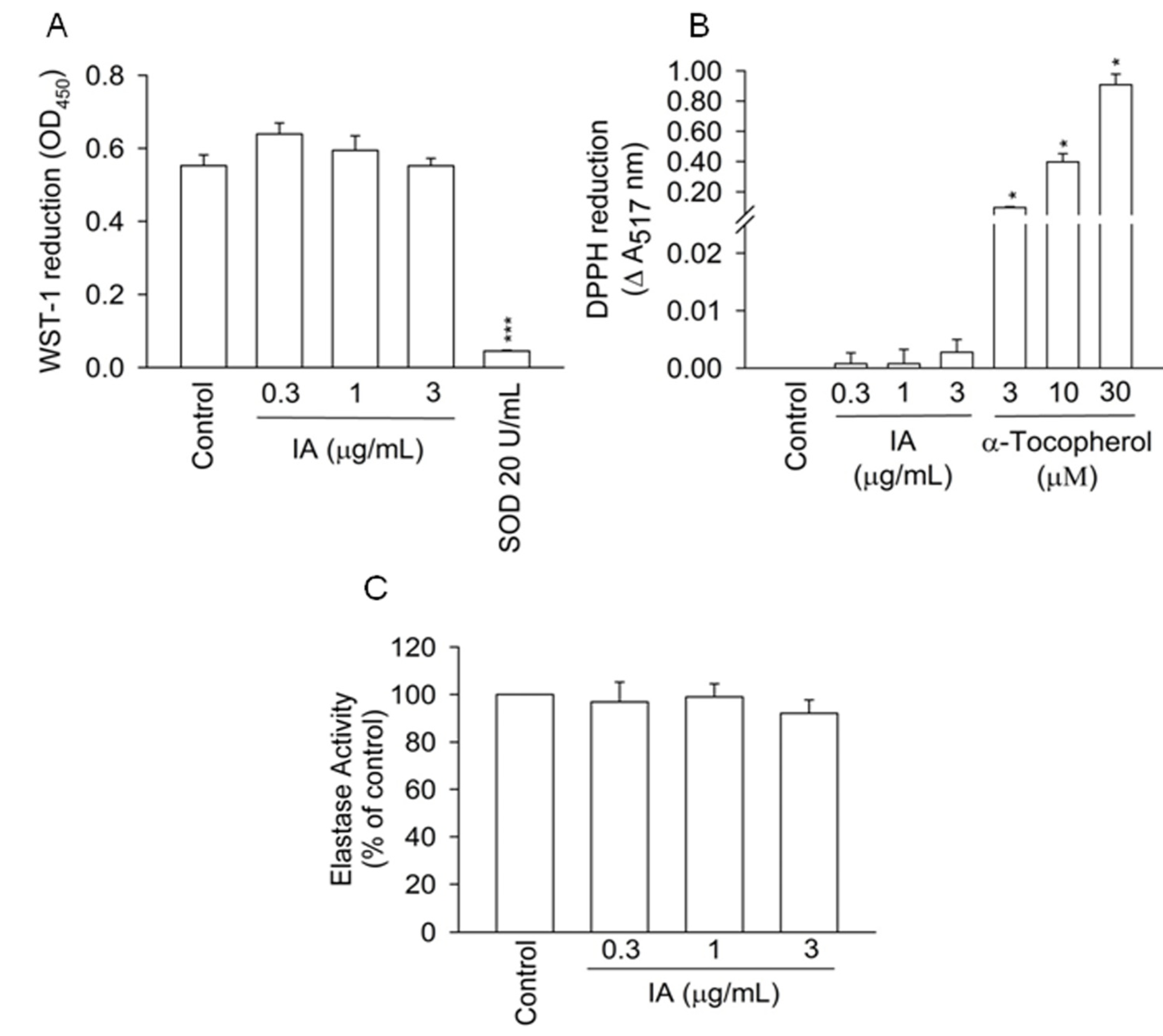 2.3. Protein Kinase A (PKA) Pathway Does not Mediate the Inhibitory Effects of IA

Previous studies showed that an increase in intracellular cAMP levels and subsequent activation of PKA are associated with the inhibition of multiple intracellular activities, including the respiratory burst and the degranulation of neutrophils [15,16]. In the following experiments, we investigated whether the cAMP/PKA pathway is involved in the inhibitory effects of IA. H89 (3 μM), a PKA inhibitor, failed to reverse the inhibitory effects of IA on superoxide generation and elastase release in activated cells (Figure 3A,B). 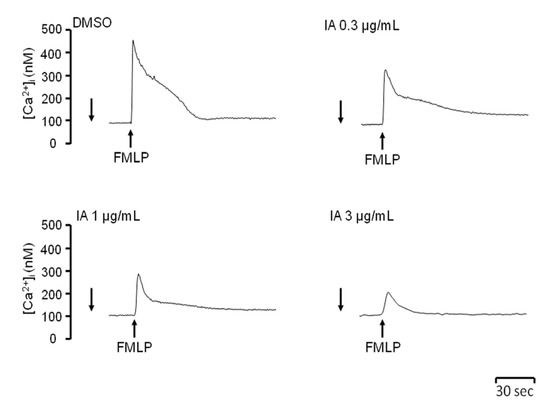 2.6. IA Inhibits the Binding of N-Formyl-Nle-Leu-Phe-Nle-Tyr-Lys-fluorescein (FNLFNYK) in Human Neutrophils 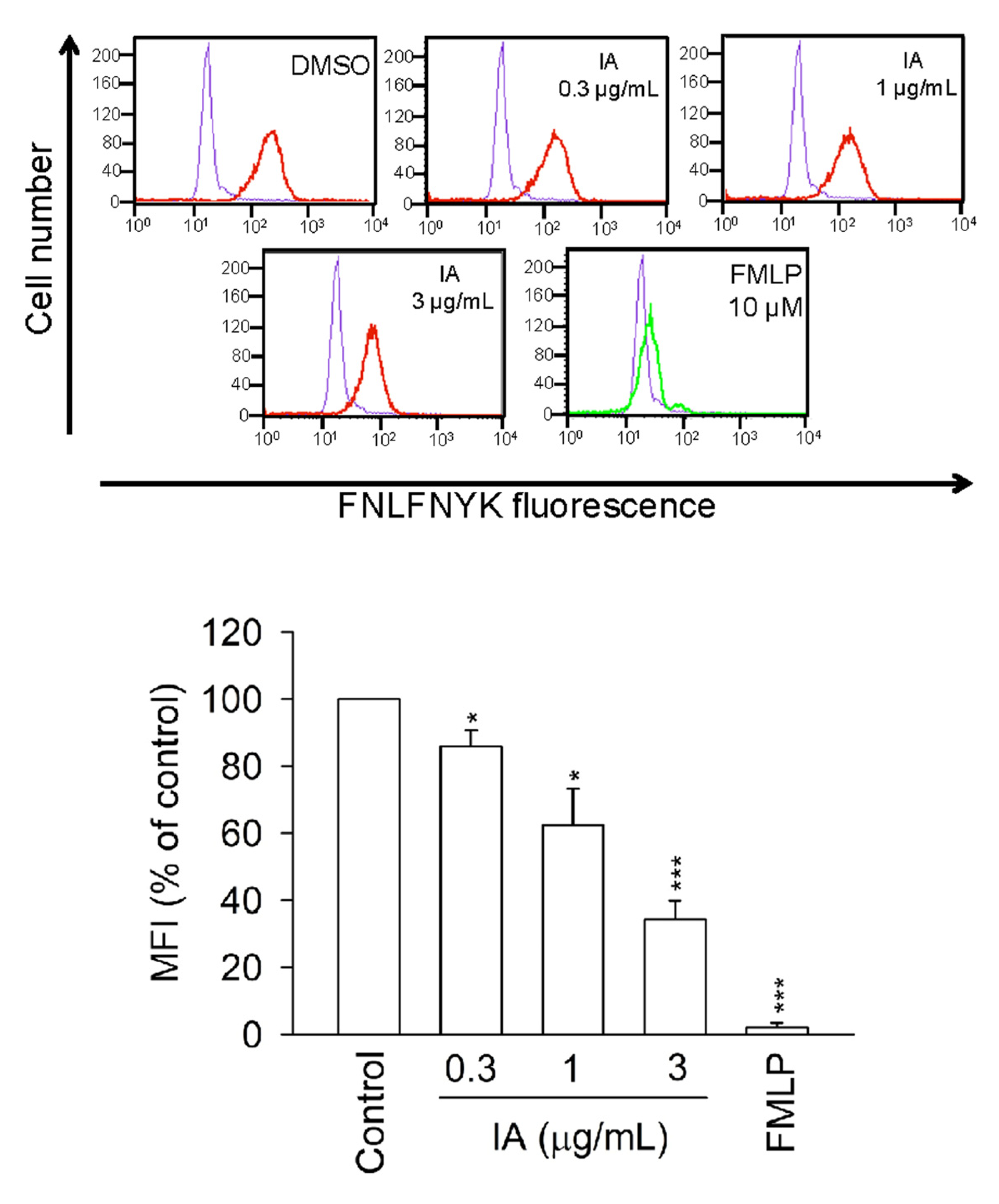 2.7. IA Inhibits the Binding of FNLFNYK in HEK293 Cells Transfected with FPR1 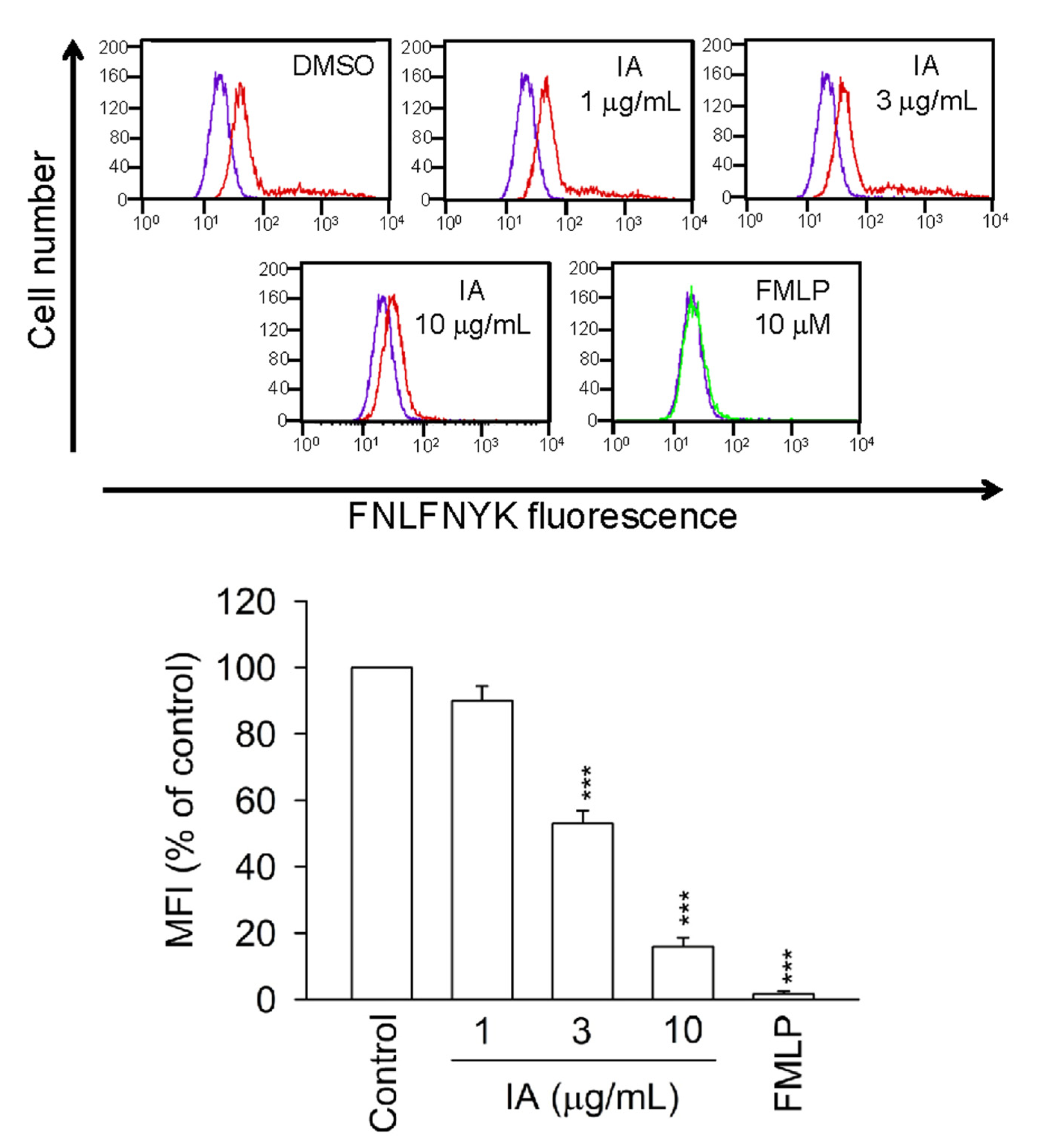 2.8. The High Performance Liquid Chromatography (HPLC) Method Used for Identification of the Composition of IA

Through a series of experiments, we found the acetonitrile/water elution solvent was a good mobile phase. A photodiode array detector was used to determine the optimized conditions for the IA extract in the chromatogram. In a full-scan experiment, the detector wavelength at 260 nm showed better separation than other wavelengths. The HPLC fingerprint (Figure 8) showed a group of peaks at polar fraction (2.5–7.5 min RT, elution solvent: 2% CH3CN) and a significant peak at non-polar fraction (30.9 min RT, elution solvent: 100% CH3CN), which was specific enough to be used for the identification of IA. 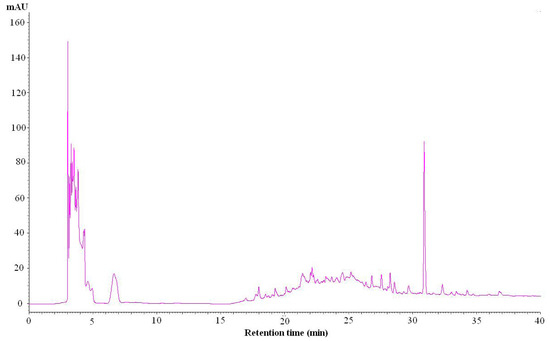 Blood were collected from healthy volunteers via venipuncture according to the standard protocol approved by the local institutional review board. Neutrophils were isolated from peripheral blood according to the method of dextran sedimentation, followed by centrifugation in a Ficoll Hypaque gradient and the hypotonic lysis of the erythrocytes [19]. The purified neutrophils contained > 98% viable cells, as determined by Trypan blue exclusion, and were suspended in calcium-free Hank's balanced salt solution (HBSS) at 4 °C before used.

HEK293 cells were maintained in DMEM supplemented with 10% FBS, 2 mmol/L glutamine, and antibiotics. According to the manufacturer’s instruction, HEK293 cells were stably transfected with the human FPR1 gene. After transfection, cells were cultured in the medium containing G418 (2 mg/mL). G418-resistant clones were used for further studies [20].

The bacterial strain SLI-07-01 was isolated from marine sediment collected at Siaolanyu Isle of Taiwan. This strain was identified by 16S rDNA analysis as a Bacillus sp.. The 16S rDNA sequence of SLI-07-01 was deposited in the NCBI Genbank under accession number KC865053. It was maintained on M1 agar (10 g starch, 4 g yeast extract, 2 g peptone, 0.5 L seawater, 0.5 L dH2O, and 15 g agar) at 25 °C in Petri dishes [21]. The cultivation of IA was carried out aerobically in 2 L flasks containing 1,000 mL M1 medium with 50% seawater. Flasks were incubated at 25 °C on a rotatory shaker at 150 rpm. After five days of incubation, the fermented broths were extracted twice with ethyl acetate. The solvent extracts were combined and evaporated to dryness under vacuum. The extracts obtained were weighed and stored at −20 °C. A voucher specimen (SF-SLI-07-01) was deposited in the herbarium of National Museum of Marine Biology & Aquarium. The extracts were then used for activity assays.

The measurement of superoxide generated by the activated neutrophils was dependent on the reduction of ferricytochrome c. In addition, Methoxysuccinyl-Ala-Ala-Pro-Val-p-nitroanilide was used as the elastase substrate to detect elastase release [15]. Briefly, neutrophils were mixed with ferricytochrome c or the elastase substrate at 37 °C, and then treated with testing drugs for 5 min. FMLP (30 nM) or MMK-1 (100 nM) in the pretreatment of cytochalasin B as well as PMA (5 nM) were added to activate neutrophils. The change in absorbance was monitored continuously at 550 and 405 nm, respectively, in a spectrophotometer (U-3010, Hitachi, Tokyo, Japan). Calculation was based on the statement from a previous study [22].

The superoxide-scavenging effect of testing drugs was determined in a cell-free xanthine/xanthine oxidase system. The assay buffer contained 50 mM Tris (pH 7.4), 0.3 mM WST-1, and 0.02 U/mL xanthine oxidase, and testing drugs. After 0.1 mM xanthine was added to the assay buffer at 30 °C, the absorbance related to the reduction of WST-1 by superoxide was measured at 450 nm. In addition, an ethanol solution of the stable nitrogen-centered free radical, DPPH (100 μM), was incubated with testing drugs, and the absorbance was measured at 517 nm.

FNLFNYK, a fluorescent analogue of FMLP, was used for receptor binding by the fluorescence-activated cell sorting scan analysis. Neutrophils were incubated with testing drugs at 4 °C and labeled with FNLFNYK for 30 min, followed by analysis with flow cytometry [23,24].

Neutrophils were labeled with Fluo-3/AM (2 µM) at 37 °C. The cytoplasmic calcium levels were measured in a quartz cuvette with a thermostat undergoing continuous stirring by a Hitachi F-4500 spectrofluorometer. The excitation wavelength was 488 nm and the emission wavelength was 520 nm. After cells were treated with testing drugs, stimulants were added in the presence of 1 mM Ca2+ to increase [Ca2+]i. [Ca2+]i was calculated from the fluorescence intensity, as follows: [Ca2+]i = Kd × [(F − Fmin)/(Fmax − F)]; where F is the observed fluorescence intensity, Fmax and Fmin were obtained by the addition to the neutrophils of 0.05% Triton X-100 and 20 mM EGTA, respectively, and Kd was taken to be 400 nM.

Neutrophils were incubated with testing drugs and stimulated with FMLP (30 nM) at 30 and 60 sec, followed by mixing with sample buffer for 15 min at 100 °C. The reaction was terminated by placing the cells on ice. After centrifugation at 14,000 × g for 20 minutes at 4 °C and removal of the supernatant, whole-cell lysates were yielded. The lysates were used for Western blotting analysis. Sodium dodecyl sulfate-polyacrylamide gel electrophoresis with 12% polyacrylamide gels was used to separate the proteins. The samples were then blotted onto nitrocellulose membranes. Immunoblotting was performed with the indicated antibodies and horseradish peroxidase (HRP)-conjugated secondary anti-rabbit antibodies (Cell Signaling Technology, Beverly, MA, USA). The immunoreactive bands were visualized by an enhanced chemiluminescence system (Amersham Biosciences, Piscataway, NJ, USA). The intensities of the reactive bands were analyzed using UVP Biospectrum (UVP, LLC Upland, CA, USA).

All experiments were performed at least 3 times and the results are expressed as means ± standard errors of the means (SEM). The statistical analyses were based on ANOVA analysis or Student’s t-test, and all calculations were performed with SigmaPlot (Systat Software, San Jose, CA, USA). A value of p < 0.05 was considered statistically significant.

In the present study, we showed that IA, an extract of bioactive secondary metabolites from a marine Bacillus sp., exerted anti-inflammatory effects. These results demonstrated that IA inhibited respiratory burst and degranulation specifically in FMLP-activated neutrophils. IA significantly attenuated the downstream signaling pathways of FPR1, including the Ca2+, MAP kinases, and AKT pathways. Furthermore, IA inhibited the binding of the FMLP analog to FPR1. Taken together, IA may act as an inhibitor of FPR1. Activation of neutrophils by FPR1 has been proven to be involved in the progress of inflammatory diseases [25]. Therefore, FPR1 has therapeutic potential as a pharmacological target to develop new anti-inflammatory drugs and in conclusion, we show that IA may be a potentially new therapeutic agent against neutrophilic inflammatory diseases.