The World Health Organization defines probiotics as live microorganisms conferring a health benefit on the host when administered in adequate amounts. Probiotic bacterial cultures modulate the growth of intestinal microbiota, potentially suppressing harmful bacteria and reinforcing the body’s natural defense mechanisms. There is currently an abundance of evidence on the positive effects of probiotics on human health [1,2,3,4,5]. Probiotics are typically bacteria of the species Lactobacillus or Bifidobacterium [6], which are natural components of the gut microbiota and are thus able to survive in the gut. Among lactic acid bacteria (LAB), members of the genus Lactobacillus are generally regarded as non-pathogenic because of their long history of safe use as health-promoting organisms in numerous fermented food products—e.g., dairy products, fermented vegetables, fish and sausages—as well as silage inoculants [5,7,8]. Lactobacillus rhamnosus (L. rhamnosus) has been shown to produce lactic acid as the only carbohydrate metabolism product [9,10].
Lactic acid was first manufactured on a commercial scale in the United States in 1883 by lactic acid bacterial fermentation of sugar substrates [11]. Lactic acid bacteria of the genus Lactobacillus have been employed in manufacturing lactic acid. A natural organic acid with a long history of application in the food, leather, cosmetic, and pharmaceutical industries [12], lactic acid has also been described as a very effective exfoliating and moisturizing agent [13]. Its application at low concentration (5% v/v) decreases intercorneocyte cohesion and induces skin peeling [14]. Therefore, different concentrations of lactic acid produce different cosmetic results in the epidermis and dermis [15].
In the last few years, LAB were widely distributed in foods due to their beneficial effects on health, such increasing the innate immune response [16], helping to control intestinal infections [17], influencing cholesterol levels [18], antioxidant [19], and anticarcinogenic effects [20]. Some possible mechanisms of action maybe include the production of acid and other by-products of bacterial metabolism in the spent culture supernatant (SCS). For intestinal infections, SCS of the L. rhamnosus GG had been reported to exert antibacterial activity against Salmonella typhimurium [21]. L. fermentum-secreted compounds in SCS inhibit the growth, cytotoxicity and biofilm formation of several S. aureus and P. aeruginosa strains [22]. Three human-isolated Lactobacillus strains show antagonistic activity against ETEC infection in vitro [23]. SCS of L. plantarum 2142 can protect the response of enterocytes to oxidative stress from oxidative injury [24]. Although LAB strains have been shown to have wide applications, LAB culture filtrates are usually discarded and have not been studied in detail. There are no reports on the application of L. rhamnosus culture filtrate for use in cosmetic skin care products. The objective of this study was to investigate the effectiveness of L. rhamnosus spent culture supernatant (Lr-SCS) in cosmetics, with the aim of developing a possible new green cosmetic material.

Qian et al. [25] showed that milk fermented with Lactobacillus delbrueckii ssp. bulgaricus LB340, after centrifugation and ultrafiltration, yielded peptides in the 3-5 kDa range that exhibited good antioxidant activity. Liu and Pan [26] indicated that heat-killed cells of Lactobacillus acidophilus BCRC 14079 exhibit high total antioxidant activity, which is probably related to a Maillard reaction, a reaction between sugar and amino acid in LAB culture after heating. Numerous research studies have focused on Maillard reaction products that may have some antioxidant properties, i.e., clearance of hydroxyl radicals, clearance of hydrogen peroxide, and reduction of lipid peroxidation [27,28,29]. Liu et al. [30] demonstrated that Lactobacillus exopolysaccharides had antioxidant properties such as DPPH radical scavenging activity, chelation of ferrous ions, and reducing power in vitro. We speculate that the source of antioxidant activity in our study may similarly result from heat-stable peptides and/or Maillard-reaction products. 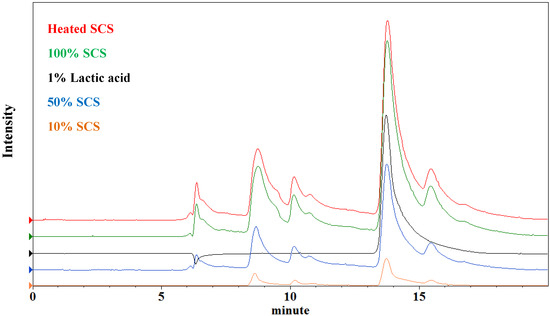 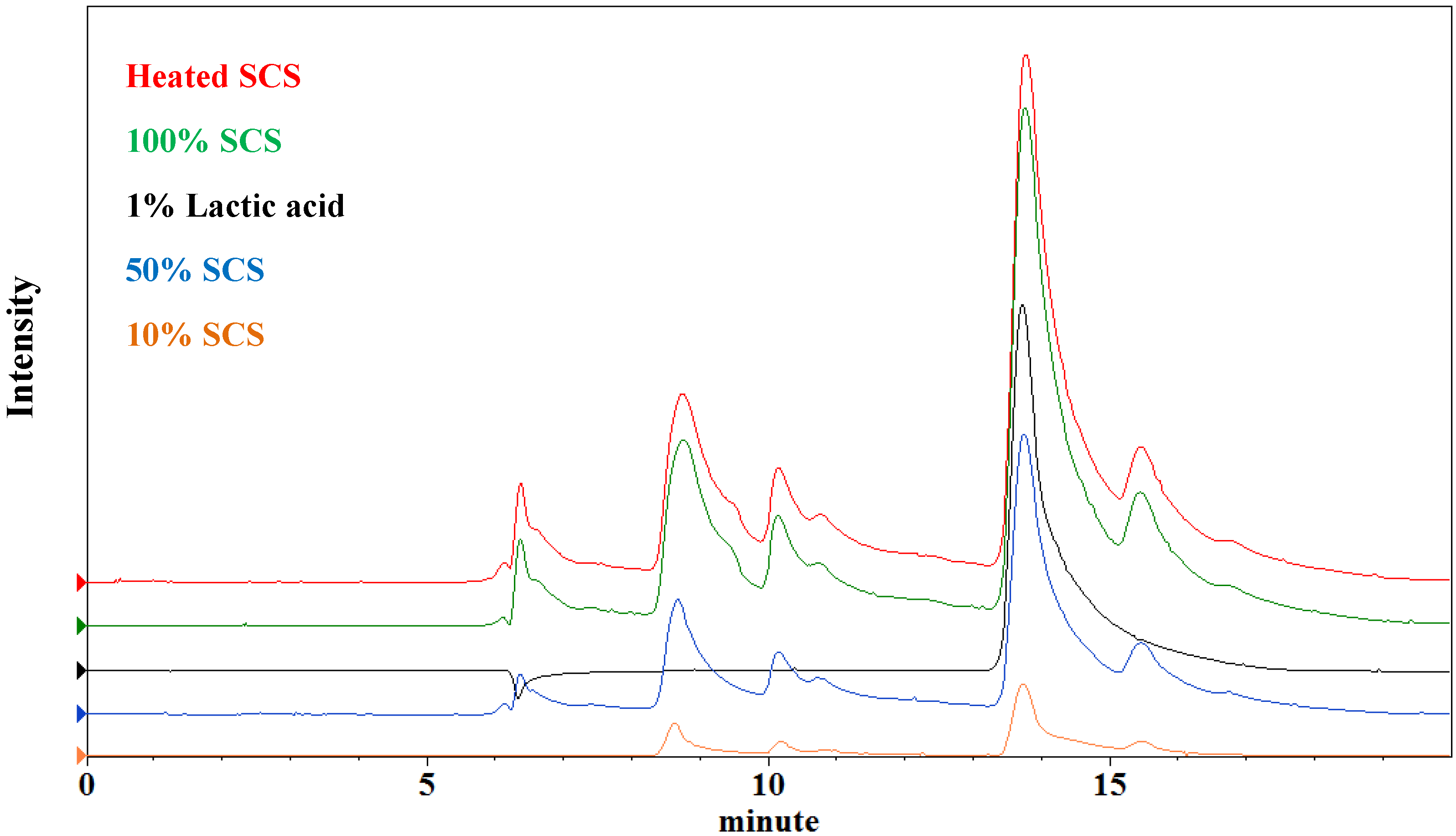 The ABTS+• scavenging capacity assay was carried out using the procedure described in Erkan’s method [33]. In brief, ABTS+• was produced by reacting 7 mM ABTS with 2.45 mM potassium persulfate in the dark for 16 hours at 26 °C. A 10-μL Lr-SCS sample was added to 2 mL ABTS+• radical solution, allowed to react for 10 min, and the absorbance was measured at 734 nm. The ABTS+• scavenging capacity of the sample was compared with that of Trolox (6-hydroxy-2,5,7,8-tetramethylchroman-2-carboxylic acid), which is a vitamin E derivative with potent antioxidant properties and commonly used as a standard or positive control in antioxidant assays. ABTS+• scavenging activity was calculated using the formula: ABTS+• scavenging activity (%) = (1 − Asample/Ablank) × 100, where A is the absorbance at 734 nm.

Tyrosinase inhibitory activity was measured using the method described by Jo [35]. An aqueous solution of mushroom tyrosinase (2 μL, 2 units) was added to a 96-well microplate, following by a mixture (120 μL) containing 5 mM L-dopa dissolved in 67 mM phosphate buffer (pH 6.8) and a Lr-SCS sample (20 μL). The assay mixture was incubated for 30 minutes at 37 °C. Following incubation, the amount of dopachrome produced in the reaction mixture was determined by spectrophotometric analysis at 490 nm. In this study, kojic acid (10 and 2 mM) was used as a standard. Percent inhibition of tyrosinase activity was calculated using the formula: Inhibition (%) = (1 − ODsample/ODblank) × 100, where OD is optical density at 490 nm.

The weight loss of a sample was used for evaluation of moisture retention. A Lr-SCS sample (900 µL) was placed in a glass tube and transferred for 96 hours to an oven with constant temperature and humidity (50 °C, 60% relative humidity). The weights before (W0) and after (Wt) the incubation were recorded by an electronic balance (XS 225A, Precisa Gravimetrics AG, Dietikon, Switzerland). In this study, glycerin was used as a moisture retention standard because it is a well-known cosmetic ingredient, and it exists in the stratum corneum as a natural endogenous humectant [36]. The moisture retention rate (Rr) was evaluated by the weight loss of the sample: Rr (%) = [1 − (W0,sample − Wt,sample)/(W0,control − Wt,control)] × 100.

This is the first report that has evaluated Lactobacillus rhamnosus spent culture supernatant for cosmetic use. We examined six assays: DPPH scavenging activity, ABTS+• scavenging capacity, reducing power, tyrosinase inhibitory activity, moisture retention, and titratable acidity. Lr-SCS showed dose-dependent increases in lactic acid concentration, antioxidant activity, inhibitory tyrosinase synthesis, and moisture retention. Heat treatment did not destroy the active components of Lr-SCS for these assays. In the future, we will further analyze the active components in Lr-SCS and elucidate the antioxidant and whitening mechanisms for skin care cosmetics.